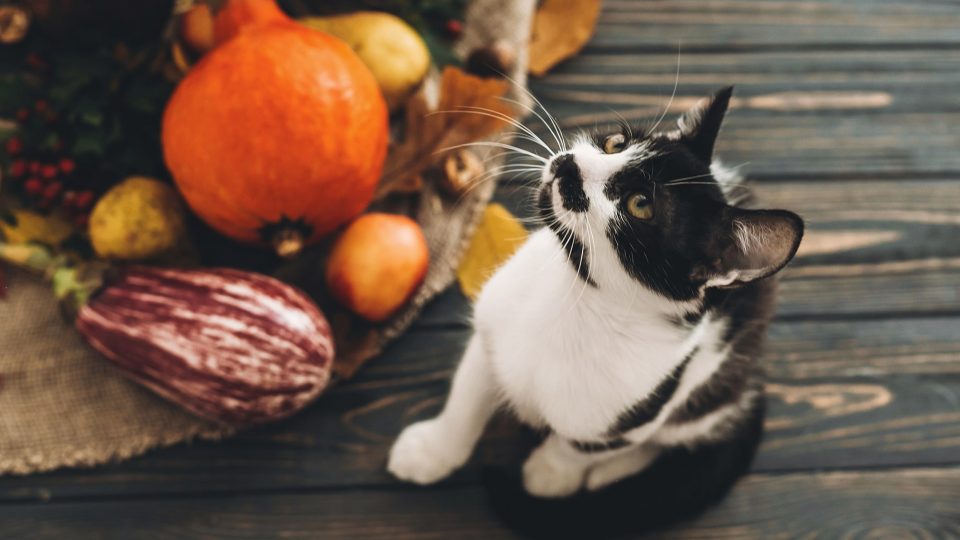 From pumpkin pie and turkey to eggnog and wine, everyone loves holiday food! But what’s safe for us humans isn’t always the same for our pets, so we made a list of some of the most common foods of the holiday season, and then checked it twice to round up these human foods cats can eat (if they were to get their paws on them).

Find out which foods made the naughty list for cats, which ones are nice for them to eat, and some cat-friendly alternatives to keep kitty safe and stuffed, just like you.

Cats are obligate carnivores, so they can have a bite of your turkey, ham, or other protein on the dinner table, right? Not so fast! A cat’s diet should consist of animal-based proteins, but the meat on your table has been basted, braised, rubbed with garlic, stuffed with butter, and sprinkled with herbs, spices, and salt.

Instead, spoil your kitty with one of the many healthy treat options that have limited ingredients and are tailored to a cat’s protein-forward diet. 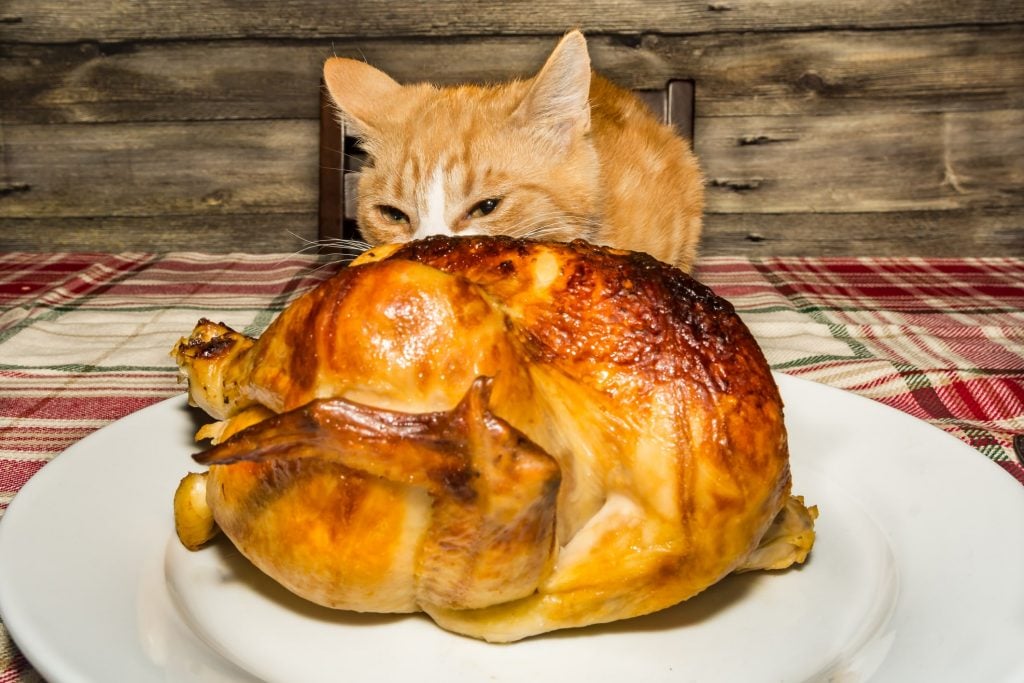 Sharing is not caring when it comes to pumpkin pie and other tasty desserts. Spices commonly found in pie fillings like allspice, cloves, nutmeg, and cinnamon are all toxic to our feline friends. Also on the naughty list of ingredients often found in holiday desserts: sugar or artificial sweetener, milk, and flour.

Instead, try mixing in some pure pumpkin puree into kitty’s kibble. Pumpkin is low in calories and high in fiber, plus the soluble and insoluble fiber found in pumpkin can aid in digestion. For a fun cat-friendly holiday snack, try these Push-Up Pumpkin Cat Treats.

A lick of gravy might sound tantalizing to your cat, but ingesting too much could end in a trip to the vet. The flour used to thicken gravy has no nutritional value and could cause digestive upset. Even worse, your gravy probably contains onions and garlic, two very toxic foods for cats.

Instead, set some bones aside and make a batch of nutritious bone broth for your obligate carnivore. Simply cover the bones in water (skip the addition of any veggies, salt, or spices) and let simmer for a few hours. Once cooled, portions of the bone broth can be added to your cat’s regular meals for a boost of hydration, vitamins, and minerals.

Speaking of bones, never give your pet cooked bones. They could splinter causing choking, cuts in the mouth and throat, and fragments that can get stuck in their intestines.

If your kitty is anything like me, he probably can’t keep his paws off the cheese tray. But unlike humans, cats are generally lactose intolerant. Yep, even though they’ve often been depicted as eagerly lapping up a saucer of milk.

Instead, these “Cheesy” Holiday Cat Treats will have your kitty thinking he’s indulging in a cheesy treat. Shh, don’t tell him these treats are actually grain-, gluten-, and dairy-free and packed with essential vitamins and minerals. 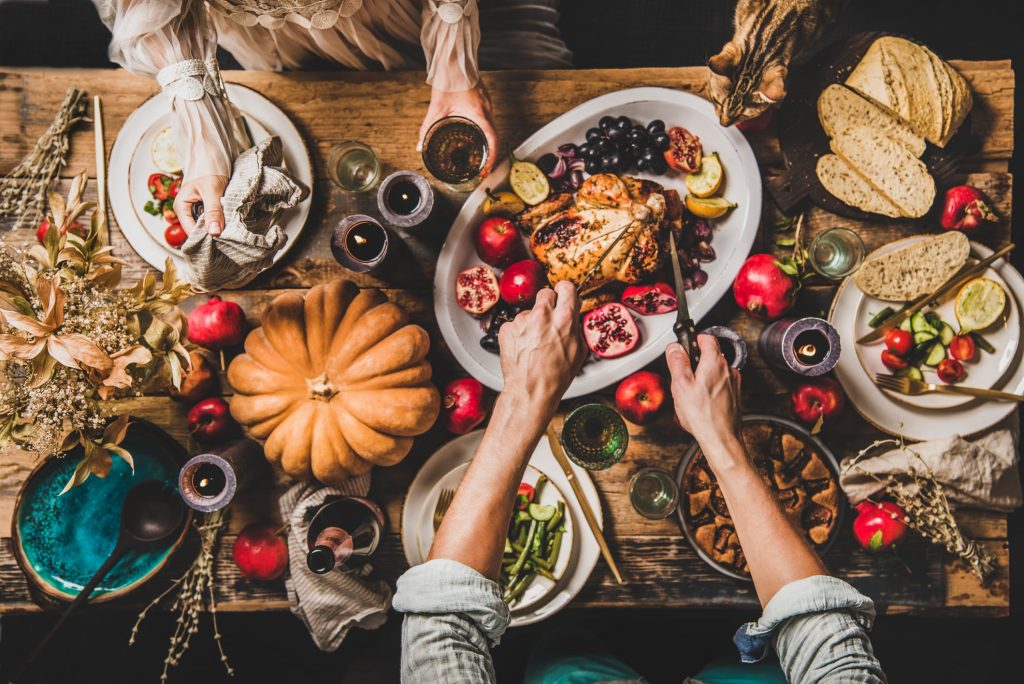 Eggnog is high in fat and made of cow’s milk which contains a large amount of lactose. Not to mention those spices we already mentioned are toxic. Lapping up some eggnog could give your cat an upset stomach, gas, and other gastrointestinal complaints. Eggnog with alcohol? Keep that out of paws reach!

A healthier, more delicious option for your cat is goat milk. With less lactose and fat, goat milk won’t upset your cat’s stomach. PetMD writes that fermented goat milk contains the complete array of amino acids, vitamins, and minerals in the proper proportions for a healthy cat diet. Plus, because of its probiotic properties, goat’s milk can be especially beneficial for pets with IBD (inflammatory bowel disease) and other gastrointestinal issues.

Your kitty’s liver (or any pet) isn’t made to process alcohol. A small amount of any booze could have serious consequences for your companion.

That doesn’t mean that your cat can’t enjoy his own festive drink! Stock up on “cat wine” for the holidays, made with feline-friendly ingredients like fish oil and catnip.

What about fruits and vegetables?

“Fruits are not problematic for cats, although most won’t really eat fruit in any quantity,” says Gary Richter, DVM, Rover Dog People Panelist and owner and medical director of Montclair Veterinary Hospital in Oakland, California. If your cat does want to try some fruit, the ASPCA recommends avoiding all citrus, any form of a grape (fresh or dried), and currants, as they’re all toxic to cats.

When it comes to veggies, there are two common ones your cat should avoid altogether: garlic and onions. We mentioned they are toxic. What we didn’t mention is that in any form (cooked, raw, or powdered) they can damage a cat’s (and dog’s!) red blood cells. A nibble of these veggies will decrease oxygen flow and can lead to anemia, which may cause organ damage.

If your kitty has a hankering for healthy human foods, the ASPCA says these veggies are safe for your cat:

It’s fun to share the holiday cheer with your cat, but keep the season bright by limiting their consumption of human foods from the table. Cats process human foods differently, and what might taste good to us (and them) could be very bad for their health and safety. Instead, try cat-friendly alternatives to keep the holidays fun and safe for the whole fur family. 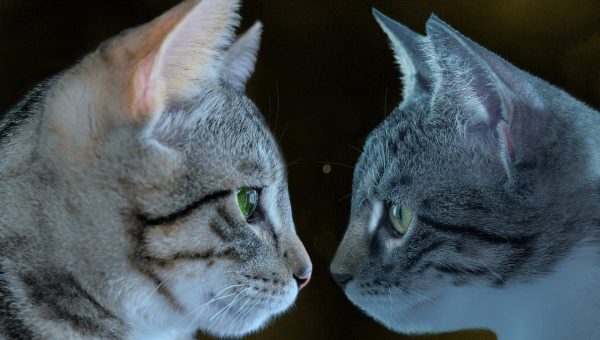 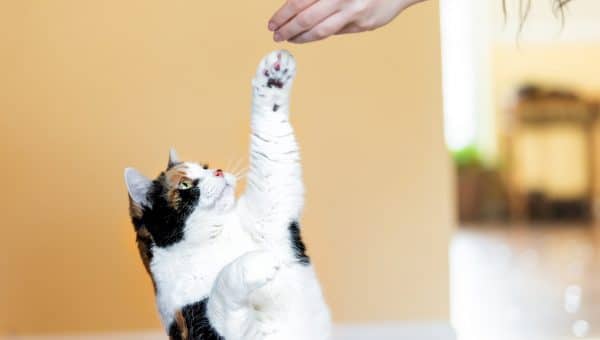 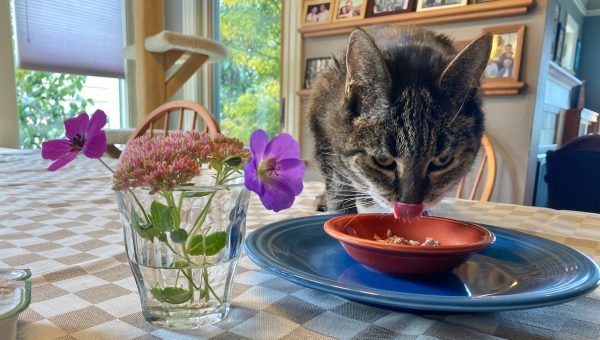