My brother had a cat named Slappy. She loved getting her butt slapped. Slappy cat purred with delight the first time she and I met. She’d rub up against me and gush happy Slappy sounds like there was no tomorrow.

But then tomorrow arrived. And on that tomorrow, Slappy discovered I had dogs.

Slappy was not happy.

Furious at my betrayal, she hissed at me in contempt. I had fraternized with the enemy. There was no going back for her. No forgiveness. Only hisses.

Not all cat hisses are alike. Here are some reasons why your cat might be hissing at you. It may not be what you think. Hint: it’s not about hate.

Reasons cats hiss at you

1. Fear of the unknown

Slappy’s hissing was more intended for my curious dogs than me. At least that’s what I tell myself. Cats can feel threatened by new things in their environment, VetStreet explains. They may express their fear of unfamiliar humans, other pets and objects with aggressive hissing.

What to do: Whether your cat is afraid of you, a human visitor in your home or another pet, PetMD advises giving your cat space. They go on to explain that hissing is a warning sign and if provoked, your cat might attack. Slowly move away and let your cat decide when he or she wants to be near you again.

If it’s an unfamiliar object that’s causing distress, use positive reinforcement techniques to slowly introduce your cat to it.

You can desensitize your cat by gradually exposing him or her to the scary item while simultaneously giving them something they love, like treats or belly rubs. With time and patience, your cat will overcome the fear and stop hissing. 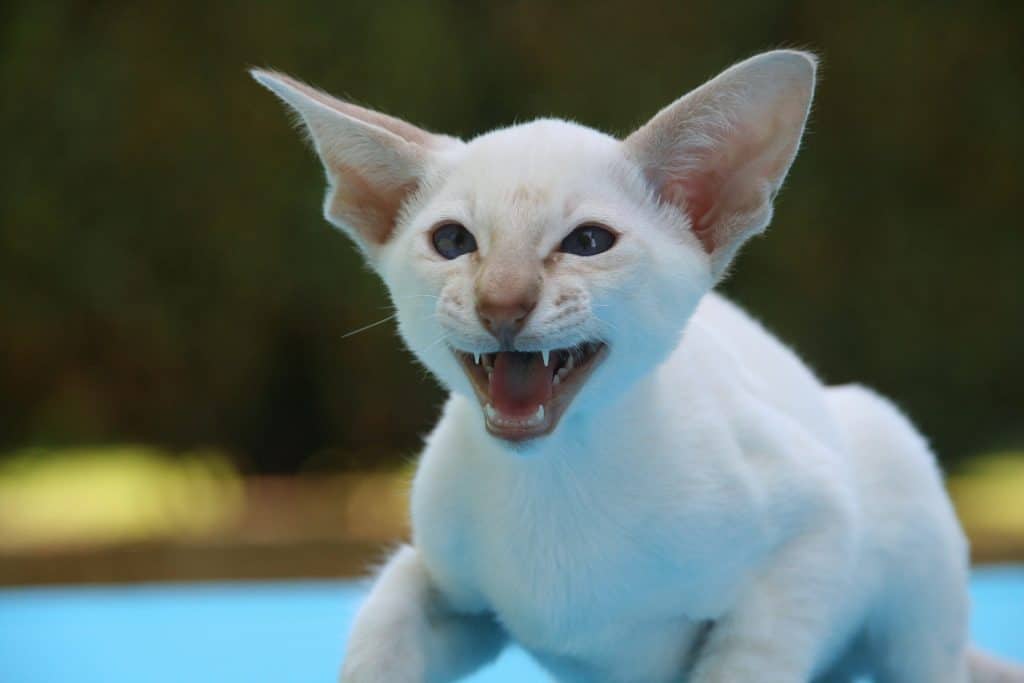 When there’s a disruption to a cat’s environment, they stress. Cats don’t handle stress well, according to PetMD. They prefer to avoid conflict and tend to flee or freeze. But some go into defensive mode and hiss.

Have you ever tried getting your cat inside a pet carrier for a vet visit? This seemingly simple task can be an all-morning adventure.

Moving. That’s a major event that can cause heaps of stress for cats.

Is there construction nearby creating new, loud noises?

Maybe you’re in a rush and moving around quickly and erratically.

These are all things that can disrupt your cat’s sense of normalcy, making him or her feel threatened.

What to do: If you’re not able to remove the stressor from your cat’s surroundings, Pet Health Network offers some diversion tactics.

3. Confrontation with another cat

I witnessed multiple confrontations between two cats in my neighborhood last year. I recorded one of the encounters. It’s in the video below.

Over the course of two months or so, the black cat was coming around and constantly trying to infringe on the gray cat’s territory. Well, it was more like a hostile takeover attempt.

PetMD explains that the hissing cat is often the victim while the staring and stalking cat is the aggressor.

That’s how it played out for these two. Entrapped, the gray cat would crouch with his hair on end, much like in this video, and hiss, while the black cat blocked his escape, glaring and bullying him.

What to do: The noises that came from these two felines freaked me out. At least two times I darted out of my apartment to scare the black cat away and ultimately set the gray cat free.

Without realizing it, my instincts kicked in and I did the right thing. Separating two cats in a confrontation is the best thing to do to prevent the situation from escalating, PetMD advises.

By the way, the confrontations between these two stopped. The black cat stopped coming around and the gray cat is living a happy, peaceful life.

Although it’s not a common reason, hissing could be your cat’s way of communicating they’re in pain. According to PetMD, your cat might hiss when touched in an area that hurts. They also suggest arthritis could be the culprit if your cat hisses when jumping on and off furniture.

What to do: If you suspect your cat’s hissing stems from pain, keep a close eye and watch for these other common behavioral signs of pain:

Visit your veterinarian for an evaluation and conversation about a treatment plan to alleviate the pain your hissing cat is experiencing.

Tes Kurtz is a content marketing writer and author of the book, "Anything Is PAWSible–Impossible Dog Dreams Come True." Passionate about dog rescue and adoption, she networks shelter dogs to help them find forever homes and volunteers for rescue organizations.