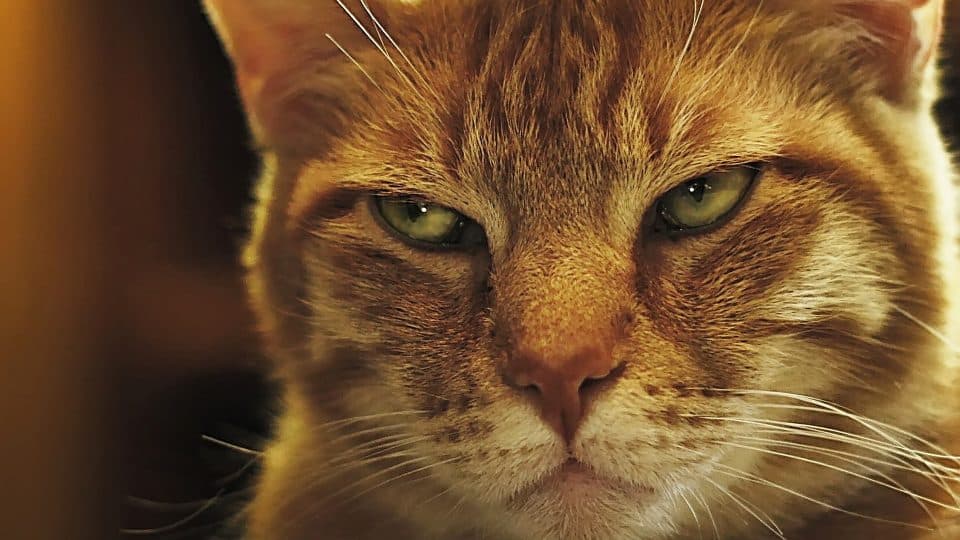 The cats versus cucumbers phenomenon went viral back in 2015. It all started with a video of a cat freaking out when it spotted a cucumber behind it. Many copycat videos emerged, and in the past few years, these feline harassment videos have racked up tens of millions of views on Youtube. 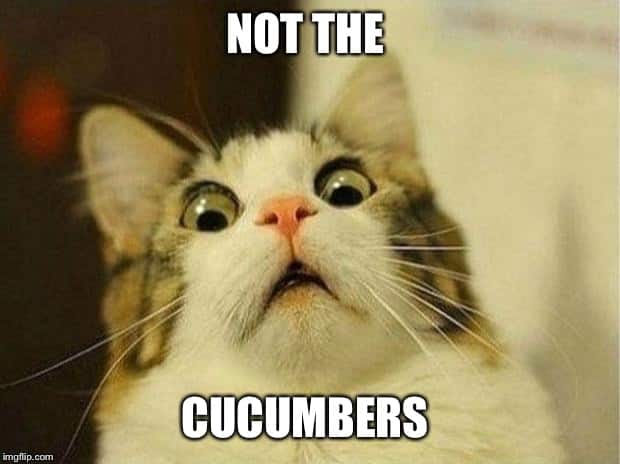 So, why do these now-famous cats nearly jump out of their skin when a cucumber sneaks up behind them? One popular theory is that cats think these sneaky cucumbers are snakes, and they react as they would if they saw a snake in the wild.

Do cats have an innate fear of snakes?

Maybe. Opinions vary among veterinarians and cat behaviorists. Whether you love snakes or fear them, facts are facts—the bite of some snakes can be fatal. When you spot a snake, it’s smart to leap first and ask questions later. Have cats evolved an innate aversion to slithering, legless reptiles?

“If a cat sees something slithering over the ground, the cat often will jump a couple of feet up in the air, a behavior that prevents getting bitten by a snake,” Con Slobodchikoff, animal behaviorist and author of Chasing Doctor Dolittle: Learning the Language of Animals, explained to ABC News.

Slobodchikoff continues, “Cats are genetically hard-wired through instinct to avoid snakes. Cucumbers look enough like a snake to have the cat’s instinctive fear of snakes kick in.”

An instinctive fear of snakes seems logical, since other anti-predator adaptations, like defensive hissing, are common to most species of felines, from lions to house cats. Some cat behaviorists have even suggested that the hiss of a cat sounds like a snake hiss, a clever trick to spark an anti-snake defense reaction in an animal that is harassing a cat.

Recent research has found that humans may also have an inborn fear of snakes. This aligns with a long-standing theory that an anti-predator aversion to snakes might be common to all mammals, but it’s a very hard thing to pin down scientifically.

Although some veterinarians are on board with Slobodchikoff’s explanation, opinion varies as to the cause of this anti-cucumber behavior in cats. Cornell Feline Health Center’s Behaviorist Specialist, Dr. Pamela Perry has her own explanation.

“The cats in the videos may be reacting to the sudden appearance of a novel object,” said Perry. “Cats don’t have a natural fear of snakes.  In fact, a lot of them hunt snakes (I had one such cat who insisted on presenting her prey—still very much alive—at my feet!).”

Dr. Rachel Malamed, DVM, DACVB, told PetMD that she has another interpretation of this cat-pranking trend.

“I wonder how many cats were videotaped before concluding that this is a phenomenon? For example, out of hundreds of cats that have likely now been subjected to this experiment, how many actually had this reaction? Perhaps only a small percentage,” she says. “Just as unusual phobias exist amongst people, this subset of cats may fit that bill, or they were simply startled by the sudden appearance of the object.”

Experts agree on this: scaring your cat isn’t funny

The startle reaction that we see in the cucumber videos is the result of the cat’s fight-or-flight response. Your pet’s nervous system signals a surge of adrenaline as it flies into overdrive to protect her from danger. Repeated exposure to terror-inducing experiences can lead to increased anxiety and related behavioral issues, including aggression and peeing outside of the litter box.

The fear response can also be dangerous for the cat.  She might hurt herself when she flings her body across the room. She could knock something down, upset other animals in the house, and cause general chaos. Importantly, cats are able to associate frightening events with other factors in their surroundings, like their food bowl, the location of the incident, or the person who they live with.

Cats aren’t dummies. I don’t know about you, but if a person who I trust—who usually calls me Princess and scratches my belly—suddenly decides that they’re going to try to startle the bejeezus out of me with a vegetable, I’d be very irked. And I probably wouldn’t trust them around vegetables anymore, or around my belly, for that matter. A peaceful and loving home for your cat should remain free of potentially terrifying hazards, be they animal, vegetable, or mineral.