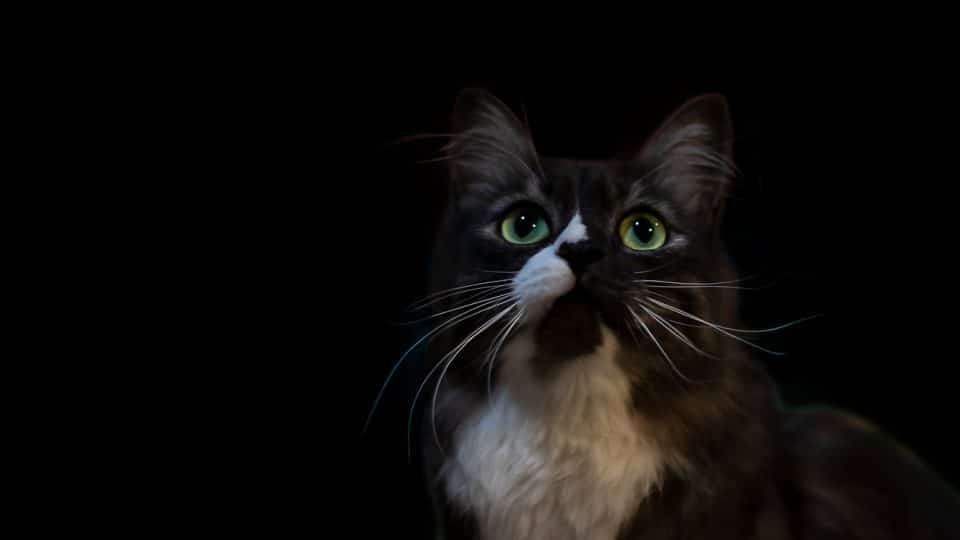 There are a lot of beliefs—or, in many cases, urban legends—surrounding cats. Some of them are true (like their tendency to bring back “souvenirs” back from their hunting trips—and then drop those not-so-alive souvenirs at the foot of their owners) while some of them are pure myth (like black cats somehow being associated with bad luck).

One common belief about felines has to do with their vision—and, in particular, their ability to see in the dark. Many cat owners believe that their pets have night vision and are able to see just as well in the dark at 2 a.m. as they can in the daytime at 2 p.m.

But is that true? Can cats really see in the dark? And, if so, how?

Cats can see in the dark… sort of

So, let’s cut right to the chase: Can cats see in the dark?

Turns out, they can—at least much better than we humans can. “Cats have the ability to pick up on more detail in the dark than humans can,” says Dr. Zay Satchu, chief veterinary officer of Bond Vet, a pet health start-up offering urgent care and walk-in vet clinics across New York City. “This means that in the dark when we look around and can barely make out the structure of our bed moments before we bump into it, cats can very comfortably see the shape, texture, and other finer details.”

So, the evening hours aren’t exactly clear as daylight for cats, but they can pick details up a lot better than we can in low lighting. 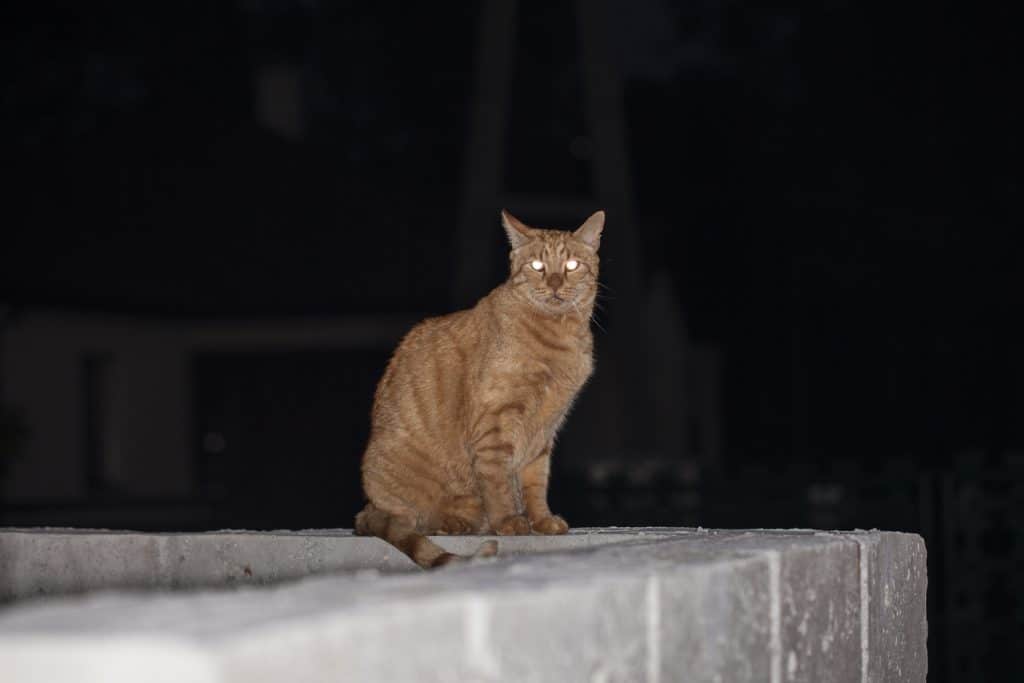 How cats see in the dark

When you really think about it, vision is such an interesting, mysterious thing. For example, the mantis shrimp has more color receptors than humans (12 to our 3), which allows them to see a rainbow of colors that we can’t even begin to imagine. Eagles can see four to five times further than humans (which is where the term “eagle eye” comes from). And, as we’re discovering here, while humans are prone to stumbling in the dark, cats have a much easier time navigating darkness than we do.

But why, exactly, is that? Why are cats so much better at seeing in the dark than we humans are?

There are a number of reasons why cats have better night vision than people, and most of them have to do with the structure of their eyes. Here are some of the reasons researchers think cats can see better in the dark.

Most animals (and all humans!) have circular pupils. But cat pupils have an elliptical, slit-like shape which plays a huge part in how they’re able to see in the dark. “Elliptical pupils by comparison to our circular pupils mean that they can push more light into their eyes in darkness,” says Satchu. “Cat pupils also dilate significantly to allow the most light to be let in at nighttime. Cats can expand their pupils by 135 fold, versus just 15 times for humans.”

It’s thanks to that vertical pupil that cats can see so much at night, but not be totally blinded during daylight, she says.

The human retina contains about 120 million rod cells. But cat retinas? They contain between six to eight times the amount of rod cells—which is one reason they’re so much better at seeing in the dark than people are.

“Cats have a high number of rods and low number of cones, the exact opposite of what we as humans have,” says Satchu.

The cornea is the outermost layer of the eye. When light enters the eye, it gets bent by the curved edge of the cornea, which plays a huge part in how well the eye can focus on objects.

Cats have a relatively larger cornea size than humans. This is a key contributor to their ability to see in the dark. “Cat corneas take over a larger surface area, meaning their eyeballs are bigger than ours would be at their size,” says Satchu. “Large corneas mean a larger surface area for light to enter.”

The more light that enters the eye, the easier it is for cats to see and focus, even in what we humans perceive as darkness.

Nope, that’s not a Harry Potter spell. It’s an additional layer of tissue behind the retina that cats have. Tapetum lucidum is completely absent in humans but useful in cats. “The tapetum of a cat’s eye is the shiny green reflective surface we often see in photographs of cat eyes or when we see cats outdoors at night,” says Satchu.

This tissue acts as a retroreflector, reflecting light backward into the eye and giving cats an even higher ability to see through darkness.

There are a number of other animals (including deer, dogs, horses, ferrets, and cows) that have the tapetum lucidum. But there are also many (including primates, squirrels, kangaroos, and pigs) that don’t, which likely has to do with how much time an animal spends in the dark and, therefore, how well they need to see in the dark.

So, it makes sense that cats—who are dusk and dawn hunters—would have the tapetum.

Not only can cats see better than humans, but as it turns out, they can actually see more than us. Unlike humans, cats have the ability to see UV light—which allows them to see things (like patterns in flowers or urine trails to help with hunting) invisible to the human eye.

Where does this superpower come from? A cat’s ocular media (which is just science talk for the transparent parts of the eyes) transmits UV wavelengths, which allows more light into the retina. And, as mentioned earlier, more light in the retina means better night vision.

Clearly, cats can see better than humans in the dark. But it’s not just their eyes that make them so adept at getting around when the sun goes down.

A cat’s whiskers act as touch receptors, which help them get a better sense of their environment and detect any potential obstacles, while a cat’s sharp sense of hearing allows them to hear higher frequency sounds from a further distance than humans—both of which help them navigate darkness.

For example, let’s say you and your feline friend are both outside after dark. It’s pitch black. There’s no artificial light, no moonlight, just darkness. You both have to find an animal who’s hiding somewhere in the darkness.

While you’d be stumbling around blindly (pun intended), your cat would not only be able to see better in the dark, but their ears would allow them to hear even the smallest rustling of leaves from a much further distance. Once they heard that rustling, their whiskers would help them navigate the darkness and find the other animal.

Eyes, ears, and whiskers—a cat is built for getting around in the dark, and they’re going to see, hear, and get around better than humans every time. 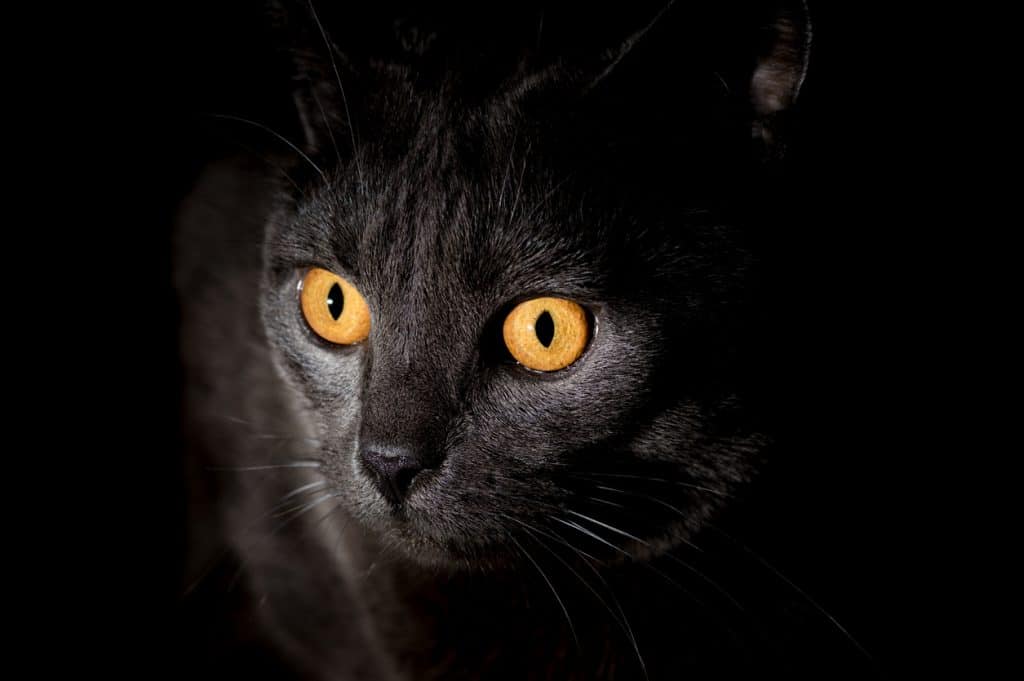 Why have cats evolved to see so well in the dark?

Between their vertical pupils, relatively high number of rods, large cornea size, and the presence of the tapetum lucidum, it’s clear that cat eyes are built to see in the dark. But why? How did cats evolve to see so well in the dark?

Most experts believe that cat eyes (and, in particular, a cat’s vertical pupils) evolved to make them better night hunters. Satchu says that research suggests vertical pupils are most common in nocturnal animals that use ambush as their primary way of attacking prey. “The thought around this is that the pupil shape allows for very precise distance gauging for the best prey-catching leap,” he explains. “Ambush predators need to be good at assessing distance to allow them to jump out and catch something that’s moving.”

So essentially, vertical pupils not only allow your cat to see better in the dark, but they also allow them to get a better sense of where and how far away their prey is hiding—which makes it easier for them to sneak up and catch them. And, in many cases, have them as a midnight snack.

But not all cats are created equal. While domesticated cats have vertical pupils, larger cats (like tigers and lions) do not. That may be because domestic cats aren’t exclusively active during low-light situations. “For species that are active both night and day, like domestic cats, slit pupils provide the dynamic range needed to help them see in dim light yet not get blinded by the midday sun,” said Martin Banks, the lead researcher on a study on animal pupils from the University of California, Berkeley in a 2015 press release outlining the research.

While vertical pupils definitely help your cat hunt better in the dark, they’re not a given for low-light hunters. And it’s worth mentioning: Even without vertical pupils, lions have no problem finding their prey—no matter what time it is. They’re not called “king of the jungle” for nothing! 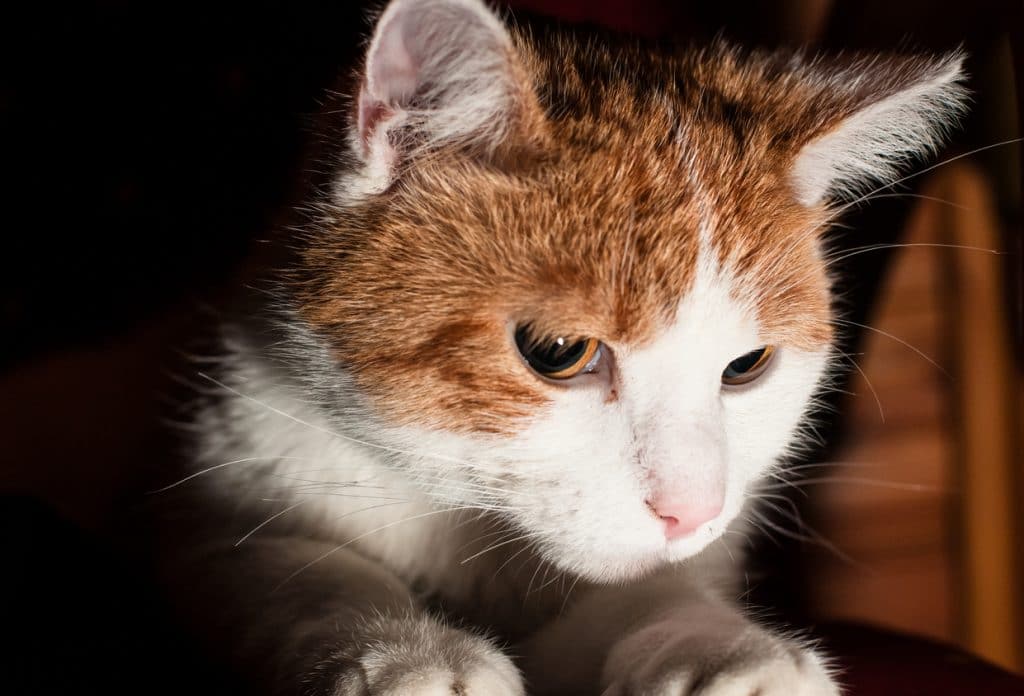 Do cats have the best night vision in the animal kingdom?

There’s no denying that cats have an innate ability to see in the dark. But how does that compare to other animals?

“Cats have great night vision, but not the best in comparison to other animals,” says Satchu. While cats are adept at seeing (and hunting) in the dark, their eyes are no match for some other predators—for example, the owl.

“If you think about an owl’s eyes, they’re designed to see really well, especially in the dark. They have some of the largest eyes relative to body size in the animal kingdom,” says Satchu. “Owls also have the ability to pick up on UV light very well, even in the dark, so they can follow urine or fecal droppings to the mouse that left them, in order to find their next meal.”

While cats can definitely hold their own in the dark, if they’re hunting the same mouse as an owl, the owl is likely to get it first. 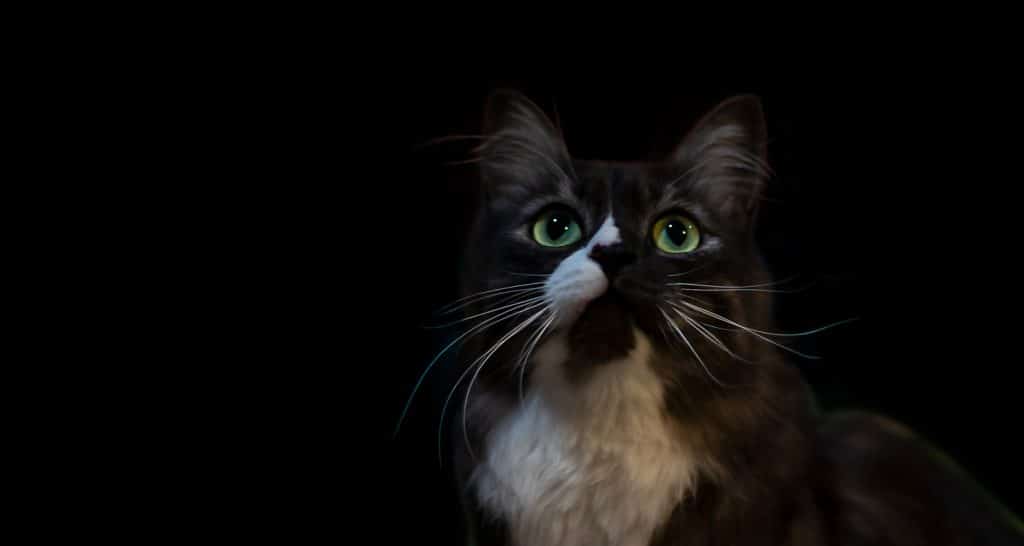 As mentioned, cats have fewer of the cone photoreceptors in their eyes. Beyond changing how well they see in the dark, it also changes how cats see color. “They aren’t completely color blind but don’t see the vibrance in shades like we can,” says Satchu. In 2013, an artist named Nickolay Lamm even went so far as to create renderings of what cat vision is like compared to humans. The results are fascinating.

There are also differences between cat and human vision when it comes to distance. “Cats are near-sighted, so they can see close things really well,” says Satchu. “Humans have the ability to see far away much more clearly than their feline counterparts.”

Thanks to their large corneas, cats also have a wider field of view. “200 degrees [of vision] versus our 180 degrees,” says Satchu. Think of it like walking around with a near-panoramic camera all the time.

So yes, cats can see in the dark, at least way better than humans. While they might not have the best night vision in the animal kingdom, they’re certainly up there. Don’t worry about leaving a light on for your cat when you go to sleep; with their eyes, they’ll be just fine navigating around your home in the dark. 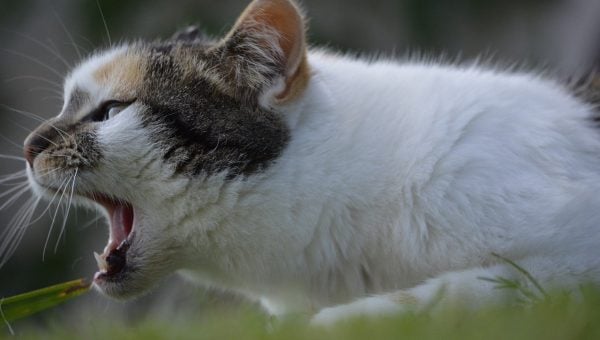