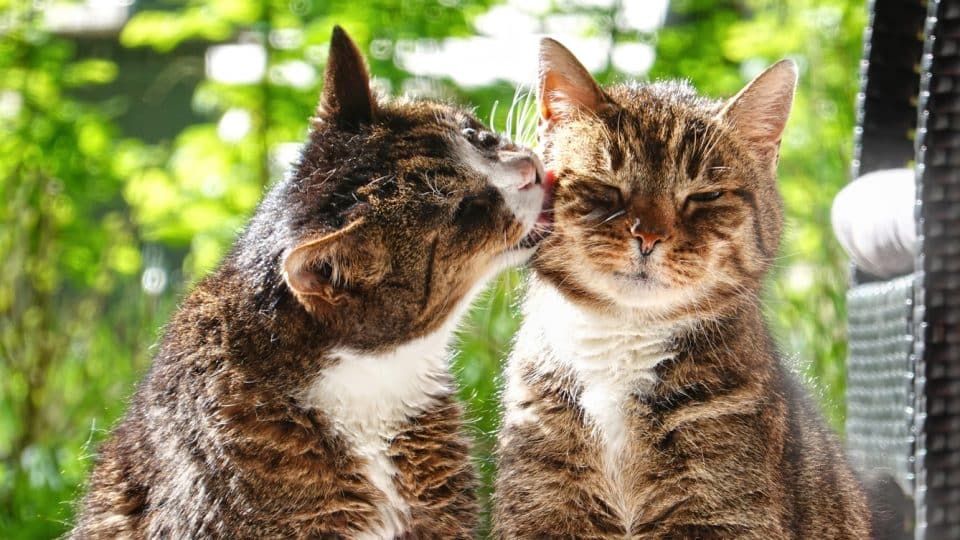 Have you ever wondered to yourself how cats communicate with each other? Well, wonder no longer! We’ve done the research, talked to the experts and are excited to break it down for you. Just like humans, cats express themselves in many different ways. This includes vocalizations (e.g. meowing, purring and hissing), chemical cues, body language (e.g. tail movements and facial expressions), and marking.

How cats communicate has also evolved over time. A study on evolutionary psychology at Cornell University shows that cats have learned to meow in a more pleasing way to humans over time in order to get what they want—food and affection. The study compares today’s domesticated cats to African Wild Cats, whose sounds were not appealing at all, hinting perhaps at why they have remained a wild species—while the Felis catus (domestic cat) has learned to live among humans, using their more pleasant vocal communication style to fulfill their needs.

Another important type of communication that cats use is body language. Not all cats will meow in greeting to each other, but many of them will touch noses as a way to say hello. Rubbing against each other is a form of affection between cat, and a hook at the tip of the tail is a friendly greeting.

Your cat’s ears, eyes, and tail are especially important in displaying body language—both to humans and to other cats. A friendly, confident cat holds their tail high with ears perked forward. The tail can crook forward when they approach someone they like and rolling over can be a sign of trust.

Looking at a cat (or human) and slow blinking is another way that cats show that they are open and attentive.

Meanwhile, if your cat averts their eyes, their ears turn to the side or flatten, or if they tuck their tail in under their body, it can be a sign that your cat feels uncomfortable or even threatened.

Feeling threatened can also bring out aggressive behavior. Aside from hissing and growling, cats show signs of aggression through their body language. Some of the signs of this include ears flattened against their head, a lashing tail, bristling fur, and an arched back or tail. 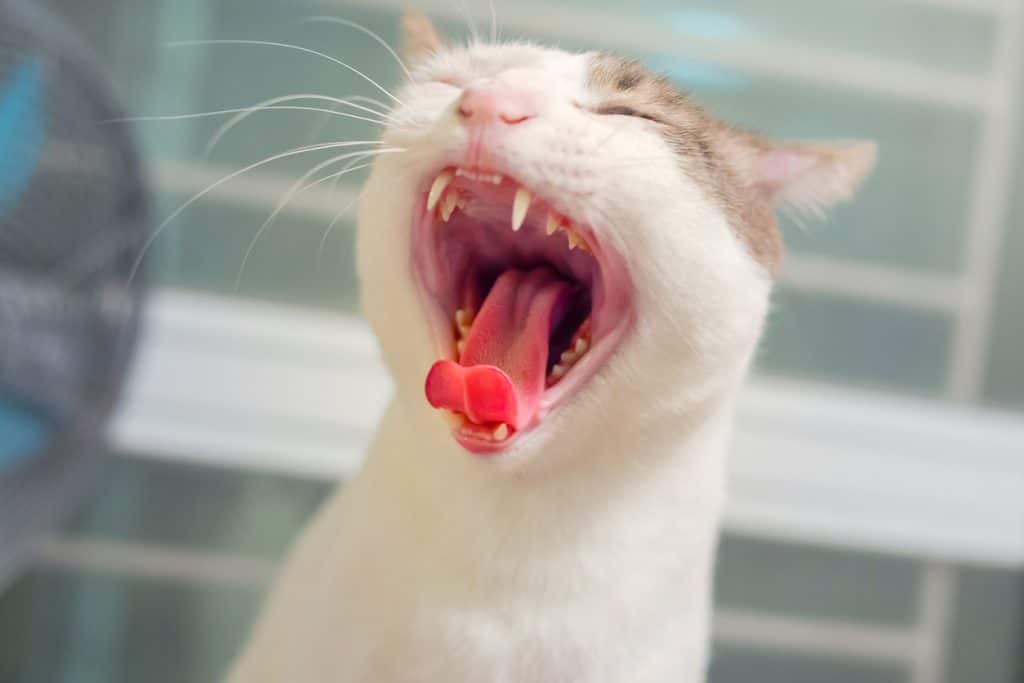 Chemical cues are the last and most subtle form of communication that cats use with each other. You may have seen your cat rubbing against other cats, against you, or against other objects. When cats rub against or scratch something, they leave pheromones on it.

When two cats rub together, they are exchanging scents which helps to recognize each other as members of the same group. (Some cats will do this to people in their household, too.) On the other hand, when your cat rubs against objects in the house they are leaving a scent trail to mark their territory.

There are other ways for cats to mark their territories as well—such as spraying urine. This is especially common in cats who have access to the outdoors, but it can also happen inside of the home in response to a stressor, such as multi-cat households, stray cats approaching the house, or life changes such as moving to a new home.

Yes, cats do meow to communicate with each other! But it is not necessarily the most common form of cat-to-cat communication. They also use many other methods, including trills, hisses, yowls, growls, snarls, body language, and scenting.

A dog who has never met a cat will often charge in excitedly to play and get slapped in the face. However, a dog who grew up around cats will recognize the signs to back off and will know to approach a new cat more carefully. 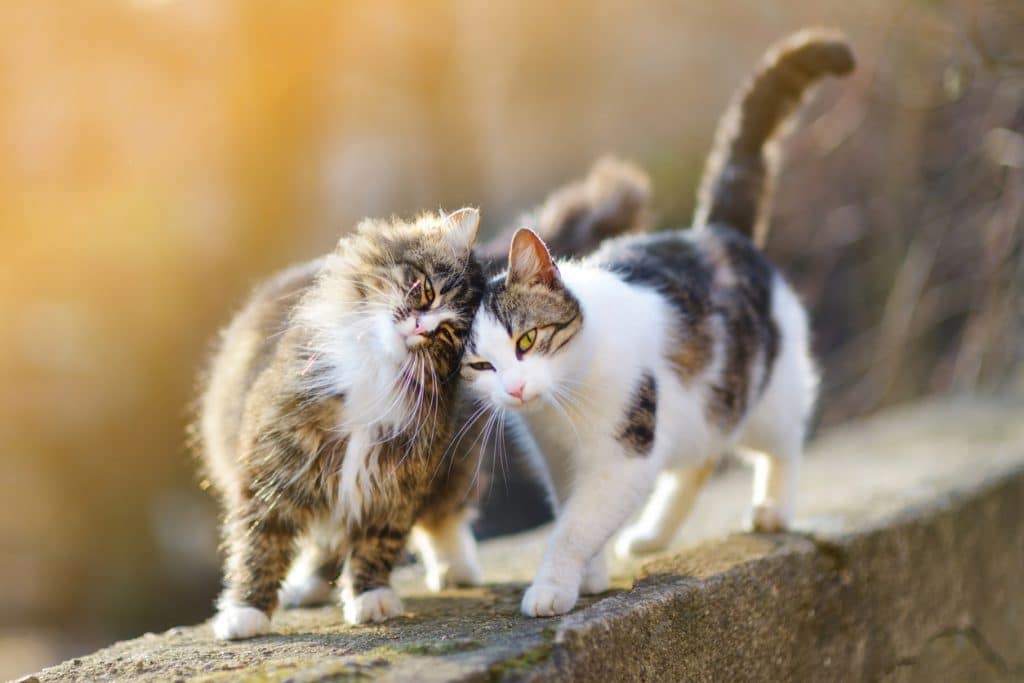 The time it takes for two cats to get used to each other varies. The Humane Society estimates anywhere from a few days to a few months. And it can take even longer for two cats to form a friendship, although some cats will never accept each other as part of the same social group but may learn to coexist or form their own “territories” within the house.

If you’re thinking of adopting a little brother or sister for your big cat to play with, read our guide on how to introduce a kitten to a cat for lots of tips and tricks.

A lot of communication is the same whether your cat is expressing themselves to you or another cat, cats are more vocal towards humans than they are toward other cats. This may be because it is the form of communication that we notice and respond to most easily.

Do only non-neutered cats spray to communicate?

According to research from the Cornell Feline Health Center, “cats that spray are usually unneutered males and, to a lesser extent, unspayed females, but 10% of neutered males and 5% of neutered females also spray. In households with more than seven cats, it’s likely that one or more of the cats will spray.”

When cats rub their face on something, they leave behind pheromones which is like a mark to show something is safe and helps cats to feel secure. This is one of the reasons cats can get stressed at shelters, as regular cleaning removes these pheromones from their environment and can leave them feeling anxious. Using pheromone diffusers can help cats feel calmer in new or stressful environments.

Cats have scent glands at the base of their tail, so this is another way to communicate with other cats by exchanging scents.

Want to learn even more about cat communication? Check out the articles below for further insights into meows, squinting, and other types of cat behavior.

Share388Tweet0Pin It1
Article Sources
Trust and integrity are foundational to our editorial process at Rover.com. Our editorial team prioritizes primary sources, including peer-reviewed studies and industry experts, to provide factual, accurate, and high-quality information to our readers. 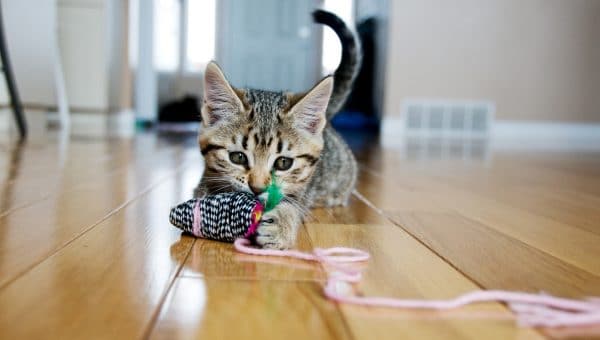 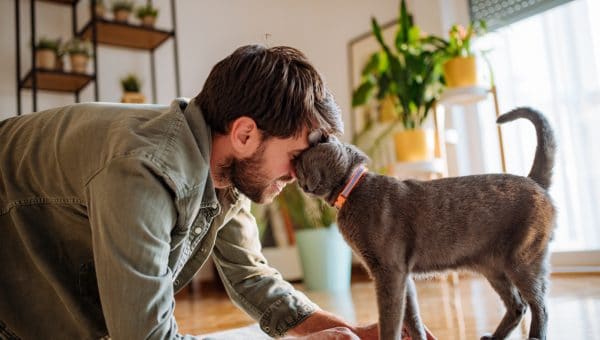