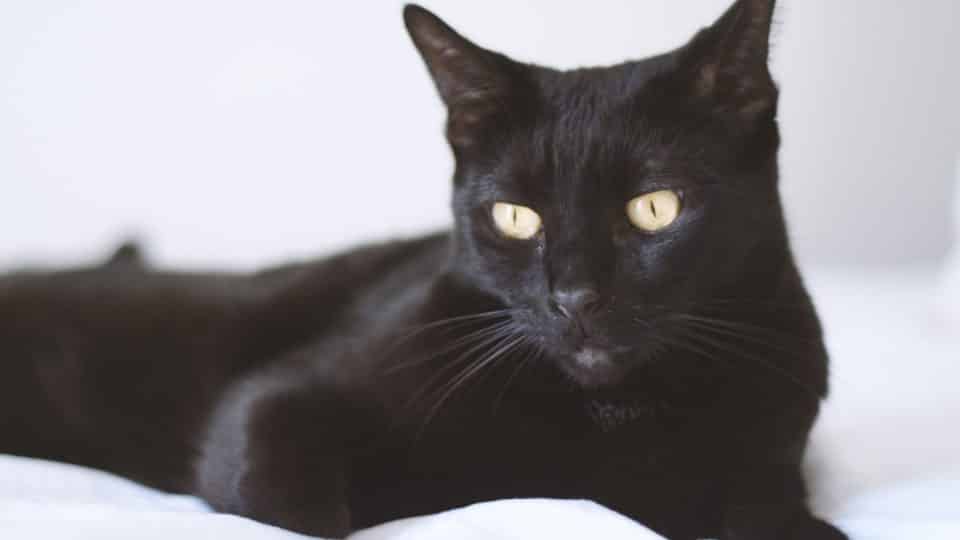 Bombays are the ultimate black cat. Their glossy coat is paired with a set of golden saucer-like eyes, earning the breed its nickname “the patent leather kid with the new penny eyes.”

Aside from its exotic looks, the Bombay is an endearing, playful, and agreeable feline.

What else can learn about this relatively new breed? 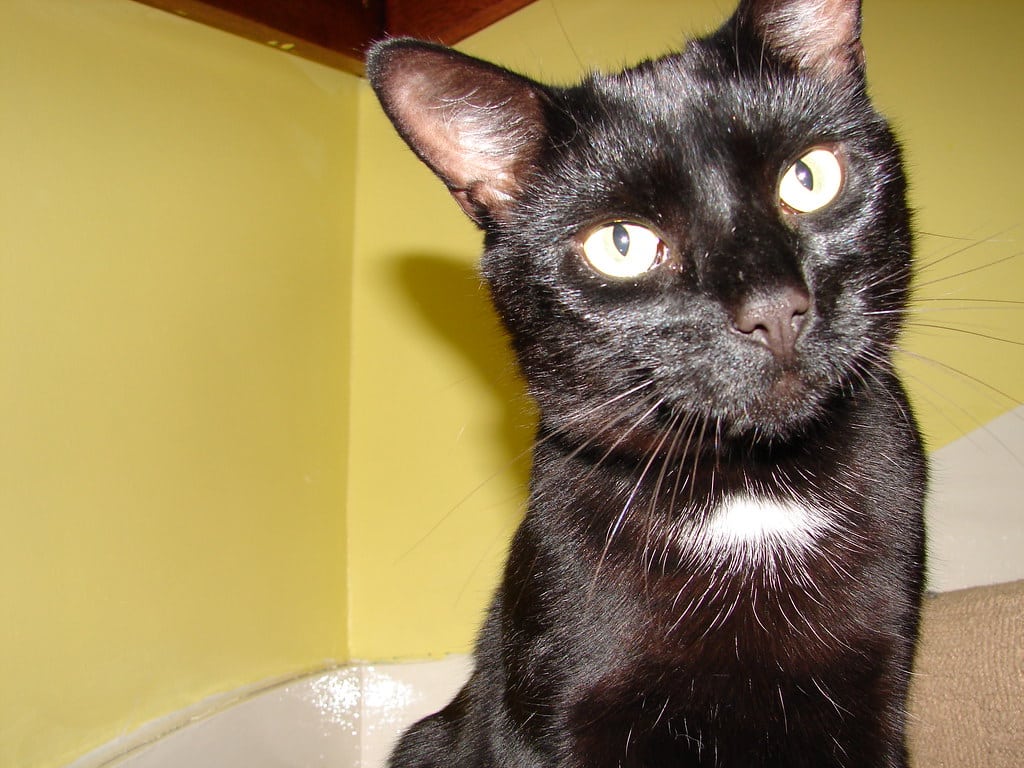 Much like the Savannah cat or the Bengal cat, the Bombay was bred with the goal of producing a domestic feline with a feral appearance.

American breeders crossed sable Burmese with black American Shorthair cats to achieve the Bombay’s exotic panther-like look. Their wild cat sway and striking appearance have earned them the nicknames the “mini-panther” and the “parlor panther.”

2. They aren’t from Bombay 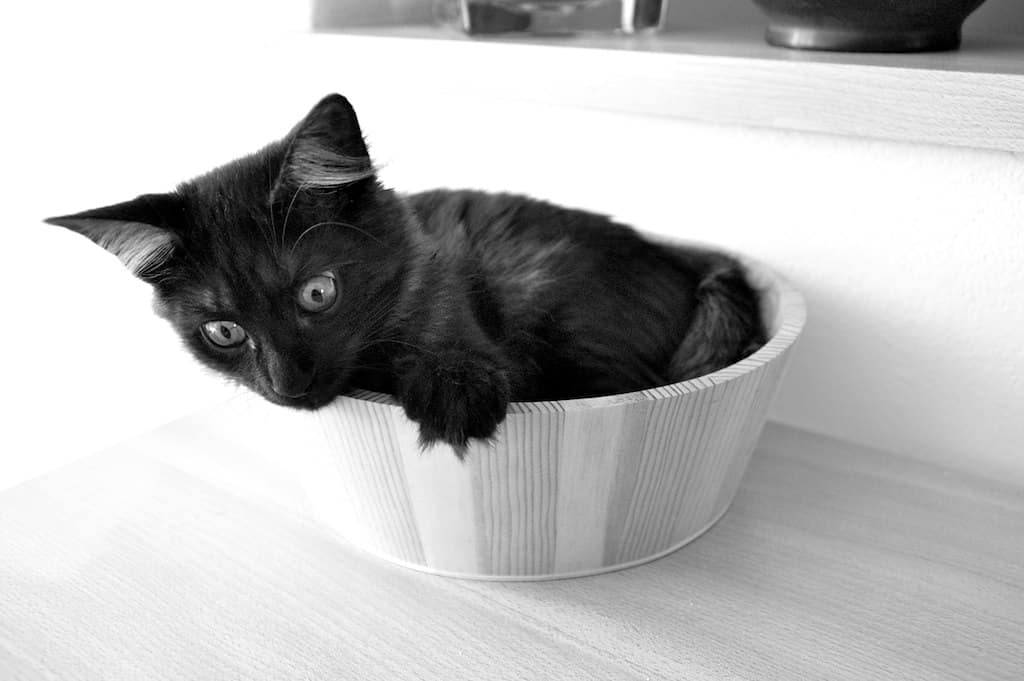 The origins of this breed are credited to American breeder, Nikki Horner, who wanted to develop a domestic breed that resembled a black leopard.

Ms. Horner began this project in the 1950s, and the first successful hybrid kitten was born in 1965. Horner named the breed “Bombay” because it resembled the black leopards of that exotic port town in India.

Bombays are recognized as an official breed by both the Cat Fanciers’ Association and the International Cat Association. 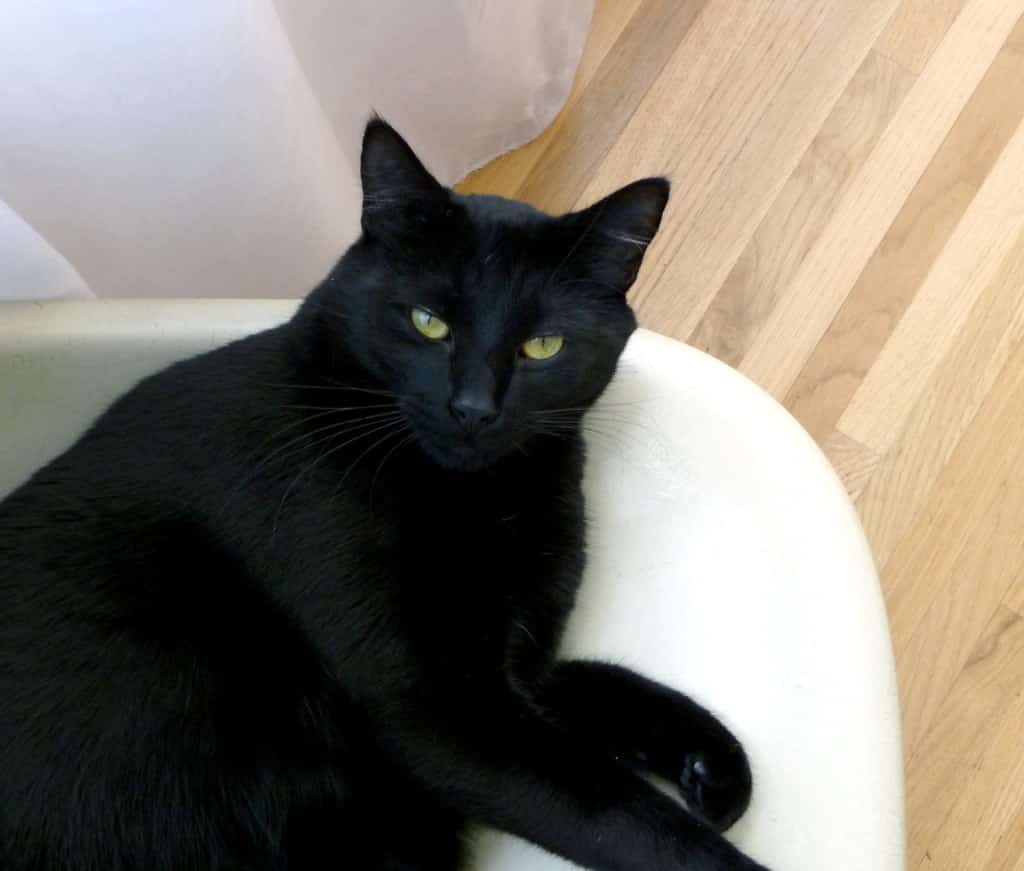 Bombay cats are easily recognized by their shiny, dramatic black coats. But did you know that even their noses and the pads of their paws are black? This trait is not commonly found in other black cats—just one more feature that makes this breed stand out from the crowd.

These medium-sized cats have a dense, muscular build. Their compact bodies are reportedly heavier than they look.

These sleek kitties are habitual heat-seekers. It’s not uncommon to find a Bombay resting peacefully near any heat source. They love to curl up on sunny window ledge for warmth, or even better—on top of their human!

This news will come as a welcome surprise for anyone seeking a low maintenance cat. The Bombay’s fuss-free short hair doesn’t require much attention beyond weekly brushing.

This breed also sheds less than the average cat. Sounds good to me! 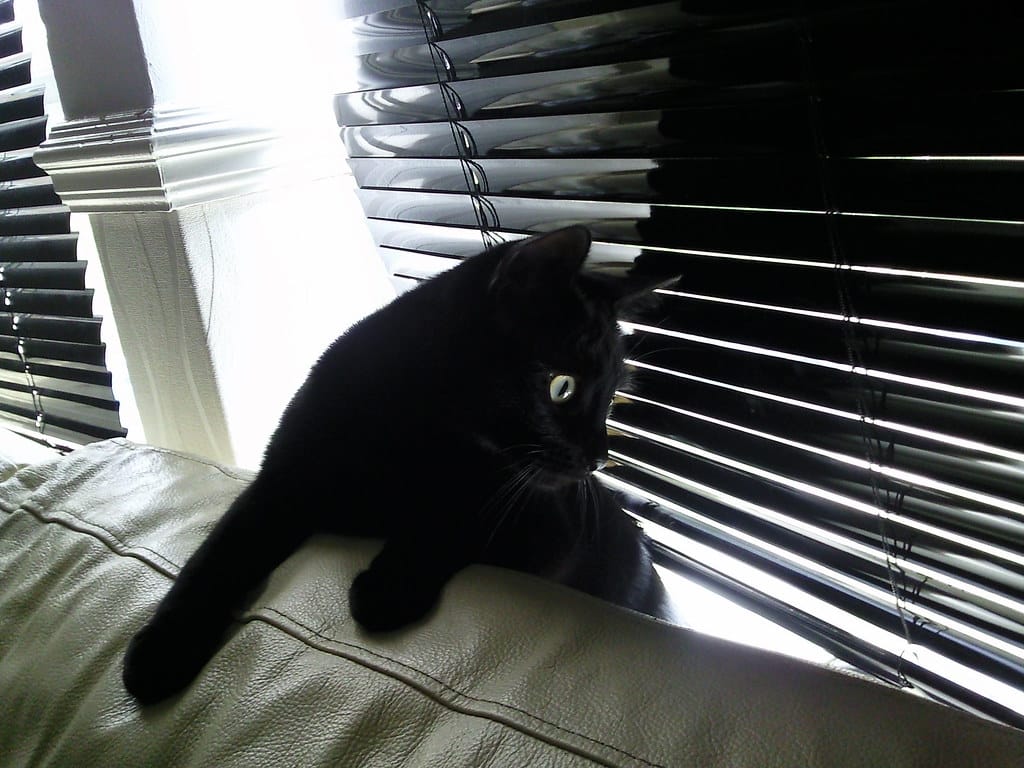 Aptly nicknamed “velcro cats,” Bombays tend to keep close to their beloved owners. They will seek their owner’s attention and have been known to follow their favorite human from room to room.

They’re particularly good with strangers. You won’t find these cats dashing to hide under the bed when company arrives. They’re likely to greet you—and anyone else—with a warm welcome at the front door.

These highly social cats hate to be left alone for long periods of time, and they’re prone to loneliness and depression if left in solitude for too long. This, unfortunately, can lead to destructive behavior. If you’re away at work all day, leave plenty of toys for your kitty to enjoy as well as a scratching post.

7. They have a bossy streak 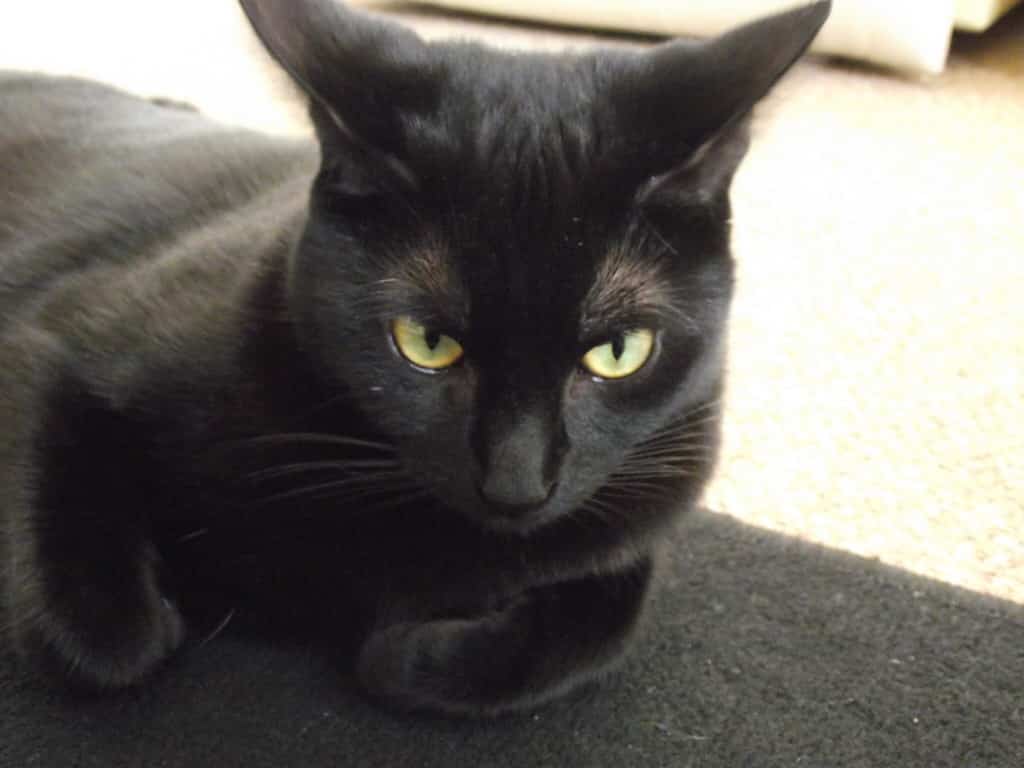 Make no mistake—Bombays like to be in charge. Although these friendly felines usually get along with other cats and dogs, a Bombay cat prefers to rule the roost.

These playful and interactive cats are highly intelligent. They can be successfully trained to perform tricks and to play fetch. Some of them can even learn to walk outside on a leash! 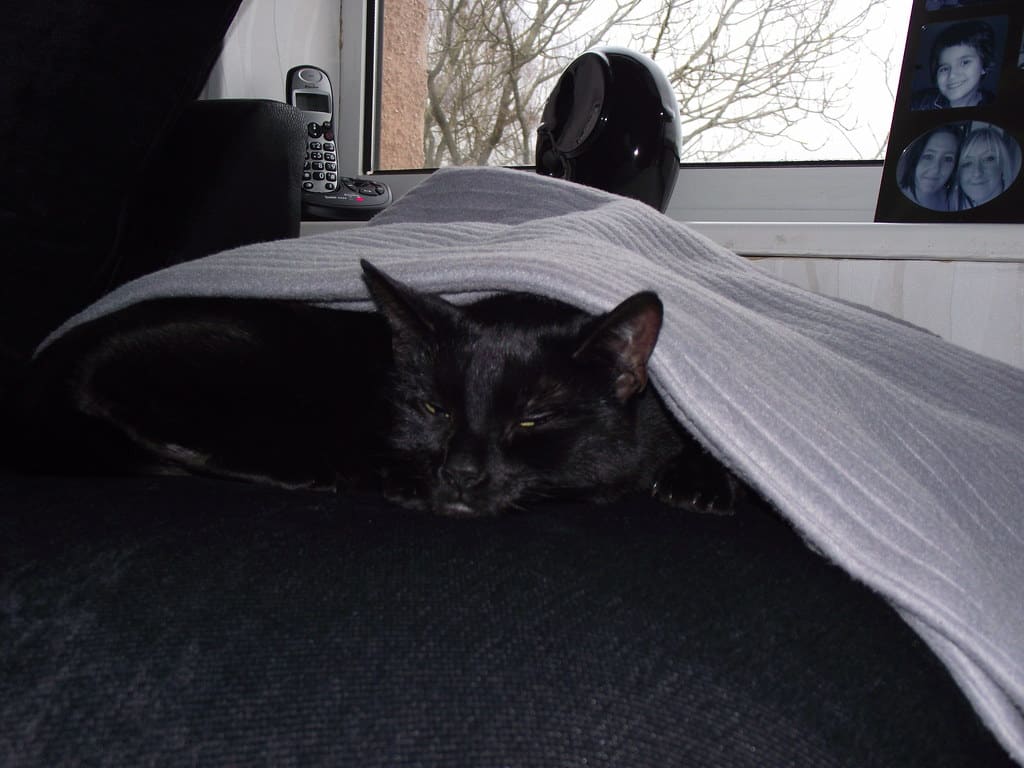 In blankets, that is. It’s not unusual to find a Bombay nestling in a pile of laundry or underneath the covers of your bed. This is the perfect arrangement for pet owners who enjoy snuggling up with their animals at bedtime. Just be careful when you get into bed—there could be a kitty hiding beneath your comforter. 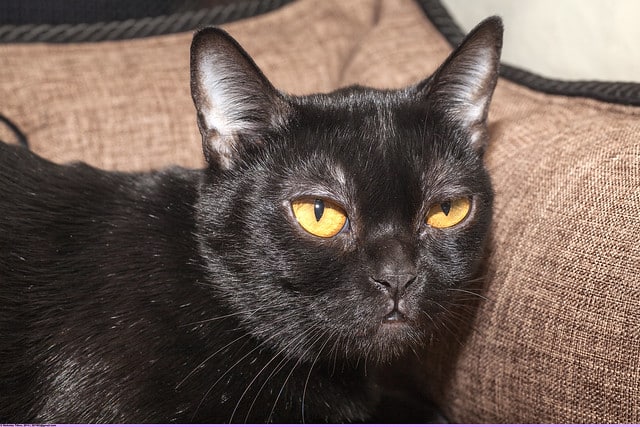 American and British breeders took different approaches to the creation of their mini panthers. American Bombays were achieved by crossing a sable Burmese with a black American Shorthair, whereas British breeders paired Burmese cats with black domestic cats.

The two breeds are similar, but the main distinction lies in their eyes. American Bombays sport gold or copper eyes while British Bombays’ eyes are often green.

Bombays have a winning combination of good looks and good manners. One thing we know for sure—this is one black cat that won’t curse you with bad luck should he cross your path. 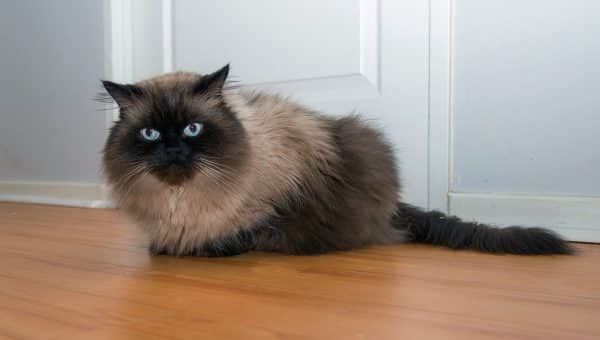 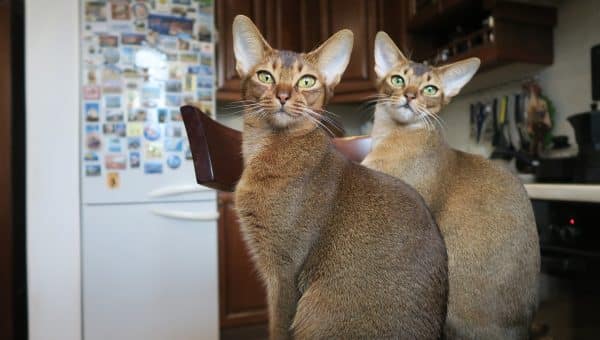 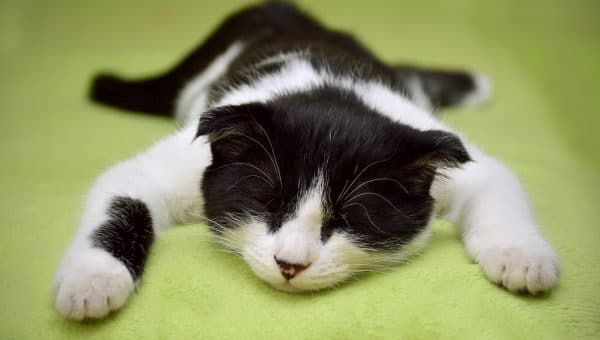