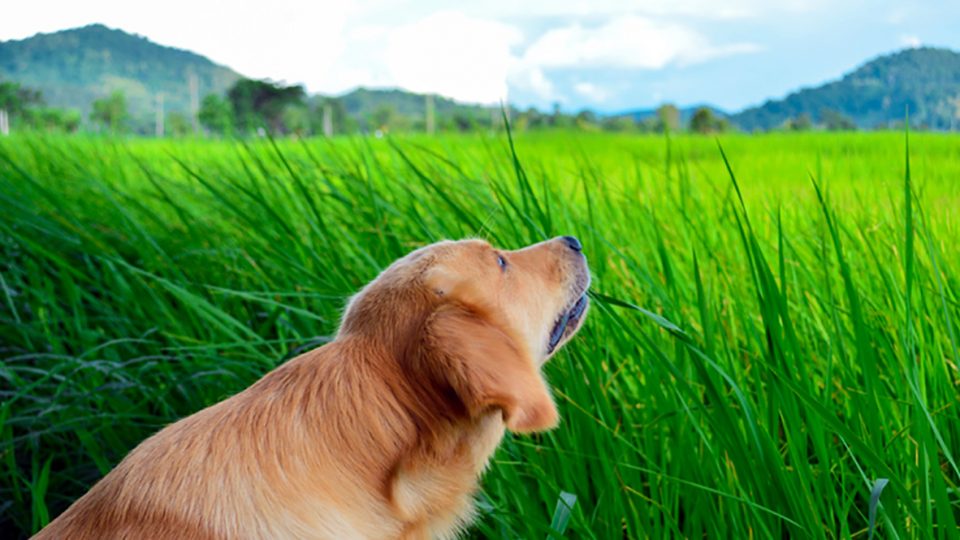 Most dog owners have seen their dog treat a neighbor’s yard like an all-you-can-eat salad bar. It’s such a common canine behavior that we almost take it as a given. But why do dogs eat grass?

As a curious pet owner, you probably want to get to the bottom of this. Maybe you need to settle a bet with a friend who believes a common grass-eating myth or you have some valid concerns about what seems like such unusual behavior in your pet.

From debunking grass-eating superstitions to when to put a stop to the snacking, we’ll tell you what you should know (and what you should watch out for) when your dog is mowing the lawn with their mouth.

Why do dogs eat grass?

You eat your food, and your dog eats their food, and no one eats grass, right? Wrong! Like with many animal behaviors that seem unusual to people, there are plenty of human-spread myths about why dogs eat grass. You may have heard that your dog is probably sick and wants to induce vomiting, or that eating non-foods (a behavior known as pica) is a sign of a nutritional deficiency…because, after all, it can be in humans. Believe it or not, research suggests that these are both myths.

The study…found only 22% of dogs vomited after eating grass.

Many people mistakenly believe that dogs eat grass to make themselves vomit when their stomach is upset, but a 2008 study conducted at the University of California, Davis challenged that assumption.

The study, which analyzed over 1,500 data sets, found that only 8% of dogs showed signs of illness prior to eating grass, and only 22% of dogs vomited after doing so. That data suggests that a high percentage of dogs eat grass for reasons other than to relieve an upset stomach.

The same UC Davis study also debunked the theory that dogs eat grass in order to compensate for a nutritional deficiency in their diet.

To explore the relationship between grass eating and quality of a dog’s diet, the researchers compared a group of dogs with a fiber-heavy diet to another group with a low-fiber diet and found that they were equally as likely to eat grass.

Then why do dogs eat grass and throw up?

It’s more likely that your dog is throwing up for a different reason. They may have eaten something distasteful, eaten too much, or have the dog version of the stomach flu.

What to watch out for

While eating grass is a common behavior among dogs, there are warning signs to be aware of when they’re consuming the green stuff. Most concerning is a sudden increase in grass consumption or frequent vomiting after eating grass.

If you notice either of these changes, it’s important to take your dog to the vet for a physical exam and ask that your dog be tested for gastrointestinal diseases.

Bottom line: if your dog is eating grass and then vomiting on a regular basis, or vomiting frequently in general, make an appointment with the vet and get proper medical care.

So what does it mean when a dog eats grass? 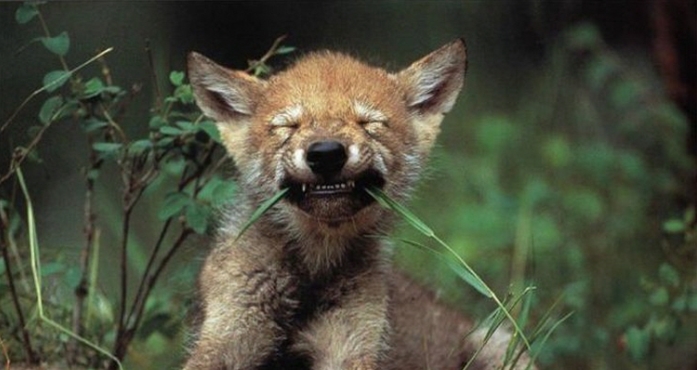 Having disproved two common explanations for dogs’ grass-eating behavior, the UC Davis study suggested an alternative theory that dogs are predisposed to eating grass because their ancestors, wolves, ate grass.

They hypothesized that wild dogs used to consume grass in order to fend off intestinal parasites. The fiber from the grass increases contractions in the intestinal tract, which suffocates the worms or parasites that may be in the dog’s stomach.

Interestingly, the results of the study showed that younger dogs are more likely to eat grass than older dogs. Researchers supposed that because the digestive systems of younger wild dogs are less developed, they’re more susceptible to intestinal parasites—so the predisposition to eat grass is more pronounced in puppies.

The study also suggested that dogs may eat grass simply because they like the taste of grass. It might not seem delicious to you, but to your dog (having descended from grass-eating ancestors) eating the lawn might make perfect sense.

Ultimately, researchers concluded that grass eating is a normal dog behavior that shouldn’t be cause for serious alarm.

That said, if your dog is eating an excessive amount of grass, you may want to curb their behavior with some of the interventions below.

How to stop your dog from eating grass

While a little grass now and then might be OK, if your dog’s behavior is getting compulsive, and you’re worried about the volume of grass they’re eating, you might need to redirect your pet away from the grass by offering fruits and vegetables.

Raw or lightly steamed fruits and vegetables can be healthy additions to a dog’s diet, and adding fibrous plant material may help calm your dog’s cravings for greenery, all while satisfying their nutritional needs and contributing to a well-rounded diet.

Need help including fruits and veggies in your dog’s diet? These DIY dehydrated fruit and veggie dog chews are easy to make and fun for your dog to chew.

For more information on what human foods your dog can and can’t eat, take a look at our Can My Dog Eat series.

If your dog has developed a heavy grass habit, they may also be eating grass out of boredom. As with other compulsive dog behaviors, such as licking, chewing, and digging, having nothing better to do often makes things worse.

To help redirect your pet from the undesired behavior, make sure they’re getting plenty of exercise and interaction during the day, and make it a point to incorporate engaging games and plenty of positive attention for desired behavior, especially at the times your dog is prone to grass eating.

Is it safe for dogs to eat grass?

Eating grass is not dangerous or harmful in and of itself. However, the products people apply to their grass, including weed killers, pesticides, or fertilizers can be harmful to dogs. You may not add these toxins to your own lawn, but you never know what potentially poisonous materials your neighbors are pouring on their grass, so it’s important to be extra vigilant when your dog starts sniffing around in another person’s yard.

For safety reasons, it’s also worth taking a closer look at your garden and any plants that might be growing near the grass your dog likes to eat. Many common plants can give dogs an upset stomach or worse.

If you have concerns about what’s growing near you, read our article on weeds or flowers growing in a garden can be toxic to your pup.

And if you’re wondering about the safety of other indoor and outdoor plants near you, see Rover’s database of poisonous plants for more information on common and uncommon plants that are poisonous to dogs.