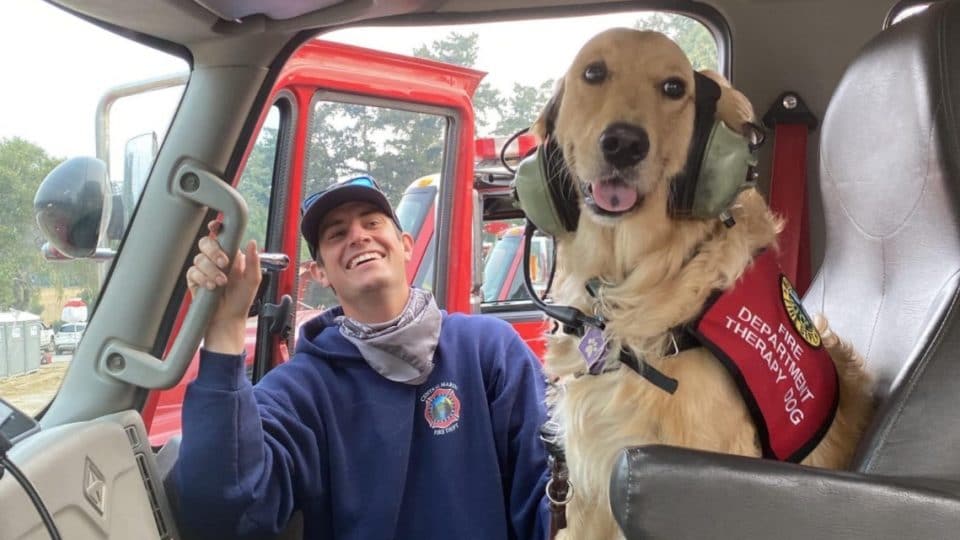 With the wildfires raging along the West Coast, and firefighters working long, difficult shifts, the emotional toll can be devastating. Some of the Marin County, California firefighters are getting some relief by way of a golden retriever named Kerith. Her job: To wiggle her butt, let the firefighters pet and spend time with her, and help relieve their stress.

But Kerith didn’t come to her job directly. She was headed off at the pass after failing to become a guide dog for the blind.

It all began when Kerith was an 8-week-old puppy, and there’s nothing cuter if you ask Heidi Carman, her owner, and handler. Carman knows just how cute because for years she’s been raising golden retriever puppies for Guide Dogs for the Blind (GDB.)

Two years ago, when Carman and her family took in Kerith, their fifth golden puppy, they went through the process of training, raising, and socializing the dog to grow up to be a working guide dog. 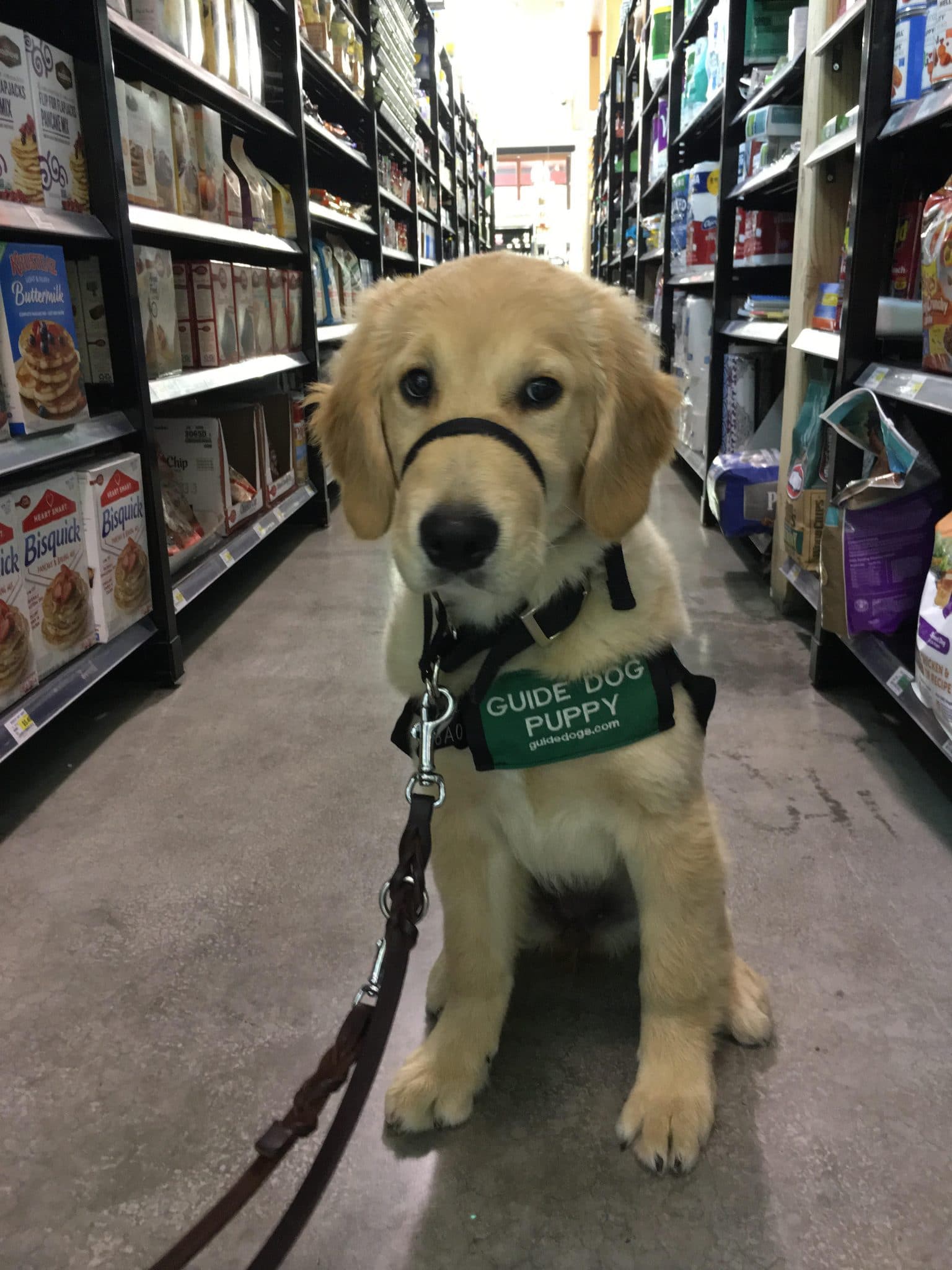 “Since I had raised so many dogs, I had a feeling from an early age that guide dog work may not be in the cards for Kerith,” Carman said. “She was afraid of the vacuum cleaner. But the biggest issue in my mind was that she was so solicitous to every person she met. However, raising her to be a guide dog meant she needed to focus on me and not other people.”

A guide dog who wants to meet every person they encounter could be detrimental to a visually impaired person, and that’s not conducive to guide dog work. Carman would eventually find out that Kerith had another calling.

Carman’s own calling of raising and training the puppies came easy to her. She had had dogs since she was a child. “I loved them so much,” Carman said. “The best birthday of my entire life was when I turned 9. I was surprised by a rescue dog named Daisy who my mom got from a local dog shelter. That was the beginning of my love affair with dogs.”

Then about 20 years ago she started to see people with guide dog puppies from GDB, which is local to where she lives in San Rafael, California. She reached out and started to volunteer.

A stay-at-home mom, Carman began raising puppies when her five children were young but old enough to be helpful with the dogs. “I wanted to teach my kids to be of service to others in the world,” she said.

Puppy raisers have the dogs until they are approximately 15 months old. “It was difficult to hand off the first dog,” Carman said of the day named recall day when the dog is handed over to formal trainers. “You know it’s coming but it’s so sad. But you know you’re doing such a great thing. How wonderful to give somebody a working guide dog.” 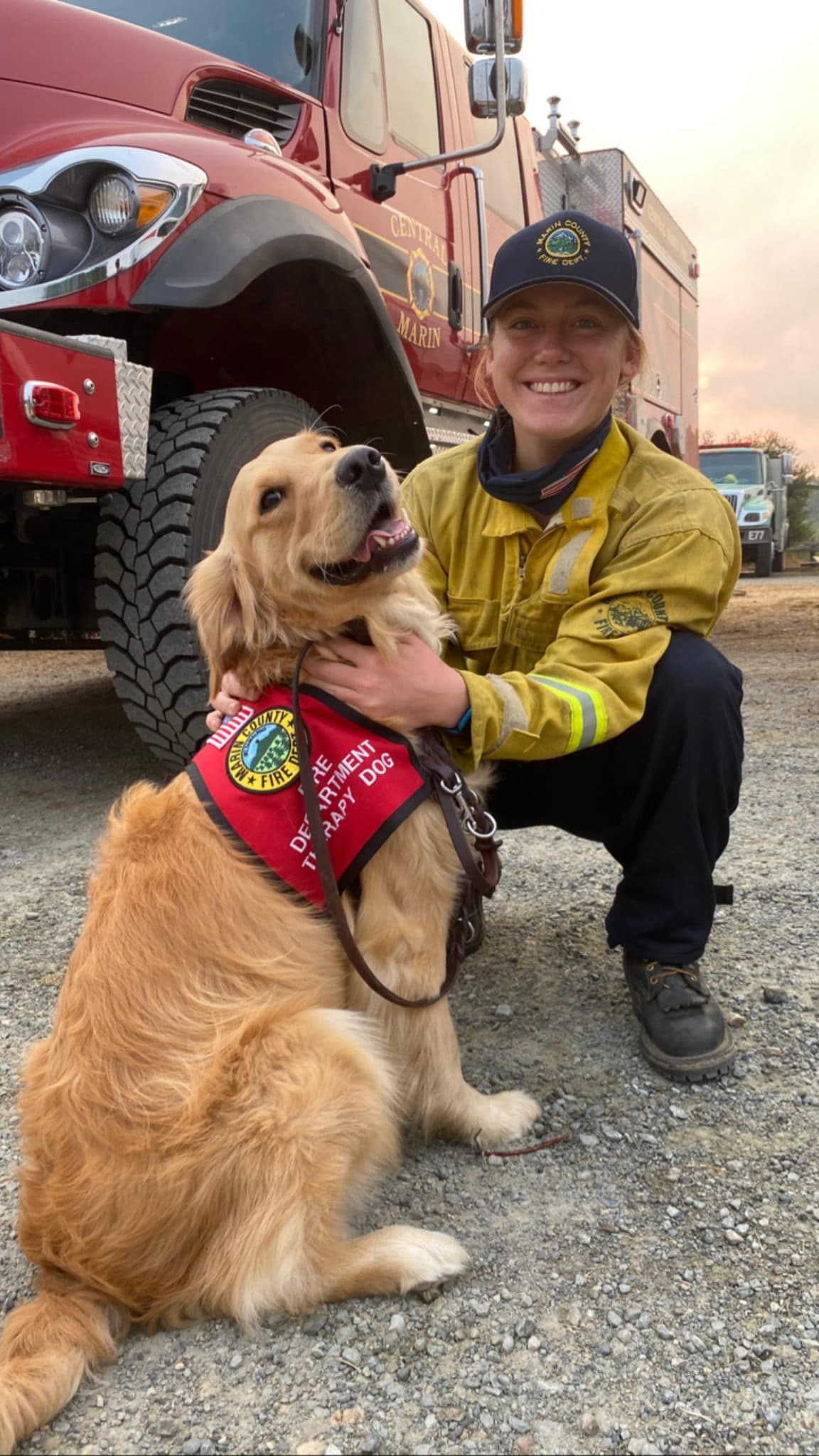 With Kerith, things were different and Carman turned out to be right about her. The dog wasn’t perfect and attentive to her individual, and she was too friendly with everyone she met. “She is like Lucille Ball, but a well-trained Lucille Ball,” Carman said. “She’s a silly girl.”

So, at 14 months old, Kerith’s fate changed. “They career changed her before recall day so I didn’t have to go through the heartbreak of taking her back to Guide Dogs,” Carman said.

When a dog doesn’t make the cut, GDB first looks to see if there are other organizations that can use the dog, but Kerith didn’t qualify for any of them. That’s when Carman was able to adopt her. “I must admit of all the dogs I raised, I go in knowing it’s not my dog, but with her there was this special bond,” Carman said. “I  was madly in love and it would have been very hard to give her back.”

Carman adopted Kerith in June 2019. She soon decided they would both get certified through Pet Partners as a therapy dog team as well as an animal-assisted crisis response team. It was a perfect fit. All of the training Carman did with Kerith from puppyhood helped prepare the dog to pass the test. They were certified in October 2019.

“I knew she would be really helpful as a therapy dog,” Carman said. “She was born to work.” 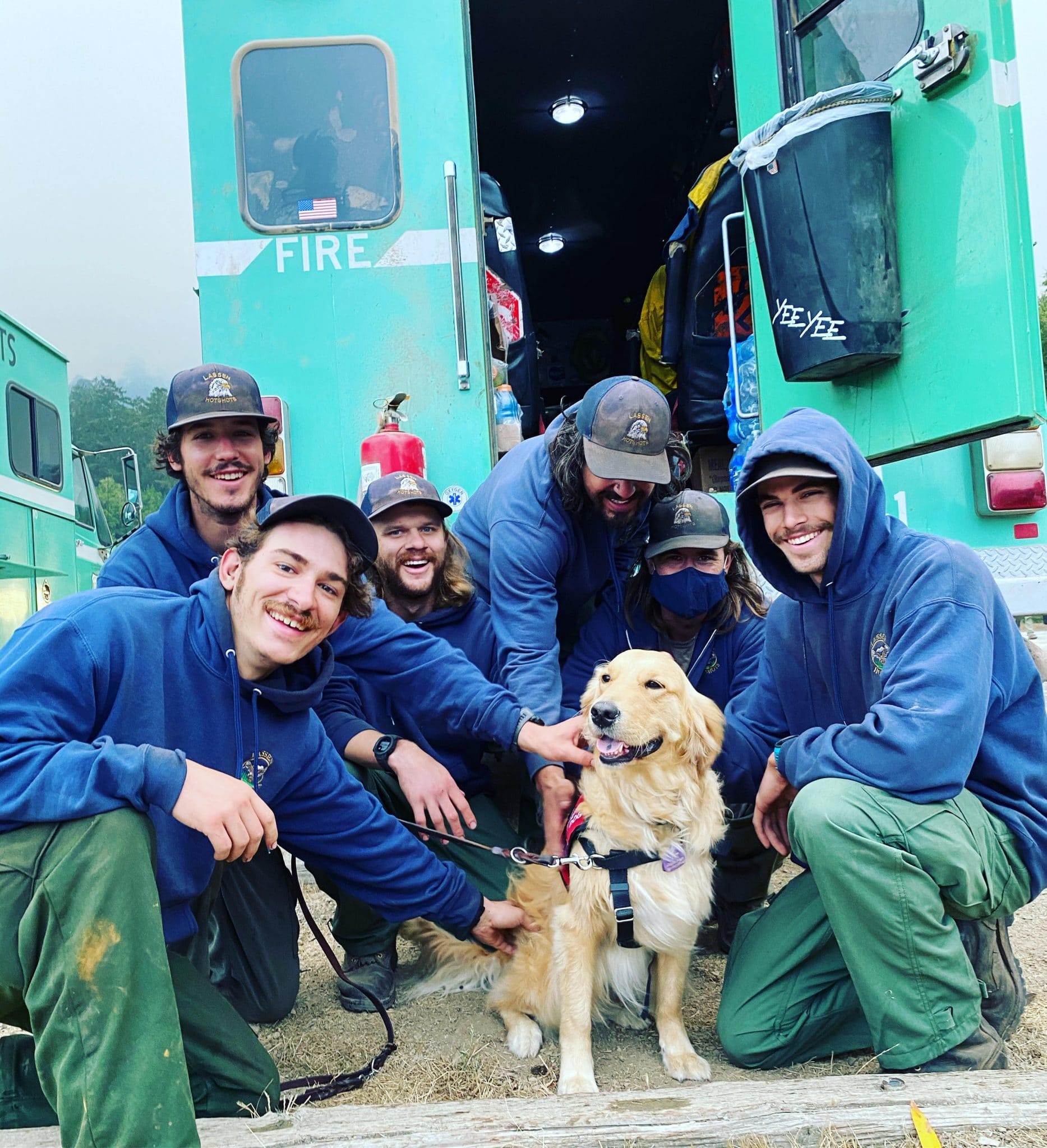 Carman and Kerith first began volunteering at MarinHealth Medical Center’s emergency department. “It was amazing the first time we went,” Carman said. Kerith visited with people in the waiting room and then went to the treatment area to meet nurses, doctors, and patients. Everyone loved the dog who was attentive and helpful. It was a perfect fit.

The duo soon met some firefighters at the hospital’s ER. Since some are paramedics they often brought in their patients.

“As soon as Kerith saw the firefighters it was love at first sight,” Carman said. “It was so clear that those were her people.”

An ER nurse, who is also an educator for all the fire departments and whose husband and son are local firefighters, started to set up visits for Kerith and Carman to visit some fire stations. Soon the firefighters started to request their visits.

Prior to COVID-19, “We’d go into the fire station and the firefighters would just play with her,” Carman said. “She would get so excited to see them. She’d run up to them like they were her best friend, even though she never met them. Clearly this is her passion and mission in life. She would walk around wiggling from firefighter to firefighter.” 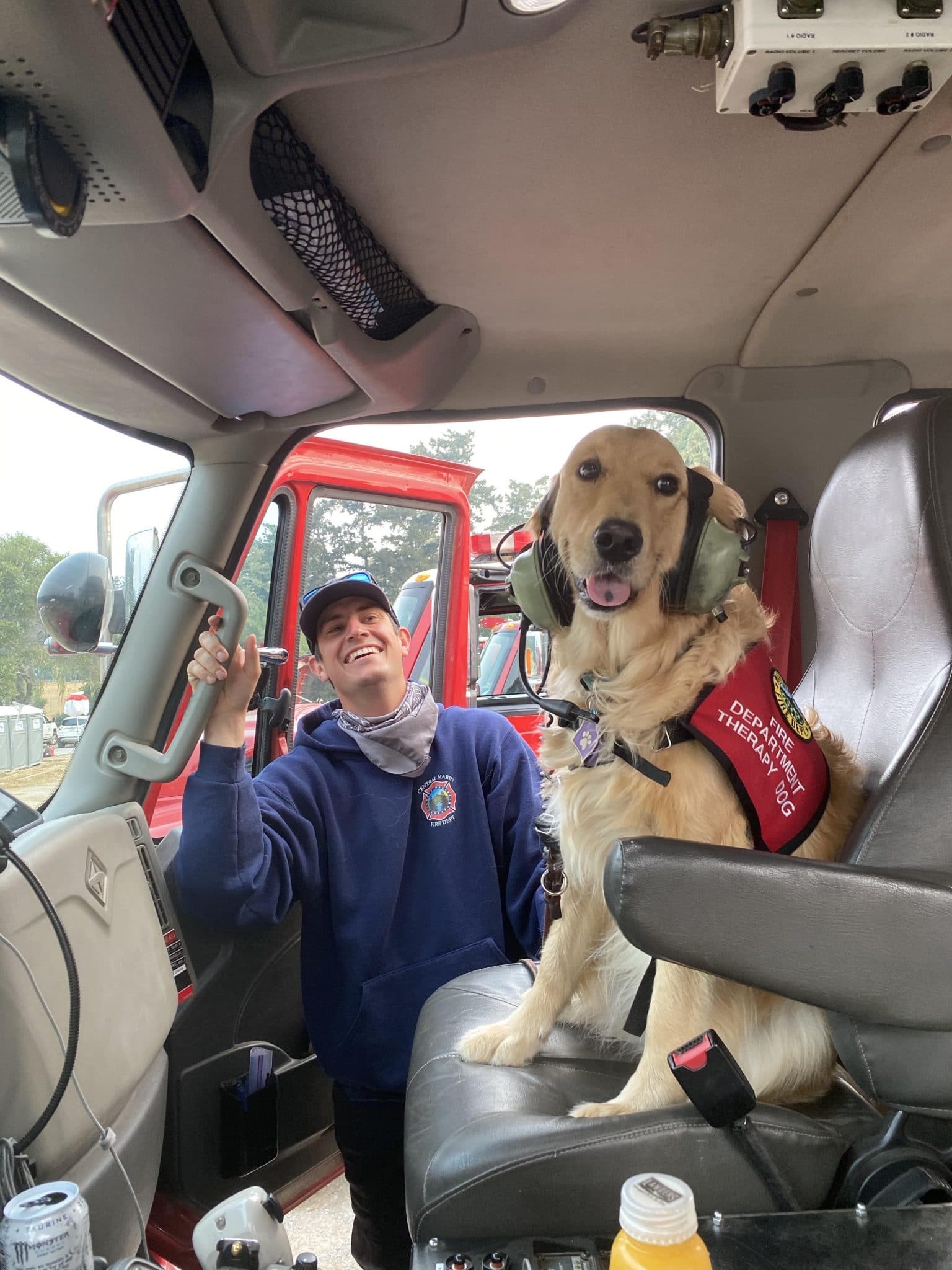 Along with her contagious golden retriever energy, Kerith also has another gift. “She can sense that someone needs her attention more than someone else,” Carman said. “She’ll go up to that firefighter and sit on their foot, lean into their leg, and turn her head around to look straight into their eye. A couple of firefighters separately have asked, ‘How does she know I need this right now? It’s like she’s looking into my soul.’”

When She’s Needed Most

Kerith is available to visit with firefighters after they have been on a particularly bad call. She attends without Carman along with a behavioral health firefighter who is there for peer support. During the debriefing, they sit around and talk to one another, and Kerith is there to help if they need her.

This past August, when lightning started many of the fires in Northern California, Carman and Kerith were asked to be there, and they continue to help where they are needed. They volunteer along with Cal Fire and Employee Support Services teams who are there to check on the mental health of firefighters at base camps. Carman and Kerith walk around with them to check in with everyone in the morning. “I am always attached to the leash,” Carman said. 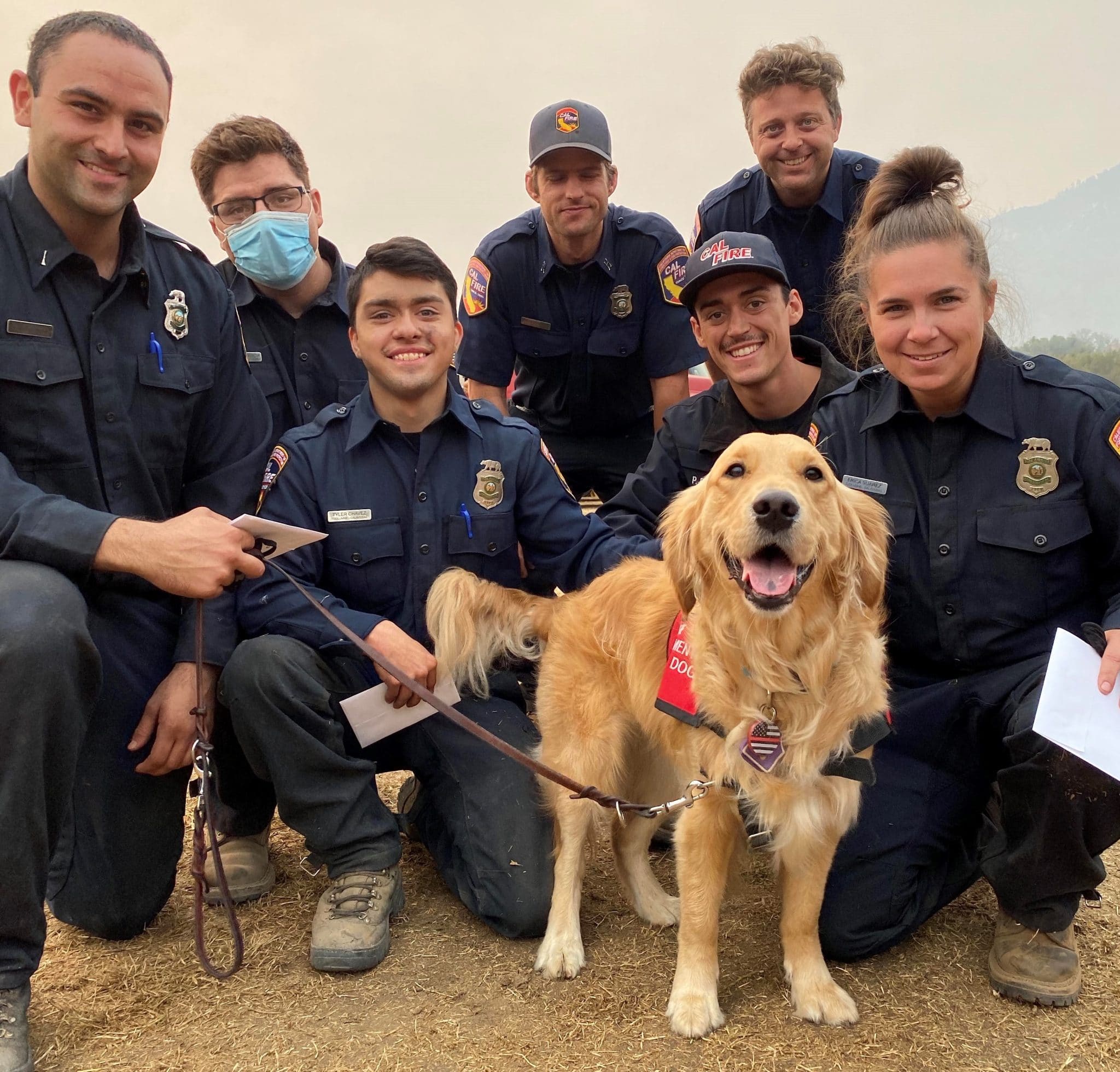 “They are about to go off into something extremely dangerous, but when they see Kerith, they’ll talk about missing their dog or their family,” Carman said. “When they are with her it gives them a moment to pause and just be present and not be in the chaos of what they’ll do for the day.”

Kerith’s welfare is of the utmost importance so Carman doesn’t take her more than four hours away from home because it can be too stressful. And, since the base camp is so smoky, Kerith is only out there for four hours at a time, and only works two days in a row. “I always bathe her afterward because of the smoke, plus she needs to be clean and smooth for when the firefighters pet her,” Carman said.

Even though the firefighters at the local fire department want her to visit all the time, Kerith has been unable to do so because of COVID-19. However, they are getting more calls to go to the base camps of the wildfires.

The good that Kerith does for the firefighters at the base camps is undeniable. “When you’re petting a dog, endorphins and serotonin and all those feel-good chemicals in your body are released, and the firefighters are able to have a sense of well-being,” Carman said. “That sets them up to have a positive day in a really stressful environment.”

And, the firefighters aren’t the only ones who sense it.