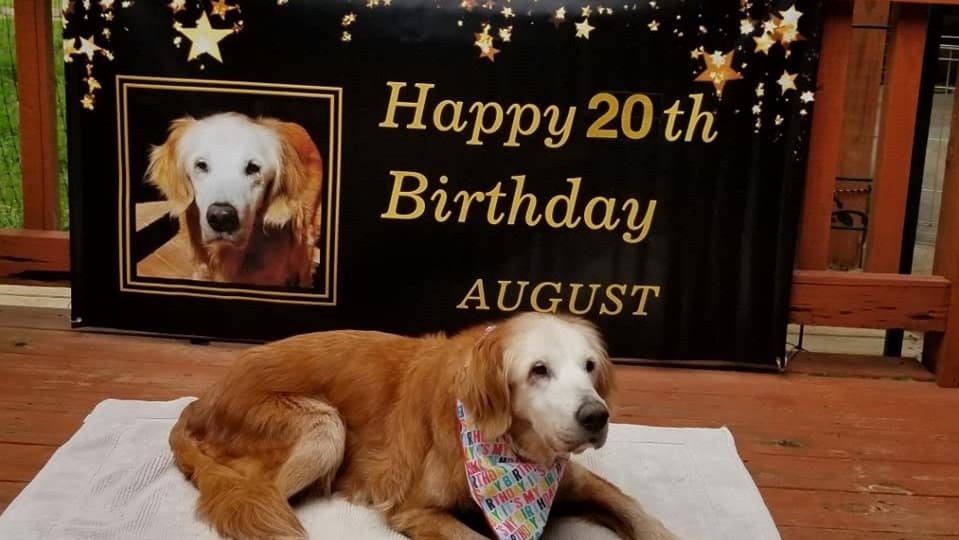 It’s definitely not every dog who gets to celebrate a 20th birthday, although we’d love it if they all did. But August, the adopted golden retriever known as Augie, kicked off her big 2-0 in high canine style this past April.

So, how did Miss Augie celebrate? With cake, of course. Along with party favors, Augie got to indulge in a specially made, delectable dog-friendly carrot cake and spent time with her siblings: golden retrievers Belle, Bruce, and Sherman. Her pet parents Jennifer and Steve Hetterscheidt were on hand to take photos and sing the birthday song.

It’s definitely not typical for golden retrievers, or most other dogs, to live 20 years.

Golden retrievers have a life expectancy of 10-12 years (read more about the breed here). And while there have been other goldens to live well into their teens, according to golden retriever blog, Golden Hearts, Augie is apparently the first known of her breed to hit the 20-year milestone.

Augie had been in two different homes before eventually finding her forever home with the couple who adopted the senior dog through Golden Retriever Rescue Southern Nevada (GRRSN).

In 2003, Jennifer along with several other women cofounded GRRSN when she and her husband lived in Nevada. She was the intake manager for 14 years, eventually retiring from the organization in 2017. 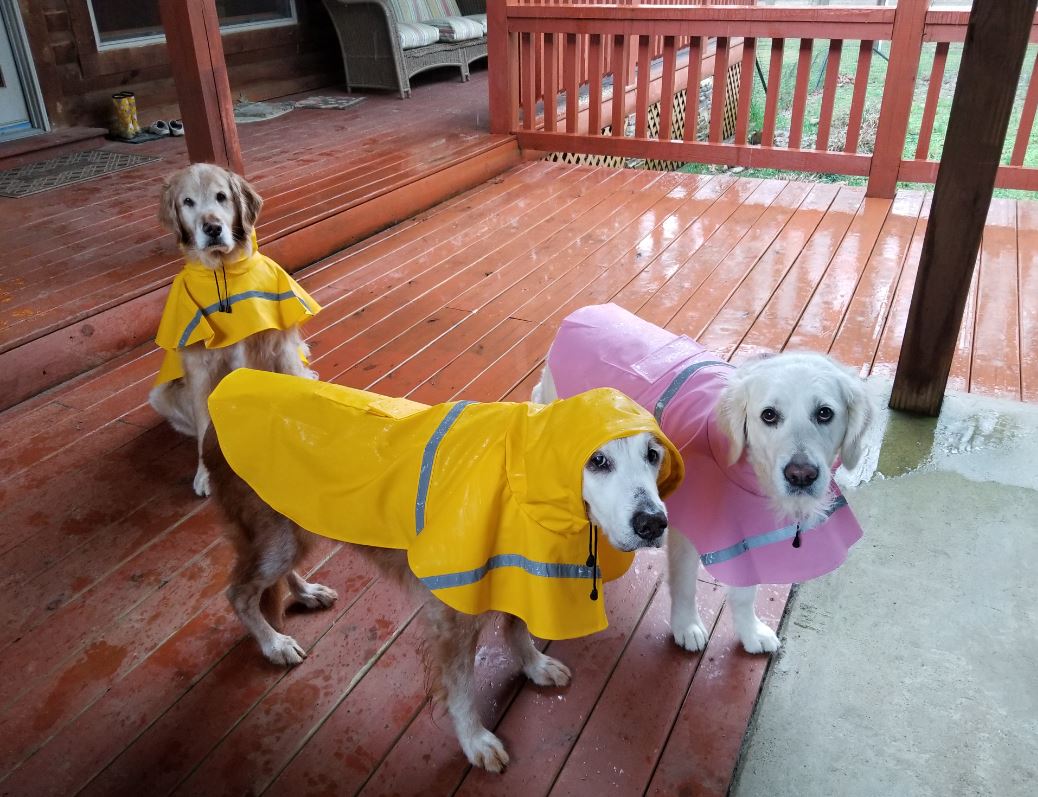 Augie was born on April 24, 2000, and was in a loving home until 2007 when a divorce during the housing crunch led to her being listed on Craigslist. Thankfully a wonderful second owner came through. Years later, Augie’s second owner had to go into assisted living and had to surrender the dog.

“In September 2014 we got a call from a social worker out of St. George, Utah, about a client going into assisted living who had to surrender her golden,” Jennifer recalled. Jennifer drove to Utah to pick up the dog.

The dog went into GRRSN’s Forever Foster Program at 14 years old and Jennifer and Steve officially adopted Augie when she was 16. The couple had no reservations about adopting a senior pet, having seen many lovable senior dogs come in and out of GRRSN over the years.

“We had no regrets,” Jennifer said. “I have a special place in my heart for seniors. We knew we were retiring so we made her a special part of our family.” 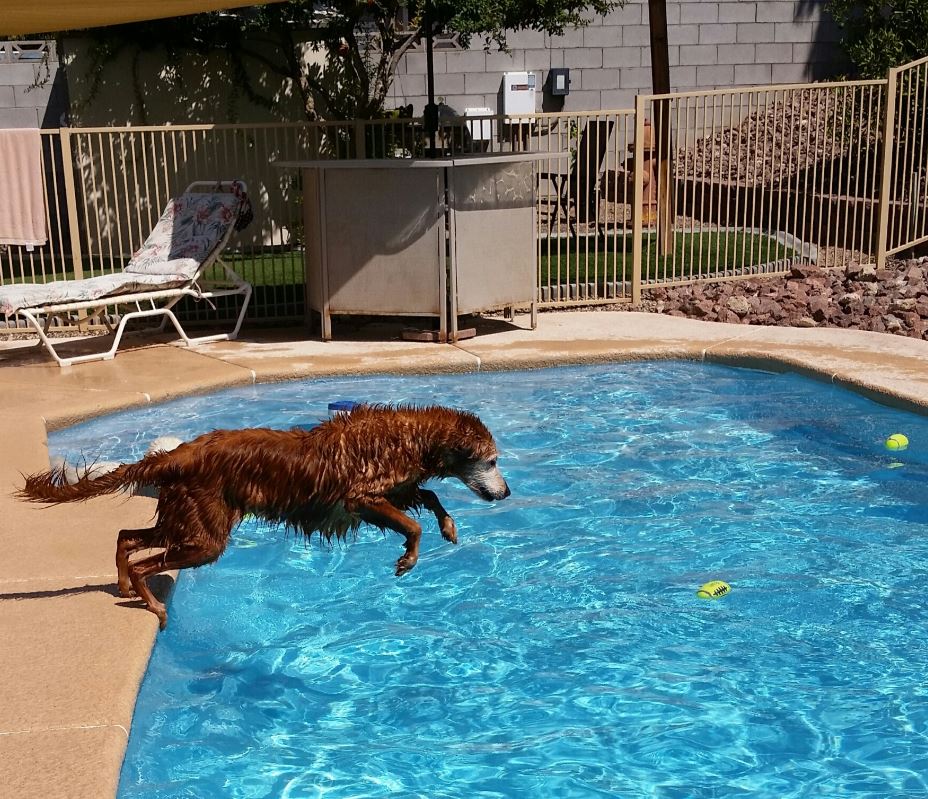 From previous cross-country RV trips with four dogs and two cats to swimming in the pool for a game of fetch, life with Augie has been about fun and lots of love. Age has slowed her down a bit and she stopped swimming when she was 17, but she still loves her car rides.

This very special senior has a wonderful personality and temperament. Check out Augie with some adorable rescue puppies:

Augie is basically a healthy dog but has some kidney problems, so she is on special food and supplements. Jennifer and Steve keep a close watch over Augie since she isn’t as stable on all fours as she used to be.

“She doesn’t frump around and most of the day she lays on strategically placed dog beds,” Jennifer said. “She is alert and wants to know what you are doing. She wants to go out and be with her humans and siblings. Although the dogs all get along, we have to hold her back at the door so the others don’t knock her down. But for the most part they are respectful of her.”

Jennifer and Steve, who moved the family to Oakland, Tenn., in 2018, did not expect that Augie would live so long. “Even when she turned 18 we didn’t expect her to live longer, but then she hit 20 and we got really choked up and our hearts were pounding,” Jennifer said. “We felt just so blessed that she had these God-given genes and she is still with us.”

The couple also didn’t expect Augie’s 20th birthday celebration to grab so much attention, but they did want to share her landmark day. “It’s such a milestone for her to live this long,” Jennifer said. “It’s a celebration and we just wanted to share her with everybody.”

They have received lots of love and support from across the miles. And, while overwhelming, it’s good news. “I hope she’s making people smile,” Jennifer said, adding that it’s something good to happen in the world right now. 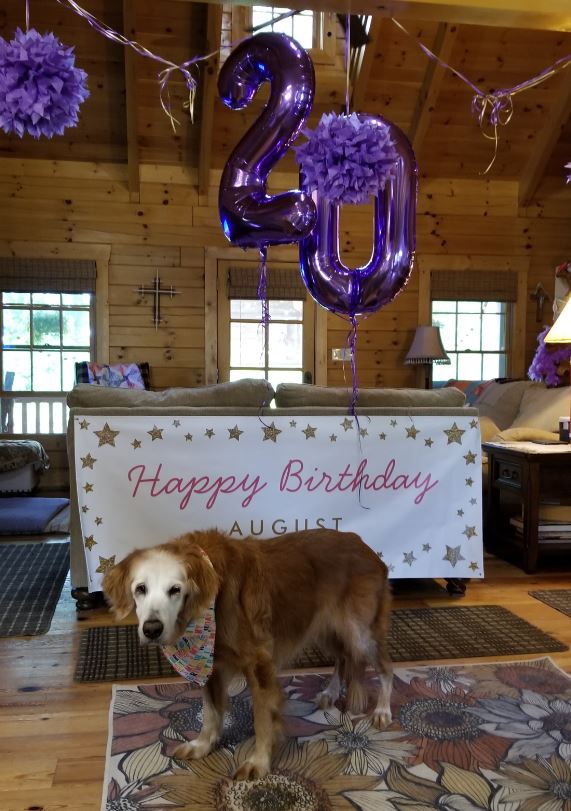 Jennifer wants everyone to know that it’s OK to adopt a senior dog as she and Steve did with Augie. “Give that dog a home and let that dog live out the years in dignity and as happy as can be with a loving family,” she said. “They don’t expect much and just want to be loved and cared for.” 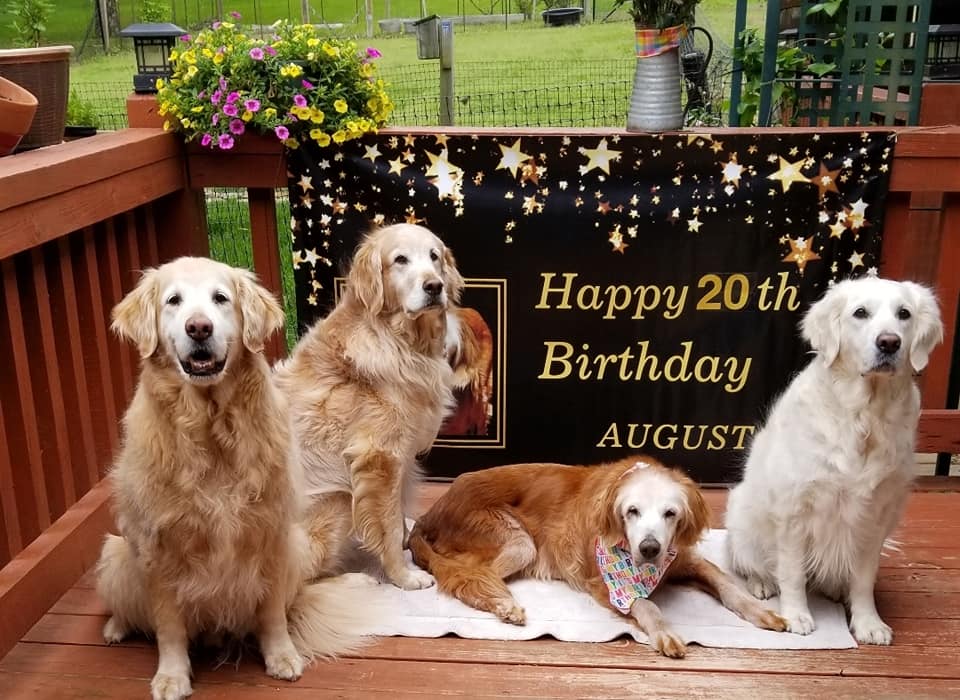 Augie’s face might be all white, but don’t let her fool you. This senior dog is still enjoying her life albeit a bit slower. So, Happy Birthday Augie! Save a piece of cake for the rest of us as we celebrate you.