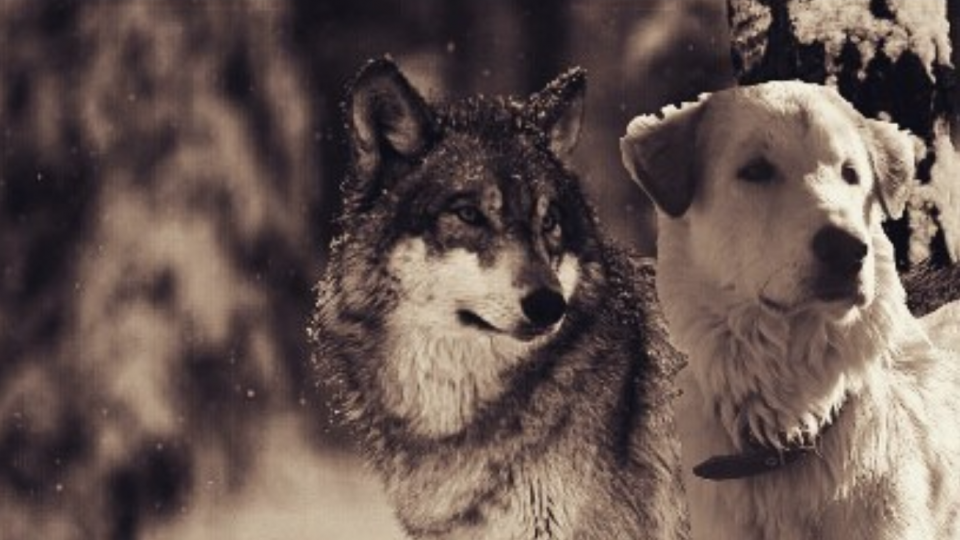 Though it’s sometimes hard to believe, our modern canine friends are related to wolves—most closely to the gray wolf. The two animals are thought to share a common, extinct wolf ancestor. But dogs and wolves are very different in terms of evolution and behavior.

So, what are the major differences between wolves and dogs? Read on for all the reasons that these animals are distinct from one another, and why we should appreciate them both.

First: same species or not?

This question is a bit complicated, actually. For years, wolves and dogs were considered separate species: canis familiaris and canis lupus. However, more recently, scientists generally agree they are both a sub-species of canis lupus. Unlike dogs and foxes, wolves and dogs can reproduce, creating the controversial wolf-dog. When two animals can create a fertile offspring, they’re considered to be of the same species.

You can read an excellent in-depth analysis of the question of wolf vs. dog species classification here. And for further understanding about the dog genome, this is a dense, yet fascinating, breakdown from Nature.

The obvious place to start is with appearance. Wolves’ heads are much larger in comparison to their body size than dogs’ heads are. But even though their heads are big, their chests and hips are narrow and they have long legs and big paws. All of these help them in the wilderness (where it can get pretty rough), and those huge paws help them run long distances at really high speeds.

Dogs, on the other hand, generally have wider hips and chests and much shorter legs. They bob around more when they run, versus the wolf, who is smooth and sneaky.

They also have very different jaws, which makes sense considering their diets. Wolves need big, strong jaws to crush bones, while our house canines just need to make sure they can chew their kibble and gnaw on their toys.

Weirdly enough, they do have the same amount of teeth (42!), even though the domesticated pup ones are quite a bit smaller.

Eye color is another trait that wolves and dogs don’t share. Dogs have eyes that range in color from blue to brown. Wolves, on the other hand, always have eyes that are shades of yellow or amber—but never brown.

Their coats are also unique. Dog coats can be all kind of colors, whereas wolf coats are generally white, black, gray or brown because they depend on camouflage for survival.

Wolf tails are very straight, and those giant paws have two extra large front toes, which are webbed to help with swimming and wandering through the snow.

The way that dogs and wolves interact with the world, and especially with humans, is very different. Our canine buddies are generally social and view us as family; they’ll even learn how to read and understand our expressions.

Wolves are tight with the family units they form early on, but they’re definitely not accepting of strangers, and will never look to humans for affection or guidance—they’re far too independent for that.

Much research has been done lately about the different ways that dog puppies and wolf puppies develop, and it has been discovered that dogs are slower to develop and don’t open their eyes or socialize as early as their wolf counterparts (at four weeks, versus the wolf’s two weeks).

Also, wolf pups are only born in the spring, so that they can become stronger and sturdier before facing winter. Domesticated female dogs can have puppies any time of year.

. Wolf Family. Photo by @johnemarriott Blizzard waits for the pups from the Pipestone pack to join her for a walkabout along the Bow Valley Parkway in Banff National Park. #nature #wildlife #wolf #wolffamily #worldofwolves #Banff

In a word, no. Both dogs and wolves can be somewhat trained, though a wolf can never be domesticated.

Why? Because domestication is the result of years of breeding. A recent study does show that wolves raised by humans can become attached to those humans, but they never replicate the behavior of domesticated dogs. The lead author of the study cautions people that wolves should remain wild animals.

Both vocal, both diggers

Dogs and wolves both like to get vocal, although wolves tend to howl rather than bark like dogs do. Both also dig holes—although for the wolf, this is how they look for food, make a den for their pups, and find a cool spot during scorching hot months.

Their diets aren’t exactly on par. Wolves are carnivores and subsist mostly on animals like deer, moose, and buffalo. They’ll eat smaller birds and mammals but they prefer bigger, meatier game. Dogs also love meat, but they’ve learned to be more open to the variety of foods their humans offer them.

It’s clear that there are a plethora of differences between domestic dogs and their wild friends out in nature. Though wolves are fascinating and majestic creatures, they remain out of our reach—and there’s nothing like being able to give your canine best friend a cuddle, is there?