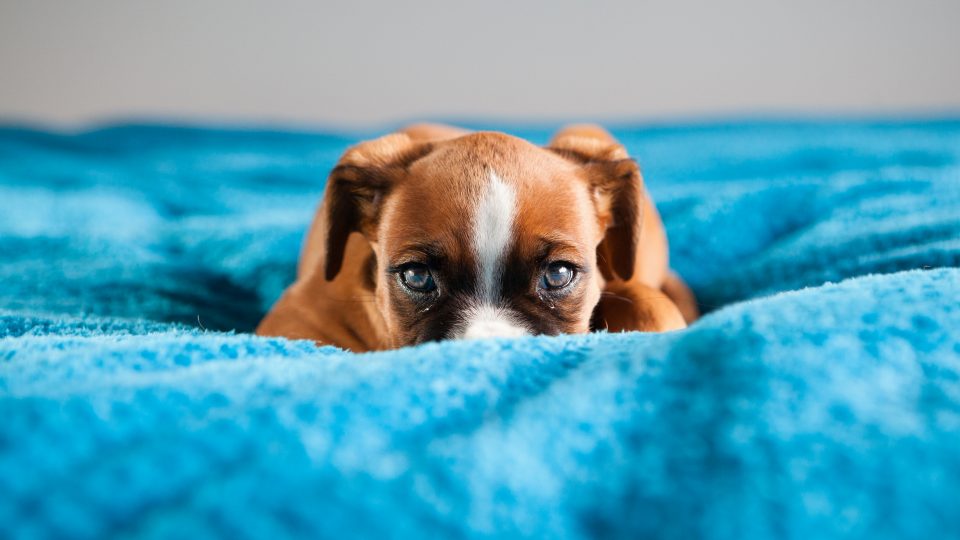 Does your dog bark every time a man walks by? Do they shake or whine when a man approaches? Fear of men is a common phobia in dogs. We’ve heard many stories like this, in fact. Scout, a collie mix in Seattle, barks at the door no matter who’s coming up the stairs—but if it’s a woman opening the door, she stops barking and wags her tail. If it’s a man, she’s more likely to growl, back away, and keep her distance.

Scout’s owner, Saundra, makes sure to keep Scout on a leash when male visitors arrive, and she’s arranged for Scout’s Rover sitter to be female. Her dog’s behavior puzzles her. She doesn’t think Scout has had bad experiences with men in the past.

Most of us assume that dogs who are afraid of men have been abused by or had traumatic experiences with men. While this may be true (sadly), it’s also true that many dogs fear men without this traumatic history. Your dog’s fear of men is most likely caused by a combination of social and physical factors.

Note: As a society, our understanding of gender roles is increasingly nuanced. In this post, we’re using some broad generalizations to talk about differences between “women” and “men.” Keep in mind that these traits and behaviors are not strictly separated along gender lines.

Read on to learn some of the most common reasons dogs are afraid of men, and how to help your dog overcome their fear. 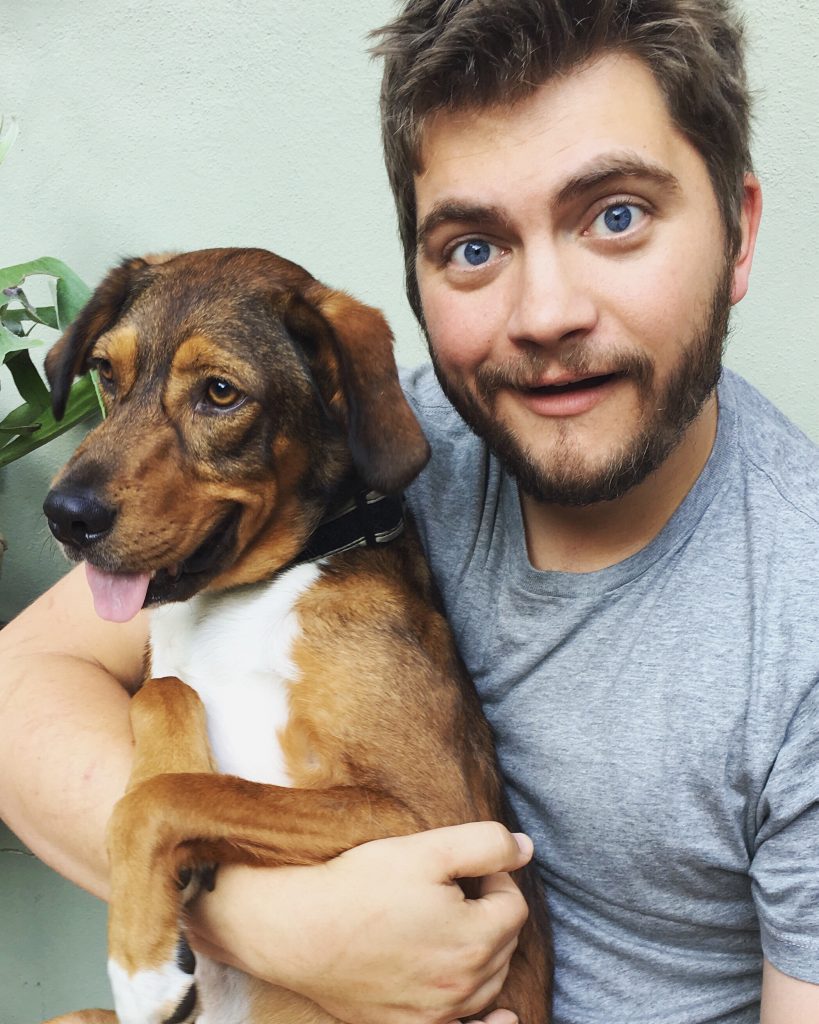 Some dogs fear men due to how they perceive more “masculine” behaviors. These include:

Of course, those aren’t strictly male behaviors! But even some scientific studies conducted along binary gender lines show that differences in “male” and “female” behavior impact dogs’ perception.

Consider a 2010 study published in Current Biology that asked volunteers to observe the motion of specially lit human subjects. The volunteers said that “masculine” subjects appeared to be moving closer to them, while “feminine” figures appeared to be walking away.

As noted dog behaviorist Patricia McConnell writes, “fearful dogs are ALWAYS more afraid of something coming at them than they are at approaching something themselves.” If men appear to be approaching in more direct or threatening ways, dogs may fear them more than women. 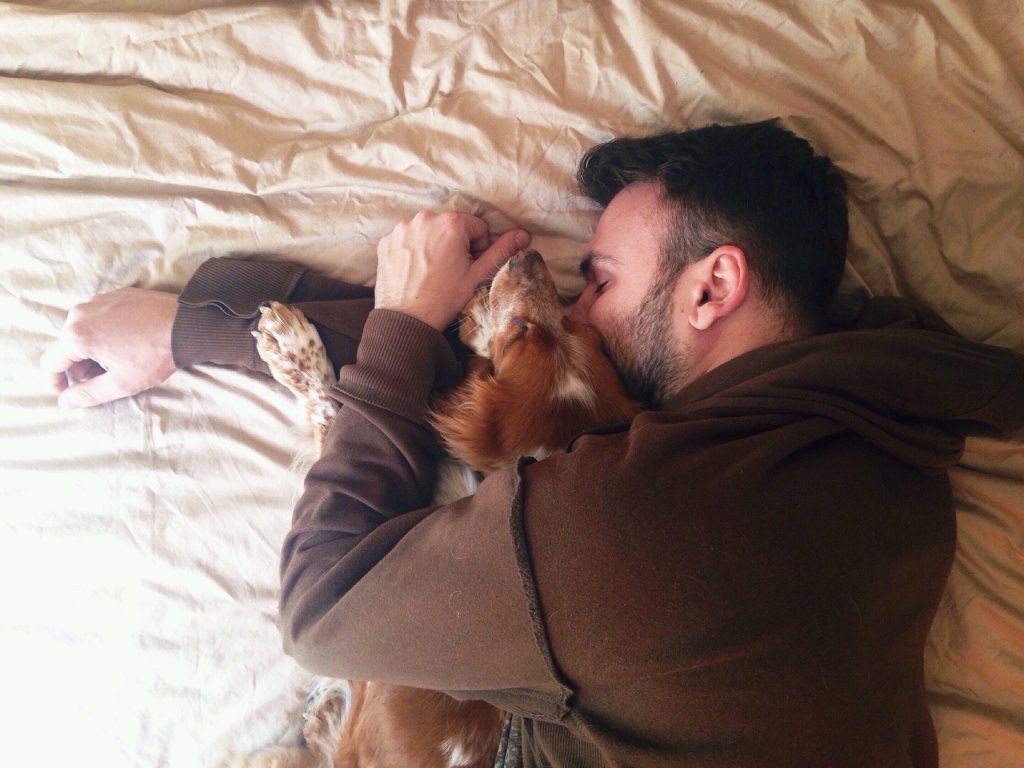 The physical traits of some men can be confusing, and even threatening, to dogs who haven’t spent much time with them. For example, here are some features that may frighten dogs:

Some of these are easy to control. For example, you can ask guests to remove their hats. In the long run, socialization and desensitizing your dog are the best ways to help your dog overcome the fear of male physicality.

One of the main reasons dogs may fear men? They haven’t spent much time around them—or they’ve spent time with only one man in particular, rather than a variety of them.

During the important puppy socialization stage, dogs should meet all types of people. Puppies who aren’t socialized with men may become fearful around them as they age. Seems like a simple proposition, but the truth is, socialization is more complicated than it sounds. It’s an ongoing process, and not always one that you can control, especially if you’ve adopted your dog later in their life.

However, the basic principles apply to puppies or adult dogs: give them plenty of positive experiences with a variety of people in a variety of settings. Check out dog-friendly bars, take a stroll downtown, arrange a puppy play date, bring your dog for a weekend with the grandparents—it all counts. Plus, it’s bonding time for you both.

This goes beyond the puppy years! Help your dog remain comfortable with all sorts of people by providing positive, rewarding experiences as they age.

Bad experiences at a critical time

Painful or scary experiences do cause fear, of course. This is especially true if something has happened during a fear period, typically when dogs are between 8-10 weeks old and then later between 6 and 14 months (or up to two years old). Fears that dogs form during these periods can stick with them.

Dr. Jennifer Summerfield, author of “Train Your Dog Now!” explains, “a single frightening or painful experience during the fear period can have a lasting impact for the rest of your dog’s life.” This is called “single-event learning,” and it means that one bad event can trigger an intense reaction in your dog from that moment on.

If this is the case, it’s important to try and understand the incident that triggered your dog’s fear. Then work on desensitizing your dog to that fear. That means gradual exposure to the feared object at a pace your dog can tolerate. VCA Hospitals offers a helpful, thorough guide to this approach.

More on helping your fearful dog

It’s a ruff life having a pooch on set at @boohoomanofficial ????❤️ @stantheman_2018 now has Instagram! Give him a follow! #dog #stantheman #boohoo #boohooman #bostonterrior #tattoos #ink #mananddog #guyswithdogs

If your dog is fearful around men and you want that to change, start by talking to a trainer or behaviorist. It’s helpful to have an expert assess your dog and give advice. In general, increased socialization and gradual desensitization will help.

Take it slow, be calm and persistent, and show your dog that everything’s ok. You’re a secure base, and that’s what matters most to your dog.

Find more detail about dog fears, socialization, and anxiety in these posts.