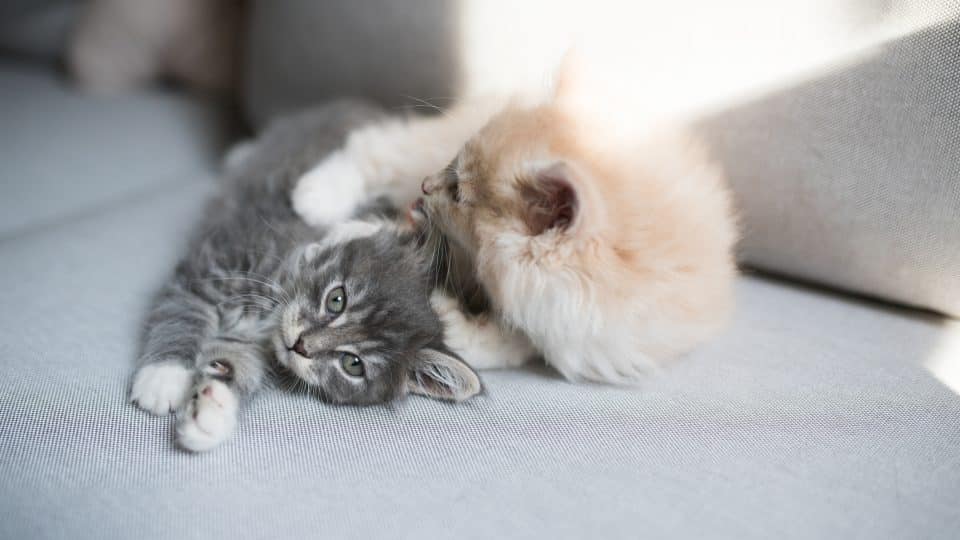 Catching your cats licking each other can evoke various emotional responses from “aw” to “ew”. So, what’s the deal with your cats treating each other like a fresh sardine-pop—why do cats groom each other and us?

With 30 to 50 percent of their day spent grooming themselves, cats are clearly skilled at self-care. Cats have a special tongue to thank for their cleanliness. Their tongues don’t actually resemble sandpaper, despite how rough they might feel. Covered in hook-like hollow hairs, cat’s tongues are more like a shampooing comb—amazing, right? 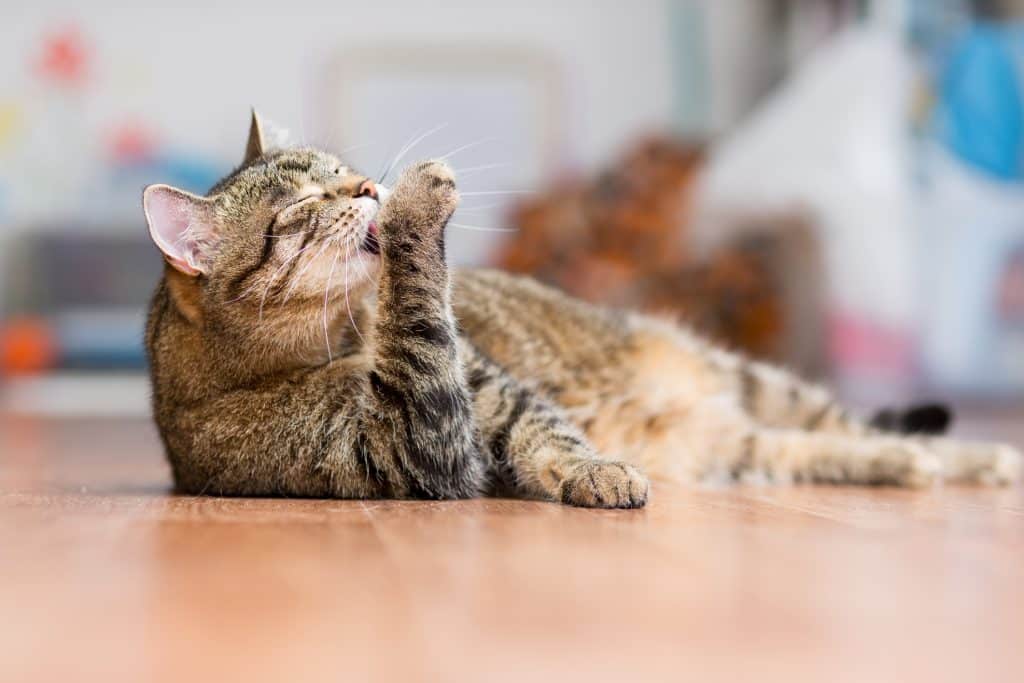 1. Cats Groom To Show Their Bond

“They have to be individuals who have a relationship—a special relationship,” Dale says. In outdoor colonies, this relationship is typically reserved for close family members. Littermates, and mothers and their kittens may have this bond, for example. Also, cats who have been together for an extended amount of time, (typically years not months) can show this level of connection.

If your cat gives or receives a bath from another cat, chances are they’re bonded, says Andrea Arden, pet training expert. “If two or more cats choose to be close to one another that suggests that they are comfortable with, and benefit from, each other’s company.” 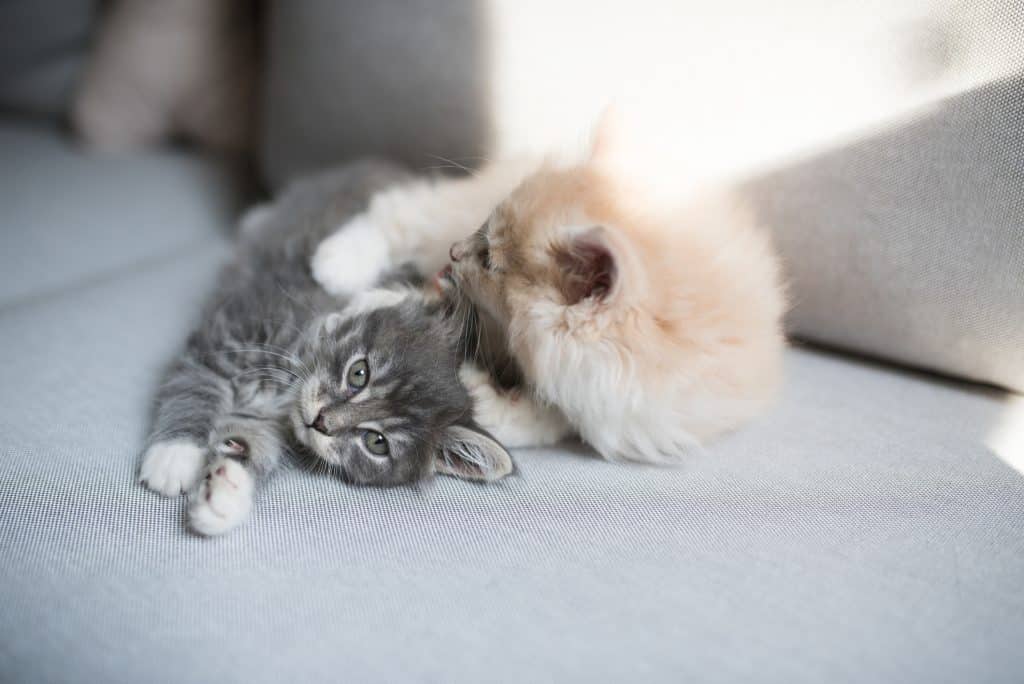 Bonding isn’t the only reason cats groom each other—at least in outdoor colonies. Allogrooming is important for survival. Aiding in the removal of fleas, ticks, and other life-threatening parasites.

Indoor cats might allogroom, in part, because their survival instincts tell them to. But that drive is likely minimal—especially if your cat is up to date on flea preventatives. More likely, Dale says, indoor cats allogroom because “it’s social and a means of communicating mutual trust.”

“Cats don’t like to be dirty,” Dale says. And what better way to clean those hard-to-reach spots like the top of the head than a trusted feline friend?

Plus, just like cats love to be scratched on the top of their heads, on their cheeks, and under their chin, they love for their closest companions to groom those same places. Cats lick each other’s heads and other facial features because all these spots have scent glands that release pheromones.

“These pheromones are chemicals that provide information for communication with other cats. This is part of why much of allogrooming is focused on these areas of the body,” Arden explains.

Maternal allogrooming is one of life’s first experiences for a newborn kitten. Mama cat will immediately clean her young after they’re born, grooming to stimulate elimination and clean up after her little ones.

As kittens develop and learn to eliminate on their own, mom continues allogrooming behaviors. “While hygiene is one of the main underlying factors for mother cats to lick their kittens, maternal allogrooming also serves to support bonding, to provide comfort, and to teach them to groom themselves,” Arden says. 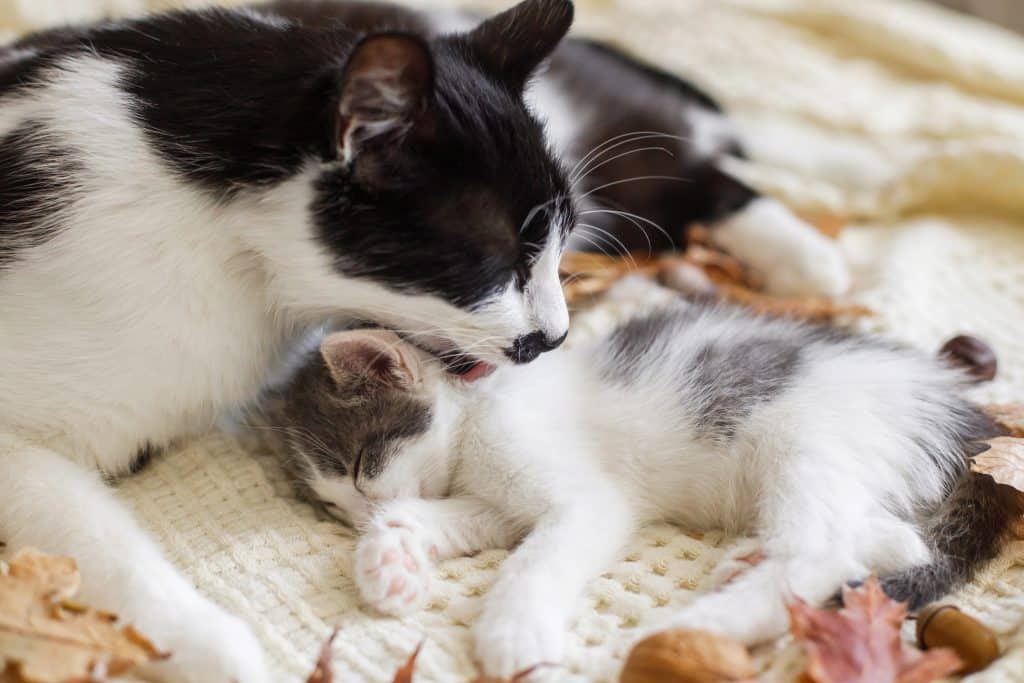 5. It Can Signal Health Problems

According to Dr. Louis DelGiudice, DVM, National Emergency Specialty Director at AmeriVet Veterinary Partners, a cat licking themselves excessively could signal skin inflammation or itchiness. Common causes include parasites like fleas or a food or contact allergen.

“Many cats form close attachments to their feline housemates and can be quite in tune with their emotional and physical state,” Arden says. Whether your cat is excessively grooming or not, other cats in the house could pick up on their change in health. “Other cats might spend more time in close proximity to them and groom them more frequently.”

According to Young-Williams Animal Center, it’s not true that a cat’s saliva has healing powers. Despite popular belief, a cat’s mouth is full of harmful bacteria (like all mouths!) that could cause an infection. Plus, those comb-like hairs on a cat’s tongue could easily reopen a healing wound. So, discourage your cat or other cats from licking wounds.

“Being aware of your cats’ baseline behavior to recognize any behavioral changes is an important part of identifying possible health issues that warrant contacting your veterinarian,” Arden adds.

“Cats being cats, I suppose they’re dominant over humans,” Dale jokes. But “when cats allogroom people, they are not expressing dominance.” However, if you live in a multi-cat household as I do, then you might have noticed one cat always licking the other. So, do cats lick each other to show dominance?

Some sure-fire signs that your clowder (a group of cats) is struggling with hierarchical dominance include true aggression, marking territory, and blocking other cats from accessing the food bowl. Sure, household cats may allogroom to establish and maintain hierarchy, Arden says, but it’s more likely these cats are actually avoid serious conflicts. And allogrooming is to thank in these situations. Here’s how it works:

“A cat might lick another cat lower in hierarchy as a way of calming themselves. In addition to redirecting their aggression the allogrooming is possibly a bonding moment,” she explains. “But this does not mean that a lower-ranking cat is always on the receiving end of grooming.” As we said, cat-to-cat relationships are complex, and one interaction isn’t a tell-all sign of your clowder’s social life. 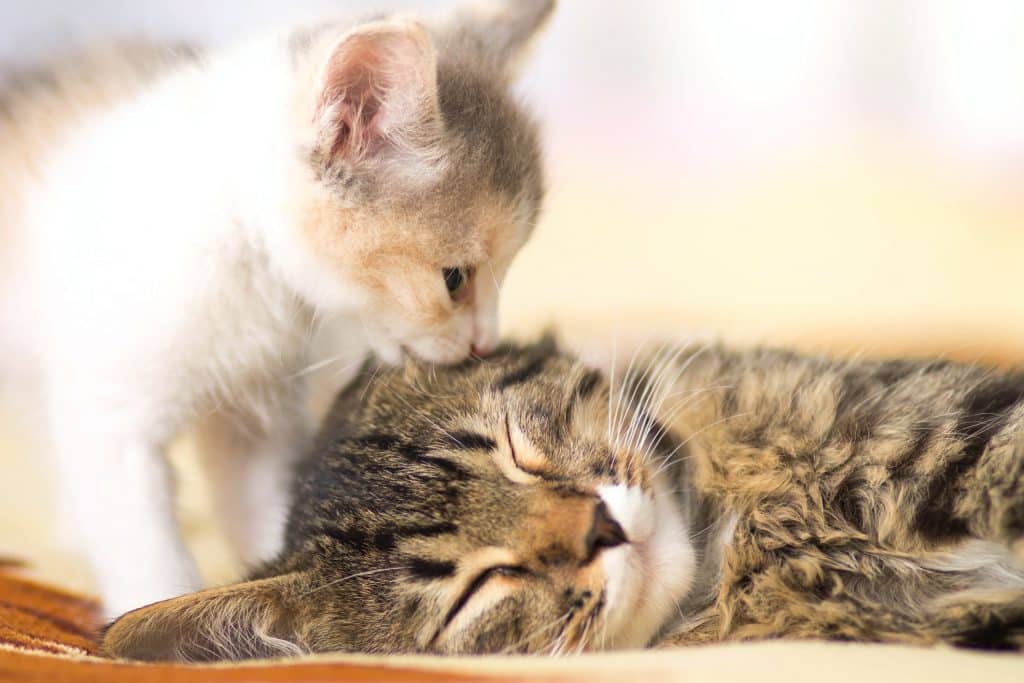 Why Do My Cats Lick Each Other And Then Fight?

“Cats have limitations of how long we can pet them. Well, it could be that individual cats have their threshold as to how much grooming they can take, too,” Dale says. Cats are usually good at reading another cat’s body language. But if signals of overstimulation are missed, an increase in tension could be the result.

Signs of overstimulation in cats include:

Allogrooming can also be a transition to a play fighting session, Arden adds. “Play mimics the same behaviors as fighting or hunting, so it’s important to get to know the subtleties of your cats.”

What’s the difference between play fighting and actual fighting?

According to Dr. Kat Pankratz, DVM, DACVB, a veterinary behaviorist at Animal Behavior Clinic in Portland, Ore., play fighting in cats is balanced, typically quiet, and without injuries. When cats are fighting, one cat typically tries to flee while being pursued by the other. There may be hissing, growling, or urination, and aggression could result in fur pulling or scratching.

“Social tension between cats can be subtle such as staring with very subtle stiffness in musculature,” Dr. Pankratz says. “This can be difficult for people to notice.”

It might be tricky to spot the signs of true aggression in cats, it’s important to recognize and diffuse the situation. Cats don’t have a lot of tools to work through social tension, Dr. Pankratz says, and a sour relationship can be difficult to repair.

One of those few tools cats have to repair a relationship is allogrooming. “Mutual grooming can be seen post-conflict as a way of reconciling,” Dr. DelGiudice says.

There’s no need to stop your cat from play fighting, but real tension (which typically doesn’t follow allogrooming) can be defused by distracting your cats with a toy or food and separating them when necessary.

Allogroomig is a good thing, Dale concludes. And if you’ve spotted your cats licking each other, they’re likely fonder of one another than you might have thought.

“Cats allogroom humans, too,” Dale adds. To replicate allogrooming and communicate love and trust in a way your cat truly understands, incorporate a brushing session into your daily or weekly schedule. Plus, the grooming experts at Cats in The City in Portland, Ore. say brushing at home can save you money in the long run.

“Most cats maintain their coats well for the first five to eight years of life. After this, they commonly need extra help with their coats,” says Dr. Daniel Lioyryan, Ph.D., cat groomer and co-owner of Cats in the City. Without regular grooming early in life, that extra help could mean a trip to the groomer. “So, if you want grooming to be a bonding experience between you and your cat, start bonding with them through grooming early,” the kitty groomer says.