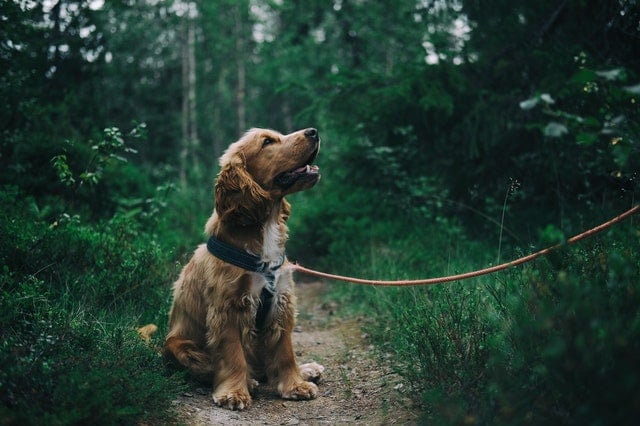 As a puppy parent, your number one priority is keeping that little ball of fuzz safe. But while the hazards you can see—cars, electrical cords, and so on—pose a threat, the ones you can’t—diseases like distemper and parvovirus—are just as scary.

Lucky for us, science has a solution. With a schedule of early vaccinations, puppyhood diseases are almost entirely preventable. There’s just one problem. At the same age that a puppy receives their first three sets of vaccinations, they are also going through an essential developmental phase. Both end at 16 weeks of age.

Behaviorists know that puppies who are not socialized in a pressure-free, positive way to a variety of new environments and individuals before 16 weeks of age are far more likely to develop behavioral issues including fear, anxiety and aggression in adolescence. And fear, anxiety and aggression are just as likely to negatively impact a dog’s health than puppyhood diseases, if not more so.

To truly keep a puppy safe then, it’s not just the veterinary perspective parents need to consider, but the behavioral one, as well. Here’s how to navigate your pup’s vaccination schedule while safely providing them with the socialization opportunities they need to grow into confident dogs. 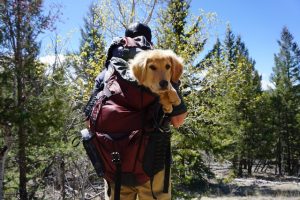 When can puppies go out for the first time?

In their first 16-18 weeks, puppies typically go through three rounds of vaccinations. After each round of vaccinations, there is a five to seven day waiting period until they are fully effective.

Contrary to the advice of some more traditional vets, puppies can, and should, go out five to seven days after Round 1 of their vaccinations. If you have a fenced yard, it’s okay for your puppy to run around there (yes, even if wild animals occasionally pass through) but because they are still highly vulnerable at this stage, their feet should not touch the ground in public spaces yet. The one exception to this rule is if you live in an apartment building. In that case, pick one spot outside the building for your puppy to potty. Carry them to the potty spot, let them sniff around and do their business there, then carry them back home.

Just because your puppy’s feet can’t touch the ground in public though, doesn’t mean you can’t still get outside. Take your little one on adventures while safely inside a carrier, bag or backpack. Lay a large blanket out on your stoop or at a park and hang out with your (leashed) puppy on your “island.” Take your puppy on car rides and visit the homes (and fenced yards) of friends and family. As you introduce your puppy to new environments, encourage their enjoyment by providing plenty of reassurance and treats. If at any time they seem overwhelmed or frightened, remove them from the situation as quickly as possible.

At this stage, it is okay for your puppy to interact with puppy-friendly dogs you know personally and which have been 100% vaccinated. However, because it’s crucial to help your puppy have positive experiences with the new things they encounter, keep them away from dogs who aren’t tolerant of puppy shenanigans. 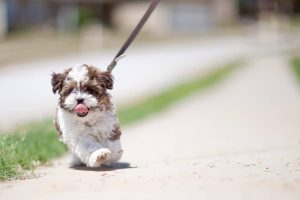 When Can Puppies Go for a Walk for the First Time?

Five to seven days after vaccination round two, your puppy is ready to go for their first walk. While they are now much more resilient than they were just a few weeks ago, it’s still important to continue to avoid things that could make them sick.

On walks, keep to paved surfaces like sidewalks and parking lots. Stay off of grass or dirt trails where the urine or feces of unvaccinated dogs are harder to avoid. Puppies who have had their second round of vaccinations can also visit the beach, just stick to locations or times of day that are less crowded.

Continue to avoid unfamiliar dogs on your walks. If another dog walker approaches you and asks if their pet can say hello, politely inform them that your puppy hasn’t been fully vaccinated yet. Most dog owners will understand.

After this set of vaccinations, your puppy is also ready to attend a puppy social—a play-group just for puppies under 18 weeks of age—at a local dog training facility, pet supply store, or vet. Some socials even let pups attend after their first round of vaccinations. 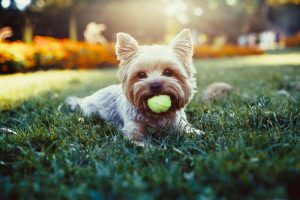 When Can Puppies Go to the Park for the First Time?

After your puppy’s third round of vaccinations at 16-18 weeks, they are finally ready to go to the park. In fact, at this stage they should be fully protected against the worst of the puppyhood diseases. That means puppy can say hello to unfamiliar dogs now, too.

The dog park is the one place you can’t go until your puppy is at least six months old (preferably even older, at least eight months of age). In dog parks, particularly enclosed dog parks, tensions can run high and an excitable puppy may become the target of an annoyed adult dog, or worse yet, a pack of them. Those early negative experiences, which can come back to haunt your dog in adolescence, should be avoided at all costs.