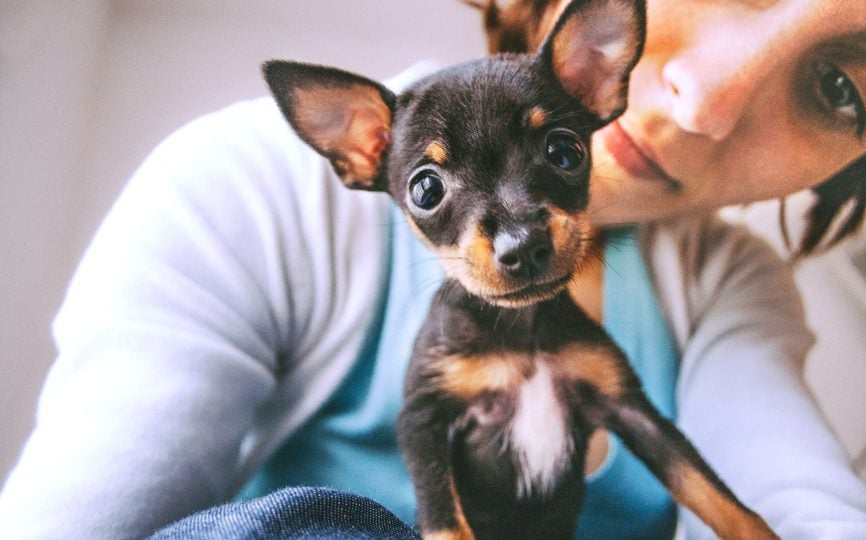 The first few months with a new pet are a blissful, exciting, love-filled time, but they’re not without their challenges. It’s not uncommon for new puppy parents to ask themselves, “What have I gotten myself into?” Thankfully, puppy development is well-researched and fairly predictable, and we’re here to help explain it all.

This guide to the first six months of puppy parenthood will walk you through your puppy’s development month by month, from the day they open their eyes to the day they get so big, you’ll wonder why you ever let them sleep in your bed in the first place. Read on for all the help you need to enter new puppy parenthood and raise an awesome dog. 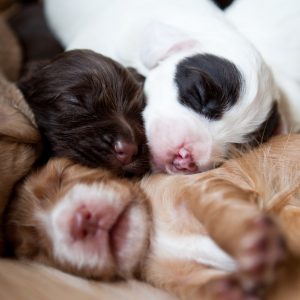 When puppies are first born, they’re dependent on their mamas for everything, and handling by humans should be limited (source). The first couple of weeks is a time to let nature take its course. If you’re getting a puppy from a reputable breeder, you may be making a visit or two to their home during this time to catch a first glimpse at your baby. You’ll see her squirming around with her littermates, nursing, and generally being a cute little slug until around three weeks in, when your puppy’s eyes and ears will be open.

By week four, your puppy will be walking. She should still be with her mom most of the time, but you and/or her shelter or breeder may start taking her on short “field trips” to other parts of the home to experience new and interesting sounds, scents, and surfaces. According to the Houston SPCA, the crucial third and fourth weeks a puppy’s life are known as the exposure period, during which your puppy will be learning all sorts of new stuff, including how to walk, play, and explore the world (source). She’s starting to look more like a dog! 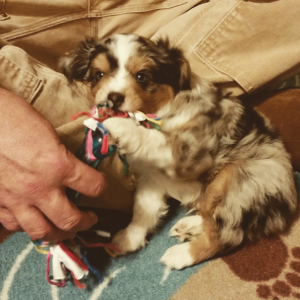 At about five weeks old, your puppy will be playing with her littermates, producing cute little barks, and generally learning how to be a dog. There’s a whole lot of developmental stuff going on in her brain right now: your puppy is learning play and social skills, and gaining physical coordination. At this point, she’s still mostly influenced by her mom and littermates (source), but she’s ready to start exploring the world beyond the teat. By week five, she’s ready for consistent human interaction, and by week six, she’ll probably know who her favorite people are.

During the second month of life, your puppy is also ready to start the basics of potty training. She’s still too small to “hold it” for long, so hourly potty breaks are best, and consistent positive reinforcement when she goes outside. It’s no use reprimanding a puppy for eliminating indoors; remember, she only just started going to the bathroom on her own (her mom was helping up until a couple weeks ago), and it will be several weeks before she has consistent bladder control. This guide from the ASPCA is a good start for potty training from age 5-12 weeks.

Towards the end of puppy’s month two, it’s time to consult a vet about starting vaccinations. Puppies typically get their first combo vaccination around six weeks old. Here’s a basic vaccination schedule for puppies, but remember to talk to your vet and make a plan for your particular puppy. 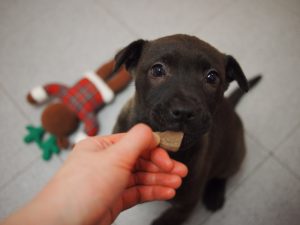 The third month of your puppy’s life is the most important stage for bonding, brain development, and training. Many pet parents won’t even meet their new puppies until they reach eight weeks old, but don’t worry that you missed out: month three is when the fun stuff really starts.

If you adopted your puppy from a shelter or rescue group, chances are she’ll already be spayed by now. Puppies can be spayed or neutered around 8-12 weeks old as long as they weigh at least two pounds. If your puppy came from a breeder or somewhere else, you don’t have to rush into having her fixed; while it’s perfectly fine for a puppy to be altered young, it’s common practice to wait until they’re closer to six months old to allow for more bone and muscle development (source).

Once she’s had her first set of vaccinations, you can start taking your puppy to obedience class, which is a great way to help her gain confidence and skills, as well as give her lots of positive socializing experience. During their third month of life, puppies go through a “fear imprint stage” and traumatic experiences can have lasting impact. It’s important to give them lots of comfortable, positive experiences to help them learn that the world is not as scary as it may seem. This can include meeting lots and lots of new people, being exposed to different environments and noises, and. The ASPCA has a handy socialization checklist to help you make sure your puppy is exposed to all the right things. 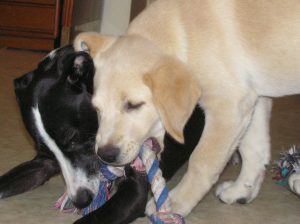 By 12 weeks old, your puppy’s personality should be pretty clear. You’ll know if she’s bold or shy, bossy or quiet, etc. Between 12-16 weeks of age, she needs continued socialization to make her as well-rounded as possible. Playing with other dogs will help your puppy develop good social skills, including bite inhibition, potty training, and bite inhibition.

Your puppy is also gaining more and more permanent teeth at this age, which could mean trouble if you don’t know how to handle it. Puppies use their mouths to explore the world, and as their adult teeth come in, they can get even more “mouthy” because chewing just feels so darn good. You can help your puppy use her mouth appropriately by giving her lots of chew toys, and gently redirecting her if she’s mouthy with your hands (more info here). 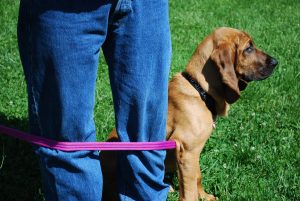 By this point, your puppy may be starting to push boundaries a bit and starting to act in ways you perceive as “naughty.” Keep in mind she’s simply continuing to develop; during the fifth month of life, dogs establish their place in the hierarchy of their homes and the world at large (source). You can help your pet by “puppy-proofing” the house to keep her out of mischief. This may mean using baby gates to limit access to certain rooms, investing in puppy-proof cabinet latches and garbage cans, and crate training to give you control over when and where she can explore.

Four- to five-month-old puppies are also testing their flight reflexes as they get more brave and exploratory in the world, and at this point, they probably aren’t ready for off-leash play. Positive reinforcement training, including ongoing classes with other dogs and their people, is the best way to keep your growing pup happy, healthy, and well-socialized.

By her sixth month of life, your puppy may be starting to look like a grown-up dog. But don’t worry, she still has plenty of puppy energy left. I’m not gonna lie: month six can be a toughie. You made it through potty training and teething, and now your puppy is officially an adolescent. Like most teenagers, six-month-old dogs can be moody and unpredictable, and may develop a “selective memory” for all the stuff you’ve been working on in training (source). But don’t worry, your puppy is well on her way to being a grown-up, and month six is a herald of good years to come.

If your puppy hasn’t been spayed yet, she may enter her first heat soon. Now is the time to have her fixed. First-time puppy parents can be nervous about having their pets spayed or neutered, but rest assured it’s the most common surgery performed on pets, and the benefits far outweigh the potential risks. You’re not depriving your dog of anything by having her fixed, and in fact you’re decreasing her chance of developing certain cancers and other diseases of the reproductive system. Spaying and neutering helps reduce pet overpopulation, and saves lives in the long run.

Once your puppy reaches six months old, take a moment to give yourself a high-five. You did it! You made it through the crucial first six months of your puppy’s life. Dogs aren’t considered fully mature until around 18 months, or 1.5 years old, so you may still have some work to do. But by now, you have a pretty good idea who your dog is, and chances are the two of you love each other like crazy. So get out there and enjoy life with your new best friend.
The information provided in this article is not a substitute for professional veterinary help.