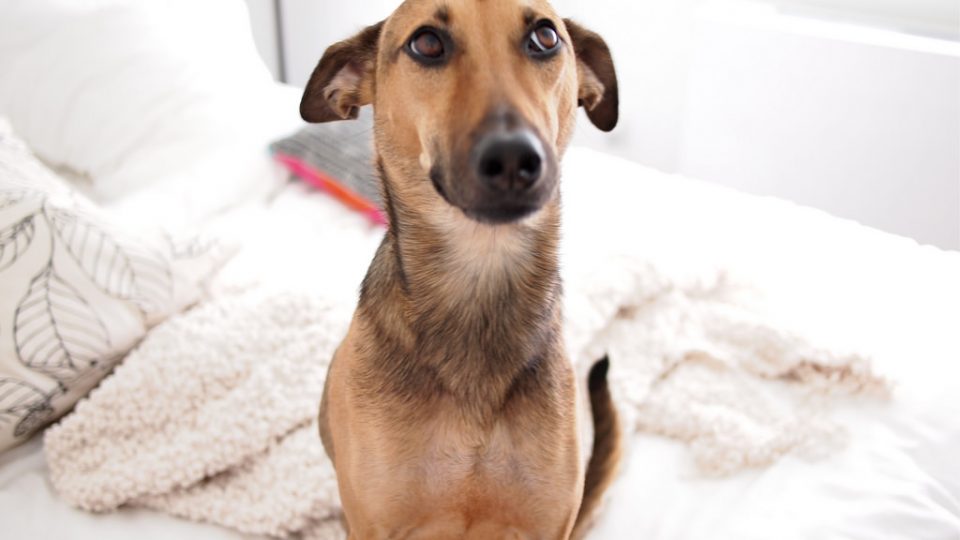 Formosan mountain dogs—otherwise known as FMDs, Taiwan dogs, or village dogs—are not officially a breed, but rather the dogs that live in the streets of Taipei. Their relatives live in locations across Asia and their ancestors have lived in close proximity to humans for thousands of years. Taiwan dogs vary in appearance, behavior, and personal history, but they are united by a number of unique traits. Charming, very active, and deeply goofy, these dogs are a rewarding handful.

Below are the most important facts and tendencies to keep in mind if you’re thinking about fostering, adopting, or approaching a shy Taiwan dog at the park.

8 Things You Need to Know About Formosan Mountain Dogs

Jacintha Sayed is the director of Saving Great Animals, a Seattle-based rescue organization that focuses on matching adopters with dogs by a responsible, thorough process. Jacintha told me that about three years ago, Saving Great Animals started working with Taipei-based Mary Choi, who runs the rescue Mary’s Doggies and provides detailed records of each dog’s medical information, personal history, and behavior.

“Most of the dogs are from the streets, from pretty horrifying conditions,” Jacintha says. “But out of the 500 or so dogs that Saving Great Animals rescues each year, only about ten will come from Taiwan. The chance for these dogs to find a home in Taiwan is minimal, and Mary works with several rescues in the US. It’s a challenge because of the sheer number of dogs on the streets.”

Made my eyes disappear while smiling just like my hooman ?

The community of Formosan dog families in the United States is very supportive and experienced in working with reactive dogs and rescues. Nearly 10 years ago, Leah from Seattle adopted her Formosan mountain dog and created a Facebook group for local Formosan dog owners. Now the group has more than 2,500 members spanning the west coast and a handful of cities across the United States. Together they share quirks of the breed, celebrate successes when socializing their pets, and help one another through stressful moments.

“The dogs, they’re all special,” Leah says. “They’re challenging. My dog still has behavioral issues. But some have been fostered, have been socialized, and no one’s a lost cause.”

But Not All Rescue Organizations Are Equal

It’s always important to invest time in researching potential rescue organizations, but it becomes even more complicated when the rescue is planning to fly the dog halfway across the world.

“Do your homework,” Jacintha recommends, and adds that it’s a concerning sign when the rescue organization wants adopters to meet them at the airport and take the dog home the minute it gets off the plane.

Jacintha’s ideal rescue organization takes time to get to know the dogs before they place them in a home. Her advice: “Make sure they can answer your questions about the dog’s personality, like how the dog is with children, and other dogs or cats. Ask for their medical records. Look for rescues that can answer all these questions.”

Jacintha says that Taiwan dogs are a popular choice for Seattle residents because “not everybody has a yard or extra elbow room, so 30 to 35 pounds can be a perfect medium size.”

While the dogs’ appearances are often very different, Leah describes “the traditional East Asian Village dogs” as “all black or all brindle, and they all have this pointy little Anubis face.” Often, they also have quirky and expressive ears, eyes, and tails, and all three can help communicate their emotions and intentions.

Hello! I am Levi, the formosan mountain dog. I am also known as a Taiwan dog. I am 10 months old. I was rescued by @marysdoggies in Taipei. When I was found, my right eye was swollen and wouldn't get better with any medications. The vet removed it and now I'm as happy and healthy as any other dog! I've moved all the way to Vancouver, BC, Canada. I am slowly teaching my humans that, with some work, I can be a very good family dog! I'm happy I have found a forever home! . . . . . . #levithefmd #formosanmountaindog #fmd #taiwandog #dogsofinstagram #dogsofig #puppy #puppiesofinstagram #puppiesofig #yvrdogs #yvrpuppies

“Some dogs lose limbs or have injuries from Taiwan,” says Leah, “and every now and then a dog gets sick for whatever reason. But with general health issues, they seem to be tanks.”

Formosan breeding is almost entirely accidental. While this adds to the number of dogs in danger that need homes, they don’t seem to pass down common health issues in the way that some pedigreed dogs do.

“The main characteristic that we struggle with when trying to place a Formosan is their shyness,” says Jacintha. “Sometimes their shyness is exacerbated by the fact that they didn’t grow up as puppies in someone’s home.”

Many Formosan owners bond over the experience of gently encouraging their dogs to interact and cuddle. Stephanie from New York has had lots of firsthand experience after fostering more than 30 dogs from Taiwan in the past three years. “A common trait I hear is that they’re skittish and fearful, but I think that’s a trait they picked up from living on the streets,” Stephanie says. “I’ve also fostered Formosans that have been very well-adjusted, very friendly, and just calm.”

Dada don’t be afraid! I’m here to protect you!

“Loyal” and “shy/standoffish” are some of the most common words used to describe Formosan mountain dogs.

“These are typically fairly shy and reserved dogs,” says Jacintha. “They pick a person who they’re really bonded with and they’re loyal to that person. They tend to be a little bit weary of strangers. If you want to take your dog to the office, and have the dog kiss everyone’s face and be super social—a Formosan probably isn’t the right dog for you.”

With Love and Support, They Can Thrive

“My dog [pictured above] was my first foster,” says Stephanie. “She was super fearful and skittish.”

“She was supposed to be fostered by another family and they decided to return her after less than 24 hours, because she was sitting under a table growling at them.” The first time Stephanie met her dog, she narrowly avoided a bite.

Stephanie says, “She’s so bonded with me, she’s so sweet and loving. She’d usually shake when there were new people in the house or approaching her. I think it’s fine that she didn’t want strangers near her, and I haven’t pushed her. But it’s been three years and she’s opened up a lot—she’s been letting people touch her recently.”

Formosan mountain dogs have a variety of energy levels, but many are the get-up-and-go type always ready for a hike, an adventure, or just some exercise.

In addition to their athleticism, Jacintha says that Taiwan dogs are “a great fit for people who want a strong bond with their dog.”

Insider tip! I’ve been training my roommate to carry me since I arrived. I’m getting too big for her these days so found this sucker!

Jacintha recommends Formosan mountain dogs to owners who are interested in “training and in having their dog be their partner.” The best-buddy payoff is great, but it means devoting a lot of time and effort to their needs—both physical and mental stimulation.

Their energy and smart, enthusiastic nature make them a good match for people who want to teach their dog to run agility courses or complete more advanced commands.

Formosan mountain dogs have dozens of alluring, spunky, hilarious looks ready to go at any moment. Those puppy-dog eyes can transform in so many ways.

They can also be competition-level derps.

Their goofy enthusiasm is so pure and contagious.

Their Cuddles Are Magic

They have plenty of energy, but Formosan mountain dogs still love to snuggle up to their favorite person and take a nap after a long day.

They’re very cute at bedtime, often curling up into a tight ball before sleep.

But in every way, Formosan mountain dogs aren’t predictable. Their sleeping positions are as unique as their looks, histories, and personalities.

Just in case you’re wondering what I’m up to ?