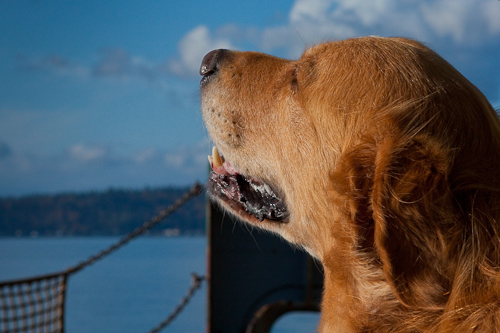 Seattle: City of coffee, rain, and…dogs? Pretty much. According to the last census, Seattle is home to more dogs than kids (and climbing!), and let’s be honest: If you have a dog, you probably count your dog as a kid, too. Thankfully, Seattle is known for being one of the most dog-friendly cities in the country. If you’re a pet parent living in the Emerald City, there’s a good chance you’ll identify with a thing or two (or eight) on this list. Have a sign to add? Sound off in the comments below!

1. You picked your shade of carpet based on how well it masks muddy footprints

…Or you just went all out and opted for the wood floors. (Fantastic choice—they look great in your Craftsman home.) Stark white carpet? No chance of survival. Shiny oak planks? A dog parent’s dream.

2. You own more pairs of dog shoes than human shoes

We mean, just because those shiny oak planks are easy to wipe clean doesn’t mean you’re not doing anything and everything in your power to not only protect your dog’s paws from the great (wet and cold!) outdoors, but also keep your floors muddy footprint-free. Everyday boots, activity boots—you name it, you own it.

3. You know every yappy hour in town… and it’s just like “Cheers”

Sometimes you wanna go where everybody knows your dog’s name. Seattle is pretty accepting of all things, and nursing a cold one with your furry friend is no exception—so long as your furry friend’s cold one is a bowl full of water (which they’ll often happily bring you), and not beer. Drinking establishments such as King’s Hardware in Ballard and Fremont Brewing Company are especially dog-friendly, and Fremont’s nearby Norm’s Eatery & Ale House is not only dog-friendly, but dog-themed. It doesn’t get much better than that.

4. Your daily outing on the Burke-Gilman could pass as a pet parade

Whether you’re walking, running, cycling, skating for fun, or just plain ol’ getting from point A to point B on your daily commute, there’s a good chance you’re sharing one of the country’s most beautiful (and trafficked!) trails with a whole lotta dogs. See also: Elliott Bay Trail, Green Lake…the list goes on and on.

5. You spend more time at the dog park than the people park

The good news is, they’re pretty much one and the same. You’re basically five minutes away from an off-leash puppy playground at all times, which means your dog is well-socialized (and exercised!) and you are, too. Be honest: How many friends have you made because your dogs made friends first? That’s what we thought. Thanks, Fido, for giving us not only daily trips to Magnuson Park, but friends, too.

6. Speaking of friends…you make new ones every day

It’s hard to find someone who doesn’t love dogs, and if you bring your 150-lb smushy-faced Mastiff out, welp, pretty much anywhere, you’re going to get a whole lot of people wanting to love on him. A dog works as a quasi friend-finder, and in a city that has a not-so-warm and fuzzy stigma known as the Seattle Freeze (whether you believe it or not!), it’s always nice to have a little help.

7. Your cubicle mate is a dog

One of the best things about Seattle being so doggone dog-friendly is that (almost) everyone is cool with it. From teeny tiny boutique advertising agencies to Rover.com to mega-corporations like Amazon, sharing an office—and your lunch breaks!—with Spot is the norm. We can dig it.

That’s right! Dog + yoga = doga, and it’s a thing. It’s a thing that you probably do once a day, stretching and chanting as your pooch helps you finally achieve that pose you’ve been struggling with for weeks now, and it’s a thing that brings the two of you together in a way you never knew possible. Namaste.
Top image via Flickr/David Conger