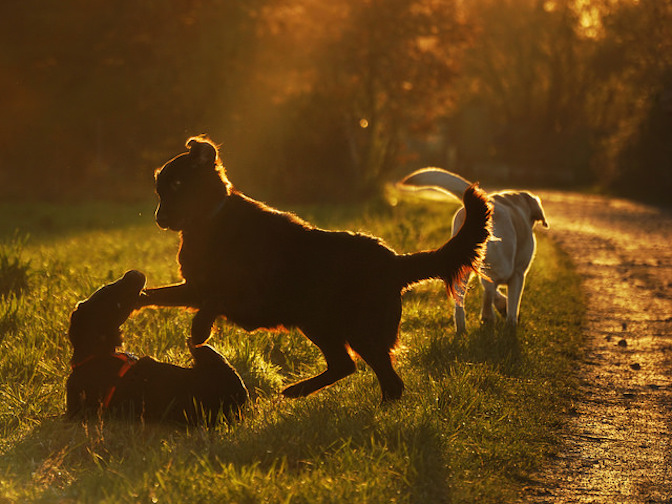 Dogs definitely sneeze for the same reasons we do—sometimes, at least.

Environmental irritants like dust certainly cause sneezing, though dogs are less susceptible to allergens like the molds and pollens that typically affect human sinuses.

Dogs will also sneeze violently and frequently if a foreign object, such as a blade of grass, becomes stuck in the nasal passage.

But you may have noticed an odd sort of sneezing in your dog—one that comes right in the middle of a raucous play session with another canine friend.

But why would a dog need to sneeze during a bout of fun and excitement? Do their noses get itchy from all the bouncing around? Is it a defensive tactic to distract the other dog and gain the upper hand?

Dog behavior experts believe this particular sneeze is part of a set of a communication tools dogs use to relate to one another—to signal cooperation, warning, deference, or an invitation to play. The sneeze in this context is a reminder to the playmate that the scrimmage is just play, not a true fight.

You may notice a dog sneeze just as play begins to escalate and become more intense. The sneeze is a cue to the playmate to keep things fun, light, and safe.

The play sneeze is also a sign the dog is having a great time! And it’s definitely fun to watch.

It’s a particular joy watching dogs frolic, chase, and nip at each other. Their energy is remarkable, and their goofy dance with one another is nothing less than delightful. A few random sneezes thrown into the mix only drive up the entertainment value.

When Sneezing Is a Concern

However, if your dog seems to be sneezing more frequently than normal, especially if it’s accompanied by other behavior changes, it could be cause for concern. Less common reasons for canine sneezing include nasal mites, infections, or even tumors. If your dog is experiencing frequent sneezing attacks, it’s a good idea to consult your vet to get to the bottom of it.

For More on How Dogs Communicate

Dogs communicate with us and with each other all the time, though we may not always know how to read their cues. Check out these articles for more on the wide, fascinating world of dog communication:

Learn to Read the Magic of Dog Calming Signals

Dog Speak: Understanding What Your Dog is Telling You

An Illustrated Guide to Dog Behavior