We’re all familiar with the classic doggie play bow, the unmistakable invitation to play that dogs use with other dogs and humans alike, and even other species. When I first adopted her, my young Rottweiler play bowed to one of my chickens (the hen was very confused and clucked nervously), and she still play bows with my sheep frequently. But what about some of the other behaviors we see when dogs are playing with one another, like bared teeth, growling and nipping? 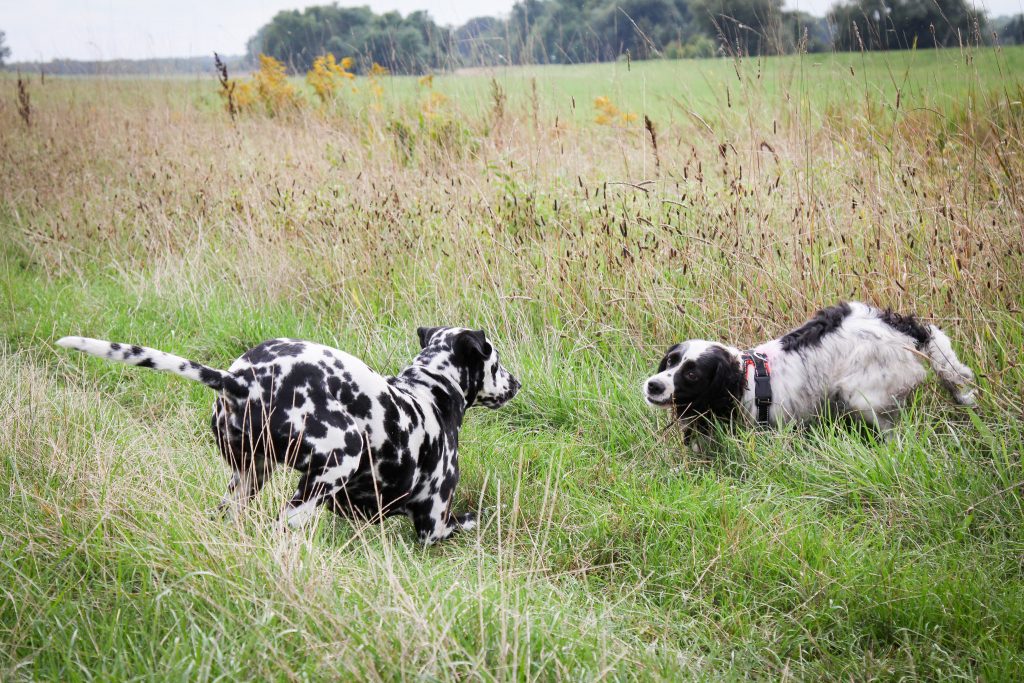 Beyond the Play Bow

If you’ve had your dog for a while, generally you know his moods and behaviors pretty well. Body language, sounds, and overall demeanor tell you how your dog is feeling. But if you’ve only had your dog for a short time (say, a newly adopted dog), or, if you take him to a park and another dog wants to play, it’s sometimes hard to know what’s going on, since a lot of the noises and even the body language for play and fighting can seem similar at first.

Even when two dogs who know each other well are playing, it can look or sound like they’re tearing each other apart, wrestling with bared teeth and ears back, taking turns chasing one another, rolling on the ground, and often accompanied by loud, open-mouthed growling. And not only can it be hard to tell the difference between play and aggression, sometimes what starts out as simple roughhousing play and can move into real fighting.

You don’t need to be a trained canine behaviorist to know the difference, but you do need to pay attention. 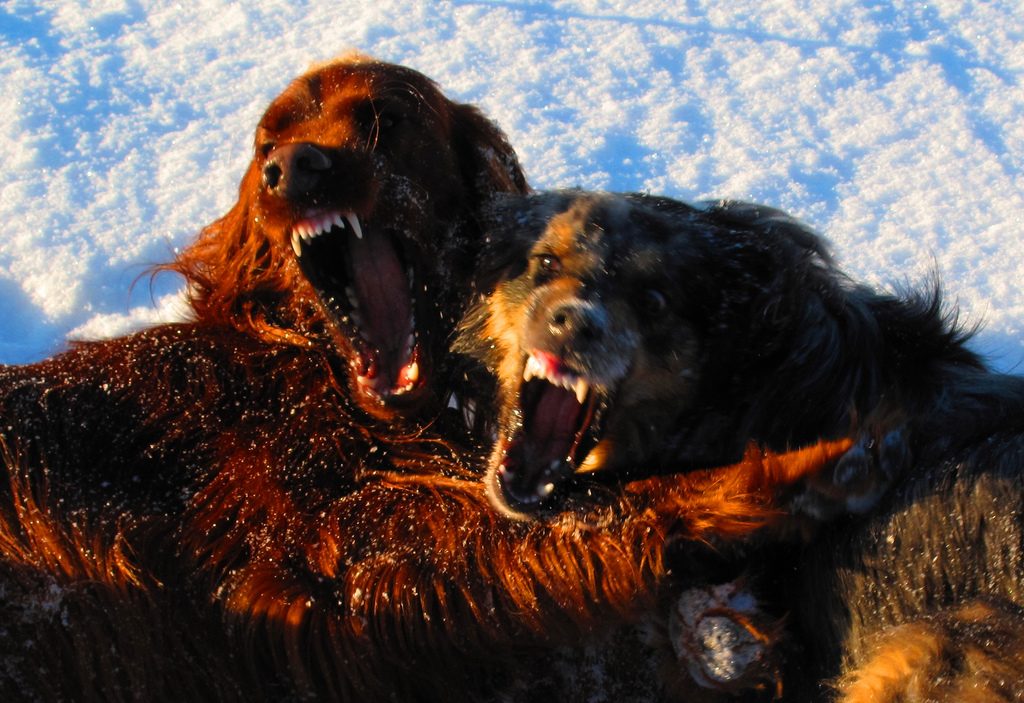 One of the first things people notice regarding body signals in a dog is the tail wag. Is it wagging happily (fast and bendy/soft and including soft, whole body wags) or is it held up high, very stiff and not moving (warning), or held high wagging stiffly (nervous and/or aggressive)?

In my breed, Rottweilers, the tails are normally docked very short, and you have little indication of mood simply by looking at a tail, so you learn to look for other signals. These include things like hackles raised (fur over shoulder and/or down spine to tail bristled/sticking up), arched neck, ears pinned back, up on toes, and an overall body stiffness.

In dogs that are playing, the vocalizations are steady and varied. If you notice the intensity of growling increasing, including the “roar” kind of growl and body stiffness, this is a dog that’s no longer playing. For the biting/teeth sparring kind of play, you’ll notice that the dogs’ heads are moving side to side, turning their faces away from one another, bodies loose and “soft,” and mouths gaping open. A dog that is no longer playing will go straight in to bite with directness. I’ve mentioned stiffness more than once, and it’s not just a dog standing still, but an overall rigid block of body posture as opposed to a loose, relaxed posture. 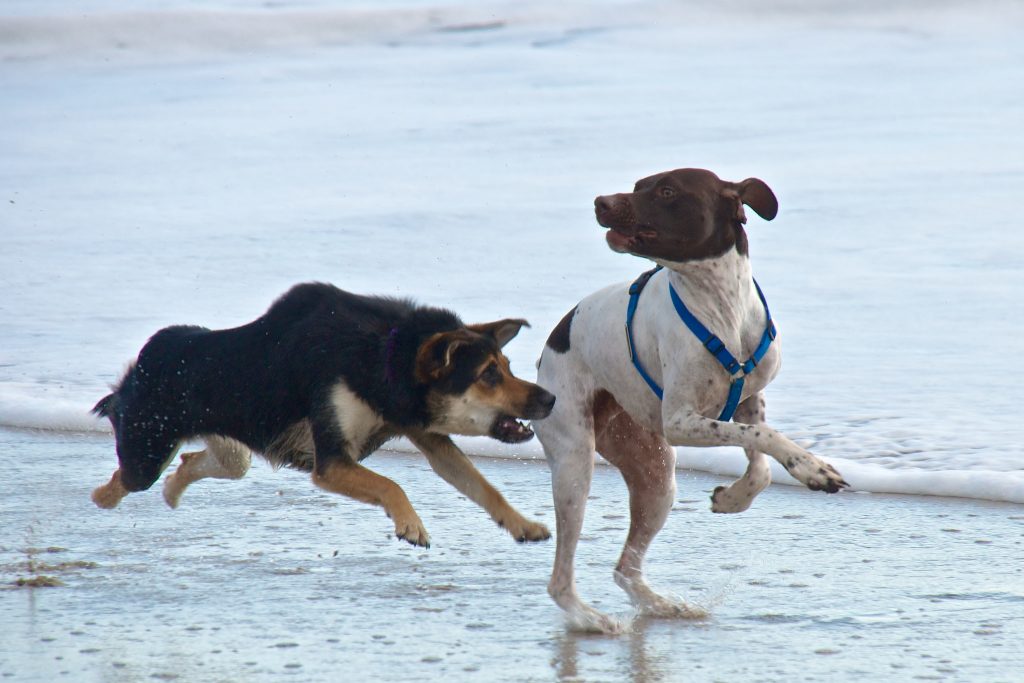 Occasionally a dog (especially young dogs, or poorly socialized dogs who haven’t been around other dogs much) will be pushy – launching right in, jumping on and play biting another dog without any of the preliminary dance of play bows and loose body language, bouncy/prancing or “rocking horse” gait to invite and entice the other dog to play.

These poorly socialized dogs can be oblivious to signals that the other dog is not appreciating these behaviors. They don’t know any better and don’t heed what the other dog is trying to tell them (No!), when the other dog has no interest in continuing any interaction with the hooligan.  Allowing this “playful” behavior to continue is tempting fate – one or both owners should intervene by calling their dog, redirecting behavior or otherwise breaking the interaction and potential escalation.

Keep in mind, too, that different breeds play differently, often depending on what they were bred for. A lot of the herding breeds love to chase and nip at legs of the dog they’re chasing, or nip at the legs when they are wrestling.

A friend who’s had Scottish terriers for many years tells me Scotties play well with other Scotties, but can become too rough when playing with other breeds with different play styles. My Rottweilers like to use their whole body, bumping with chest or hip in play. Most dogs adjust to each other’s’ playing styles easily, but for sensitive dogs, or dogs that aren’t used to playing with other dogs (or breeds), it’s best to keep a close eye on them and intervene when one dog seems to be uncomfortable (tucked tail, body crouched or rounded, trying to get away or air snapping at the other dog). 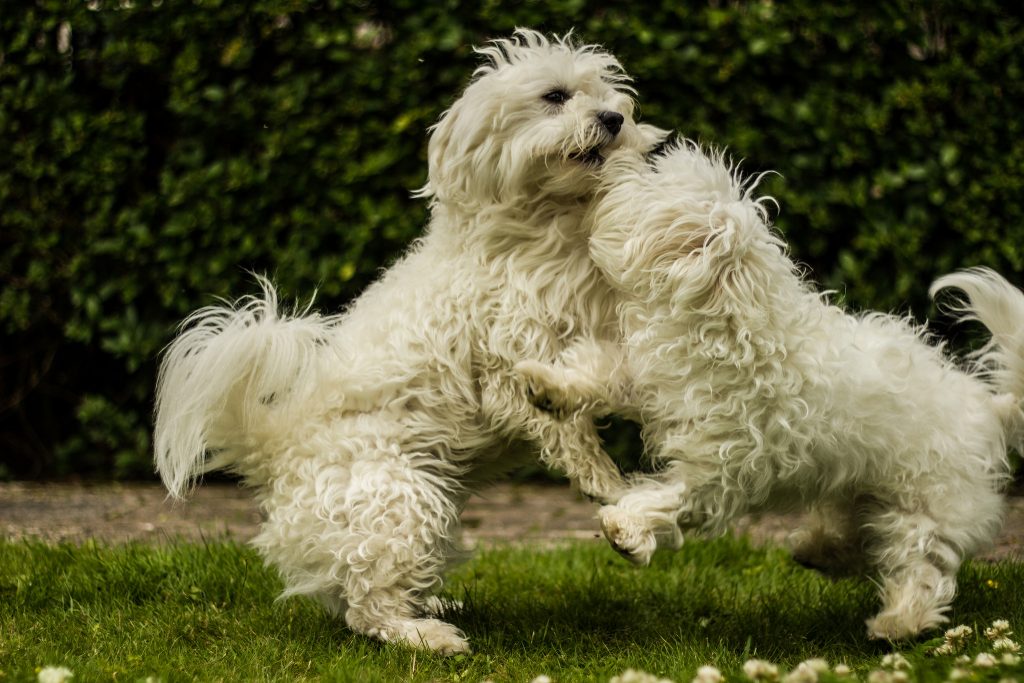 Before you let your dog loose at the dog park, consider age appropriate playmates. Jill Kessler Miller, a certified dog trainer and dog bite behavior expert in California, stresses making sure your dog actually wants to play. A 6-month-old puppy is a play machine, whereas a mature 4- or 5-year-old often outgrows the desire to play at that level or intensity.

She also emphasizes the need to stay nearby your dog, so you can monitor play behavior and make sure your dog isn’t being bullied (or isn’t being a bully!). For instance, if one dog is pinned and can’t get away, break it up.

With well-balanced play, you’ll notice role swapping: first one dog is chasing the other, then they reverse. In truth, when you watch the whole play ritual (all based on the root canine prey behaviors of stalk/chase/pounce/bite), it’s much like a dance – from the play bow, to the bouncy gait, to the chasing back and forth, open-mouthed teeth sparring, and rolling around on the ground.

Miller believes it’s good for dogs to play with one another, and also that you as the owner must be mindful of the environment and your dog’s individual needs and interests. A canine best friend or small neighborhood play group with like-minded owners is a delightful way for your dog to socialize and burn up some of that doggie energy. 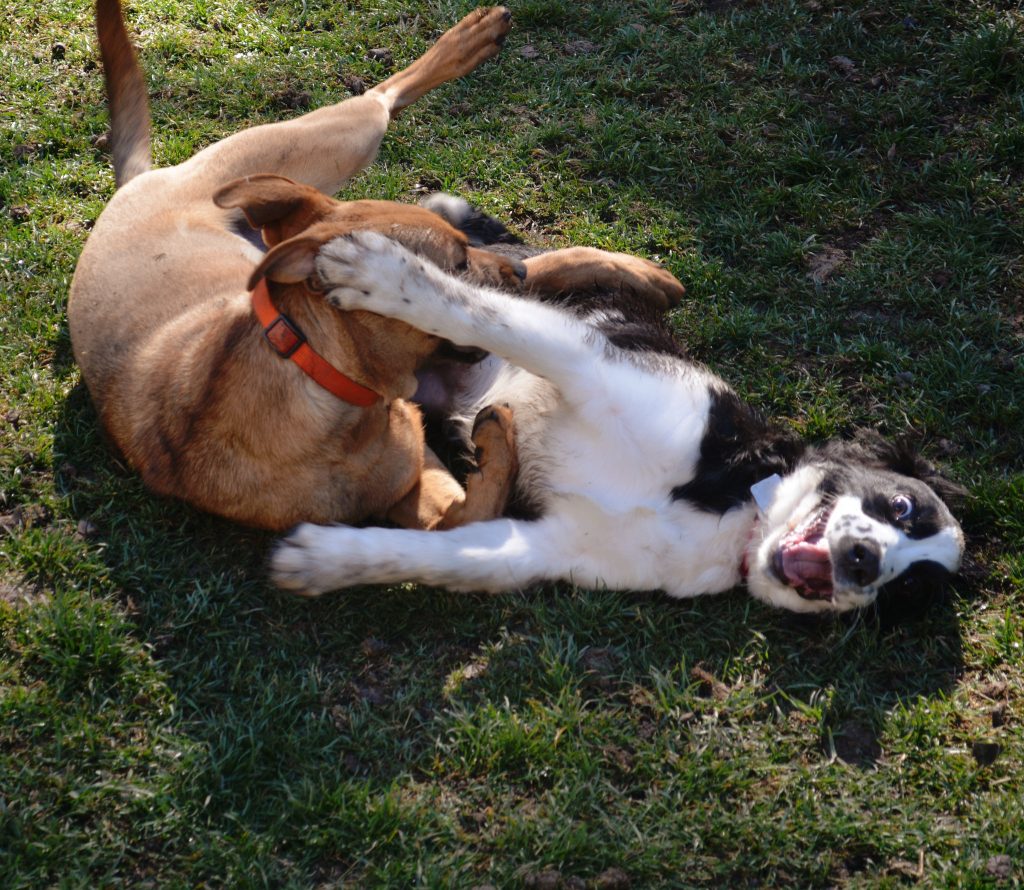 There are usually many signals present, and although most dogs read them very well, we humans are usually lifetime students. There are plenty of online resources available to learn and better understand canine body language.

An exceptional book that I refer to regularly is Canine Behavior, A Photo Illustrated Handbook, by Barbara Handelman, M,ED, CDBC. This book is loaded with photos and covers all aspects of canine behavior (pages 165, and 181—200 specifically discuss and illustrate play styles and behavior), with terminology explained along the way, and is an excellent addition to any dog lover’s bookshelf.