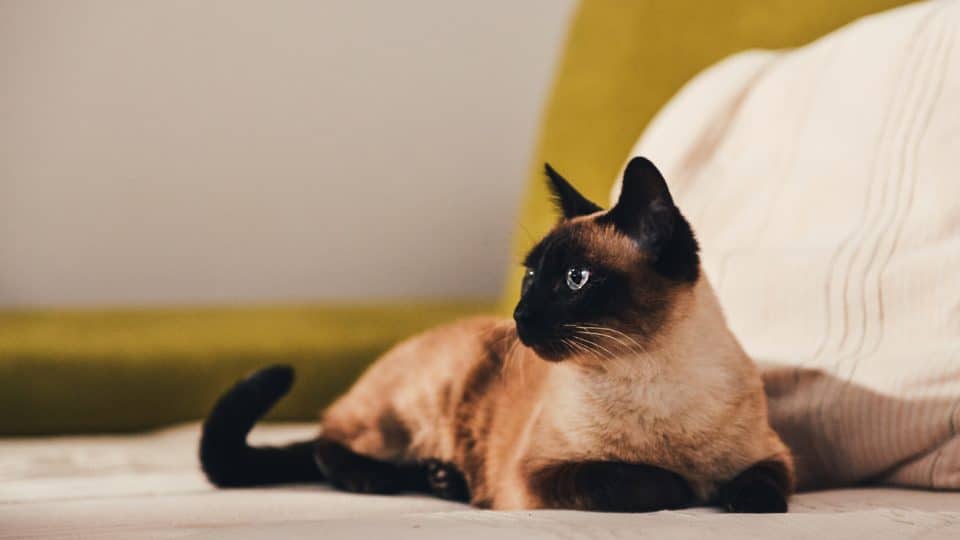 There are several reasons that might help explain why your cat is staring at the wall — from spotting something we haven’t, to being in hunting mode, to simply being a bit, well, mysterious. But, on some occasions, staring at the wall for long periods can also be a sign something serious is going on.

We typically rely on our cat’s behavior and actions to understand what they’re thinking. And while some cat behavioral quirks and habits are easier to decipher, others are a mystery that even the Scooby gang might struggle to unravel! And if your cat has the odd habit of staring at the wall, this might be one of those quirky cat behaviors that seems to defy reason!

Let’s dive into the reasons behind your cat’s apparent fascination with your walls; the chances are your kitty isn’t just watching paint dry, so let’s take a closer peek at what they’re up to.

Why Do Cats Stare At Walls?

As noted, there are various reasons why your feline might have a penchant for gazing longingly at a wall. Here are some of the less-concerning explanations for wall gazing; we’ll explore the more serious reasons in a moment.

Your Cat Hears Something

While you might think your hearing is pretty good, your cat’s ability to pick up sounds well exceeds human capabilities.

Cats can hear up to 64,000Hz, whereas a human’s range extends to around 23,000Hz — meaning felines are around three times better at picking up sounds than we are. One reason is that they have a much deeper and accentuated ear canal shape, so sounds are carried more efficiently to the eardrum.

So, your kitty might be staring at the wall because they’re picking up noise from behind it that we can’t gauge: Perhaps a tweaking pipe or a mouse is scuppering around behind the plaster.

Or, because of a cat’s increased range of hearing, they might “be listening intently for something, which can appear like they are staring at the wall,” notes Dr Amber Karwacki, partner doctor at Heart + Paw Callowhill. 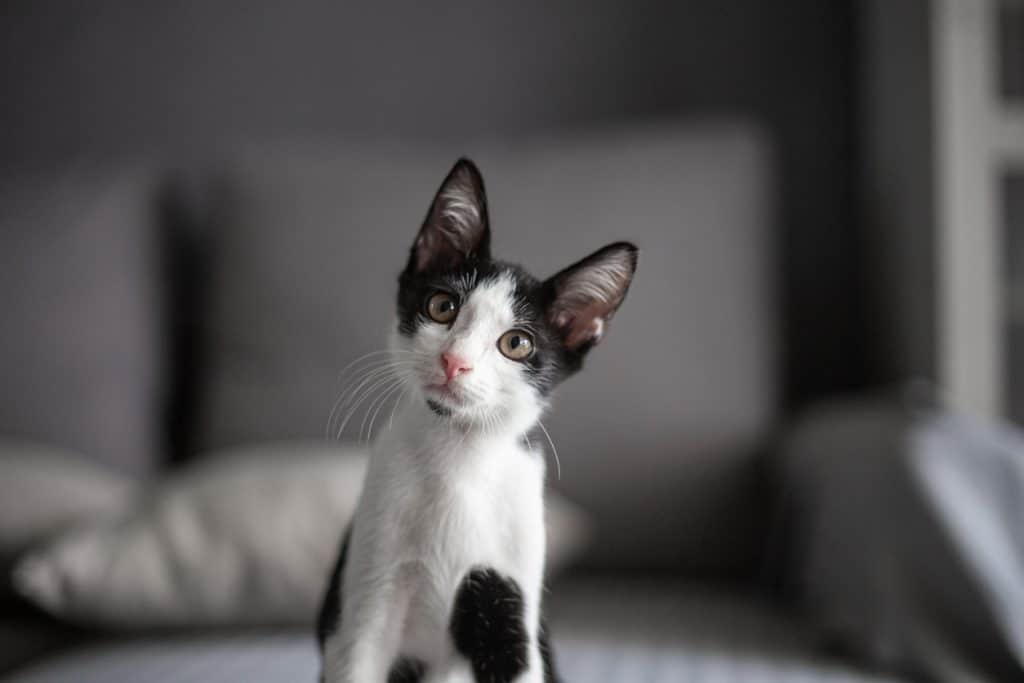 Your Cat Has Better Eyesight

Some aspects of feline vision aren’t as optimal as in humans. For example, according to Cats Protection, it’s trickier for them to focus on objects closer by, and they aren’t able to see as many colors.

However, in other aspects of sight, it’s like your feline has inbuilt super goggles. Cats Protection reveals they have a wider field of vision, at 200 degrees compared to 180 degrees in humans. The ‘cone’ cells in their eyes also mean they’re able to see things in much clearer detail, and a higher number of ‘rod’ cells means their vision in low light is up to six times better than ours.

Such fine eyesight allows them to spot things your eyes cannot (especially if you’ve forgotten your glasses).

“Since cats have a heightened sense of sight, they will see small insects or specks of light on the walls that we won’t pick up on,” explains Karwacki.

It might even be that your kitty is looking at ‘secret’ beams of sunshine: Studies show cats’ eyes can pick up UV light, which humans cannot perceive.

Your Cat Is Hunting

Not all hunting activities occur in the garden or further afield — they can happen in the comfort of your own home.

Felines, both domesticated and wild, often watch their prey before pouncing; they want to ensure the timing is right for success.

As Karwacki reveals: “They may be tracking/hunting prey that is by the wall you might not be able to see.” Perhaps a spider is making its way across the wall back to a cobweb, and your cat is just assessing the best moment to strike.

Your Cat Is Being Mysterious

Another reason your kitty might be staring at the wall is, actually, for no real reason at all.

Humans can gaze off into space, so your cat might be doing the same. We never know what’s going through their brains, so it could be they’re distracted by other goings on or simply acting a lil’ bit odd.

Maintaining a sense of mystery can keep relationships interesting, and this is no different in the one between you and your furry friend! 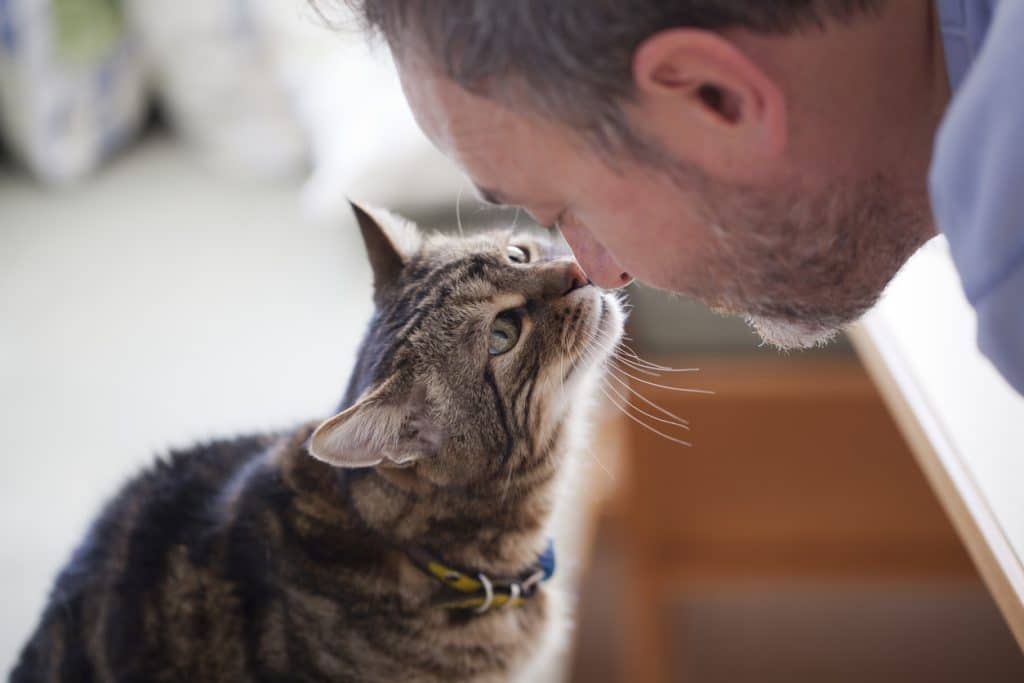 When Should I Worry About My Cat Staring At The Wall?

In general, a cat engaging in long gazes at the wall is nothing to worry about. However, occasionally, it can indicate a medical condition that requires attention.

Staring at the wall can be a symptom of three concerns: Feline cognitive dysfunction, feline hyperesthesia syndrome, and head pressing.

Just as our mental abilities start to decline as we enter old age, the same applies to cats. “Feline cognitive decline causes changes in the brain which leads to behavioral changes,” shares Karwacki. According to Cornell University College of Veterinary Medicine, felines can begin showing signs of cognitive decline after age 10.

Cornell University states that symptoms of feline cognitive include:

“These [behavior] changes can lead to staring at walls,” Karwacki adds.

Experts at Cornell University also note that feline cognitive dysfunction can be linked to neurological disorders. In this instance, a cat’s risk of physical injury can also be increased as the area of the brain that controls responses to the environment is diminished. 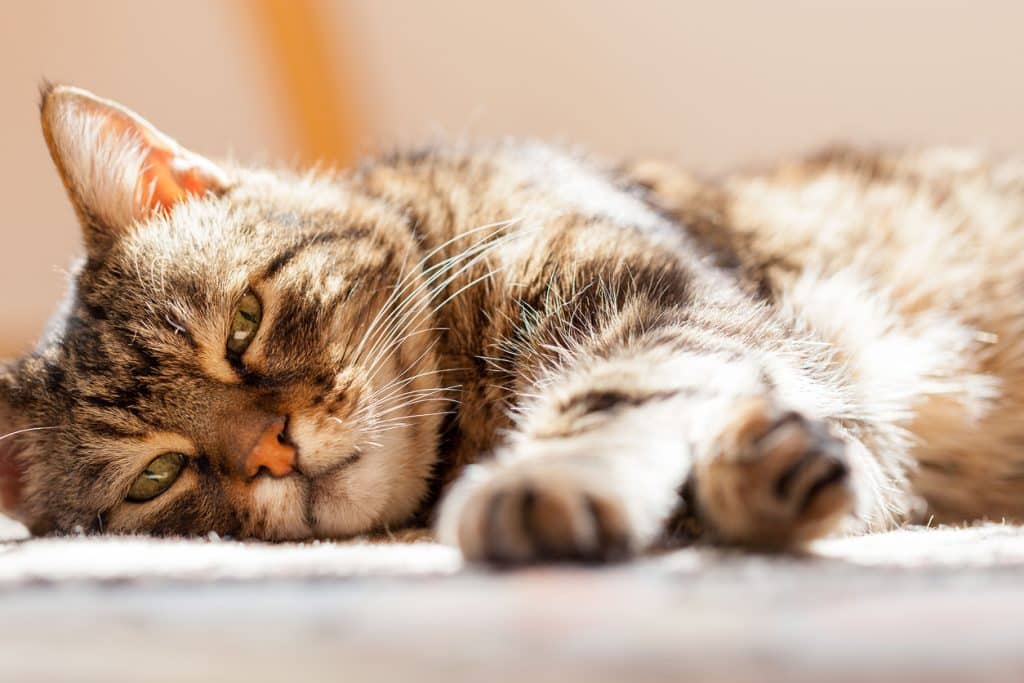 According to Cornell University, this condition mainly presents as skin hypersensitivity, usually on the back and around the top of the tail.

However, it can also be accompanied by other symptoms, such as:

Whereas a cause can be pinpointed for many cat health concerns, vets aren’t so sure what’s behind hyperesthesia syndrome.

Some think it’s a neurological or genetic concern. Others, meanwhile, believe it’s related to anxiety — and the good news is there are steps you can take to help relieve this.

Either way, says Karwacki, “if your cat is showing these symptoms, you should have them examined by your veterinarian.”

The main sign of this concern is when a cat “presses their head against a wall and does not move for a period of time,” explains Karwacki.

Other actions or symptoms that may accompany head pressing include disorientation, seizures, vision problems, pacing, and heightened vocalization.

Head pressing isn’t common in cats, she adds. However, when it does occur, it can signal a serious medical condition, such as a brain tumor, infectious disease, metabolic disorder, or poisoning. This means it’s critical to contact your vet right away.

It’s not to be mistaken for head butting, though — which “is when cats rub their head against the wall or your body as they are walking by or asking for scratches,” explains Karwacki. This is a totally normal (and sometimes affectionate) behavior for cats to engage in.

Like humans — and other animals — cats can exhibit all kinds of funny and strange behaviors. But that’s just one of the many reasons why we love them, right?

Felines can be caught staring at the wall for numerous reasons, most of which are harmless (and often demonstrate their superior vision and hearing!).

Occasionally, however, long periods spent gazing at the wall can indicate something more serious is going on with your kitty — especially if accompanied by other symptoms. If you notice any out-of-the-ordinary or worrying behaviors, don’t hesitate to ask your vet for advice.