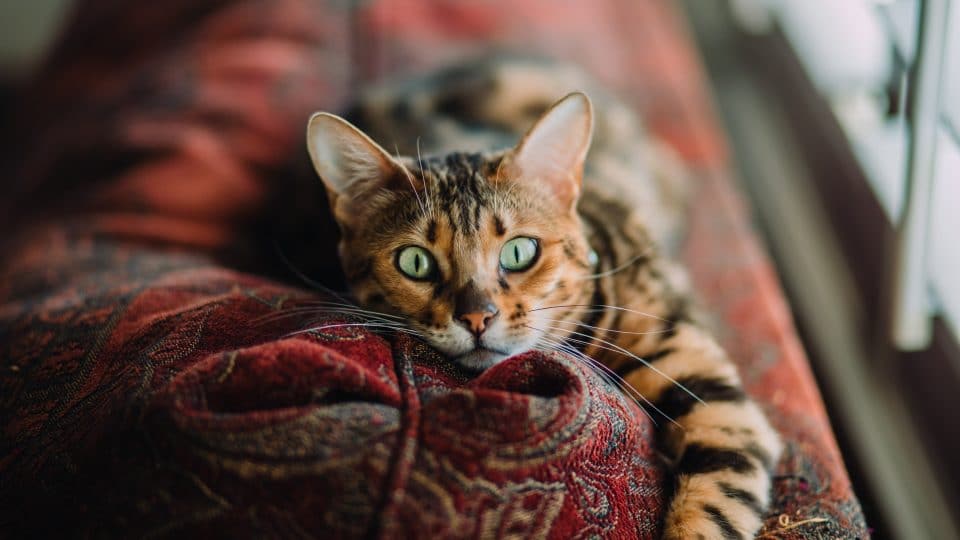 As a cat lover through and through, I’ve spent my share of time pondering the mysterious quirks of the feline species. Why, for instance, does my otherwise doting kitty think it’s a good idea to dump a full glass of water over my sleeping head at 3 AM? The world may never know. I certainly don’t.

Cats are baffling creatures. I’ve lived with them my entire life, but I still don’t have them figured out. And that’s OK! We love our cats for their oddities and eccentricities. Somehow, their mysterious behaviors make them even more endearing.

If you’ve ever lived with a cat, I’m betting you’ve witnessed more than one of these downright bizarre feline habits. Let’s take a look at 11 truly strange cat behaviors.

Like I said, in our household, this manifests as a 3 AM shower. My cat loves to knock over glasses filled with water. Bonus points if they’re on my bedside table. I’d go so far as to say it’s one of his top activities (to be fair, I probably look hilarious when I wake up in a confused and drenched rage.)

Maybe your cat likes to push your keys behind an end table to spice things up. Maybe he likes to delicately tip flower vases off the kitchen table just to see what happens.

Why do cats do this? Experts point to a few possible explanations for this famously feline behavior. According to PetMD, it’s likely that your cat is trying to get your attention. Which makes sense because, well, it works! Well played, my friend, well played. 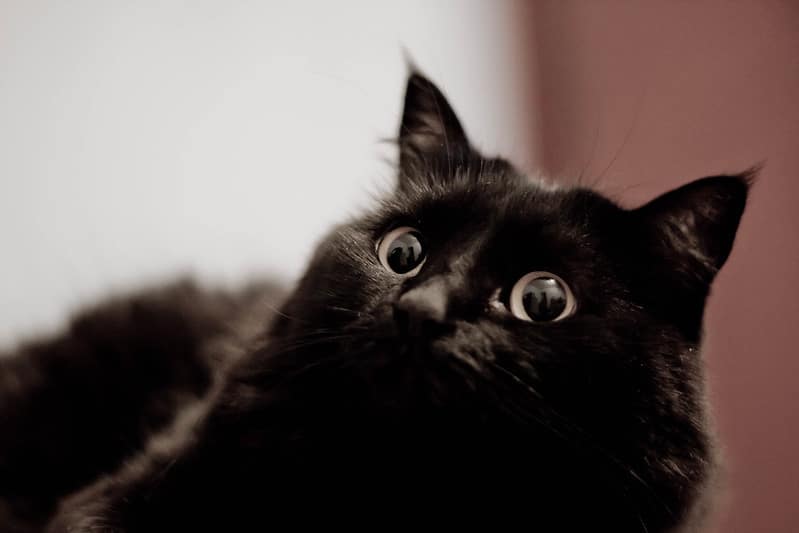 Does your cat insist on sleeping with his backside facing you? Some cat owners are miffed by this behavior. But your cat isn’t being rude. He’s showing trust.

Cats are always alert, even when they’re resting. So if he rests with his back towards you, it means that he doesn’t see you as a threat. He may even be scanning the area to protect you. Now that’s what I call love.

3. Getting a case of the late-night zoomies 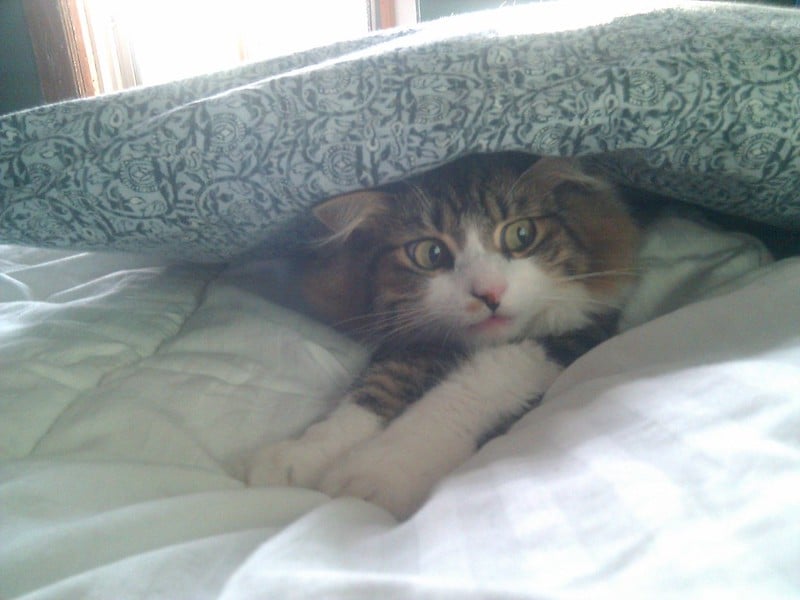 For those of you unacquainted with “the zoomies,” allow me to explain. It’s late in the evening, the entire household is in bed, and your cat gets a sudden burst of energy. Without warning, he zips frantically from room to room, batting at things, jumping on furniture, yowling like a crazed maniac. You know, normal cat stuff.

Some folks call it “the nighttime crazies.” No matter what you call it, it’s equal parts maddening and entertaining.

Why does it happen? There are a few possible reasons. Your kitty might be releasing pent-up energy, or he could be responding to the scent of an unwelcome critter in the yard. Either way, it’s a riot.

4. Only drinking water from a running faucet 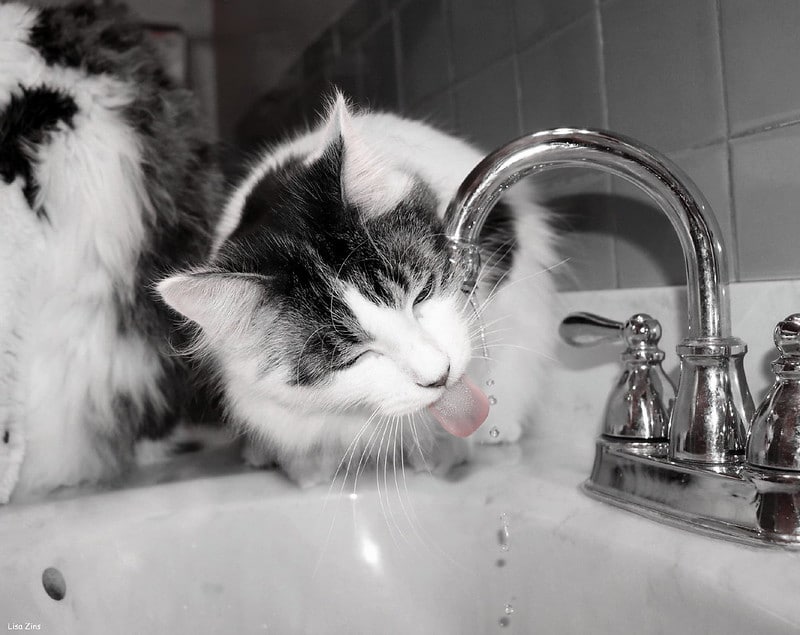 My cat takes this odd preference to another level. Whenever someone enters our bathroom, he bolts like a madman to perch on the bathtub ledge and begs for the water to be turned on. I freshen his water bowl constantly but to no avail. He’d much rather hydrate by slurping from a running stream of water. (He also enjoys joining me in the shower, so yes. He’s an oddball.)

If your cat likes to drink from a running faucet, you can probably chalk it up to feline instinct. In the wild, feral cats will avoid standing water because it carries a higher risk of being contaminated. Plus, hello: running water is colder, crisper, and as fresh as it gets. Makes sense to me.

5. Randomly biting you when you’re petting them 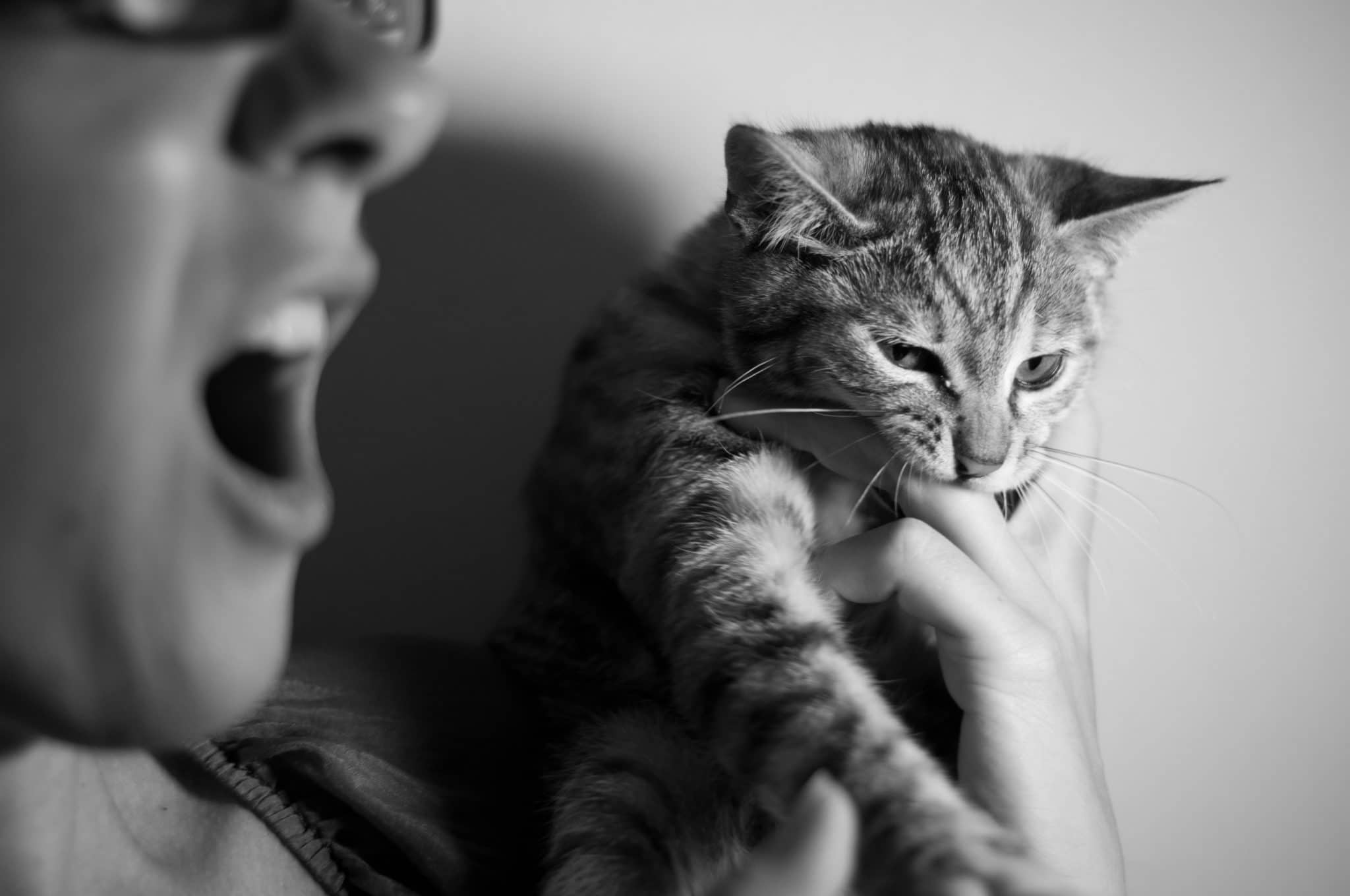 I used to have a cat who was notorious for giving out what my family called “love bites.” Without fail, midway through a cuddle session (which, mind you, she appeared to be enjoying), she’d interrupt with a lightning-fast CHOMP on one of my poor, unsuspecting fingers. What gives?!

While theories abound, there’s no definitive answer as to why cats do this. You can learn to detect subtle signs that a cat is about to take a nip. But mostly, it’s just something us cat lovers learn to live with.

6. Sleeping on your head

When it’s time for your cat to pick a cozy spot to spend the night, the obvious choice is your head. Why would he sleep anywhere else?

As strange as it seems to us humans, there are a few reasons why cats like to snooze on their owner’s head. For one thing, your head is warm. It probably smells good. And for all you fidgety sleepers out there—your head is the most stationary part of your body at night. So actually, your cat might be onto something here.

7. Bringing you their latest kill

This is a fun one. It’s not enough for your cat to simply exterminate any vermin he finds skittering about your house. He’s proud of his hunting prowess, and he wants to spoil you with a sample of his latest kill. So he may leave a precious “gift” at the foot of your bed, fully expecting you to be overjoyed by his display of generosity. 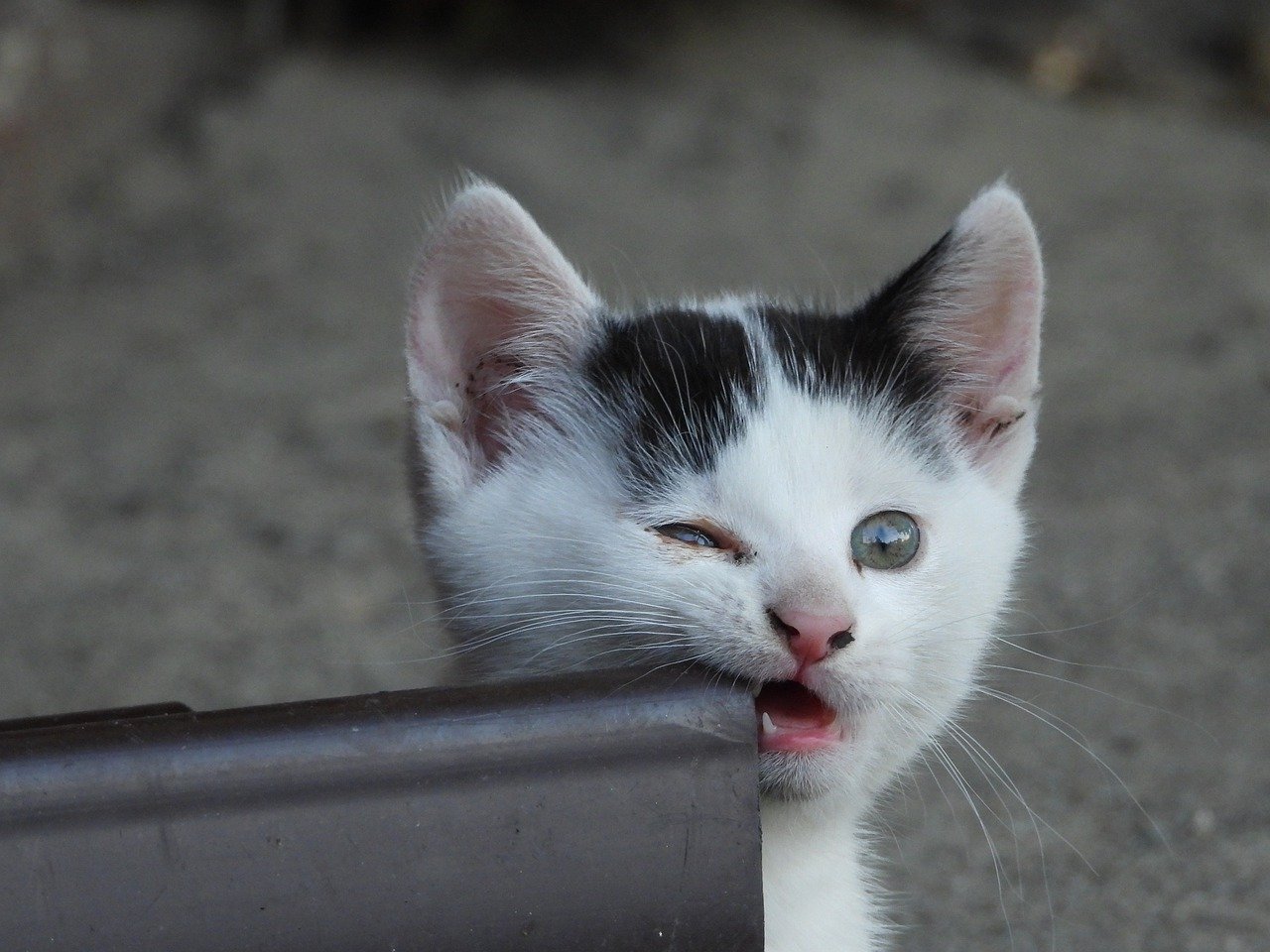 This can manifest in a number of ways. Personally, my cat prefers artificial Christmas tree needles. Plastic bags are a perennial feline favorite. Leather furniture is another crowd-pleaser. Whatever tickles your cat’s palate, you’ll frequently find him munching away at it.

For the most part, you needn’t worry about this peculiar behavior. Unless, of course, your kitty enjoys the taste of wires. If that’s the case, you should cover any cords with protective tubing to reduce her risk of electric shock. 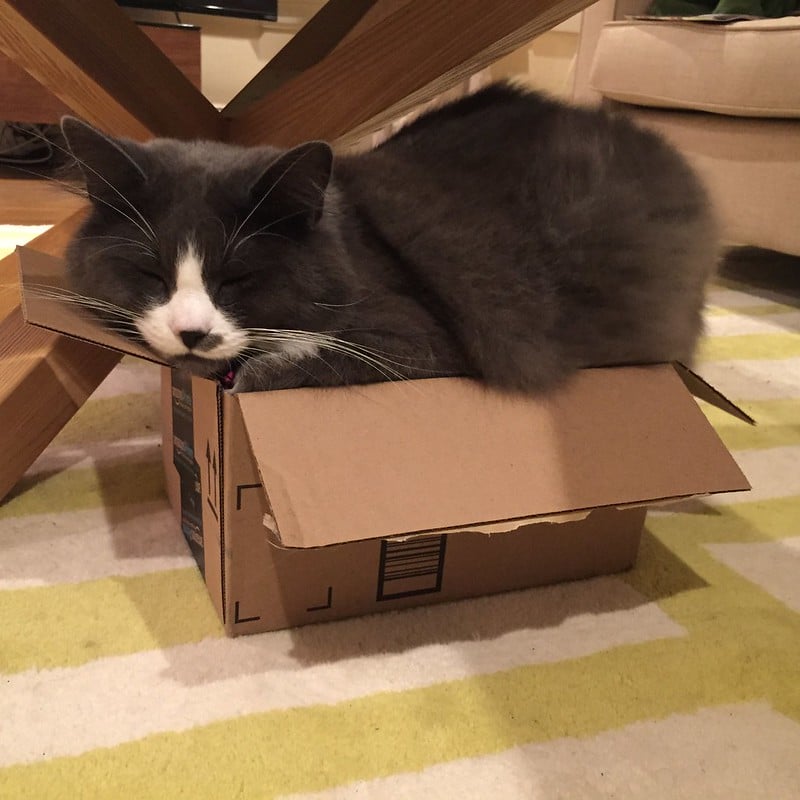 Your cat could have full-time access to the world’s most comfortable bed, but given the choice, he’d much rather scrunch himself into the itty-bitty confines of a shoebox. The smaller the better!

Why do cats do this? We can’t say for certain, but the most likely explanation boils down to one word: safety. According to Vetstreet, small containers make good hiding places, and they give your cat a sense of security. Whatever the reason, it’s a habit that makes us smile every time. 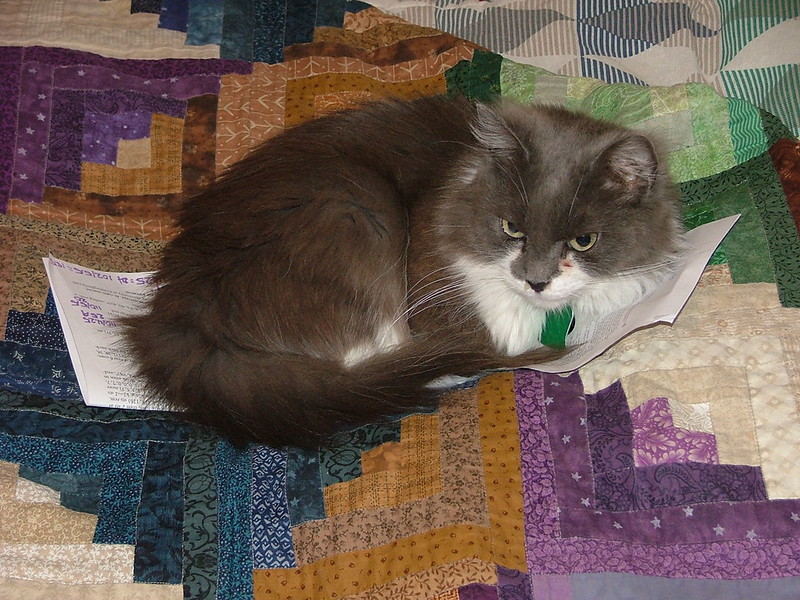 When you first welcomed your kitty into your home, you probably bought him a cozy cat bed. But no matter how temptingly soft that bed may be, your cat would rather curl up on a decidedly uncomfortable pile of magazines. Or your computer keyboard. Or a bunch of leftover bubble wrap, even.

Cats love to sleep on whatever object has captured their human’s attention. No matter how stiff, hard, or generally unwelcoming the surface, your cat is right there. Every time. It’s as if he wishes to say, “Oh hi. Were you reading this? How about you pay attention to me, instead. I’m much more interesting, anyway.” And you know what? He wouldn’t be wrong. 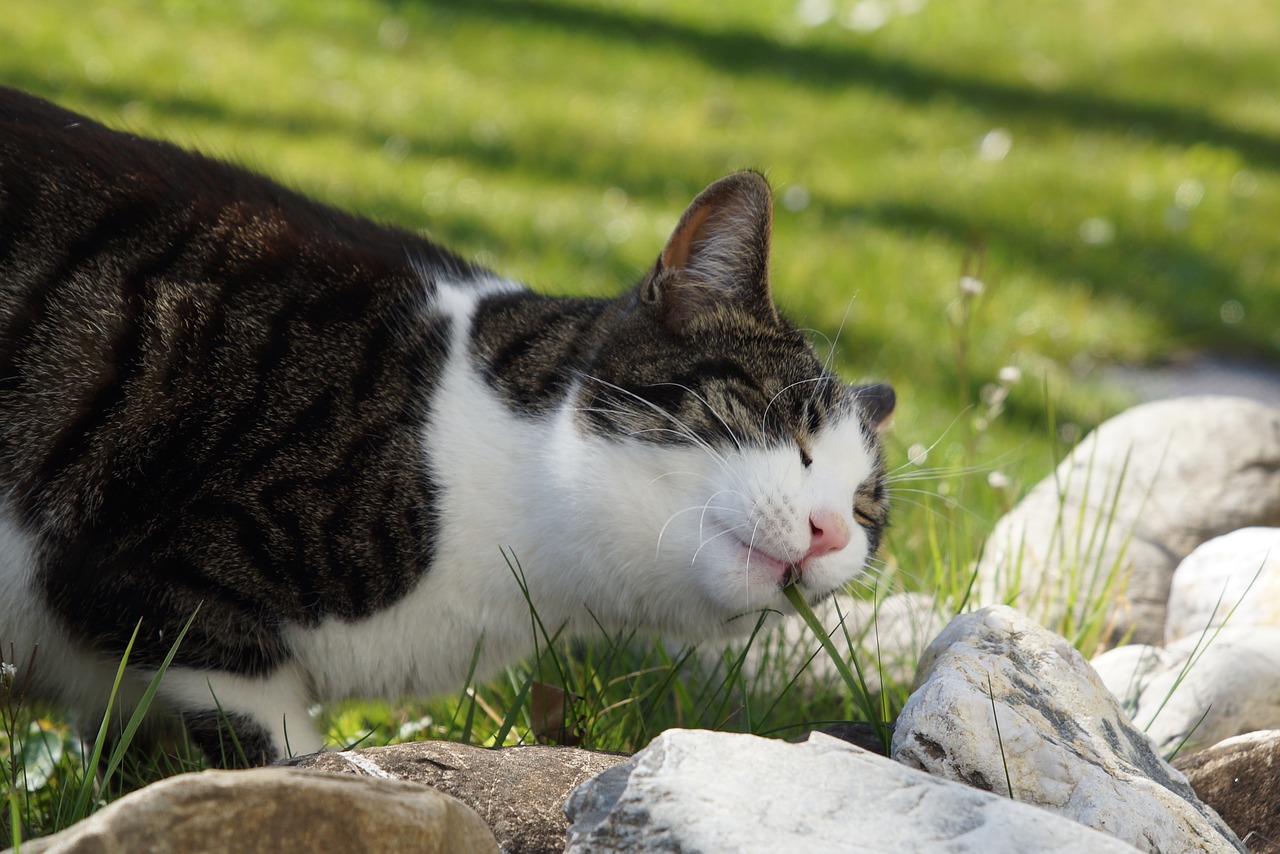 Carnivorous though they may be, cats still fancy a bite of greens now and then. Grass, specifically. So why do our cats occasionally like to nibble on the lawn? According to PetMD, eating grass is an effective way to clear out a cat’s digestive system. Think of it like popping an antacid or a laxative.

If your cat’s crazy antics have ever left you scratching your head in bewilderment, you’re in good company. Most of us can name at least one strange cat behavior that we find puzzling. But then—isn’t that half of their appeal?