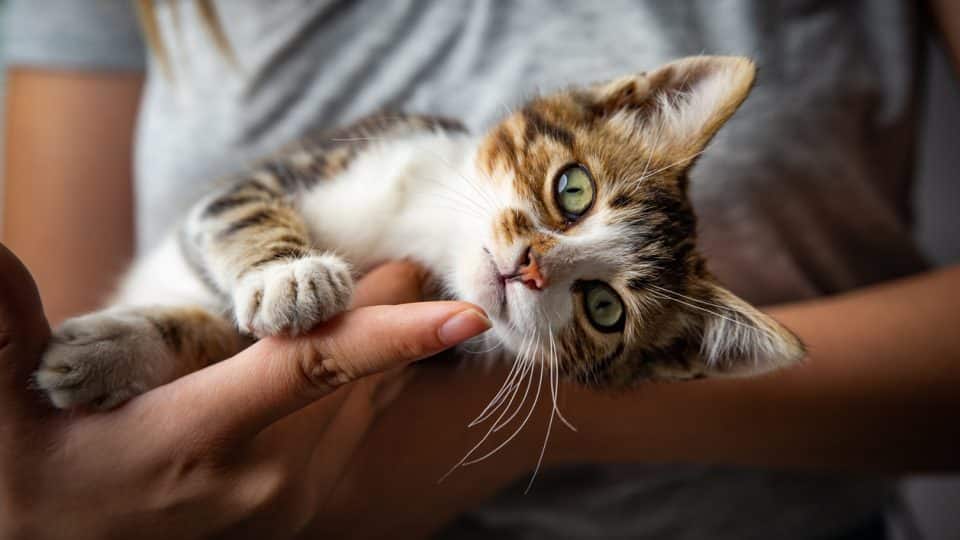 From your cat’s cute little toe beans to the folds of their adorable ears — there are a lot of smarts packed into that compact little body. But just how clever are cats? While many animal cognition experts have spent time researching dogs, we don’t know quite so much about the minds of our feline friends. Maybe that’s because cats are less interested in helping us with our science experiments, and more interested in taking a nap?

The good news though, is that with each scientific study, our understanding of feline cognition is becoming more advanced. From working out just how cats communicate with us, to whether they dream and how long their memories might be, every piece of information helps us figure out our furry friends a little bit better. We’ve rounded up what we know so far about our cat’s brains. 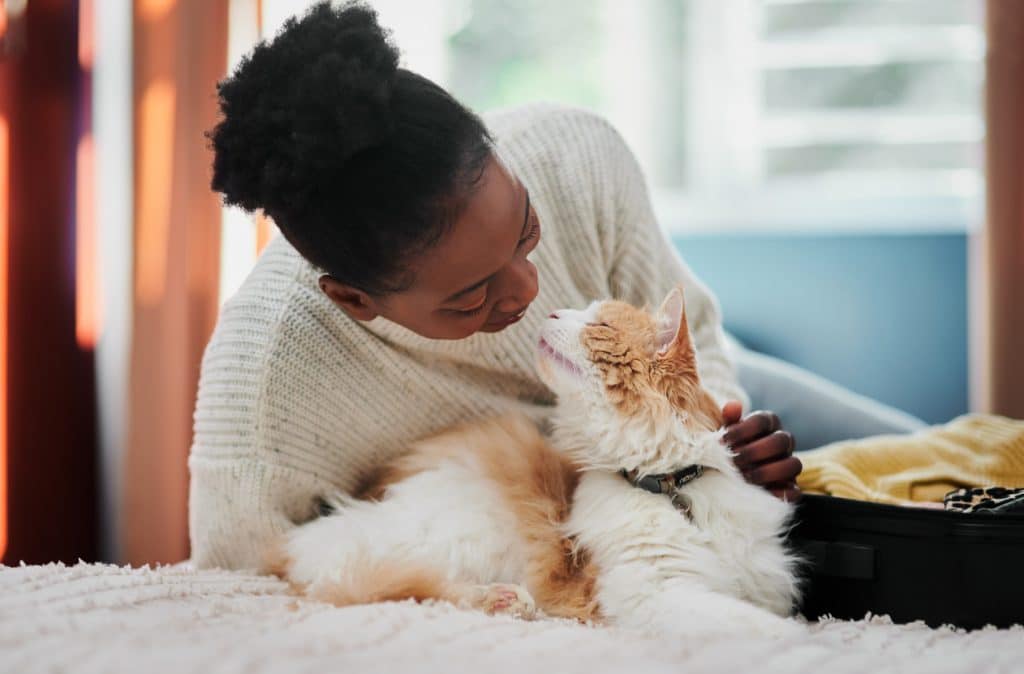 Cat Brains Are Much Smaller Than Humans

They might have a smaller brain than ours, but exactly how big is a cat brain? “The brain of a domesticated cat is roughly two inches long and weighs between 25-30 grams,” Dr. Bruce Kornreich, Director of the Cornell Feline Health Center, told Rover. This equates to around the size of a human pinky finger, or 0.91% of their body mass. In comparison, the human brain makes up about 2.3% of our body mass.

Domestication also seems to have made their brains smaller, a phenomenon that’s been well documented in many species of domestic mammals. Research found that African wildcats (Felis lybica), the domestic cat’s ancestor, have a larger cranial volume.

Cats Have A Better Short-Term Memory Than Dogs

Cats can store three main types of memories: spatial (where things are), plus short and long-term memories. Spatial memories help your cat remember things like where their litter box is kept, to their favorite sunny spot for a nap, or even where you hid their treats! Short-term, or working memory, helps cats solve problems. “But these short-term memories only last for around 24 hours,” said Dr. Kornreich.

“Cats also have excellent long-term memory, probably spanning years,” said Dr. Kornreich. These likely relate to particularly positive or negative experiences. As to whether cats or dogs have better memories, it’s hard to know for sure. Dogs often outperform cats when it comes to short-term memories, but it doesn’t necessarily hold to reason that this means they have better long-term memories, too. 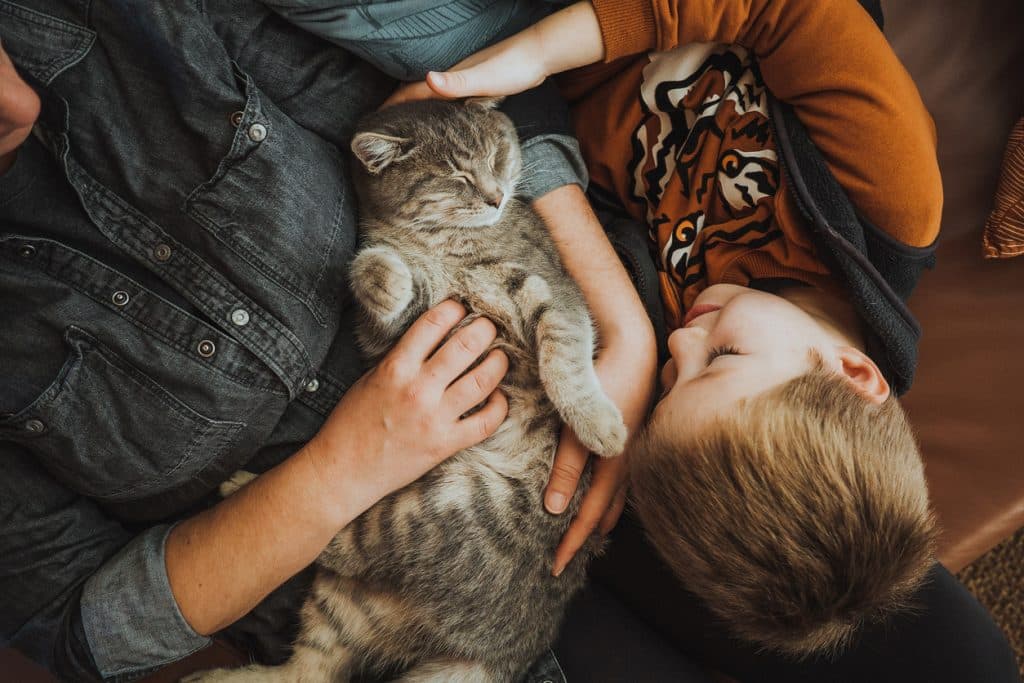 Cats Have A Similar Brain Anatomy To Ours

While the overall anatomy of a cat’s brain is similar to ours, the orientation is a little different. Like humans, cats also have a cerebral cortex (which controls cognition, emotions, motor function, memory, planning, and more) cerebellum (responsible for regulating movement and controlling balance), and brainstem (which regulates essential functions including heart rate and temperature). While our brains are oriented from the top down, cats’ brains are oriented from front to back.

Cats Have Around 250 Million Brain Cells

Now we’ve considered anatomy, what about brain cells? Cats’ brains include two basic types of cells — neurons (nerve cells) and glia. Neurons are responsible for sending messages throughout the body while glial cells protect the neurons and their surrounding environment. Cats have around 250 million brain cells — similar to brown bears.

Even though cats may have fewer brain cells, that doesn’t mean they’re not smart. “Despite having fewer brain cells, cats likely have more acute abilities than humans in terms of spatio-temporal recognition, balance, and the innate abilities that make them predators,” said Dr. Kornreich. “It’s important to remember the cat’s brain is perfectly evolved for their unique ecological niche — they’re truly exquisite little hunters whose central nervous system is finely tuned to their environment.” 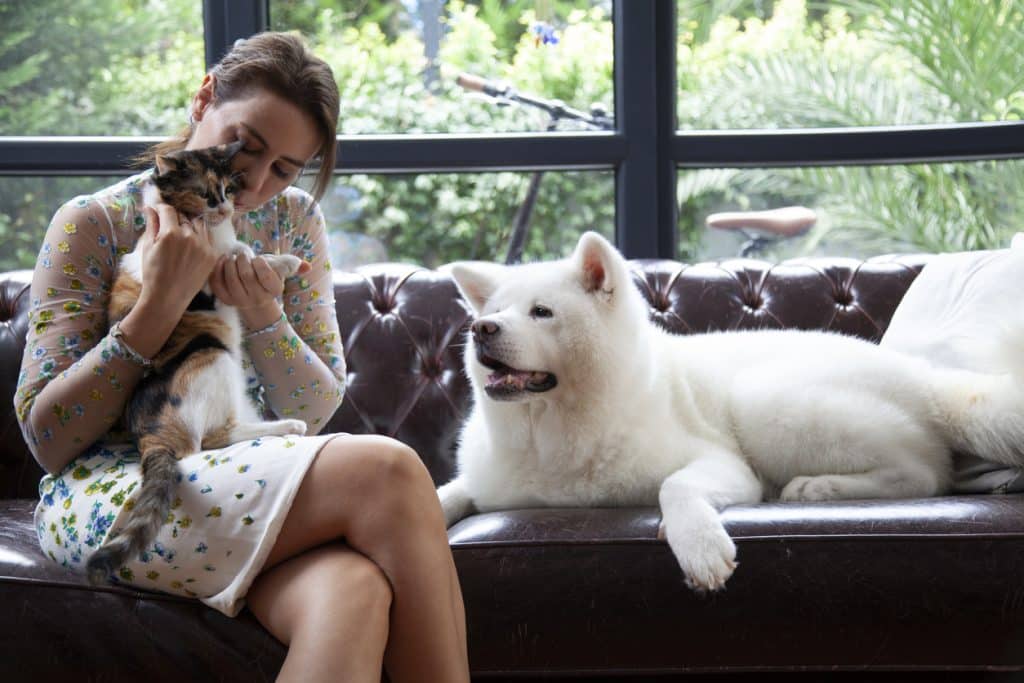 Any pet parent will tell you their cat can recognize their name… whether they choose to respond to it is another matter entirely! But cats also recognize their pet parent’s voices. They do this by using vocal cues to tell the difference between human voices. You might not even notice your cat’s ability to do this, because rather than responding with obvious communicative behavior (like tail movements or vocalization), cats use subtle orienting behavior (including head and ear movements) as they’re distinguishing whether they recognize the voice of the person calling them or not.

While we can’t ask our cats, science suggests that they dream just like we do. Their sleep cycle includes periods of rapid-eye-movement (REM) sleep, the stage of the sleep cycle when our dreams tend to occur most often. During REM sleep, you might see your cat’s eyes moving under their lids, their legs twitching, or even that they chirp and chatter!

During the day your cat probably takes a lot of short cat naps, but periods of deep sleep where they’re more likely to dream will usually occur at night, typically after your cat has been active during dusk (the perfect time for a short play session with some toys).

Cats Can Get Brain Freeze

You’ve probably seen videos of cats getting brain freeze when they lick or eat something cold — and if you’ve experienced this phenomenon yourself you’ll know it’s not exactly pleasant. “The scientific term for brain freeze is ‘sphenopalatine ganglioneuralgia’ which refers to the dilation of blood vessels in the mouth or throat,” said Dr. Kornreich.

This sensation is perceived as pain, which is why your cat might make a face when eating something cold. “It’s probably best to avoid feeding cold treats to your cat, but if you do, let them set the pace and decide if they want to eat it or not,” added Dr. Kornreich. 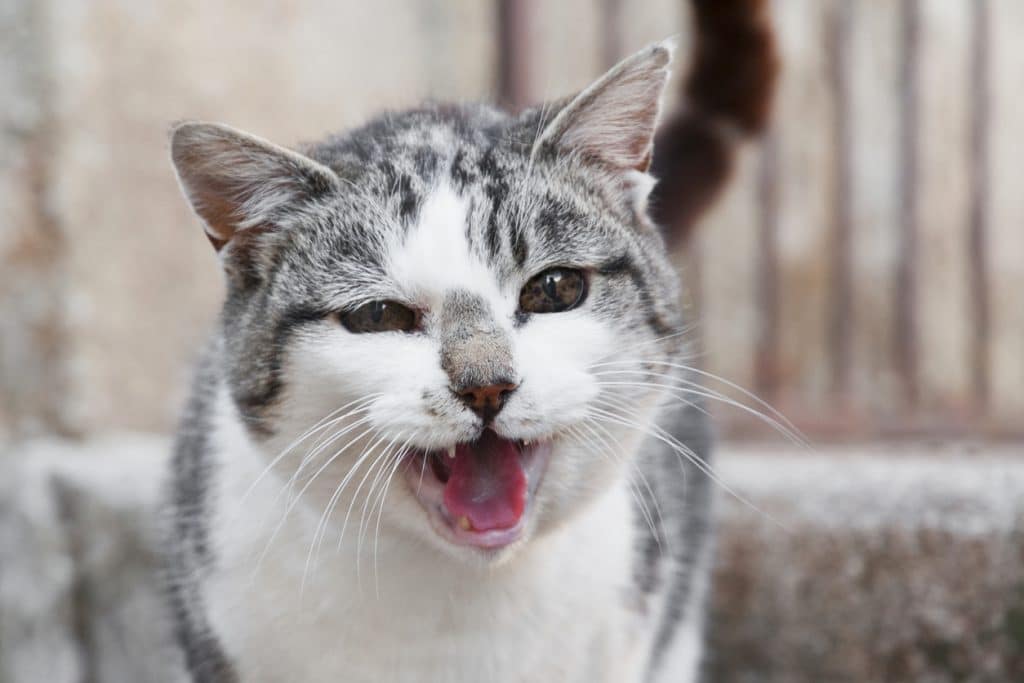 Just like us, age can cause degenerative changes in a cat’s brain. Known as feline cognitive dysfunction (FCD) you may notice changes in your cat’s behavior as they become more elderly. These can include disorientation, reduced social interactions, changes in sleep patterns, and increased vocalization.

Sometimes, a neurological problem can cause a cat’s brain function to deteriorate too. If you notice your cat’s behavior changing, or any signs like seizures or head shaking, it’s important to speak to your veterinarian as soon as possible.

A cat’s diet can affect their cognitive function, and this is especially true for kittens whose brains are still developing rapidly (until they’re up to 18 months old, remember?). “Always choose a complete and balanced diet designed for the growth and development stage,” said Dr. Kornreich.

As your cat grows older, make sure their diet is rich in omega-3 and omega-6 fatty acids, taurine, and other essential nutrients too. If you want to check that your cat’s diet is suitable, or are thinking about making any changes, always speak to your veterinarian first. 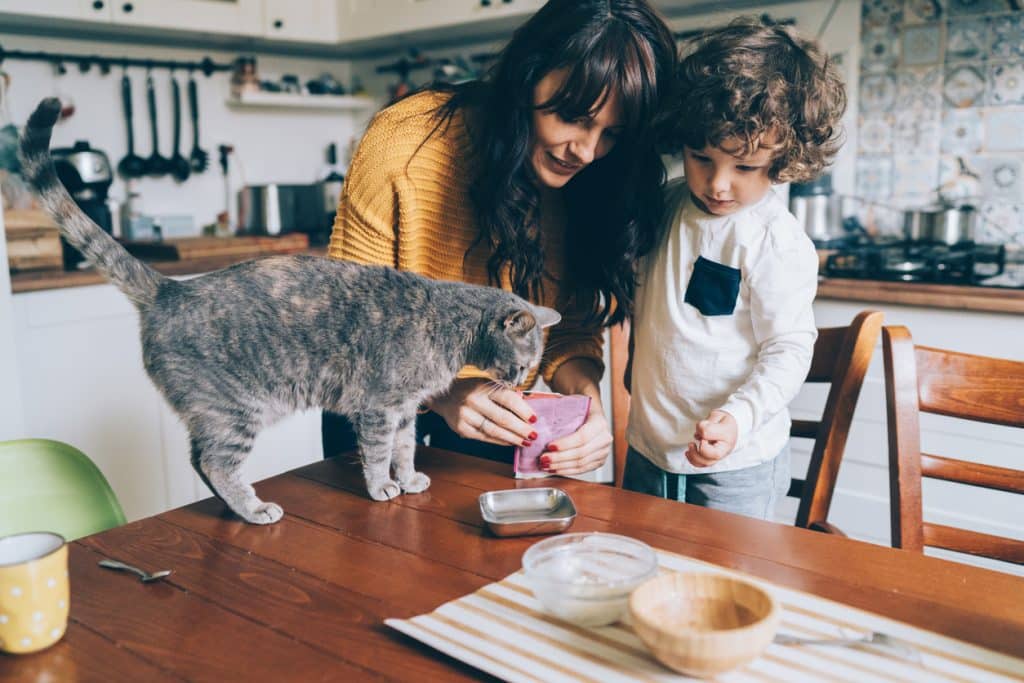 Object permanence relates to understanding that an object still exists even when we can’t see it. Babies learn this at around eight months old, and research suggests adult cats also possess this skill. If you’ve ever seen your cat chase a toy under the couch and sit and wait looking at the same spot, that’s object permanence. Dogs also possess this skill, although it’s not present in all mammals.

While it’s tricky to directly compare feline and human intelligence, studies suggest that cats are around as smart as a two-year old child. Perhaps they’re even smarter — they just choose not to indulge those scientists who are trying to test them!

Cats Have Some Concept of Time

Cats have a limited concept of time, with research showing that some cats can discriminate between different intervals of time. These abilities can be quite detailed, with some cats being able to tell the difference between eight seconds passing, and 10 seconds passing. It’s not yet known at what point in a cat’s life this skill develops as studies have only been carried out on adult cats.

On a wider scale, cats also have a general concept of time passing — as evidenced by any pet parent who left their cat home alone a little longer than usual and missed their cat’s dinner time!

We Always Knew Cats Were Amazing

Any cat parent already knows how smart their own pet is — but there’s still a lot we don’t know about the brains of our feline friends. We might have discovered what their tail language means, and why they slow blink at us, but there’s still so much more to discover about exactly what’s going on between our cat’s ears. 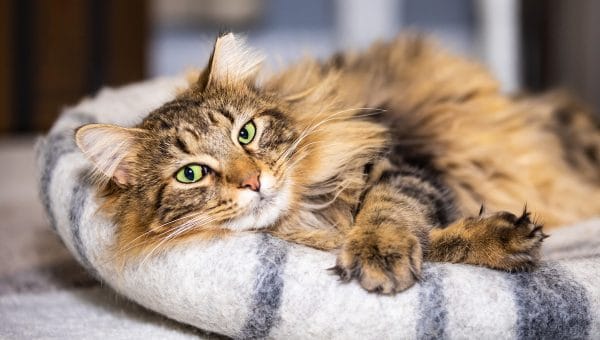 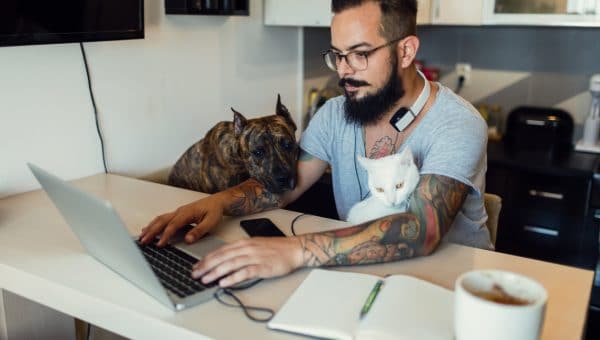