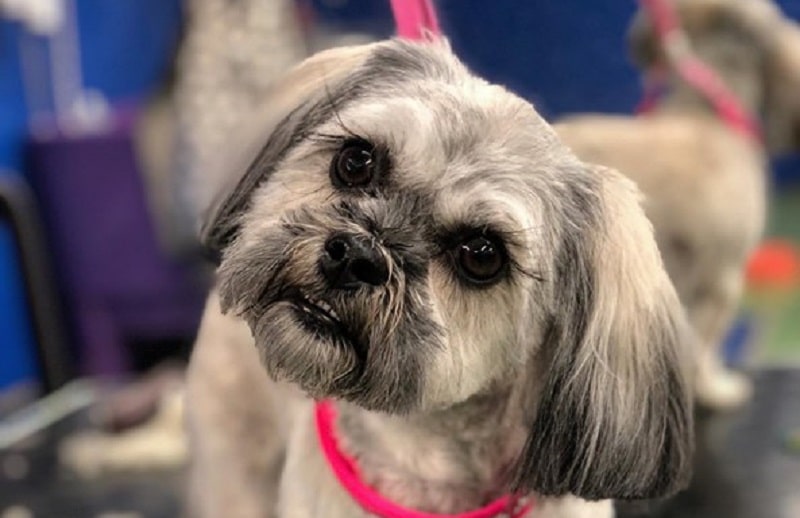 A tiny dog that looks like an actual teddy bear might sound like an impossibly tall order, but it’s not. That dog exists, and it’s called a Zuchon.

A mix between the Shih Tzu and the Bichon Frise, the Zuchon (also called the Shichon and Teddy Bear Zuchon) is a tiny designer dog that packs a lot of love.

If you’re thinking about bringing a Zuchon dog into your family—or if you’ve recently brought one home—here’s everything you need to know about this small but mighty breed.

The best accessory for a woman – handsome man! 😂 #bibo #zuchon

Since the Zuchon is a mixed breed dog, it’s not always possible to predict exactly what it will look like—a Zuchon pup can take on the looks of either of its parent breeds and may favor one breed more than the other.

One thing you can almost always count on, though, is that your Zuchon will have a big, fluffy coat—that’s what gave it the teddy bear nickname, after all.

Since both the Shih Tzu and the Bichon Frise both have soft, long coats, you can expect the Zuchon to have this coat too. The hair may be curly, or more silky and wavy. The Bichon Frise is almost always white, but because the Shih Tzu comes in many colors and has no standard color of coat, the Zuchon doesn’t either.

You can expect Zuchons to fall somewhere between their parent breeds in size. They’ll be small!

As far as grooming goes, Zuchons don’t require as much effort as you might think. According to Pet Guide, they need to be brushed every few days to avoid knots and tangles in their coats, though that can be reduced if their hair is kept short.

A popular style for Zuchons is a tight cut called a teddy bear cut (are you seeing a theme yet?), and a short cut like that will reduce—or even eliminate—the need for frequent brushing.

Yess!! I still fit my #christmassweater from last year.. ❤️

Don’t let their small size fool you. Zuchon dogs are known for having big personalities, and you can thank their Bichon Frise bloodline for that. Taking after that parent breed, you’ll find the Zuchon is smart and charming… and able to use all of those qualities to their advantage.

Zuchons are also very social dogs, and they’re great with most people and animals. They’re eager to please you (and everyone else), and very much enjoy being the star of the show. They have high amounts of energy and love to play, but they can also be pretty laid back when it’s time to rest.

Basically, Zuchons are the best of both worlds.

Zuchons make excellent watchdogs and are always ready to alert you of intruders or new people in the area. Thankfully though, that’s about the only time they bark. Zuchons are not particularly yappy dogs—an unusual (and glorious) trait for a tiny dog.

Since Zuchon dogs are small, they can get most of the exercise they need by following their person around the house and chasing a ball around the living room floor or playing a game of tug-of-war. For this reason, they thrive in small spaces and will do fine in an apartment.

If you have a yard, it’s best that it be fenced. These smart dogs can find their way out if they really want to, so they should never be left unsupervised.

Zuchons are great with people of all ages and even do well in homes with small children. Shih Tzus are known to be especially loving with children, so there’s a good chance your Zuchon will display this trait and make for a great playmate for even the youngest members of your household.

While they can get most of their exercise at home, Zuchons still need daily walks or trips to the dog park to help them burn through all of their energy.

Your Zuchon’s very best quality is also what makes her so easy to train—she just wants to keep you happy!

Positive reinforcement should be your method of choice for this sensitive breed. They react well to praise and treats, but use harsh methods or discipline may have the opposite effect.

Zuchons are very social animals, but you must start socializing them at a young age to make sure they live up to their abilities in this area. Take them to social settings, teach them to walk on leashes, and work on etiquette.

Also, since Zuchons become so attached to their families, they tend to suffer from separation anxiety. This severe anxiety about being alone is not only unhealthy for the dog but also for the state of your home.

Teach your Zuchon to be alone from puppyhood, leaving them at home alone for short periods of time. It may also be helpful to crate train your Zuchon.

While it’s impossible to predict whether a Zuchon puppy will grow into a healthy adult dog, chances for that are good. According to the Institute of Canine Biology, a recent study has shown that mixed-breed dogs are less likely to fall victim to genetic disorders than their purebred counterparts.

While this is great news, it’s important to understand that Zuchon dogs are still at risk for any disease or disorder that’s common in their parent breeds. Shih Tzus may be susceptible to hip dysplasia, though good breeders should screen for this. Both the Bichon Frise and Shih Tzus are predisposed to a dislocated knee cap and a wide range of eye disorders.

History of the Zuchon

The Zuchon itself is a very new breed of dog that got its start in the United States. Since the breed is so new, there’s not much history to go with the Zuchon alone—to really understand the history of the Zuchon, you have to understand the origin of its parent breeds.

The Shih Tzu is of Chinese origin, bred for Chinese emperors, probably by crossing the Lhaso Apso and Pekingese. The stayed spoiled in China until the 1930s when they were further refined by breeders in Peking and England. They were registered by the American Kennel Club in 1969 and have been a favorite toy breed of Americans ever since.

The Bichon Frise started their development on the Canary Islands. They became popular with European royalty in the 13th Century, and we well-known by the Renaissance—though their days as royal lap days came to an end with the French Revolution in 1789. They were sent to live on the streets and came to be appreciated by street performers, who were enamored with their trainability.

Unfortunately, their second act of fame ended after the world wars, when many Bichon Frise again found themselves out on the streets. Eventually, the breed’s qualities were recognized by the Societé Centrale Canine in 1933. The American Kennel Club accepted the Bichon Frise in 1971.

Getting a Zuchon Dog

Anyone who’s ever brought home a new dog (and even most people who haven’t) know that getting a new dog is not a choice to make lightly.

It’s important to evaluate your home and lifestyle and decide not only if you’re ready for a dog, but what kind of dog is the best match for you.

No matter where you get your Zuchon, make sure you’re dealing with someone reputable. It’s important to meet the breeder or rescue organization in person, as well as the dog, before any money is exchanged.

Since Zuchons are a new breed, there may not be a lot of options for finding one through a rescue organization, but it is possible. Diligent internet searching will turn up options for rescued Zuchons, but you may have to travel. If the organization isn’t in your local area, do your research and ask questions to make sure they’re reputable.

There may be drawbacks to adopting a Zuchon through a rescue organization. It’s likely the dog you find will not be a puppy, and you may not be able to learn much about its past. However, its age may also be a plus—there’s a good chance an adult Zuchon will be house-trained, and it will likely have been socialized through the rescue. It will also have been spayed or neutered and will have received all of its required immunizations.

All of this greatly reduces the cost of ownership for you—as does the adoption fee, which is usually much cheaper than the price of purchasing a Zuchon from a breeder.

It’s often difficult to find reputable Zuchon breeders since they are not a breed registered by the AKC, and therefore won’t be listed among their approved breeders. Before you commit to a breeder, ask around about them—your vet or other local breeders may be a good resource.

Want to know more about Zuchons? Dig into these articles about their parent breeds!