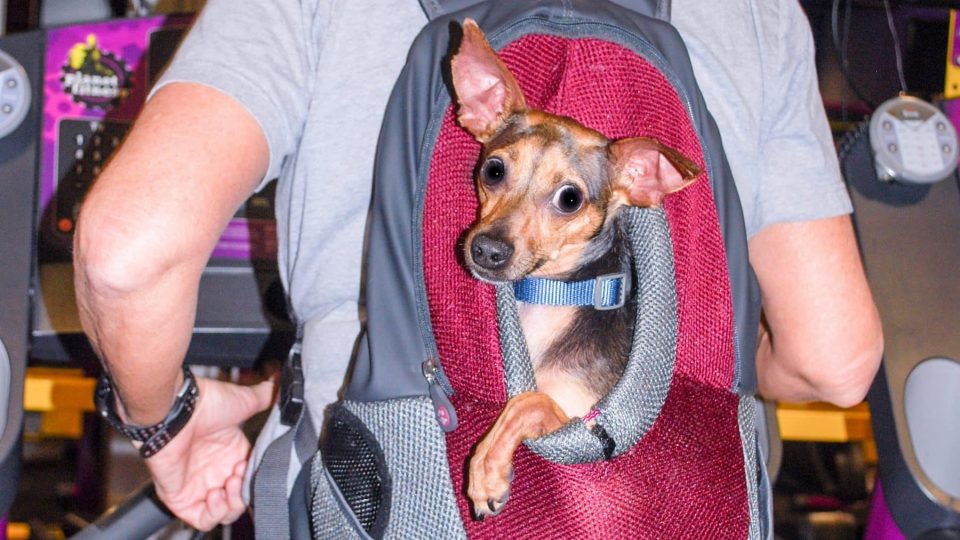 Janet Turner didn’t love to run, but it was the balm for her anxiety, and it helped her boxer Moose cope with his anxiety as well.

“I hated running but running with a dog made it pleasurable,” she said.

Running to soothe anxiety was the beginning of a mutually healing relationship for Turner and Moose. “It seemed like common sense,” Turner said. “Moose was having emotional trouble and so was I. Exercise is good for people and you know it’s good for dogs.” 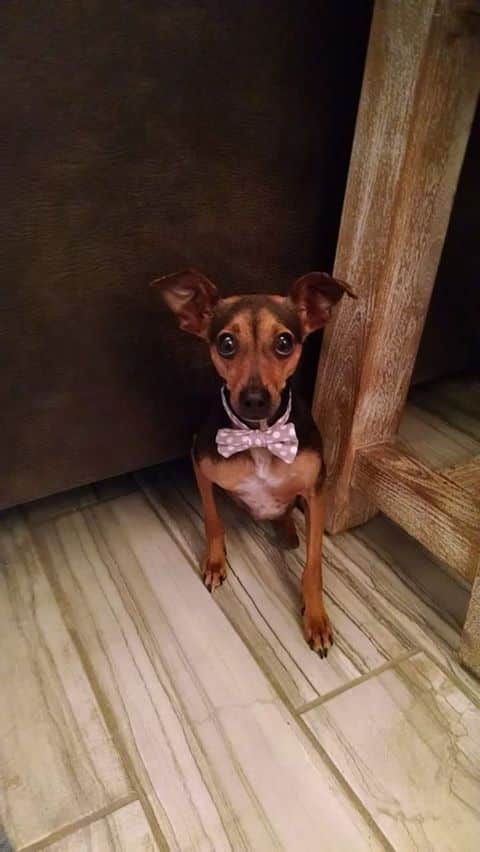 Turner, an animal advocate, began running at 13 and then went on to run competitively in college. She continued running after college as it was better than taking prescription drugs for her anxiety.

For seven of those years, Turner ran with Moose by her side. Given Moose’s emotional struggles, caring for her was almost a full-time job—until Turner lost Moose two and a half years ago. “I didn’t think about my own anxiety because I focused on her,” Turner said. “When I lost that, I felt I lost a bit of me and my purpose.”

Determined to Save a Dog

After Moose, Turner wanted to help another dog with a disability. “I needed a dog who was a little more of a challenge,” she said.

It prompted Turner to search for a special needs dog. She soon found Gordon, a miniature pinscher who only had two legs. “He was so stinking cute and precious,” Turner remembered about first seeing the dog who hovered when he walked. “It was absolutely heartwarming. I knew immediately when I saw him that he was the dog for me.” 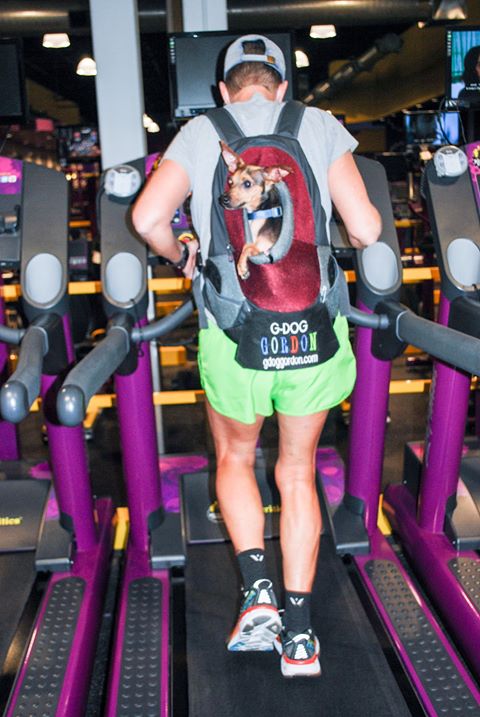 Gordon’s story was heartbreaking. He was shot in his right shoulder and the bullet is still lodged in his lower spine. Spotted dragging himself along the road, a compassionate passerby rescued him and took him to a shelter. His right leg was eventually amputated along with the toes on his left foot.

When Gordon first arrived at Turner’s home in February 2017, he didn’t want anything to do with her. It took some months before they established an unbreakable bond.

Turner started running with Gordon in a backpack because even though he can walk, he can’t keep up. For every step Turner takes, Gordon has to take 15.

The first time Turner ran with Gordon in the backpack, she filmed him with a selfie stick, so she could check on him. “He was just chillin’,” she laughed. “He had one arm outside of the pack, which is how he runs today.” 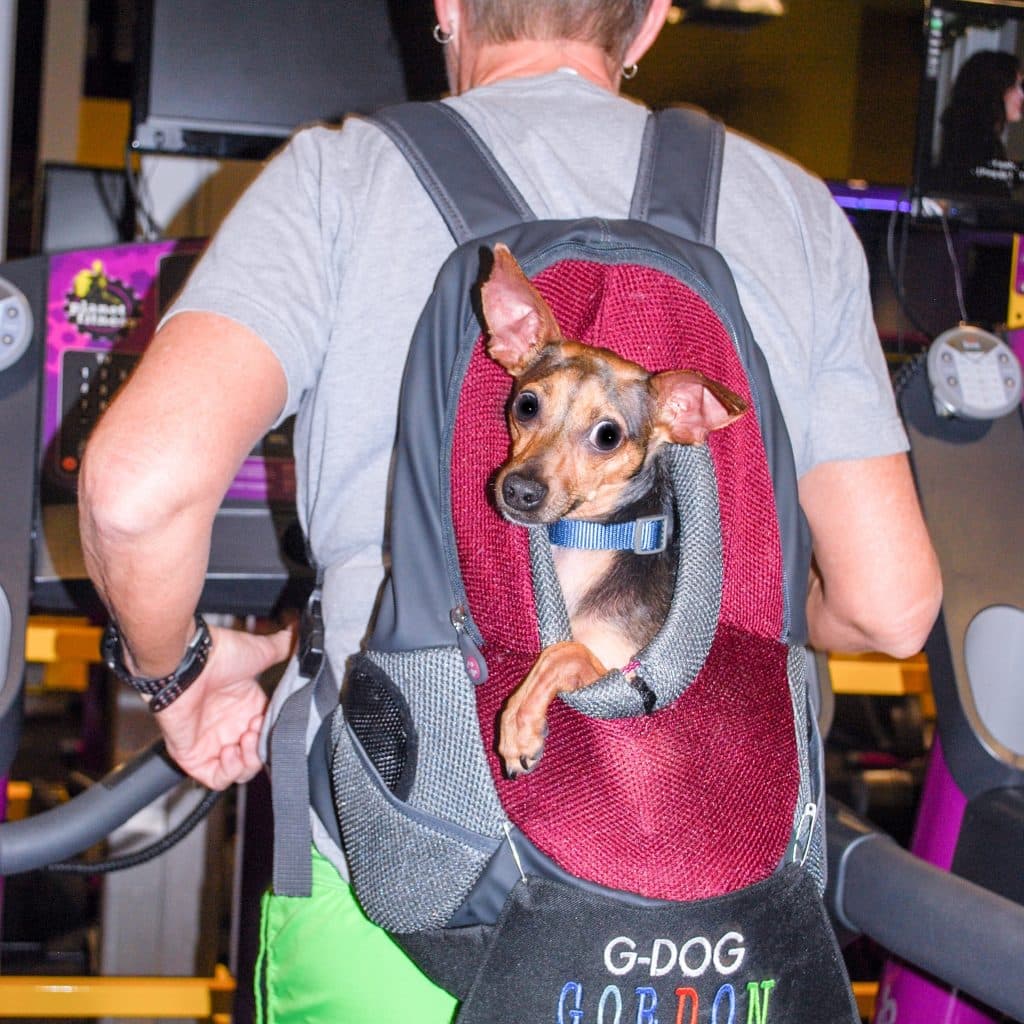 Running with Gordon evolved into something even bigger—a social media movement. Turner started using the hashtag #RunningForRescues to help awareness for the plight of shelter pets and disabled dogs, and she’s helped turn that awareness into fundraising for rescue groups and shelters.

To date, Turner and Gordon have run six races together. Turner posts the races on Facebook along with the shelter she chooses to help for each race. They have raised $15,000 in 20 months for local shelters and rescues.

People have been very positive, taking photos and cheering them on when they run. Typically, Gordon hides during the first half mile of a race, but then he pops up and hangs his arm out.

In 2018, Turner resolved to adopt another special needs dog and turned to Robbie Miller, founder of SOS Dog Rescue in California to help her find one. He heard about Molido, a dog saved off the streets of Thailand by Soi Dog Foundation, who is paralyzed from the waist down.

The organization worked with Melissa Zudweg Borden of The Devoted Barn in Michigan to help bring Molido to Turner’s home in February 2019. Borden drove nine hours from Michigan to pick up the dog in Washington, DC. and then drove her to Turner in West Virginia. 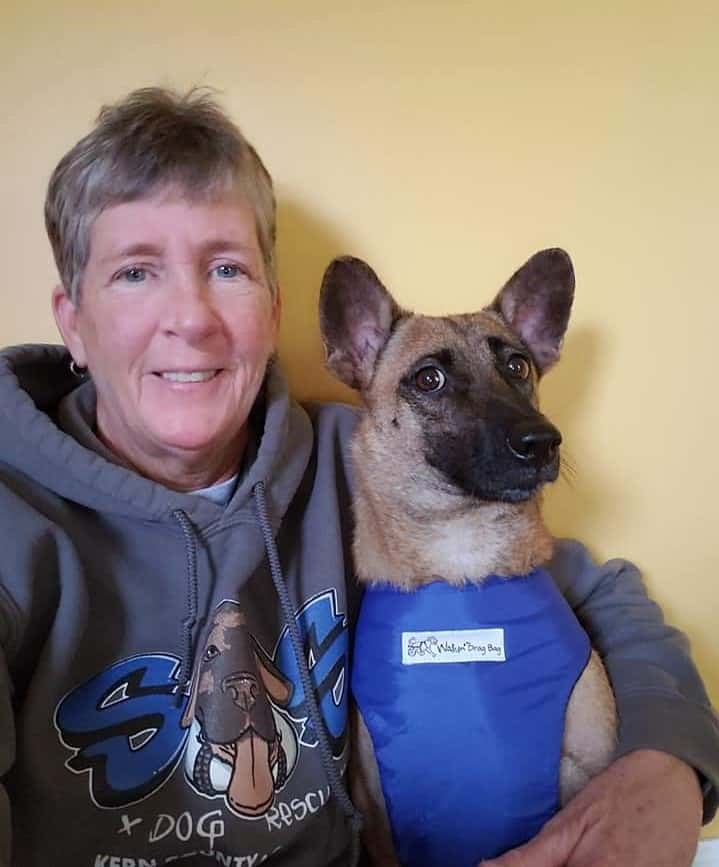 “Molido was different,” Turner said of her arrival in West Virginia. “She’s a feral dog, so I sat back and let her take everything in.”

Turner waited hours before trying to touch and pet the fearful dog. Molido had never touched carpet, had never been in a house, and had never seen a ceiling fan. “She was overwhelmed. She sat at the front door and stayed there most of the evening before we went to bed.” 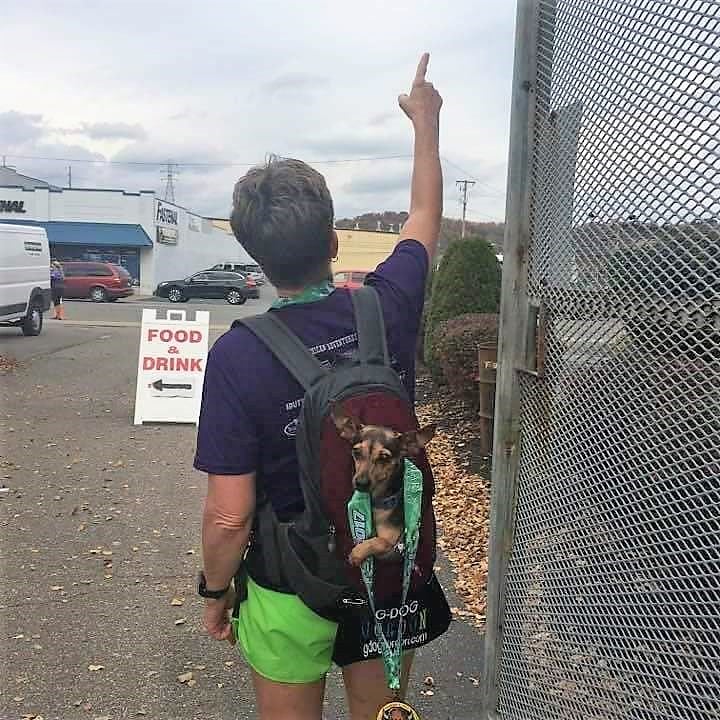 And while the first week was a bit rocky, Molido warmed up. “I didn’t force it with her,” Turner said. “Now we are inseparable; she finds comfort in me. She actually presses her head up against me. She won’t eat until I sit down to eat.”

Molido won’t race with Turner because she physically can’t run and is too big for a backpack, but Turner hopes to bring her and Gordon along to races and events to help fundraise.

“She’ll be part of the team and shed more light on shelters and special needs dogs who don’t get visibility because they get euthanized when they get to the shelter, or people don’t seem to want dogs who have challenges,” Turner said. 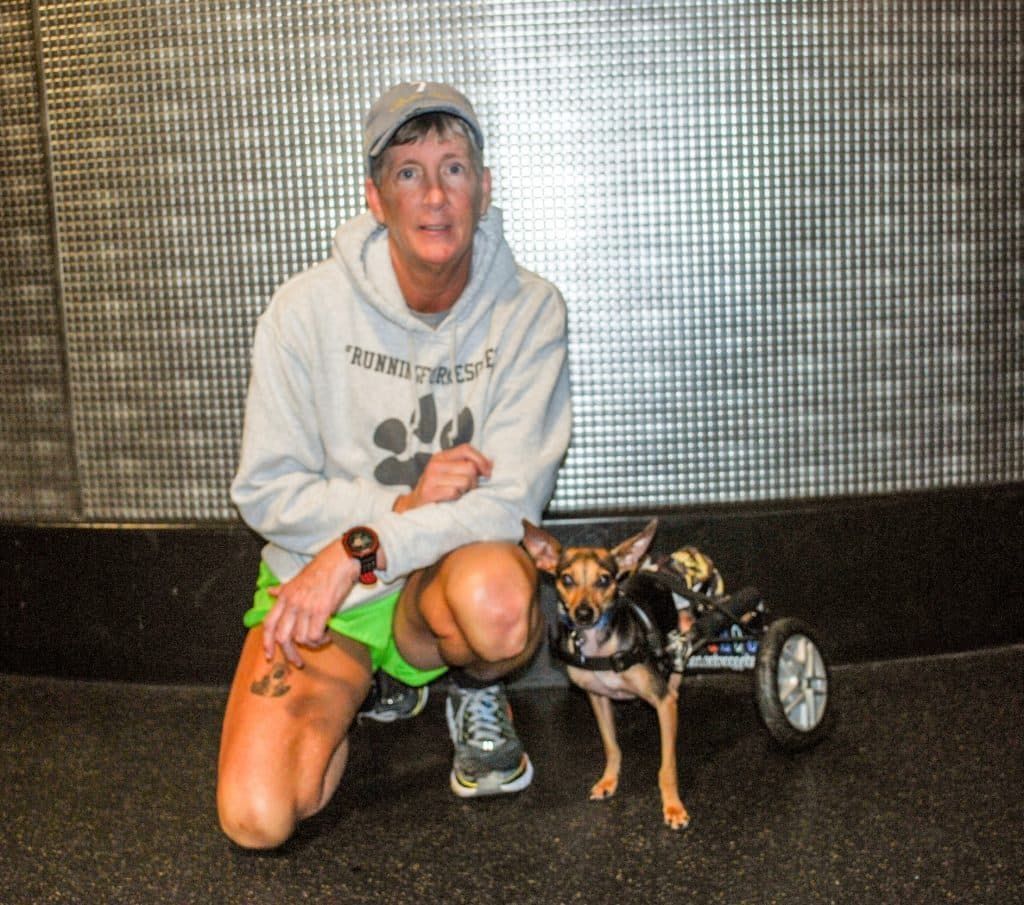 To this day, Janet and Gordon continue to work to bring awareness, get more people on board, and raise funds for shelters, especially smaller ones that don’t get much visibility, including the Pleasants County Humane Society in Turner’s own neighborhood.

“The more awareness we bring in communities, the more support we’ll get for local shelters and rescues,” Turner said. “People are more apt to help their own communities and that’s exactly what we’re doing.” 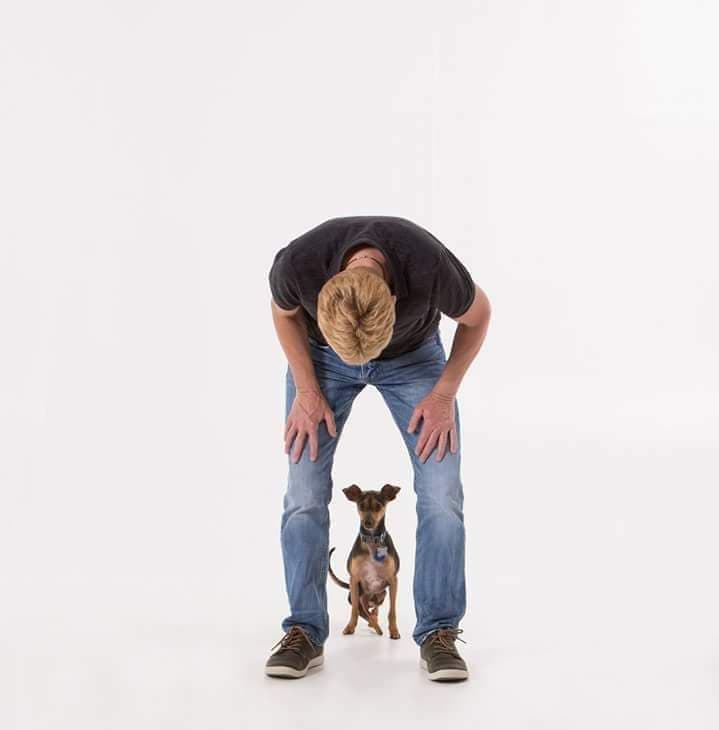 Older and special needs dogs need extra help. “Just because a dog has challenges doesn’t make them less worthy of being adopted or less loveable,” Turner said. “Those dogs are perfect—they just do things a little differently.”