John Dalley didn’t waste any time when his organization, Soi Dog Foundation in Phuket, Thailand, received word from German tourists that an emaciated and paralyzed dog was dragging herself along the road of a national park 100 miles away.

Dalley and a staff rescue officer drove to the park and found the dog who they would later name Molido. Although she was paralyzed, she tried to run away from them because she was terrified. “We tried to get close to her with barbecue chicken but no luck,” Dalley said. “She could move remarkably quickly and gave two old men a run for their money!” They eventually coaxed her out of some undergrowth and brought her back to the Soi Dog Foundation shelter hospital. 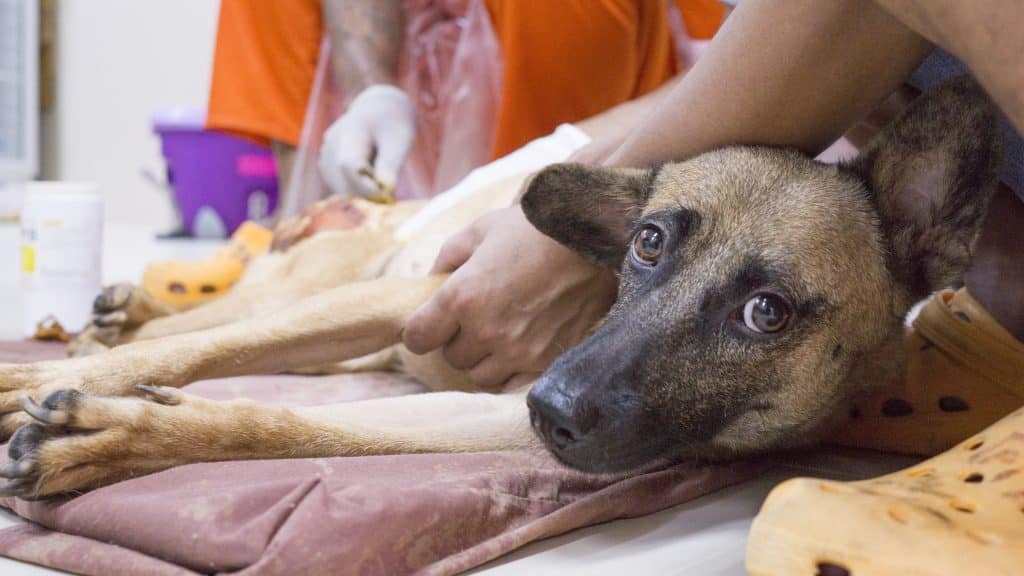 Molido arrived at the shelter in January 2017. She was approximately three years old. Although there is no way to know for sure how she became paralyzed, she most likely was hit by a car, according to Maeve Henry, head of creative at Soi Dog Foundation.

“Molido was so scared, confused, dehydrated and in pain,” Henry said. She was given a medical workup to try to determine the extent of the damage. She had infected sores on her back legs, rotting tissues, was infested with fleas, and was anemic as well as very weak. An X-ray showed her spine was fractured.

Soi Dog’s medical team tended to Molido’s broken body. They first had to stop any infection and then started Molido on antibiotics. They tended to her sores, cleaning and dressing them. In order to build up her strength, Molido received regular meals as well as nutritional supplements, according to Henry. She received intensive care for about two months.

Though Molido was afraid, she was not aggressive with her caretakers. “While she was not very relaxed, she became more accustomed to it the more she was repeatedly handled, especially when she learned they were not going to hurt her,” Henry said. “It was a very slow process.”

After a week at the hospital, Molido received a physiotherapy assessment from Dr. Priya Streram, a veterinary physiotherapist, to determine if there was a chance of walking again. Molido had severe muscular atrophy, weakness, and scarring of the tendons. She had a poor chance of recovery, but they decided to try the physiotherapy because she had some sensation and a little movement in her hind limbs. 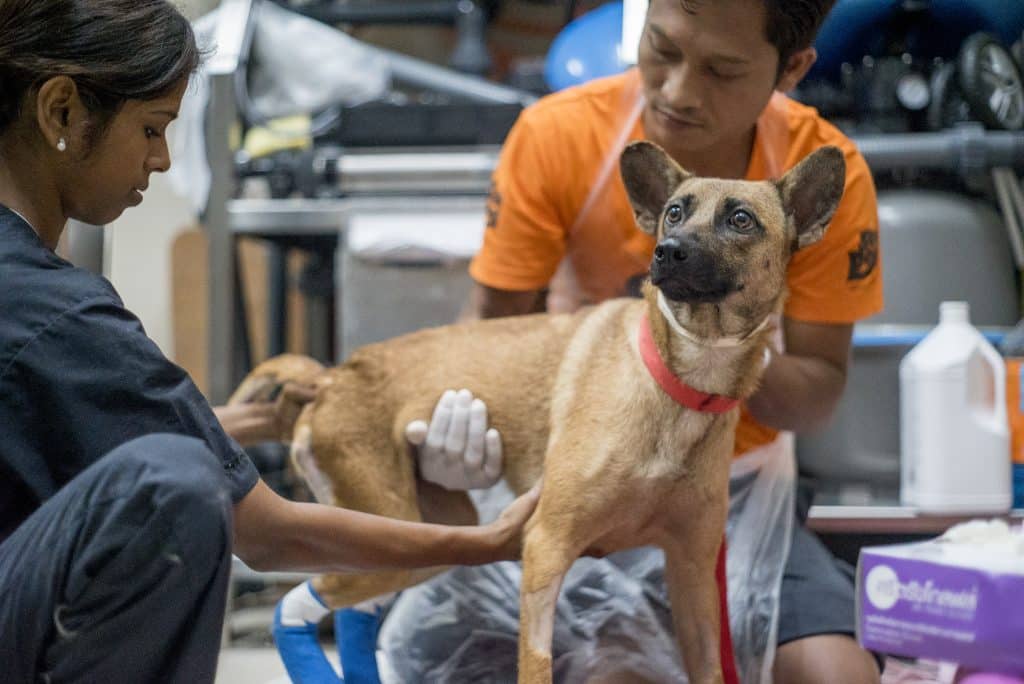 She received physiotherapy with Dr. Streram three times a week including passive range of motion exercise, stretching, assisted standing, and laser therapy to the part of the spine that was traumatized. After three months there was no physical improvement, but there was a change in her personality. The once fearful dog started to blossom and trust humans. She formed a close bond with her caretakers, which greatly helped her spirits.

Once Soi Dog experts determined that Molido would not walk, they got her a wheelchair. Due to the severity of her wounds, it was months before Molido was placed in the wheelchair, but she adapted swiftly. “She started learning how to use it, learning to move forward and how to reverse really quite quickly,” Henry said, adding that it was surprising how fast she managed it. 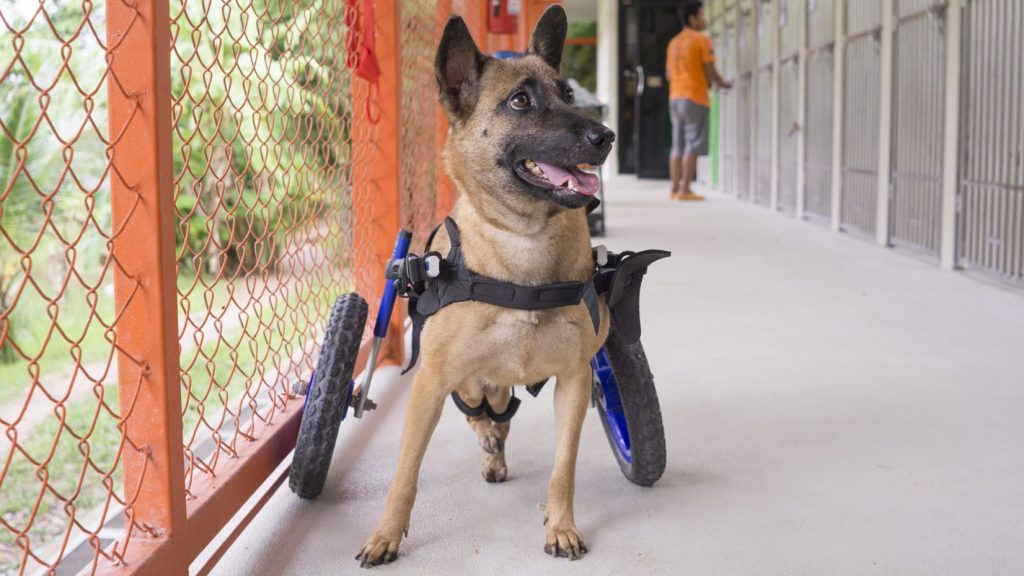 “Molido didn’t have much exposure to people other than the vets treating her,” Henry said. “She is a very quiet dog, very shy, very calm, and kind of wants to be left alone.” She was semi-feral when she was rescued, so she was very wary and not that comfortable being touched unless she was familiar with the person. “But she was happy in her wheelchair and happy with the vet caring for her.”

Most likely due to her past as a street dog, Molido didn’t really play with other dogs. But she loved being mobile. “Being able to move around pain-free was novel to her and she seemed pretty happy in her chair,” Henry said. 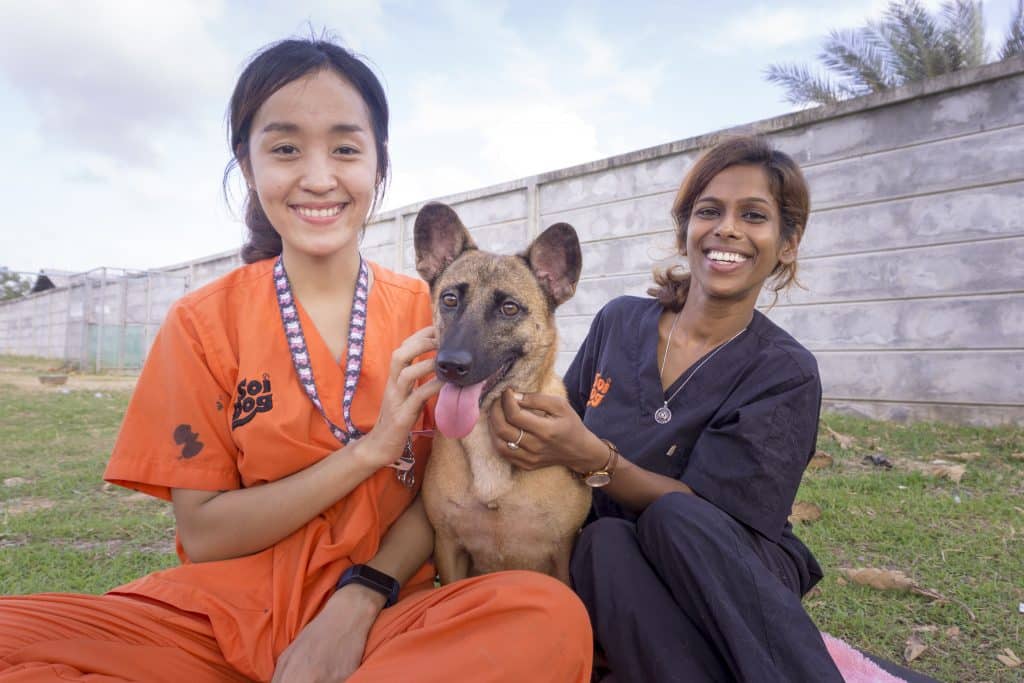 A Home for Molido

The wonderful news is that Molido was adopted into a home of her own in the U.S. “Soi Dog has a network of partner rescues in the U.S. and Canada that help us rehome some of our dogs,” Henry said. Molido’s adoption was secured through Devoted Barn in Michigan.

On January 29, 2018, Molido left the Soi Dog shelter for her new home in the U.S. She arrived safe and sound on February 9, where she was greeted by her new pet parent, Janet Turner, who had been waiting impatiently for Molido’s arrival.

“Molido has settled right in with her other four siblings like she has always lived here,” Turner said. “This is Molido’s first experience with snow. I am so excited to share her future with her.”

A Story of Hope: Video

Molido’s story, captured here in this moving video, is now a finalist in the Charity Film Awards.

Read our other story about a Soi Dog rescue who received prosthetic legs.

For more information on Soi Doi and to find out how to sponsor a dog, click here.