Seattle – December 2, 2016 – Rover.com, the nation’s largest network of pet sitters and dog walkers, today unveiled the results of its fourth annual report on the most popular dog names of the year. For the fourth year in a row, human and food-inspired names are among the year’s most popular, while names inspired by Pokémon Go, “Hamilton” and “Stranger Things” stood out as the new trends of 2016.

Rover dug into its data, one of the nation’s largest databases of dog names, and found this year Americans were inspired by everything from Harry Potter to food. The top baby names of the year were among the most popular dog names, and dogs with celebrity baby names like Apple and Shiloh rose 8 percent. Pet parents are also naming their dogs after their favorite indulgences, with junk food and alcohol-themed dog names on the rise in 2016.

“Decades ago, dogs were simply our pets and the names we chose for them, like Spot or Rover, demonstrated that. As that relationship has evolved, ‘pet owners’ have begun to think of themselves as ‘pet parents,’ and dogs are part of their families,” said Rover CEO, Aaron Easterly. “As the bond between people and their pets grows, we’ve seen a shift in how pets are named. The way we name them, sheds light on that unique human-dog relationship and reflects our personalities, cultural trends and the things we’re passionate about, from politics to celebrities.”

Top Dog Name Trends
According to a Harris Poll survey, 95 percent of pet parents consider their dog a part of the family, so it’s no surprise dogs are named more like human family members than pets. In fact, 28 percent of dog names are decidedly human, a number that has been steadily increasing over the years, and is up 2 percent from last year. 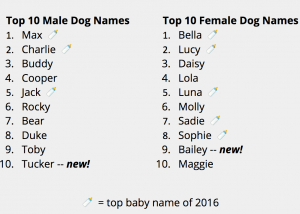 Pet parents often look to popular culture for inspiration when naming their dog. A recent survey of dog owners found 53 percent, including 75 percent of Millennials, named their dog after a movie or TV character, book character or celebrity.

As human names rise in popularity, there’s been a steady decrease in “cutesy pet names” for dogs, like Pookie and Snuggles, since 2014. This year, “cutesy pet names” decreased nearly 5 percent. Likewise, “classic dog names” like Fido and Sparky are falling fast, steadily declining a few percentage points each year, and falling 9 percent from 2015 to 2016.

Today, Rover also launched the Dog Name Generator to give humans a taste of a dog’s life and discover what their dog name would be. Using Rover’s database of names, the generator matches pet lovers to their perfect dog name based on their name and date of birth. Visit www.rover.com/my-dog-name to discover your dog name.

Rover.com connects pet parents with the nation’s largest network of loving and trustworthy pet sitters and dog walkers. Through Rover, pet parents can discover, book, and manage personalized care for their dogs, including in-home dog boarding, pet sitting, dog walking, and doggy day care. Founded on the belief that everyone should have the opportunity to experience the unconditional love of a dog, Rover improves and simplifies life for pet parents and the dogs they love. By removing common pet care obstacles, Rover ensures dogs nationwide are happy and well-cared for even when their owner is away and empowers dog lovers to live fulfilling lives. Services are booked through Rover every minute of every day, and more than 92% of the population lives within a short drive of one of the more than 65,000 sitters who’ve listed their services. Over 95% of reviewed bookings have received a perfect 5-star rating. The platform offers premium insurance for all services booked through Rover, secure online payments, world-class customer support, vet consultations, a 24/7 team of trust and safety experts, Rover Cards with walk mapping and activity tracking, mobile apps, photo and video sharing, and general background checks for sitters.

The Top Dog Names report was developed by Rover between September and October 2016. Results are based on analysis of user-submitted data to Rover.com from hundreds of thousands of pet parents, pet sitters and dog walkers. 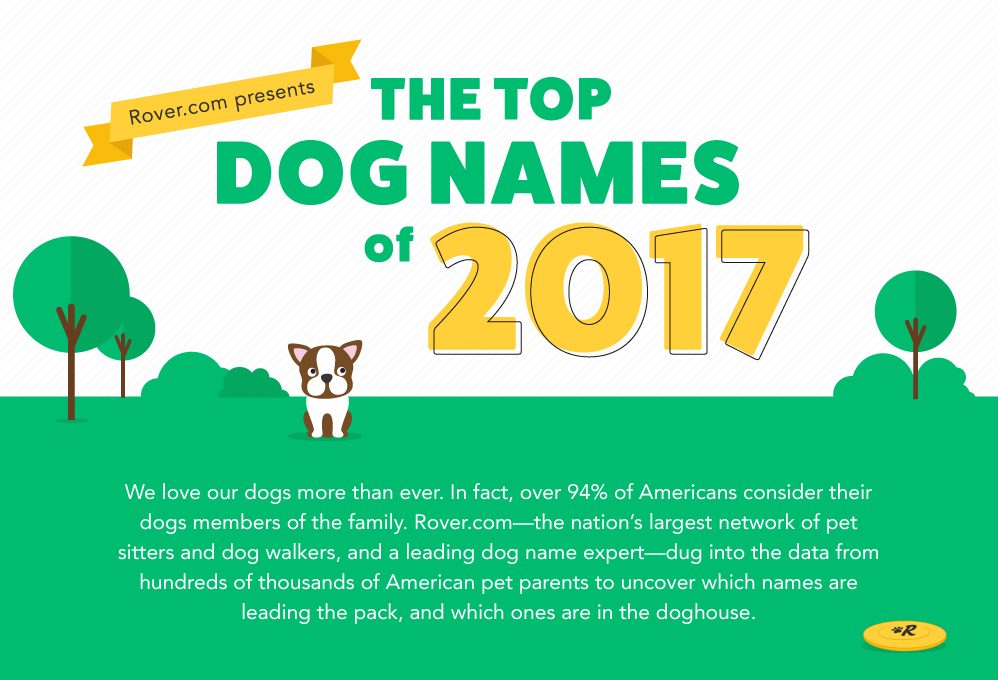 The Most Popular Dog Names of 2017