While this year’s COVID-19 crisis has impacted everyone, in Hawaii, the situation has been especially difficult for pets.

Usually, the Wings of Aloha program helps fly animals from overcrowded island shelters with limited space to mainland shelters that have more room, but when the pandemic hit, these operations stalled because of disruptions to routine flights, shut downs, and reduced hours across the rescue space.

Luckily, pet-oriented nonprofits Greater Good Charities, the John R. Peterson Foundation, and Wings of Rescue were able to step in and organize “Paws Across the Pacific,” the largest reported animal rescue flight in history, to bring 600 shelter dogs and cats from Hawaii to the Pacific Northwest, to be distributed among regional shelters for adoption.

Read on for details about this epic rescue mission and the herculean volunteer effort that made it possible. 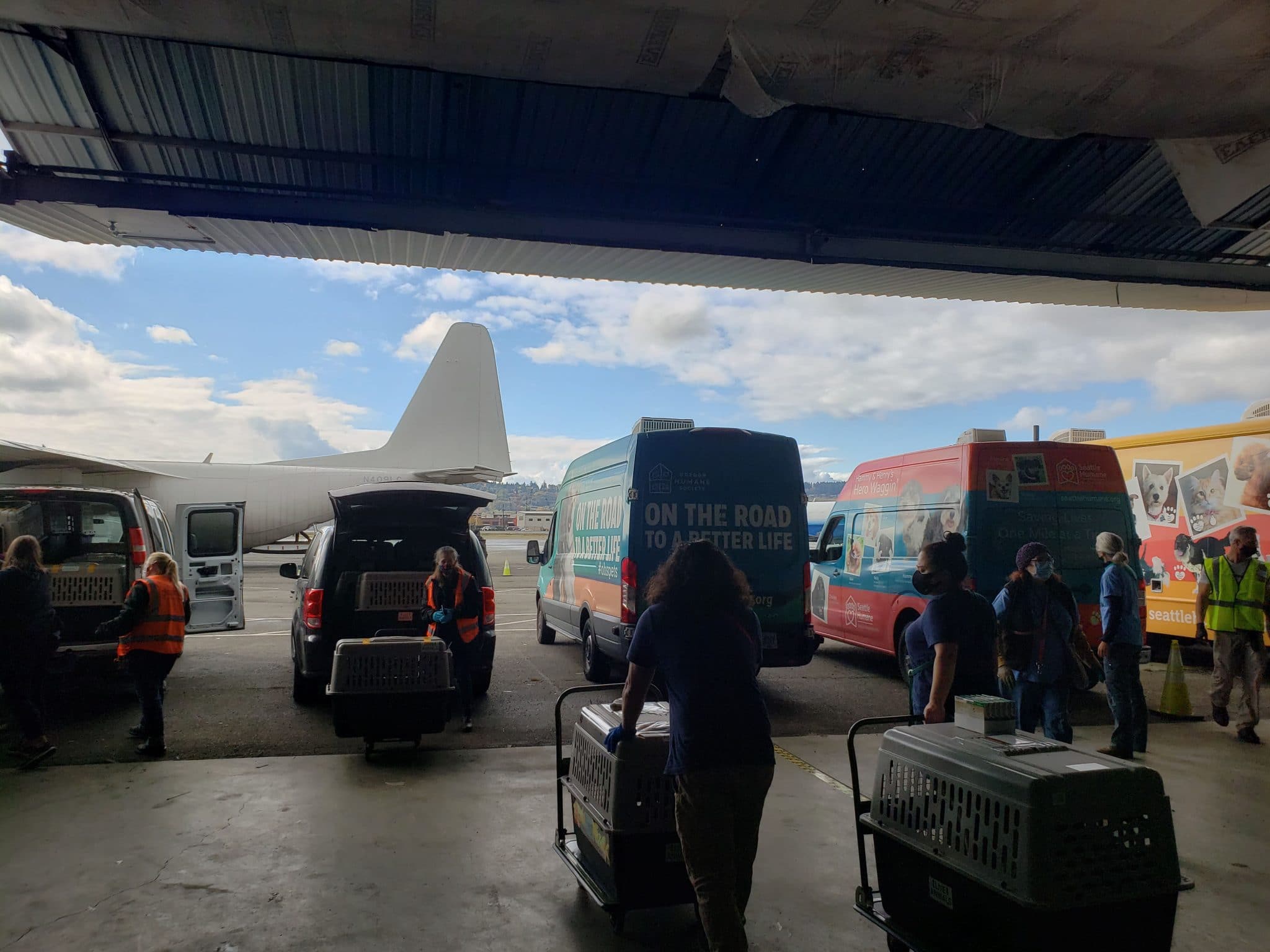 Getting the pets ready for the journey in Hawaii. Image via Seattle Humane

A Coalition of Partners—and Love

After procuring a Hercules C-130 cargo aircraft, a plane that was large enough to hold 600 cats and dogs in carriers, on October 29th, volunteers with Paws Across the Pacific journeyed from Oakland, California to the Hawaiian islands of Kauai, Oahu, Maui, and the Big Island of Hawaii, picking up pets at each island along the way, before heading to its final destination at Boeing Field in Seattle.

In Kauai, where the plane first touched down, there was a traditional Hawaiian blessing to protect all the animals on their special journey.

A high level of coordination between Hawaiian shelters, mainland shelters, dozens of hands-on volunteers, and sponsoring and in-kind donors including Royal Canin (which supplied all the food for the hungry pets along their journey) was needed to pull off the state-spanning rescue. In addition to playing a big hand in the whole production, Greater Good Charities supplied all the crates and provided shelters receiving the animals with critical medical supplies to help them support their new pets’ needs.

Every precaution was made to keep the animals safe and comfortable on their journey, with health checks coordinated through the Hawaii Veterinary Medical Association, and snacks, treats, cuddles, and more medical checks upon arrival in Seattle.

In Seattle, a number of pet rescues were on hand to welcome and receive the animals, who were then shuttled between various partner shelters across the region, including Seattle Humane, PAWS, Seattle Area Feline Rescue, Blue Mountain Humane Society, The NOAH Center, Humane Society of Skagit Valley, Kitsap Humane, Oregon Humane Society, and many others. 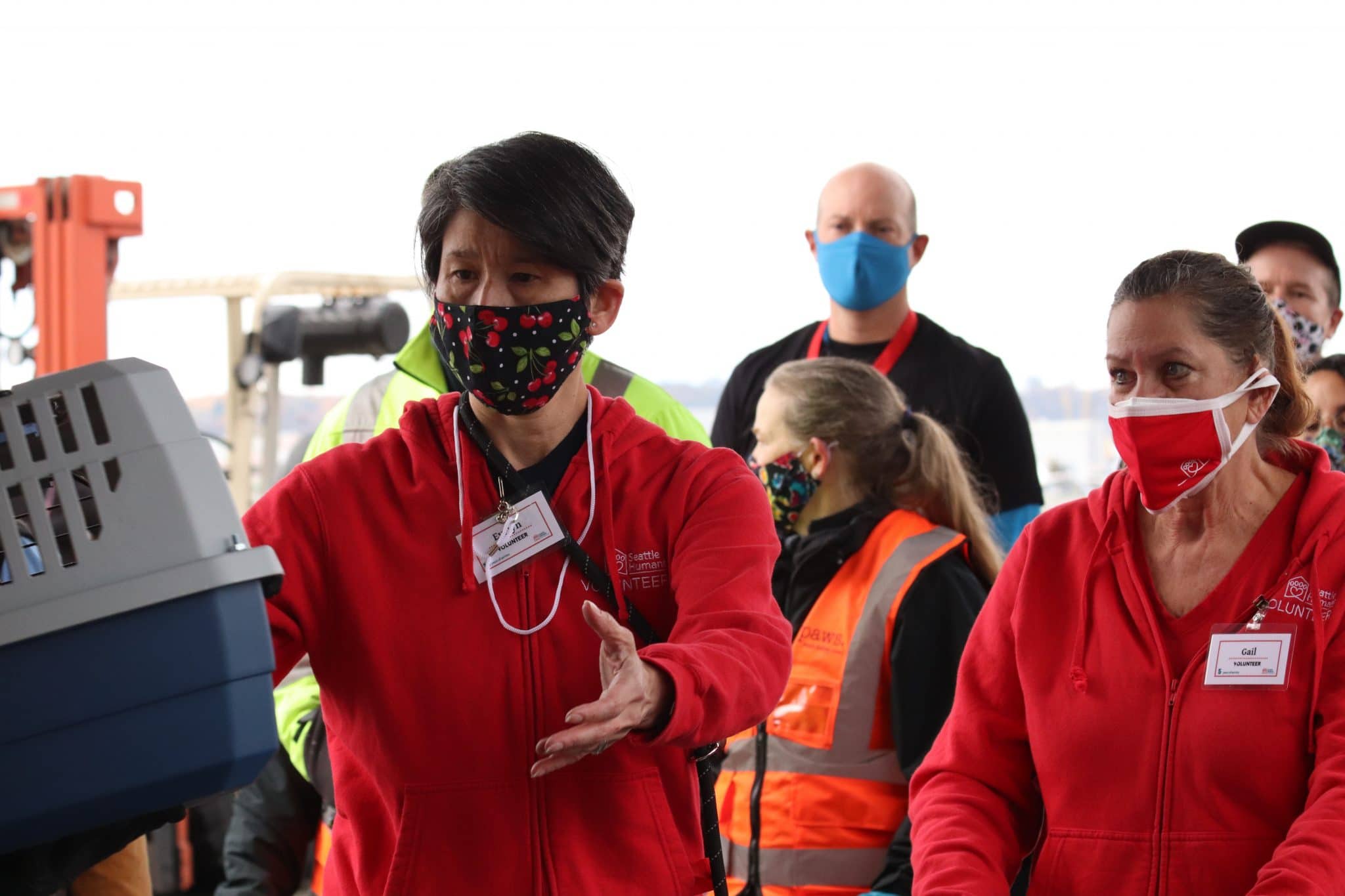 Receiving the shelter animals in Seattle. Image via Seattle Humane

The Pets: Where They Are Now

Now that the rescue pets are here, we checked in with Seattle Humane to see how the adoption process has been going.

Spokesperson Brandon Macz, (who details the rescue in this blog post), says, “It’s been a pretty wild ride—but in the best kind of way. From the moment word got out about the flight, interest was peaked, and we received loads of adoption inquiries about the animals.”

At the time of this writing, two of the eight Hawaiian dogs that went to Seattle Humane remain available for adoption; a larger number of the group’s 26 Hawaiian cats are available. Some need to be spayed or neutered, or have other health issues that need to be monitored or treated before they are available to adopt. Preparing the animals for a successful adoption takes time, and Macz urges those who are interested in adopting one of Hawaiian pets to be patient.

When they are ready, the pets are put up on the shelter’s website (you can tell which animals belong to the flight bunch by the little badge on their photo).

If you’re interested in adopting them (or any animals from Seattle Humane), it’s important to fill out a Pre-Adoption Questionnaire right away—because applications are processed on a first-come, first-serve basis. 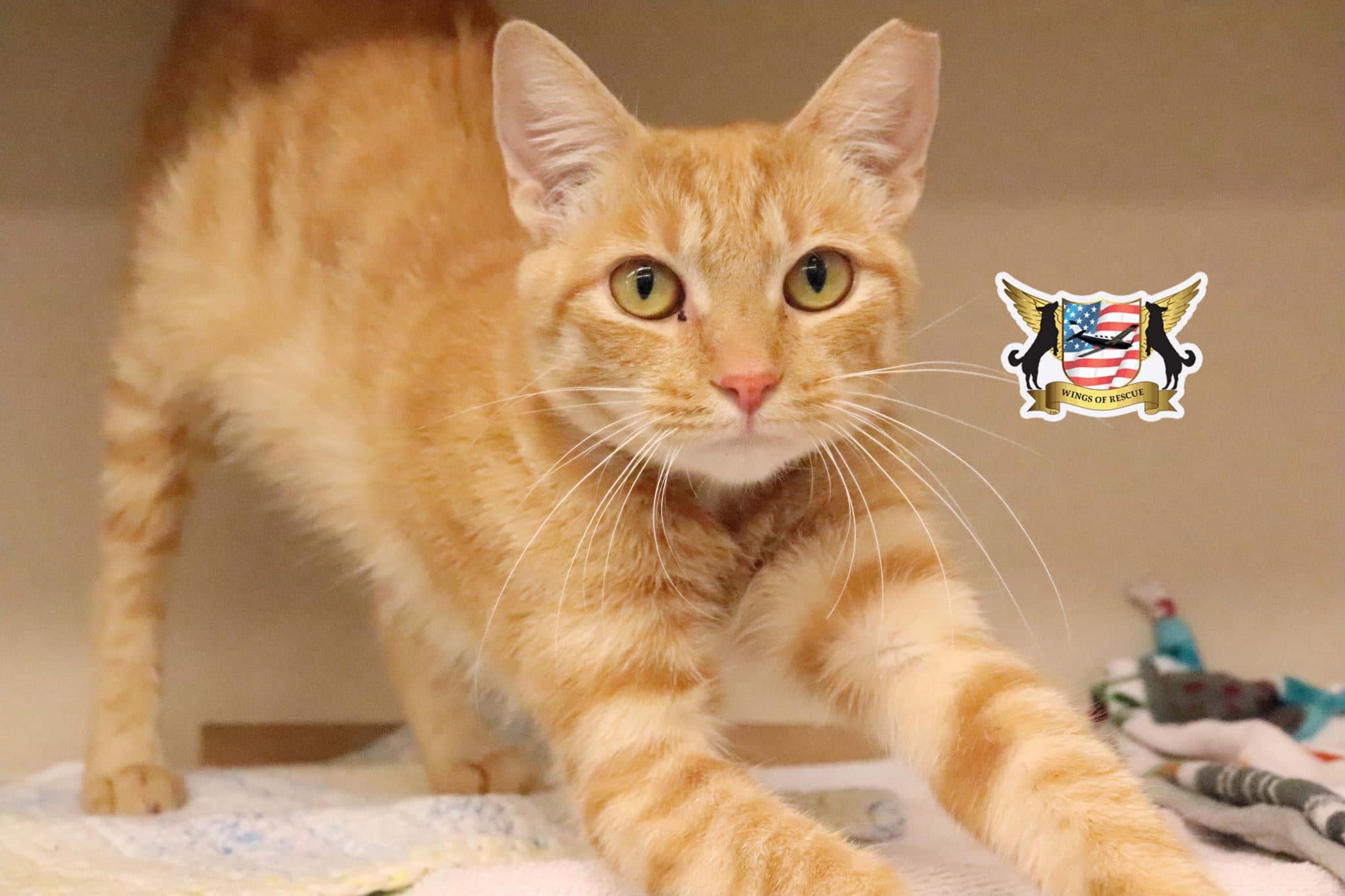 An adoptable kitty from Paws Across the Pacific. Image via Seattle Humane

Moma, a kitty who came from the Maui Humane Society, was recently adopted by a couple from Renton, Washington. Her new cat dad, Al Letterer, says of his recently added family member, “She’s had no problem adjusting to her new home. She’s probably one of the friendliest cats we’ve had. She’s very affectionate and is even good with the young grandkids. She’s a 5-star kitty.”

The family has renamed their new kitty Keona, which is Hawaiian for “God’s precious gift”—a fitting moniker for one of the special shelter animals who was safely shepherded from Hawaii all the way across the Pacific Ocean.