As more states pass legislation legalizing both medical and recreational marijuana for humans, pet parents are naturally wondering if they should give marijuana to their ailing or anxious pets. This guide takes you through the ins and outs of buying CBD oil for dogs.

If you’re curious about the legality, current research, effects, and dosage of medical marijuana for dogs, check out our in-depth guide to everything you should know about medical marijuana and cannabidiol (CBD) for dogs.

If you’re ready to buy and want real reviews on CBD products for pets, you’re in the right place. In this guide, we’ll give you some background on CBD, the potential benefits of CBD oil for dogs, and reviews from real dog owners on their favorite CBD products.

Please note that you should always consult with your veterinarian before giving your dog any type of supplement, including hemp-based products.

What Is CBD Oil? 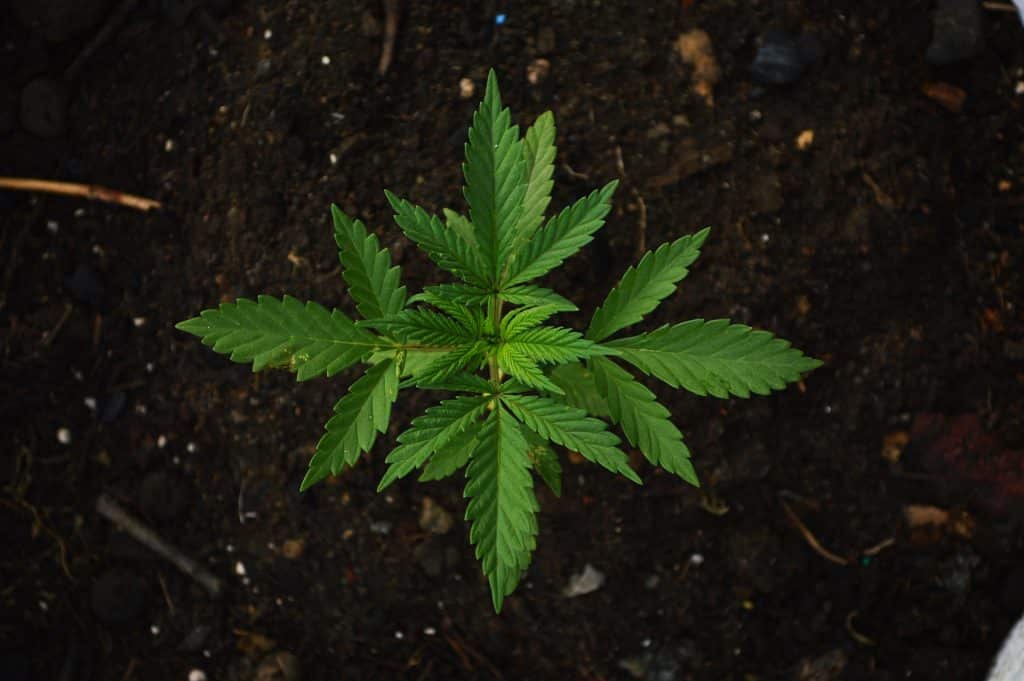 Cannabis has been medically legal in several states for over 20 years and commercially available in several others, including Rover’s home state, Washington. With legalization, comes more innovations and options, which is where CBD comes in.

The CBD sold online comes from the hemp plant, a close cousin of marijuana. Unlike the latter, CBD doesn’t have any psychoactive qualities, making it an attractive choice for parents and dog owners. Hemp also has barely traceable amounts of THC—less than 0.3%. This makes it a better choice for those not looking to experience the “high” THC that cannabis offers. CBD has been studied for its effectiveness in treating a wide variety of ailments, including seizures and some epileptic syndromes.

According to Harvard Health Publishing, the FDA has just approved the “first-ever cannabis-derived medicine for epilepsy syndromes” called Epidiolex. This, along with other research now possible due to legalization, has huge implications in the human health care industry, not to mention veterinary applications.

Dogs, like humans, can get comfort from CBD oil as well as CBD treats.

A Veterinarian’s Take on CBD for Dogs

Dr. Gary Richter of Holistic Veterinary Care in Oakland, California, is one of the leading proponents in that state to allow for the use of cannabis for animals.

He is a co-sponsor of SB-627, which would allow veterinarians to recommend cannabis for pets. Because it’s not yet legal to administer in the state of California, he can’t do so, but he says the health benefits that humans are experiencing with CBD and THC should be similar for dogs.

Though CBD has been removed from the controlled substances list, there’s a long way to go before it’s fully accepted. “At least in California, the Veterinary Medical Board still hasn’t issued any kind of position statement to change their previous position which was veterinarians aren’t allowed to do anything with hemp and marijuana,” he says.

Using CBD Oil for Dog Seizures and Other Health Issues

Dog owners who have access to legal CBD in their area have been familiar with its benefits for a while. Most of the pet owners I talked to use CBD to calm anxious animals.

Others gave their pet a dosage of CBD oil to help alleviate symptoms of pain. CBD—by affecting the endocannabinoid system in your dog’s body—affects your dog’s mood, appetite, memory, metabolism, sleep, pleasure, movement and coordination, and immune system response.

Dr, Richter weighs in: “CBD has a lot of potential medical benefits, including being an anti-inflammatory tool for pain. It can be used for seizures,” he says, and can be beneficial for cancer patients. “There are a couple of published studies out there looking at the use of CBD and animals. Using CBD for pain like arthritis, back pain, and other forms of inflammation is helpful.”

He also says it’s helped some animals control seizures and “it does have anti-cancer properties. I couldn’t really speak definitively as far as changing the course of cancer.”

Buying CBD Oil for Your Dog

You can give your dog CBD in several formats—oil tinctures and chewy treats are the most popular options out there currently. But the biggest piece of advice Dr. Richter has for people looking to give CBD to their pets is to check the ingredients and purity of the product.

“There are a lot of people selling products out there. And quality is certainly a big concern.” Dr. Richter also advises that consumers look for a “Certificate of Analysis,” which should be able to show what is in the product, as well as the guaranteed potency. In some cases, this must be requested from the company before purchasing the product.

“Are there any pesticides, fungicides heavy metals, etc.—these are the kinds of things that people should really be looking for. Without any regulation, the sky’s the limit. And this is part of the problem. Is there any guarantee that what it says on the label is really what’s in the bottle? The Certificate of Analysis is helpful for that. It’s a tough landscape. And honestly, it’s a tough landscape in the supplement market in general, because of all of those reasons and because there’s so much money to be made in CBD.”

If you’re thinking of giving your dog CBD oils or chews, Dr. Richter says, “I would always recommend that people have a consultation with a veterinarian before they start giving any kind of cannabis product to their animal.”

As with humans, dosing is key. Jason found that out when first using CBD treats with Sumo, his hyperactive French Bulldog. The first go-round, they gave him a 5 mg bite and broke it in half, and gave him the other half later. “Totally faceplanted the first time,” he reports, “so we knew to use only half.”

According to Dr. Richter, “The dosing can be as high as two milligrams of CBD per kilogram of body weight twice a day.” Of course, every dog is different, and caution is key.

A good rule of thumb to follow is that you can always increase a dose, but can’t do much about an overdose other than waiting it out. (With some extreme cases needing veterinary care.) If you’re unsure about what you need to watch out for with CBD and possible overdose symptoms, it’s a great idea to have a conversation with your vet.

Is CBD Oil Better than CBD Treats for Dogs?

Let’s say you’ve already done your research, and checked in with your vet. You’ve decided CBD oil is right for your dog, but aren’t sure where to start. Should you use oil or CBD treats? What kind of response can you expect? 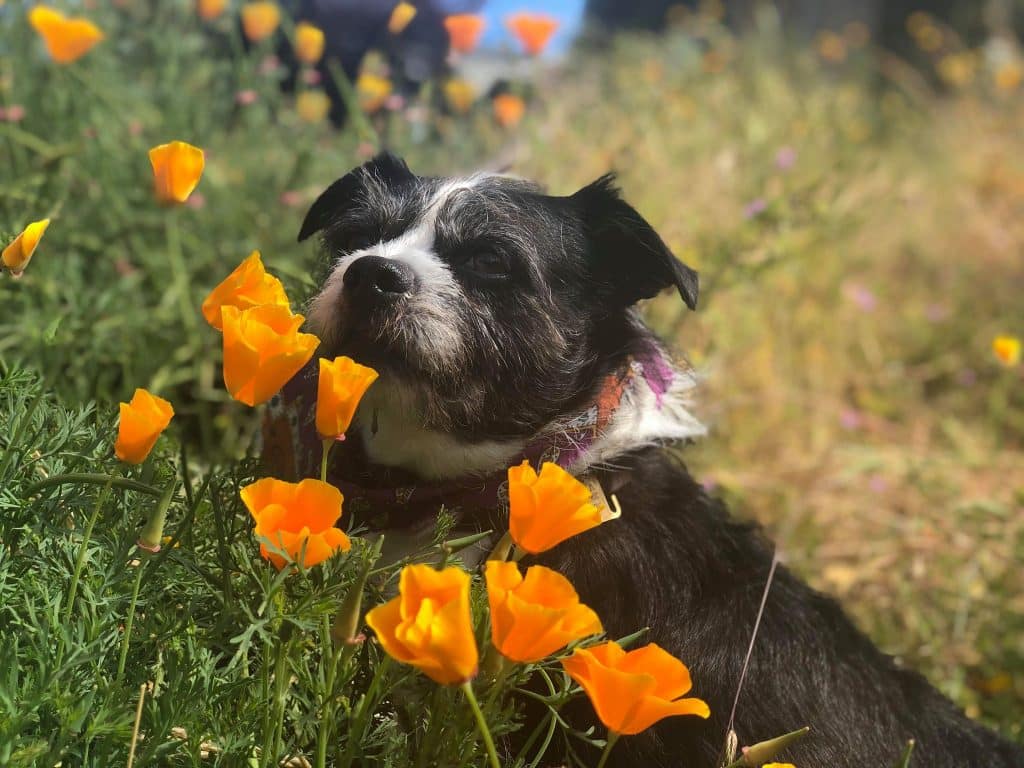 Carey gives her adorable dog Ollie (who’s so cute he has his own Instagram) CBD treats when it’s Fourth of July or on other occasions when he might be anxious. “As Oliver gets older, his anxiety seems to be getting worse,” Carey says. This includes separation anxiety as well as overreacting to loud noises.

“They seem to help take the edge off for him. Normally, when he’s having anxiety, he’ll pant a lot and pace, and these seem to reduce how much he does that without over-doping him like the prescription stuff I’ve tried does,” she says.

Oliver takes CBD Dog Biscuits from Austin and Kat, started by Kat to help alleviate her dog Brady’s aches and pains. The products on the site are all handmade.

Buy Now at Austin and Kat 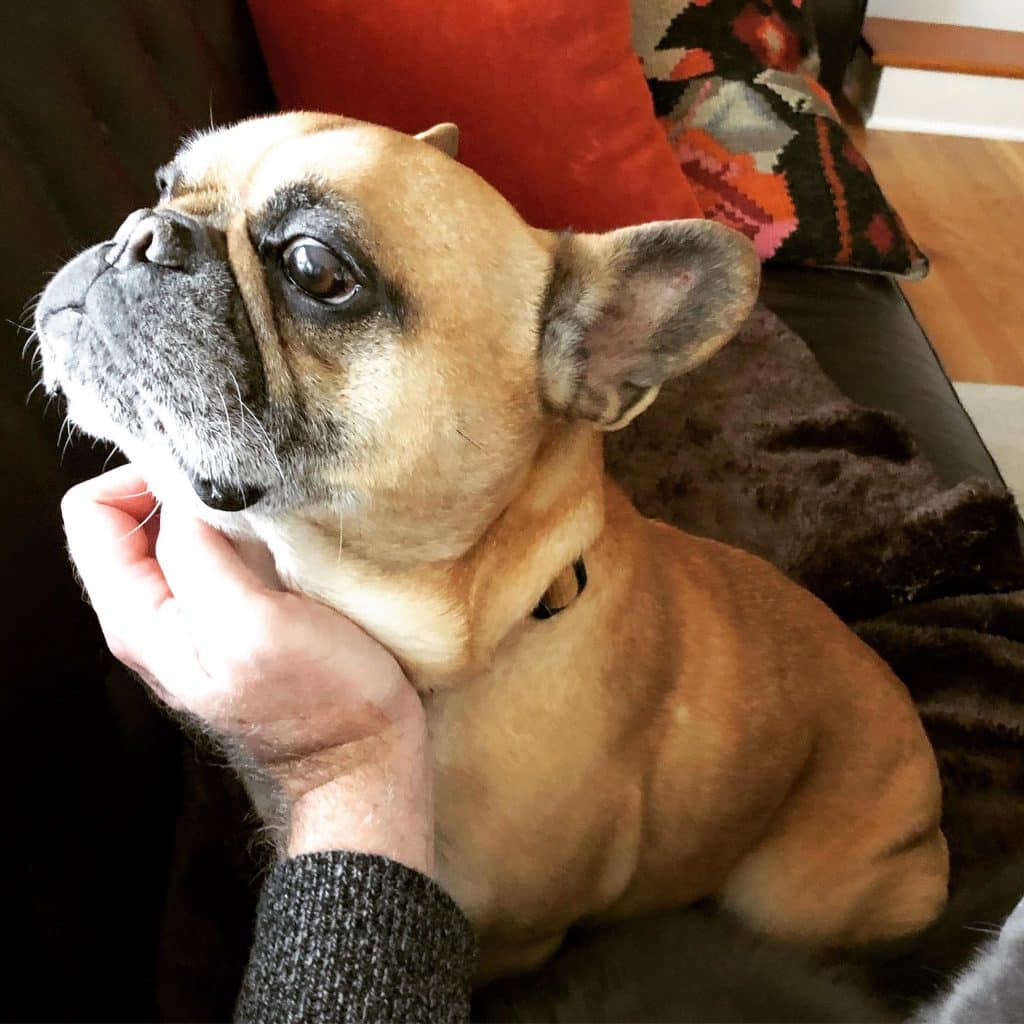 Jason likes using the two mg size and shied away from the tincture form as it “seemed to take too long” and could adjust the dose easier with a chewable treat. “We use it when we know we’re having a party or if Sumo’s back is bothering him. We’ve also used them before going to the vet. He sleeps more, which is the obvious sign that it’s working.”

Buy Now at Austin and Kat 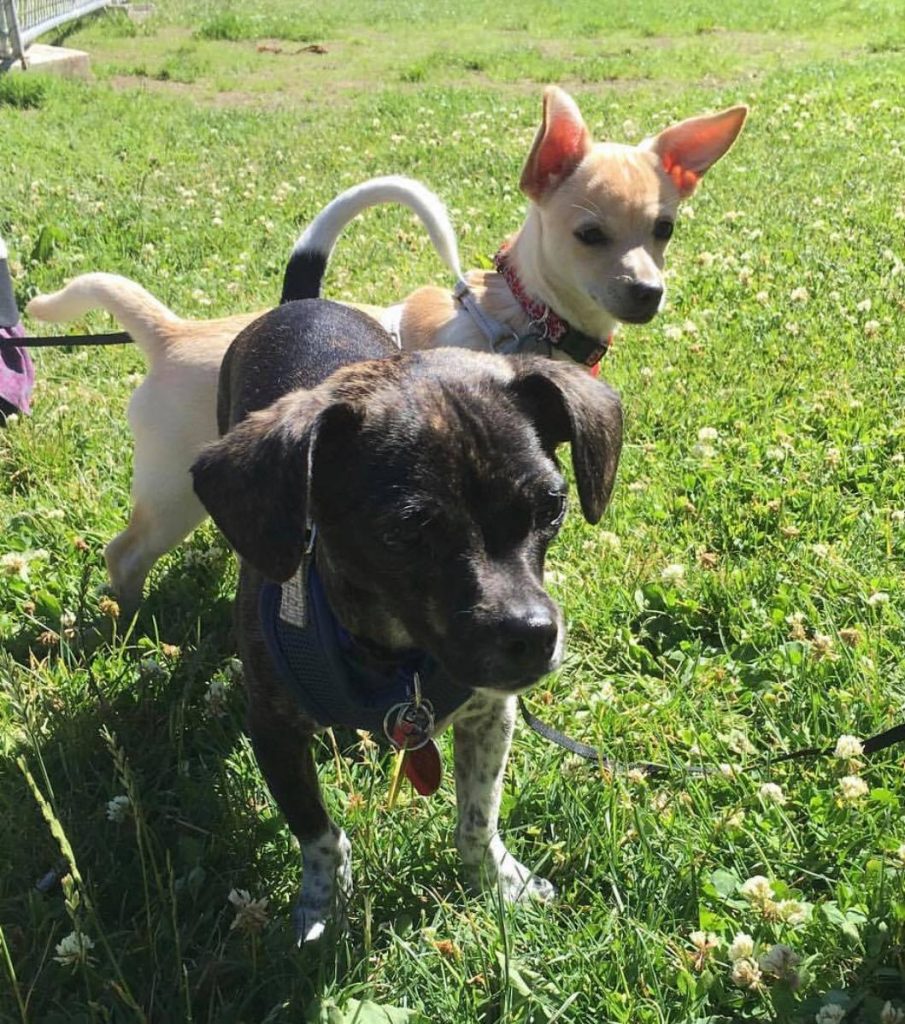 Another friend uses Wisely Extra High Potency Hemp CBD Oil for his dog, Rue, a rescue Chihuahua. Josh is skeptical of its benefits: “I’m not fully sold on the CBD thing, but it seems to chill her out a bit. She was a rescue and has pretty bad anxiety when anyone comes over.”

Josh says he puts two drops on a treat “and she gobbles it up. It has coconut oil in it so I think she likes the smell.” They give it to her an hour before people come over. His pup doesn’t seem to be noticeably drugged, but he says, “it definitely calms her down and she’s a bit more social.”

You can also opt for the jar of coconut oil infused with CBD, which can be used topically, as well as on food. (Again, dosing is key).

Buy Now from All the Best Pet Care

CBD Oil and CBD treats can also ease a dog’s pain and suffering. Another CBD oil convert, Laura, says of CBD oils, “I swear by them!”

Her 11-year-old boxer Emme, who recently passed, was suffering from arthritis of the spine and had lost control of the muscles in her back legs. Laura says that CBD allowed her to move around without as much pain. “She was super happy all the time as normal. Basically, she remained her happy self while on CBD.”

She uses Pet.releaf hemp oil which comes in several sizes (330 to 1700 mg) and price points. 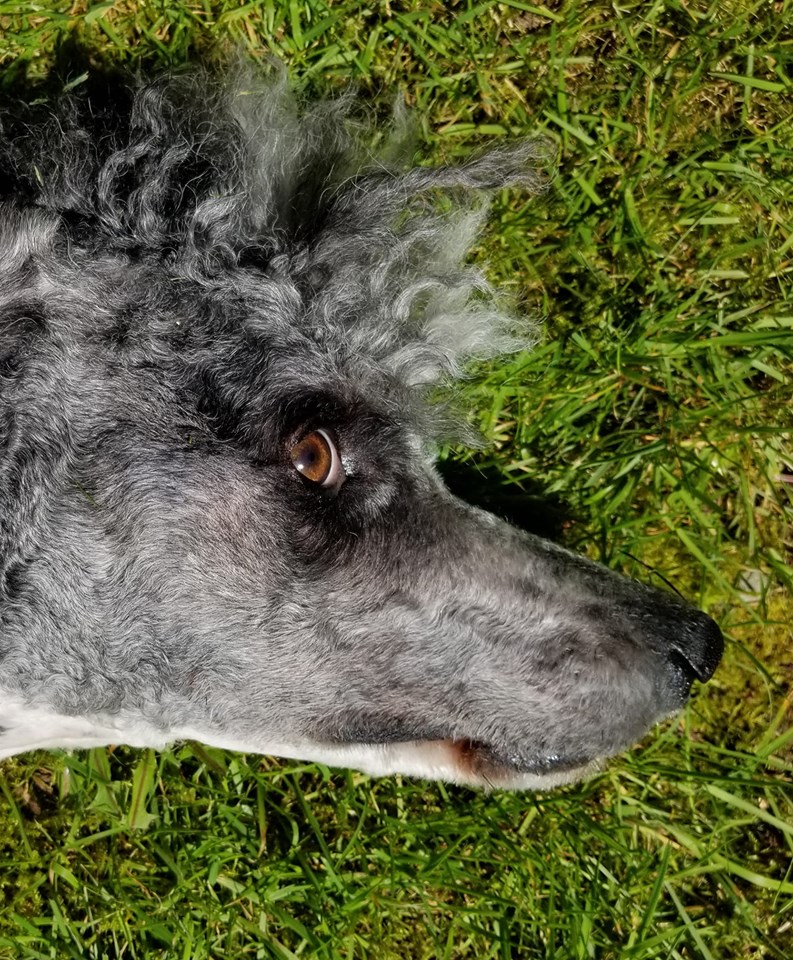 Post-surgery, Atticus needed soothing for his broken leg. He had two surgeries, and was still in a cast and needed to wear the dreaded cone. With the hope of keeping him calm his owner gave him some CBD oil—three drops in his food. “He hasn’t told me if he likes it but when I get home, it looks like he’s been napping, “ she writes. 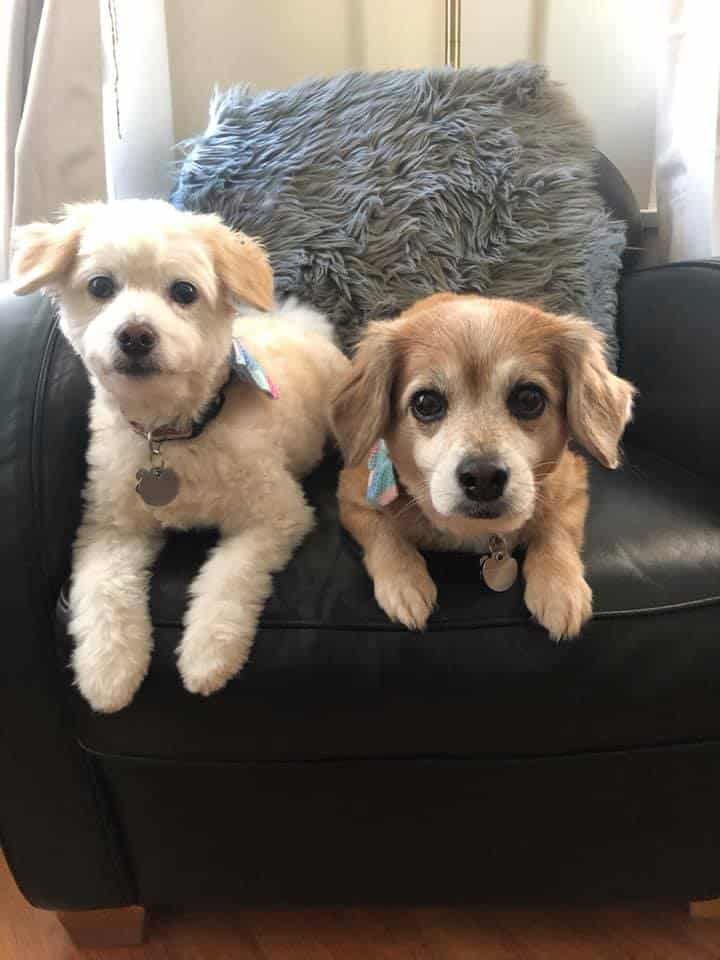 Nano and Falkor use CBD to calm their nerves

Celeste gives her Dachshund mixes Nano and Falkor 2 mg CBD treats before anxiety-inducing events like going to the vet, long drives, or before a trip to the groomer.

The 16-pound dogs have had prescriptions for Xanax, Valium, and have even tried Benadryl, but Celeste says that half of a 2 mg treat seems to work better for Falkor who is the more nervous of the two.

Other Recommended CBD Products for Dogs

There is a wide variety of CBD products out there. Beyond those mentioned in this guide, these companies offer well-reviewed products that are easily purchased online. 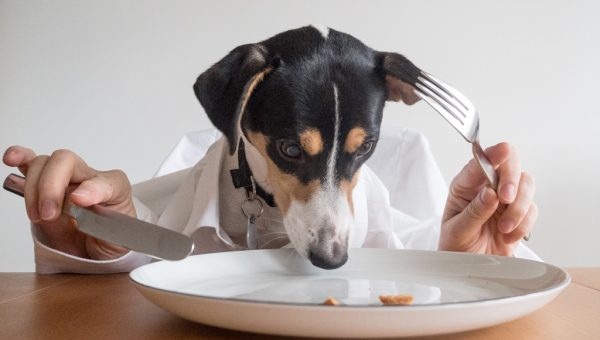