The most popular cat breeds in Canada are in! What breed is your cat? While most people may think of cats simply in terms of their looks—from tuxedos to tabbies—there’s actually a whole wide world of rare and popular cat breeds out there.

We wanted to learn more about our relationships to cats, common cat breeds, and how cats come into our lives, so we took a look at our database of Canadian pet owners on Rover.com. Here’s what we learned:

It’s all about personality

Colour and appearance are important to prospective cat owners, but looks aren’t everything. The top two most important qualities new cat parents look for in a cat are affection and playfulness.

While some people may find cats difficult to understand, their owners are usually quite charmed by their mysterious habits.

Our feline companions can be so perplexing and many cat parents wish they knew what their cats were thinking at all times!

We love learning about all things cat here at Rover, because we aren’t just dog people—we’re cat people too—and we’re fascinated by the sheer variety of unique cat breeds in the world, we decided to find out what the most popular cat breeds are in Canada. Read on to see which breeds made the list. 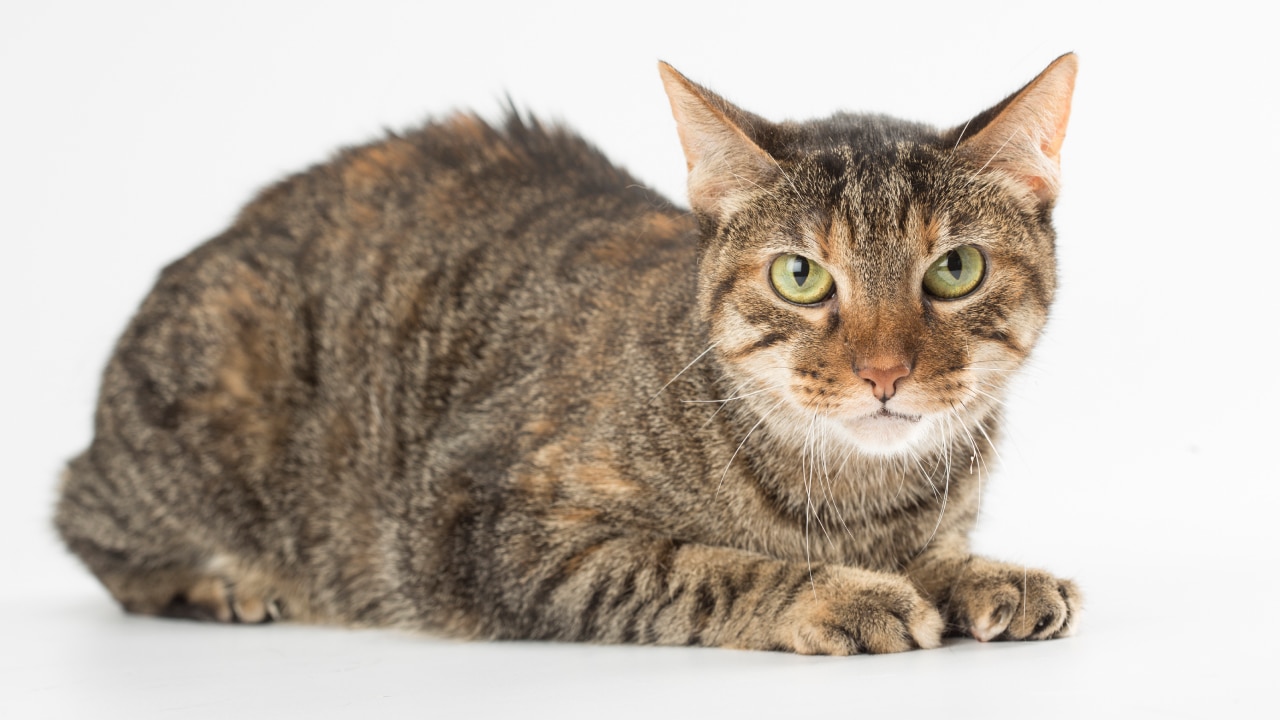 Not to be confused with the American Shorthair, the Domestic Shorthair is often considered to be the “mutt” of cat breeds due to their mixed and unknown heritages. Because of this, Domestic Shorthairs can present a variety of physical attributes, but they are generally medium sized with round faces, sleek and soft short coats, and can be any mix of colours.

It’s believed that after being domesticated in Egypt in around 2000 BC, cats like the Domestic Shorthair made their way around the globe, including to North America (likely aboard the Mayflower and other ships). These cats were favored as mousers, hunting rodents and other small pests, and considered to be hard working. Domestic Shorthair cats live an average of 12-14 years, but have been known to live much longer as well. 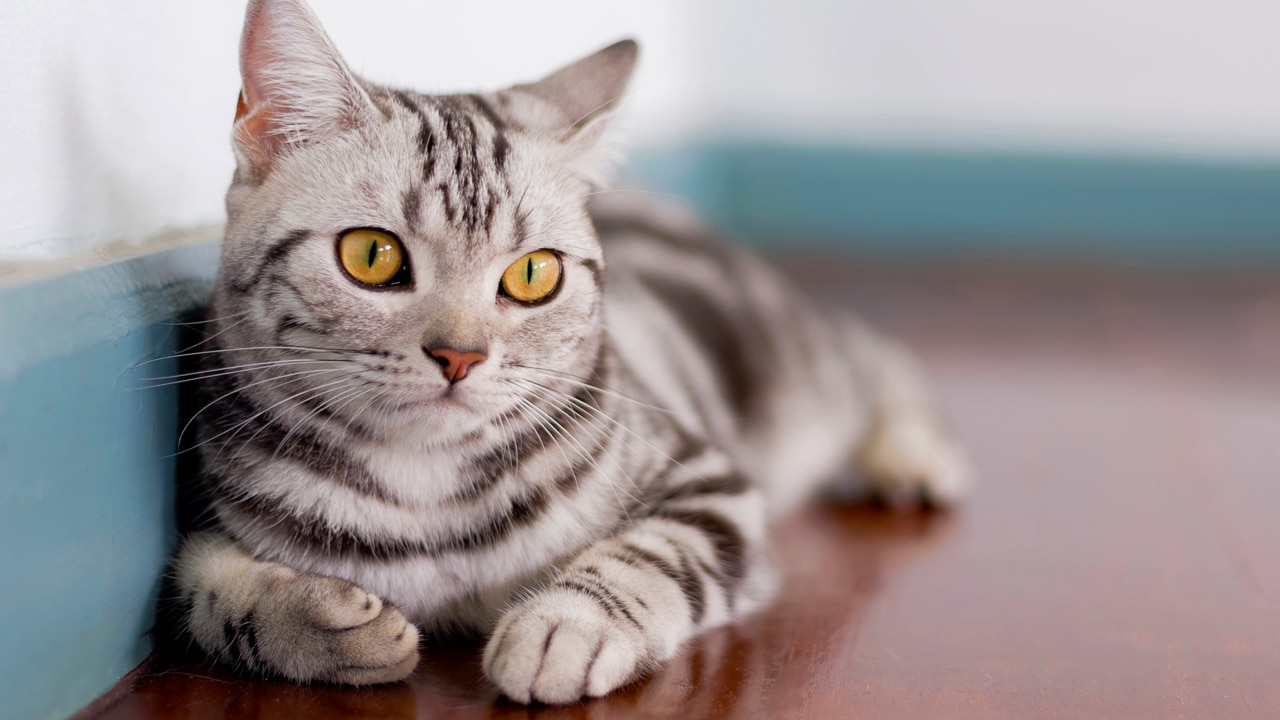 Though American Shorthair cats would love to snuggle up on a couch with you, they’re also known as working cats: hearty, muscular, and alert. They typically adapt well to humans and animals alike and are generally well-rounded in temperament.

All cat personalities are different, but an American Shorthair is likely to be sociable while still independent. These cats are selectively bred for specific traits that must meet the breed standard, unlike the Domestic Shorthair, which is a mix of unknown breeds.

Similar to the Domestic Shorthair, American Shorthair cats came to North America from Europe and were often used by pilgrims to keep the local rodent population under control. 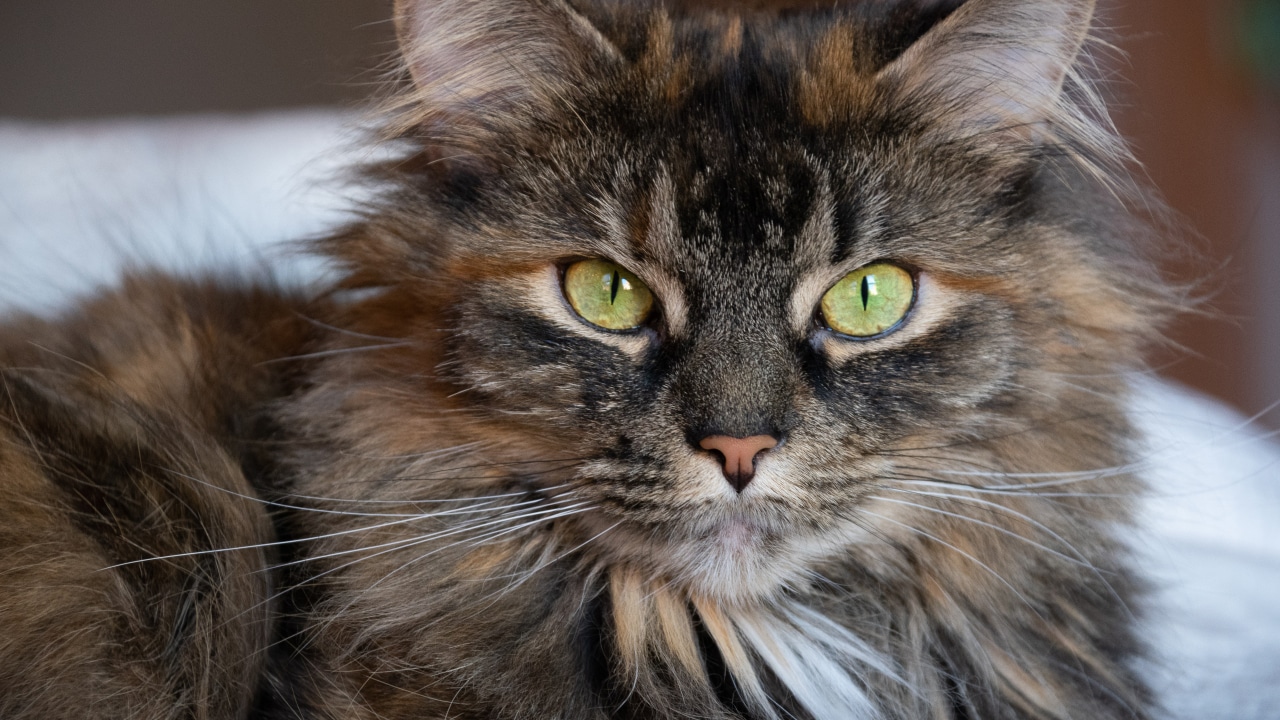 Like Domestic Shorthair cats, Domestic Longhair cats are simply cats that have long hair and are of unknown ancestry. They’re especially common for this reason—most cats aren’t purebreds! Also like their shorthaired friends, they were brought to North America from Europe via ships.

These cats come in a full spectrum of colours from orange to white and black to grey. Their coat is typically a few inches long, and they have distinct tufts around their ears and on the bottoms of their paws. Domestic Longhair cats benefit from regular grooming to help maintain their lovely coats.

Their exact history is a mystery, but some speculate that the recessive gene for long hair was pruned specifically by people with cats in colder climates like Russia, Iran, and Turkey. Domestic Longhair cats have a reputation for being great hunters, making them particularly attractive to humans looking for help controlling rodents. 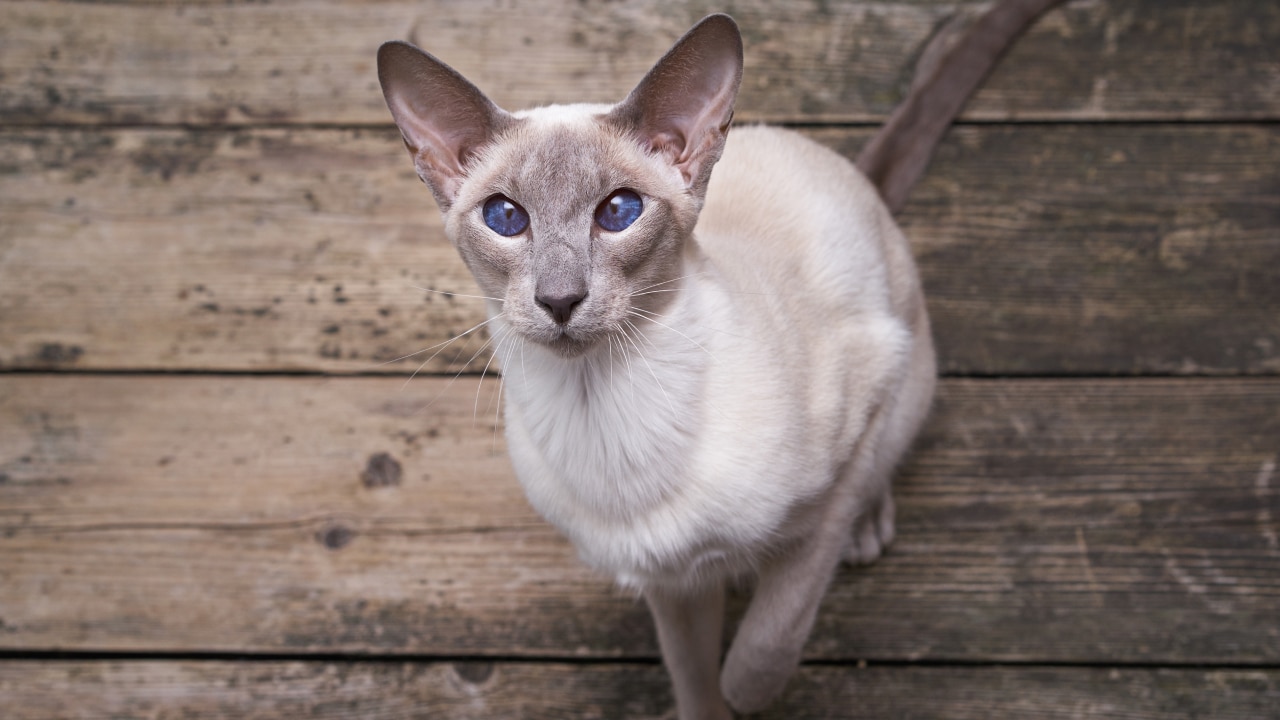 Perhaps one of the most distinctive breeds, Siamese cats are most often cream coloured, with grey-brown paws and icy blue eyes. Everything about Siamese is a bit pointier than other breeds, from the large, triangular ears to their delicate paws. They’ll often have the same grey-brown colouring on their ears and face. Siamese cats are now bred to come in different colours and patterns.

Their personalities are often busy and talkative, making them excellent companions for equally active people. They prefer to not be left alone for long periods and may need more play time than your average cat. Siamese cats are also known for being highly intelligent.

Siamese get their name from their origin country: Thailand. Before Thailand was renamed in 1939, the country was called Siam. Siamese cats eventually made their way to Europe, most notably in the late 1800s, and later to North America, where Rutherford B. Hayes had a Siamese cat during his presidency, from 1877-1881. 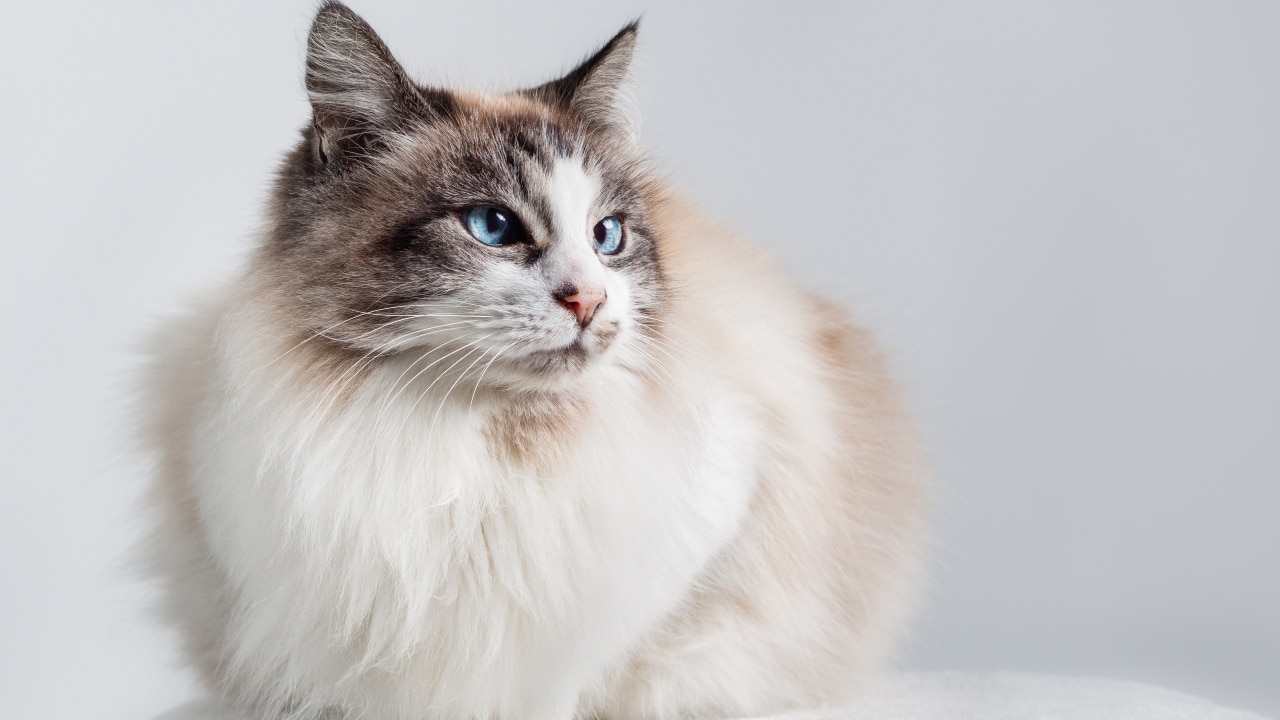 Large and fluffy, Ragdoll cats are a pointed breed. Cats of pointed breeds have lighter-coloured bodies with a darker face, legs, tail, and ears. While their colouring can vary slightly, their blue eyes are distinctive.

One of the more affectionate breeds, Ragdolls will often follow their humans around, greet them at the door and hope for a spot in bed. They’re known for being easy-going and not excessively active.

Ragdolls were largely free-roaming cats until in the 1960s, when Ann Baker, a breeder in California, developed what we know to be today’s Ragdolls. 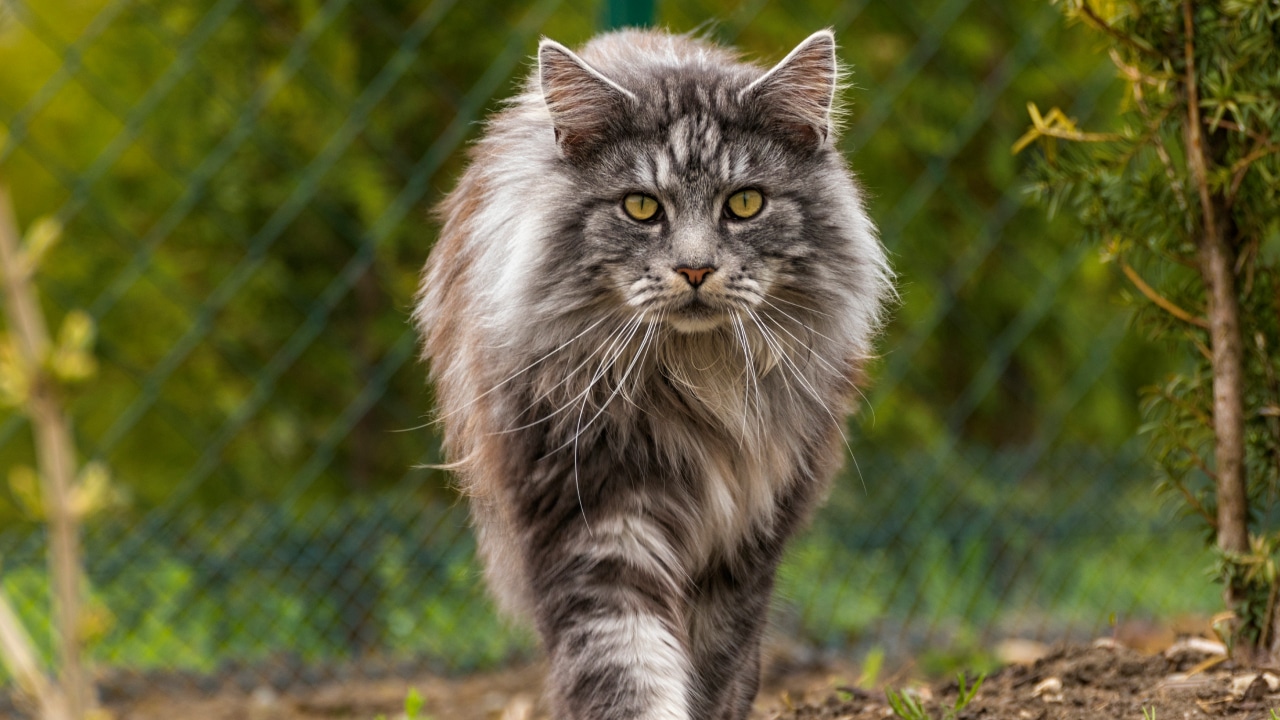 When it comes to personality, these cats toe a line of wanting to be near their humans and needing their own space. They have a reputation for being undeniably attentive and may follow family members around, but like many cats, they can be cautious around new people. Unlike most other cat breeds though, Maine Coons have a dense, water-resistant coat—they may enjoy a water fountain or even playing in water!

Maine Coons are believed to be native to North America, having been put on the map during the colonial era. Some even tell a tale of Marie Antoinette having several Maine Coon-like cats, which were first brought to the continent during an expedition to save the queen from beheading. The cats made it, but she didn’t. Whether or not this story is true, Maine Coons rose to popularity for their attentive, yet rugged, personalities.

With the introduction of Persian cats and other long-haired breeds to North America, the Maine Coon was incorrectly declared extinct in the 1950s. Since then, Maine Coons have clawed their way back to the top, becoming the sixth most popular cat breed in Canada. 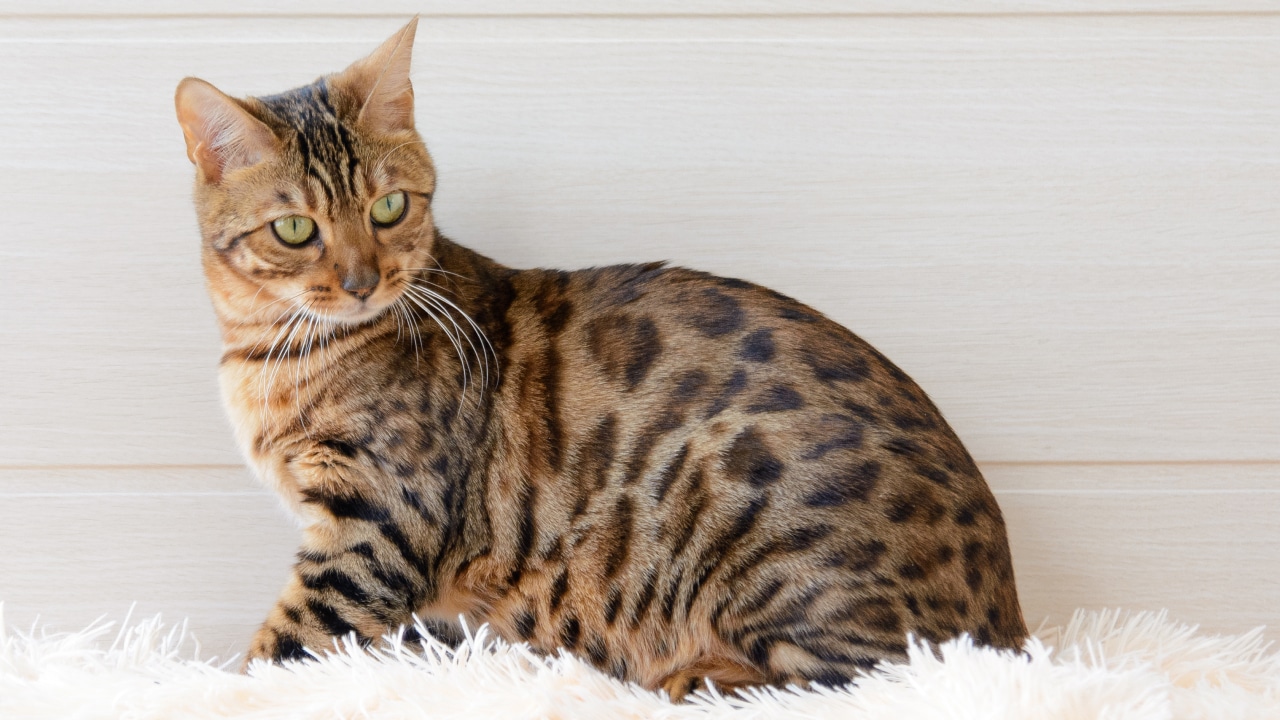 A Bengal’s marbled coat is their most distinctive feature, but it’s also impossibly soft and possesses a muscular physique. Though all cats within the breed have different personalities, Bengals are generally active and playful in a kitten-like way, even at an older age. They need pet parents who are willing to keep them busy and entertained, and who are tolerant of a cat who may need a more stimulating, enriched home to thrive.

This is because Bengals are actually considered to be a hybrid species, having been bred with non-domesticated animals. The Bengal cat breed can be traced back to Jean S. Mill, who bred a domestic cat with an Asian Leopard Cat to get a cat with a mild, affectionate temperament with the show-stopping look of a leopard. According to The Cat Fanciers’ Association, “The Bengal is the only domestic cat breed that can have rosettes like the markings on leopards, jaguars, and ocelots.” 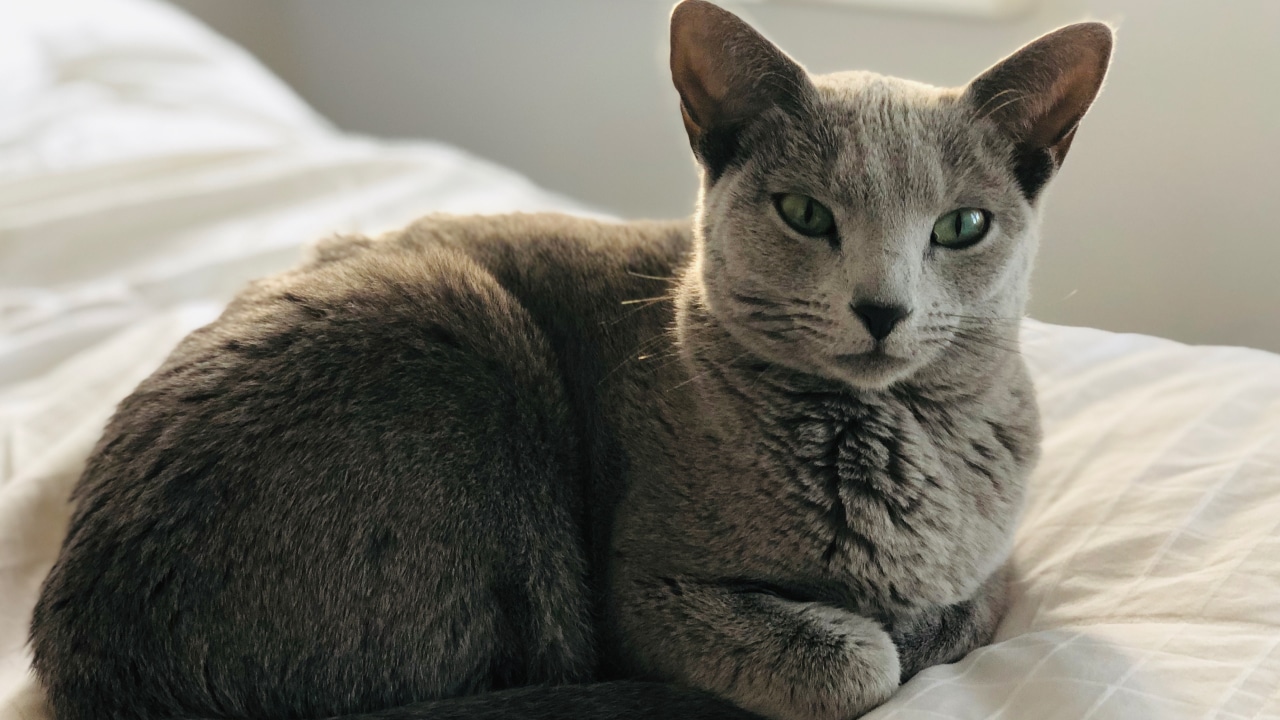 Russian Blue cats have short, soft coats in variations of dark grey and silver. They might show faint stripes but are otherwise patternless. Russian Blues have double coats, adding a plush look to their otherwise more delicate frames. They often have yellow-green eyes and a distinct “smile” on their face.

Russian Blues are often described as mostly quiet and will find a cozy place to sleep but are social with their family. They may be the type to hide away during large gatherings of other people.

Cat origin stories are heavily rumored, but some believe the Russian Blue descended from cats kept by Russian Czars. Eventually, these cats were imported to North America in the early 1900s, slowly gaining popularity over time to sit as the ninth most popular cat breed in America today. 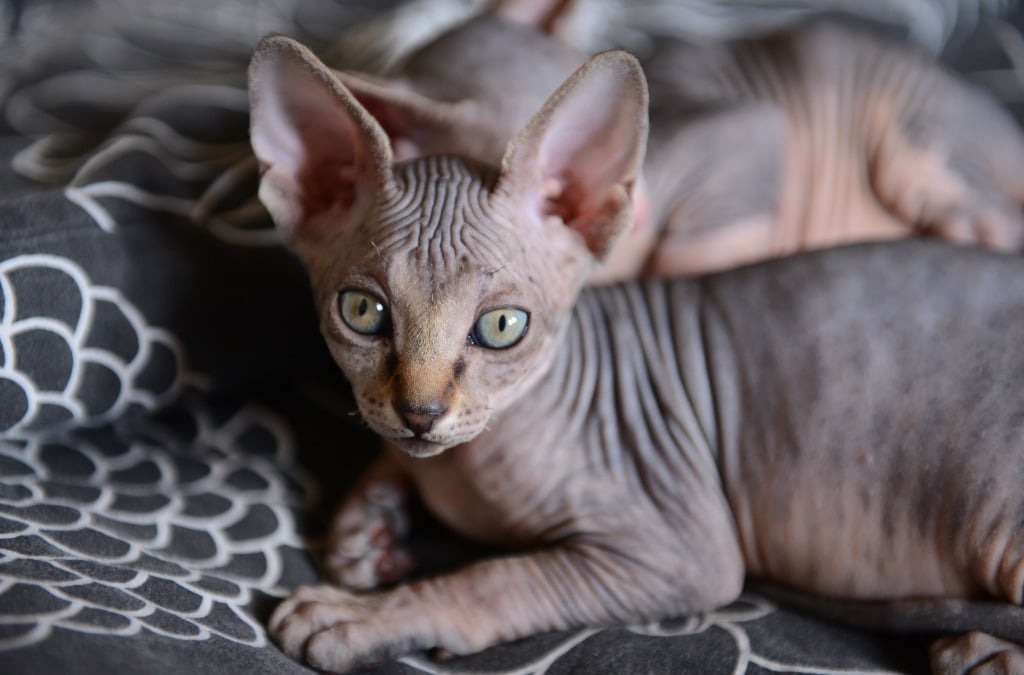 The striking appearance of a Sphynx cat makes the breed stand out from the rest, most notably, for their hairlessness. While their bodies are medium in size, they can weigh as much or more than a cat with fur. Their skin is smooth and soft, but you might often see this breed in a sweater to help keep them warm.

The charming personality of a Sphynx is almost dog-like. They’re often described as loyal to their owners, and are known for being outgoing. We’ve seen their popularity grow among the Rover community, possibly as a result of more people craving a close connection while in isolation over the last year. 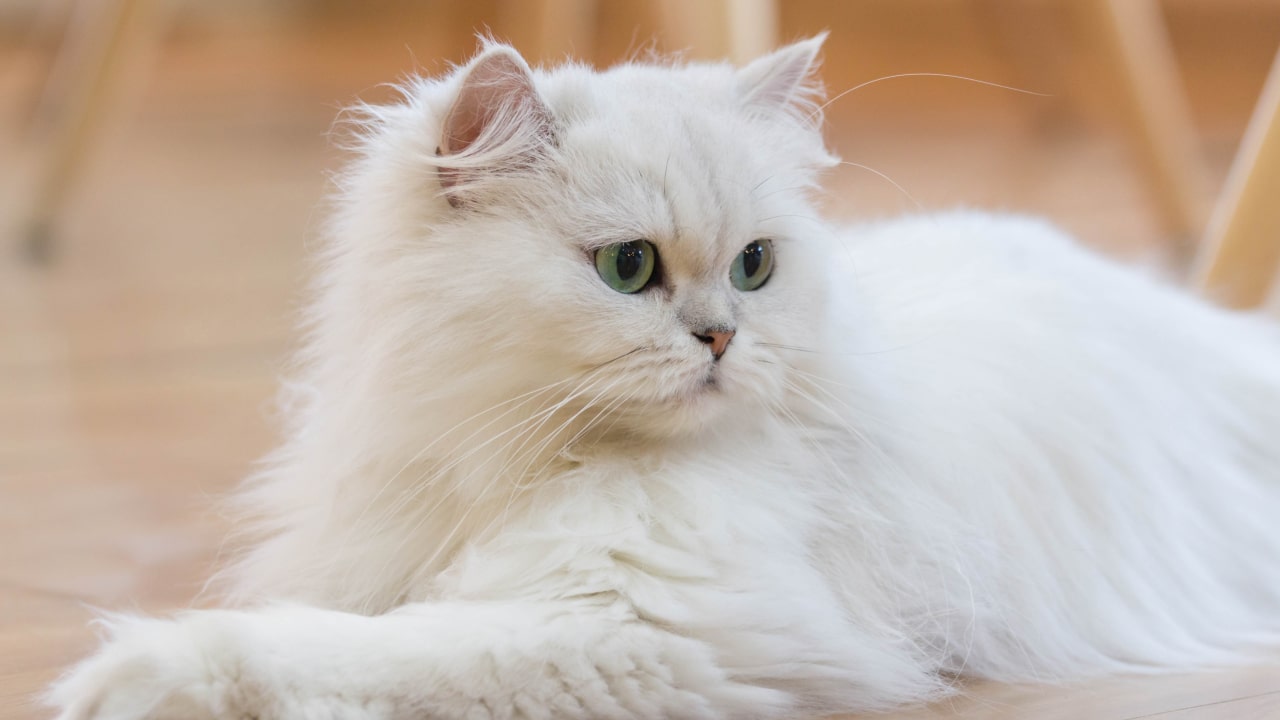 Persian cats have stocky bodies with flat, slightly scrunched looking faces. This is one of the qualities people are often so drawn to, but it can lead to the need for additional medical care. They sport long, soft coats that range in a variety of colours, including white and black. Though they share some physical characteristics with Maine Coons, they’re often smaller and range between 7-12 pounds.

Despite being sweet with their humans, Persian cats have a reputation for being slightly standoffish with new people and are considered generally less likely than other breeds to demand attention. They can be laid back and mellow relative to other breeds.

The Persian is one of the oldest-known breeds and was first spotted in Iran, known at the time as Persia. The breed made its debut to a wider audience in the 1871 Crystal Palace cat show and is also known as having been a favorite of Queen Victoria’s. 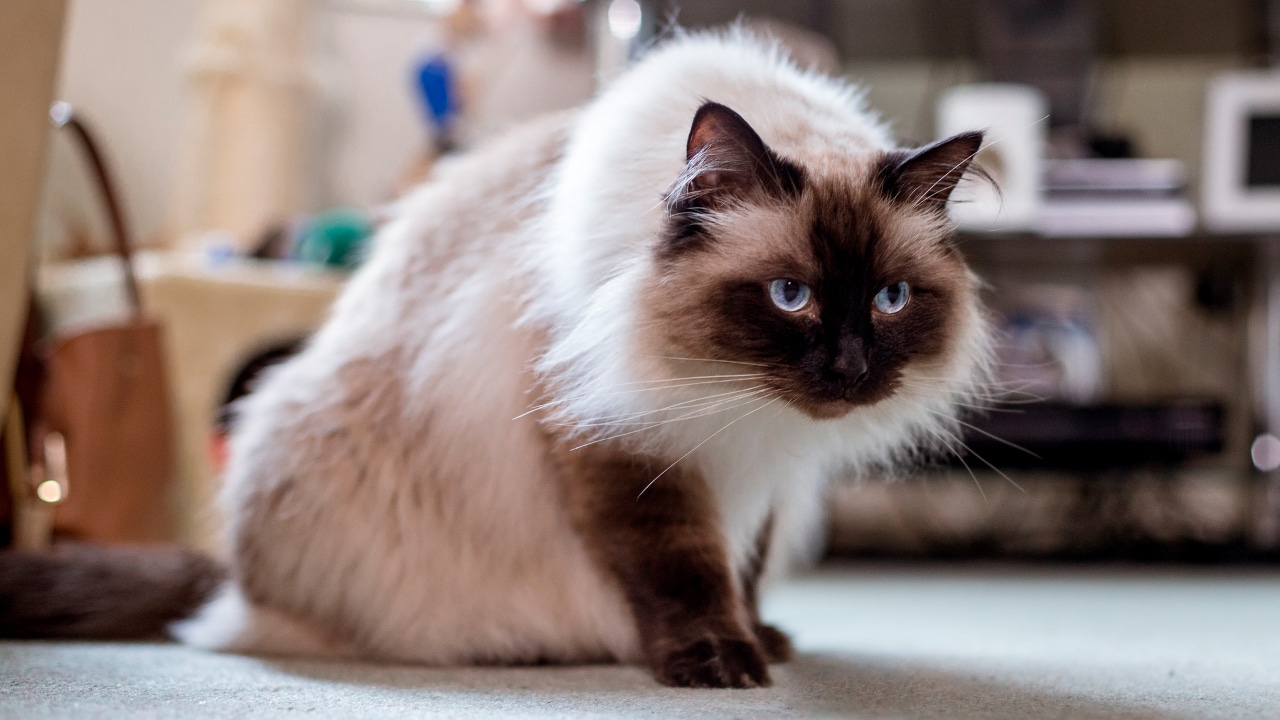 Himalayan cats are medium in size with sturdy bones and plenty of fur, often making them look bigger than they are. They’re known for their lush, long coats and require daily brushing to keep it from tangling.

Himalayans have short, thick legs, small ears, and short tails. They have relatively flat faces with big round eyes. Though all cats have different personalities, Himalayan cats are generally known for their kitten-like, friendly personalities. They will likely get along with strangers and be equally pleased to either play or sleep in their humans’ bed.

This beautiful breed is a result of people wanting a Persian cat with the pattern of a Siamese. The first Himalayan was bred in North America in the 1930s and eventually gained popularity in England as well.

Cats only purr when they are happy: Not true!

Cats can’t be trained: Actually, they can!

Cats can see in the dark: Not true! 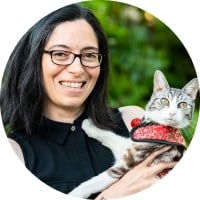 Dr. Mikel Maria Delgado is a Certified Applied Animal Behaviourist and Certified Cat Behaviour Consultant who has been working with cats for over 20 years. She offers cat behavior consulting through Feline Minds and is currently the Standards & Research Lead at Good Dog. She completed her PhD at the University of California, Berkeley, and was a postdoctoral researcher at the School of Veterinary Medicine at the University of California, Davis where she researched the health and behaviour of orphaned neonatal kittens and cats in multi-cat households. Mikel is co-author with Jackson Galaxy of the 2017 book “Total Cat Mojo,” and has published her research in several academic journals. Mikel is a Certified Applied Animal Behaviourist (Animal Behaviour Society), a Certified Cat Behavior Consultant (International Association of Animal Behaviour Consultants), and an Affiliate Member of the American Veterinary Society of Animal Behaviour. She now lives in Sacramento, California with her boyfriend Scott (a cat-loving CPA) and their three rescue cats.