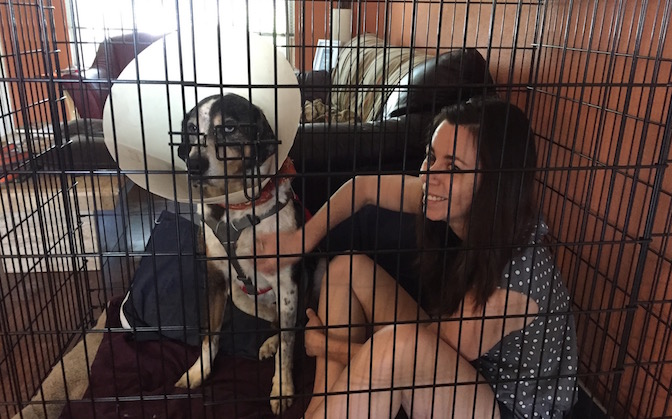 Here I am with Henry, the Best Dog in the Universe. His favorite thing in life, his whole reason for living (besides bringing supreme joy to all those he meets) is running off-leash through a wilderness where he can chase deer and sniff all the smells. 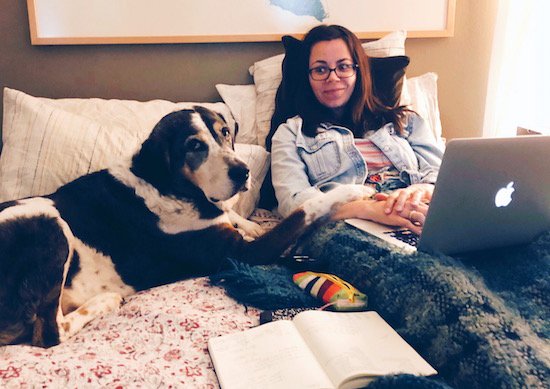 The year he turned eight, we noticed Henry limping after a few glorious runs, but he typically recovered after a few days, and we chalked up it up to stiffness and soreness. Until, one day, we realized his gimpy gait was not improving.

Our vet told us Henry had partially torn his ACL and would require TPLO (Tibial-Plateau-Leveling Osteotomy) surgery, in which a human doctor would cut open our dog’s leg, then cut through Dear Sweet Perfect Henry’s tibia (with a saw!) and reattach the bone with a plate, creating a new joint that doesn’t even need an ACL. (This website offers a more thorough and scientific explanation, though it interestingly glosses over the bone-sawing detail.)

Our vet looks like Julianne Moore, and several years ago she walked us gently through a very sad dog passing, so we totally trust her. And yet, hearing this news of what Henry might be in for, we launched immediately into the seven stages of grief:

Shock & Denial: He’ll get better if we give him time. Maybe this can heal on its own. Hey, everyone on Facebook, has this happened to you? How did you tell your vet to shove it when they gave you the news?

Pain & Guilt: HENRY?! [Teary eyes.] Running is his truest love, his greatest joy. What if we let him run TOO much? Maybe he should have been running on softer surfaces! What have we done to him?!

We must give Henry the bionic leg he deserves. And all the peanut butter he wants forever.

Anger & Bargaining: Who the $%&# does that vet think she is, telling us they can cut open our dog and walk away with large chunks of our savings?

Depression, Reflection, Loneliness: Well, he’s not getting better. What if he never runs again? What if he loses his true purpose in life? What if they destroy our dog? What if our dog is mortal?!?! [Uncontrollable weeping.]

The Upward Turn, followed by Reconstruction & Working Through, followed by Acceptance & Hope: They say he’s going to run again. Some of those Facebook comments were actually helpful and reassuring… Their dogs rebounded, and people we know say they made a great decision. And, admittedly, Julianne Moore is an angel visiting earth in the form of a veterinarian. We can do this. We must give Henry the bionic leg he deserves. And all the peanut butter he wants forever.

Within about a week or two, we settled on a surgical veterinary outfit (endorsed by our Julianne Moore) that was not board-certified (and therefore $2,000 cheaper), but had performed many successful TPLO surgeries, and boasted a strong, friendly reputation. They could also perform the surgery at a price we could swallow. 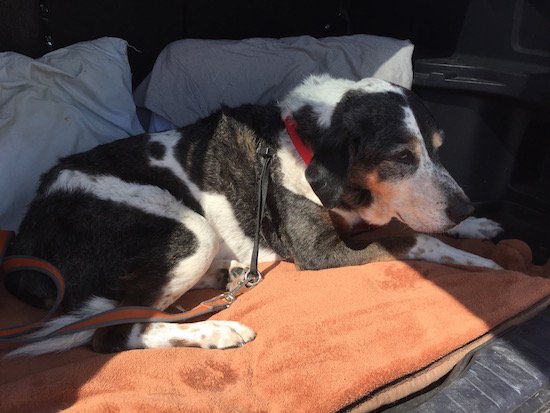 I was deeply concerned about how we could possibly manage an 85-pound dog with only three working limbs and lots of pain meds coursing through his veins. Could we help him get up, go to the bathroom? What if he stepped on his leg weird and messed up the repair? What if he licked at his sutures in the fleeting moment his cone came off for bathroom time? What if we couldn’t get the meds down?

We knew we had to get this right, so we bought the suggested supplies (mainly a harness to help lift him from the top). We read every word on the handouts the vet gave us. We watched all the YouTube videos about getting your dog to swallow pills, getting your dog in and out of the crate safely, helping your dog outside to potty, making sure our second dog (who is also a fantastic dog in the universe) was safely out of the way when Henry came out of the crate to conduct his business.

The care sheet we took home after surgery & our first attempts to prepare for nursing duty.

We designed a methodical system for managing Henry’s medications—antibiotics, pain meds, anti-inflammatories. First, a spreadsheet, and later a series of little cups filled with the proper pills and labeled with the appropriate time of day. Luckily, Henry’s dad and I have opposite work schedules, so one of us was usually home. But we needed this system to make sure we both knew where Henry was in his med cycle.

The first few weeks were rough. It’s difficult to see your dog in pain, and it’s worrisome to think you’re on the verge of doing something terribly wrong. Henry looked confused and betrayed: Why did you do this to me?! I thought you loved me! 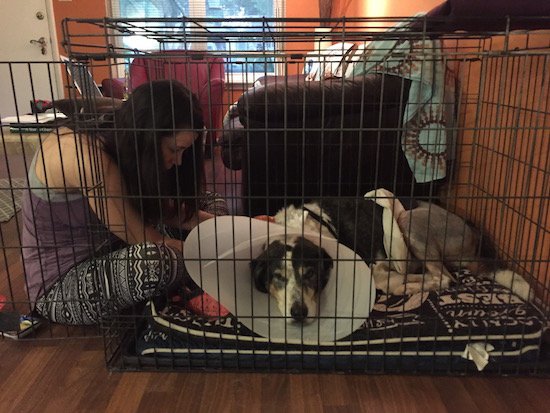 A few days in, we had to buy Henry a giant crate—a veritable dog condominium in the middle of our living room—so he could turn around while wearing the Cone of Shame. But at least I could climb inside to give him a little comfort and help him feel less isolated.

Henry proved himself an awesome patient. He quickly learned the routine, and perhaps the worst part was hearing him cry at night because he had to stay in his crate instead of sleeping at the foot of the bed.

But we stuck with the protocol. Soon, Henry could take short, three-legged rehab walks in front of the house, then down the street, putting weight on his healing knee. We also felt well supported by the new medical arm of the Henry Fan Club. Our vets included in their pricing a series of follow-up visits, drug refills, X-ray checks, and phone consults, even during off-hours. 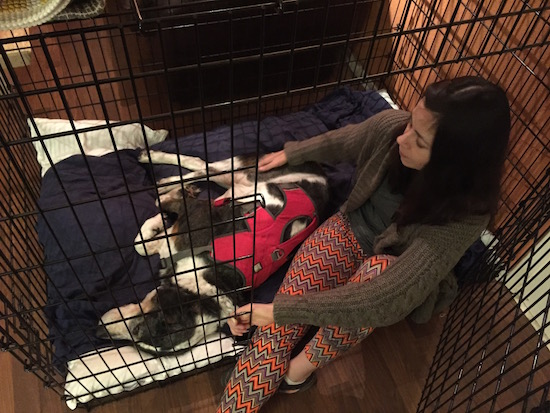 It took a full 100 days for Henry to get fully back on his feet. The first month or two of recovery requires 24-hour crate time, except for bathroom breaks. But in the third month, Henry was able to live outside the crate—if someone was home to supervise—but no jumping, running, hopping on furniture. Gradually, his freedom increased.

It took a full 100 days for Henry to get fully back on his feet.

Unfortunately, around Day 115, Henry tore the ACL in his other leg and went through this whole rigamarole a second time. His initial days during Round 2 were a bit tougher—he kept wetting the bed in his crate, which made his harness wet, except we couldn’t remove the harness, and one human had to rush to change bedding while Henry was out for a pee with the other human. And then it would happen again.

We believe these were protest pees, Henry’s way of saying, Are you #@$%ing kidding me?! AGAIN?! I trusted you!!! Am I not THE BEST DOG IN THE UNIVERSE?!

We went through several discount beds in the first ten days or so. But Henry stabilized shortly afterward, and his recovery continued and we were, by that point, total pros. 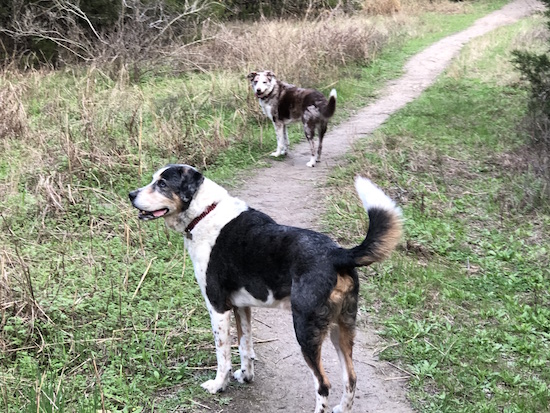 Henry back on his feet and supremely happy

Today, he remains the Best Dog in the Universe with two bionic legs. Given his age, we’re cautious about letting him run freely off-leash for long walks as he used to, primarily because we worry he’ll see a deer, start sprinting, and then come home limpy again. But we do let him free to run here and there.

What to Do if Your Dog Tears Their ACL

Now, if someone poses that same desperate question on Facebook, I would say this.

The TPLO procedure was viewed as radical when it was introduced nearly twenty years ago, but today it’s widely accepted as the sanest approach to treating a dog with a torn ACL. In Henry’s case—and for many other dogs—it was worth the time, effort, money, and painstaking care. Because now the Best Dog in the Universe can do the thing he loves the very most. May he live long (FOREVER) and prosper!