“If we ever get divorced, you get custody of the dog,” I used to joke. It was not a hilarious joke, but it was “funny because it’s true.” Our dog, McEnroe, was our first act of marital compromise. I wanted a dog more than anything, so we adopted a medium-sized, energetic dog who loved children, catching Frisbees, and tennis balls. I am awkward around children, and can’t throw any type of sporting good very far, even with the assistance of a launcher, so my husband quickly won Mac’s favor. 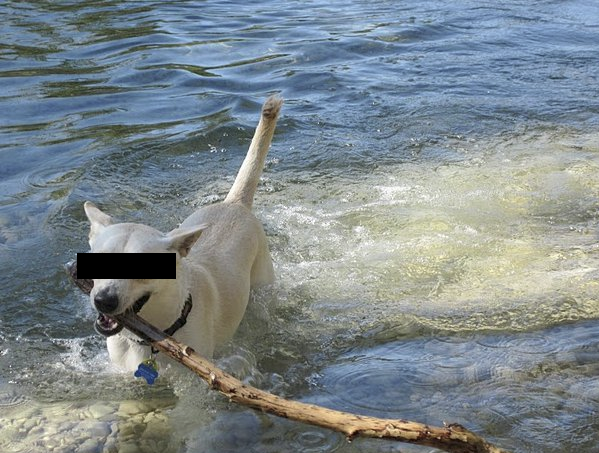 Miss you, Mac, but this story isn’t about you.

Our dog, McEnroe, was our first act of marital compromise.

Two years later, when we separated, Mac stayed on the team with the strongest player. And why wouldn’t he prefer my husband? I didn’t even like me very much. When I should have been plotting a Mrs. Doubtfire (use an array of prosthetics to disguise myself as a kindly old dog sitter to spend time with my fur child, then throw a lime at Pierce Brosnan’s head), I just got drunk instead. The fun of being on my own and going out without worrying about someone else’s dinner and exercise got old after about 10 days.

The fun of being on my own and going out without worrying about someone else’s dinner and exercise got old after about 10 days.

I worked at the local newspaper at the time and every week we featured the Humane Society’s adoptable pets alongside the classifieds. I quietly looked for a place to rent, while we audibly remarked on the cuteness of all the adoptable pets. A pair of Chihuahua mixes, Max and Lillie, had been in the paper for about a month. Then one week, Max’s sister had been adopted. Without doing all the planning, preparations, and considerations one really should do before they adopt, I went to the shelter. Bad wives need love, too.

I wanted one being in my life who didn’t think I was a monster. 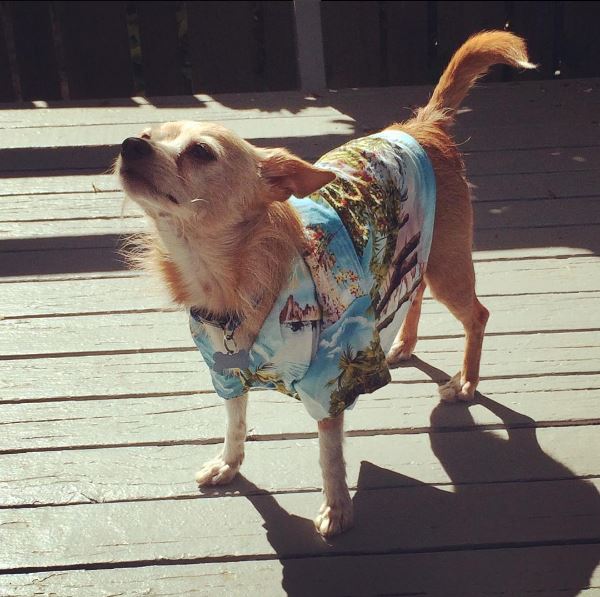 If you like piña coladas, getting caught in the rain…

I wanted one being in my life who didn’t think I was a monster. There aren’t a lot of Edible Arrangements sent to women who choose to leave their perfectly nice husbands. Dogs, in my experience, don’t typically consult popular opinion before they make their minds up about you.

And I wanted a little dog. I heard that according to ancient folklore, Chihuahuas are their owner’s guides into Heaven, and that’s why they are so fiercely loyal. The idea of being someone’s Person, and getting some credits toward a positive afterlife, appealed to me. 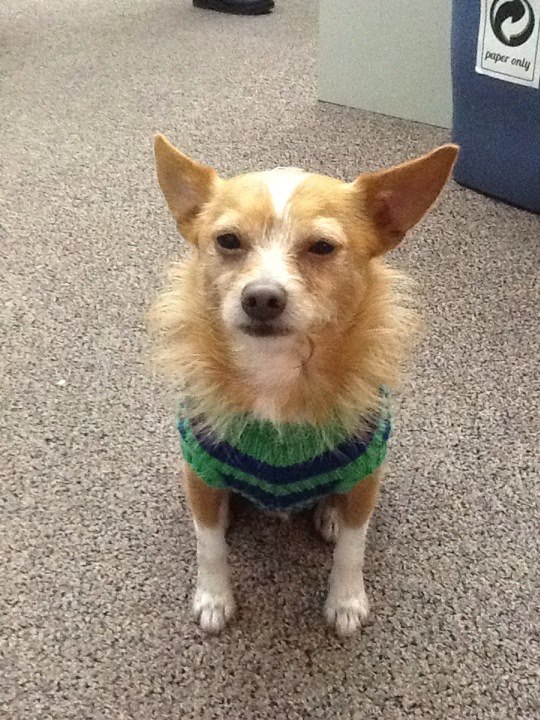 When the volunteer at the shelter brought Max out, he was jumping with excitement at the prospect of a walk. He was getting two, sometimes three feet of air. When I took the leash, he stopped jumping. He looked at me and I thought he must know what a fraud I was. Once we were about 10 feet away from the shelter doors, he dug his heels in. Who was I to take him away from the shelter, which he clearly loved?

Over the course of our short marriage, my husband and I moved three times. The first move, from Chicago to Seattle, was the most contentious. Everyone accused me of uprooting him, taking him away from his friends and support system in a city we’d both loved, to drag him along on my whims. I was King Kong climbing the Empire State Building with a new husband in my monster paw.

The shelter volunteer offered to walk Max with me. 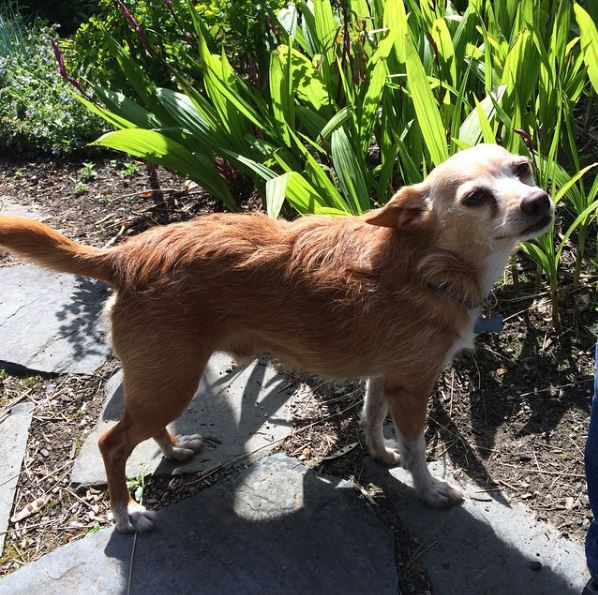 “We can go to this field. Sometimes we like to go out here and just sit for a while. He likes it because he saw a snake out here once,” she told me. God, I really am terrible, I thought. He may never experience the anticipation of seeing a snake again if I adopt him! Or worse, he would know what a snake I was.

As I was making the decision whether or not to adopt him, another volunteer asked if I wanted to know how he and his sister were found.

“It’s pretty upsetting,” she admitted. After failing to sell them on Craigslist, their owner(s) had left them locked in a crate in the woods, without food or water. What kind of monsters would do that? I wondered. I decided to adopt Max. Maybe he could find a way to love me. After all, I’d left my husband with a house and plenty of food and water. 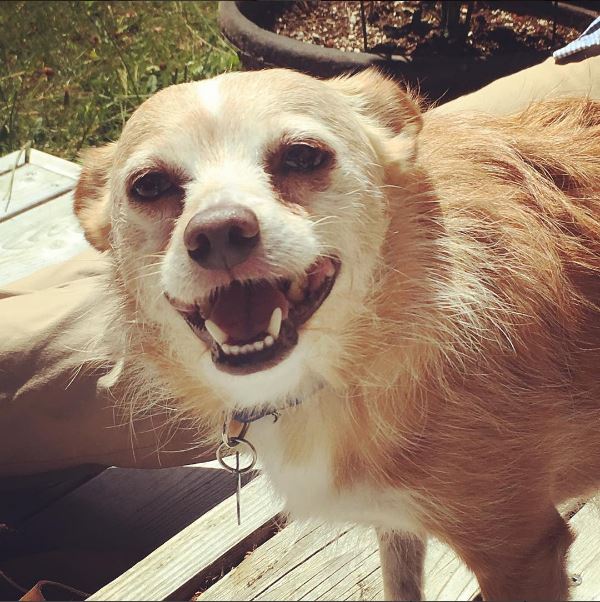 When I took him home, the first order of business was to change his name. Max and Mac were too similar, plus I’d had a grandmother who named her Schnauzer Max and that dog was almost certainly spawned from Satan himself. I named him Edison, because he looked like a little inventor who had been playing with circuitry. Eddie for short. 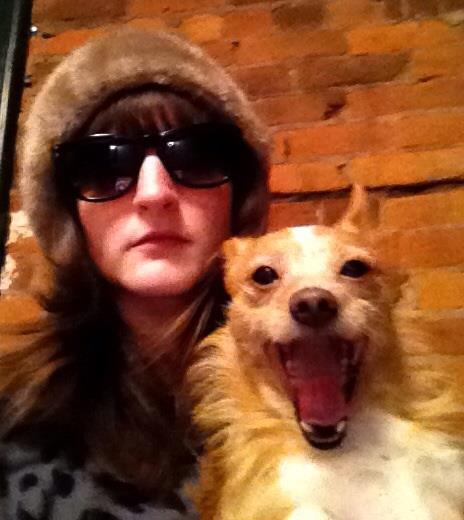 Our love was electric.

For the first two weeks, we did a lot of staring at each other, each of us unsure. First, Eddie figured out that I was the person who would feed him. Then he and I started to enjoy our walks. Then he started jumping for me. Then we realized we really liked each other. 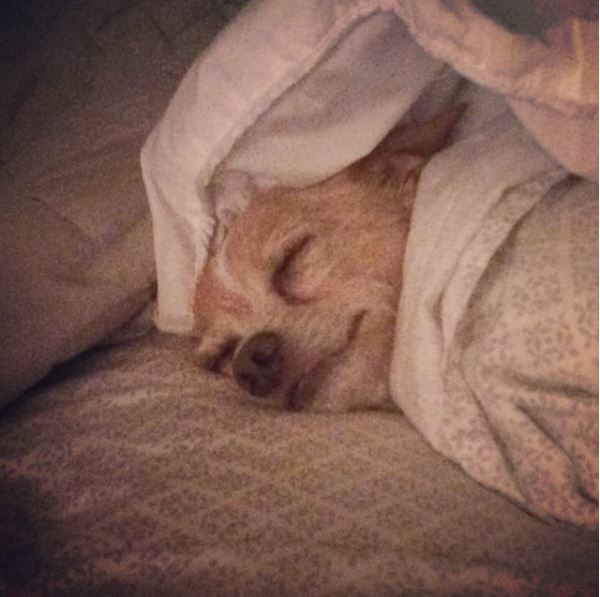 And I guess it was no time at all before we shared a love so pure, it could make even the smartest dog forget about that one time he saw a snake. Monsters deserve love, too.

It only took Eddie a few weeks to love me, because dogs don’t really think about it. They don’t hold grudges, and they don’t experience guilt in the same way.

Sun’s out, guns out.

It only took Eddie a few weeks to love me, because dogs don’t really think about it. They don’t hold grudges, and they don’t experience guilt in the same way. Eddie has been there for me through several attempts at relationships, and a lot of tears. I want to believe he can tell the difference between me crying about a boy, and me crying about the kids just living their dreams and doing their best on So You Think You Can Dance. It took me more than a few years after my divorce to really love myself, but Eddie showed me that I was worthy of love. 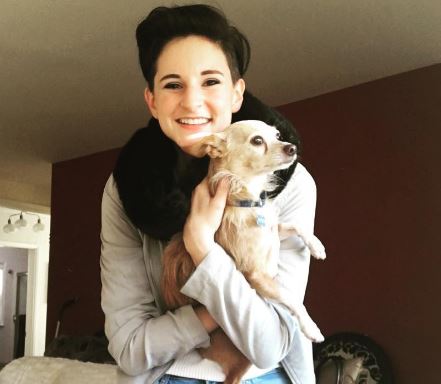 One sunny day, several months after Eddie and I found our groove, I took him for a walk. I looked good, he looked good, and we were both really feeling ourselves. (We felt a little bit like Angela Basset lighting that car on fire in Waiting to Exhale.)

Walking down the street, feeling great about myself, with a little spirit guide in tow, I saw my first glimpse of myself becoming the woman I’d always wanted to be. 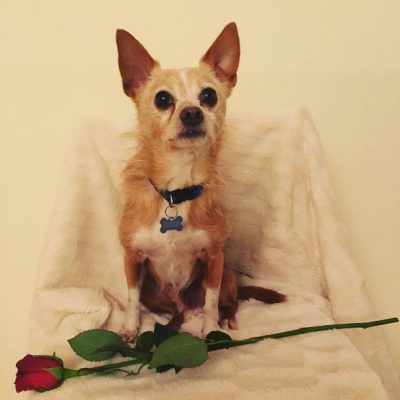