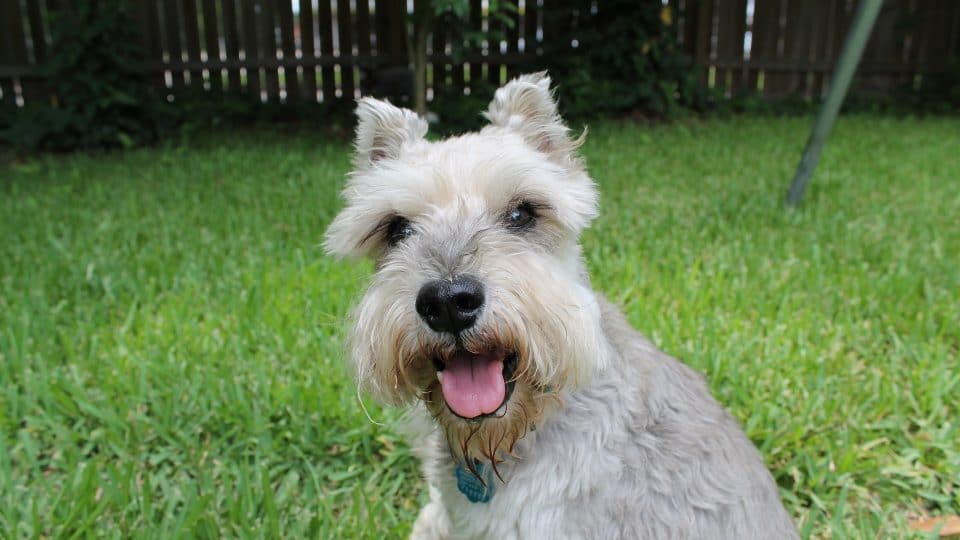 Bouncy, playful, and full of attitude, a miniature schnauzer loves getting their nose into your business. With a mustache and human-like eyes, they want to know everything that’s going on around them.

How do I know this? Well, I recently rescued a spirited miniature schnauzer named Huxley. It was love at first sight when I saw him at Emerald City Pet Rescue with his mustache, white beard, and loving attitude. He instantly collapsed on my lap and looked up at me with his big, brown eyes. He’s full of spunk, can jump up to my shoulders, and loves to cuddle on the couch.

Huxley is a small dog with a whole lot of heart, weighing in at about 19 lbs. He, like most mini schnauzers, is a “people dog”: extroverted, energetic, and craving mental stimulation. He especially loves being around his humans. Huxley requires a great deal of attention; he spends much of his day nestled against my side trying to get me to pet him or playing with a variety of dog toys. 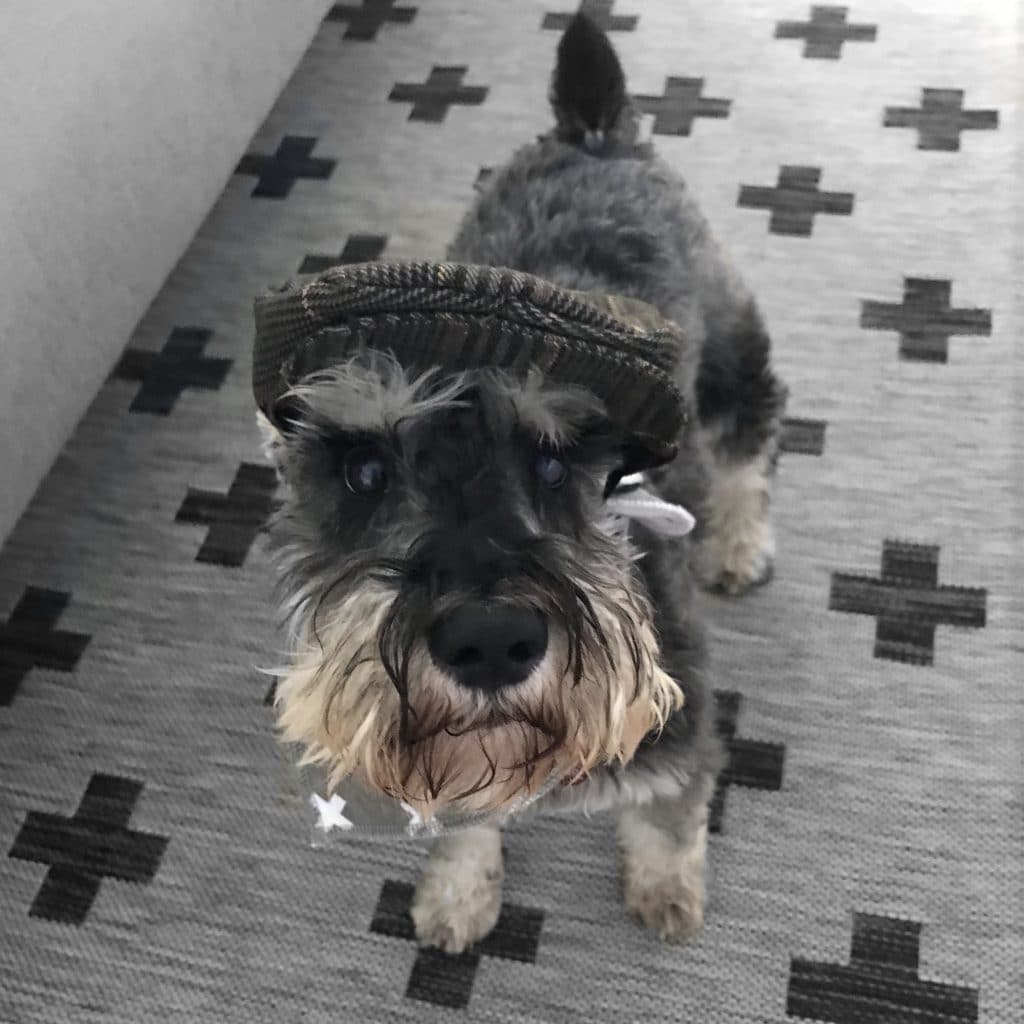 Since bringing him home, I’ve gotten to know the ins and outs of owning a miniature schnauzer, and I want to share 8 things about the mini schnauzer that you should know.

#1: Miniature schnauzers are a mixture of three super-cute breeds

When you’re walking down the street with a mini schnauzer, people will ask you what kind of dog they are! The miniature schnauzer consists of standard schnauzer, Affenpinscher, and poodle.

This unique combination gives them a different temperament than other terriers of the same size, along with their distinct facial hair. 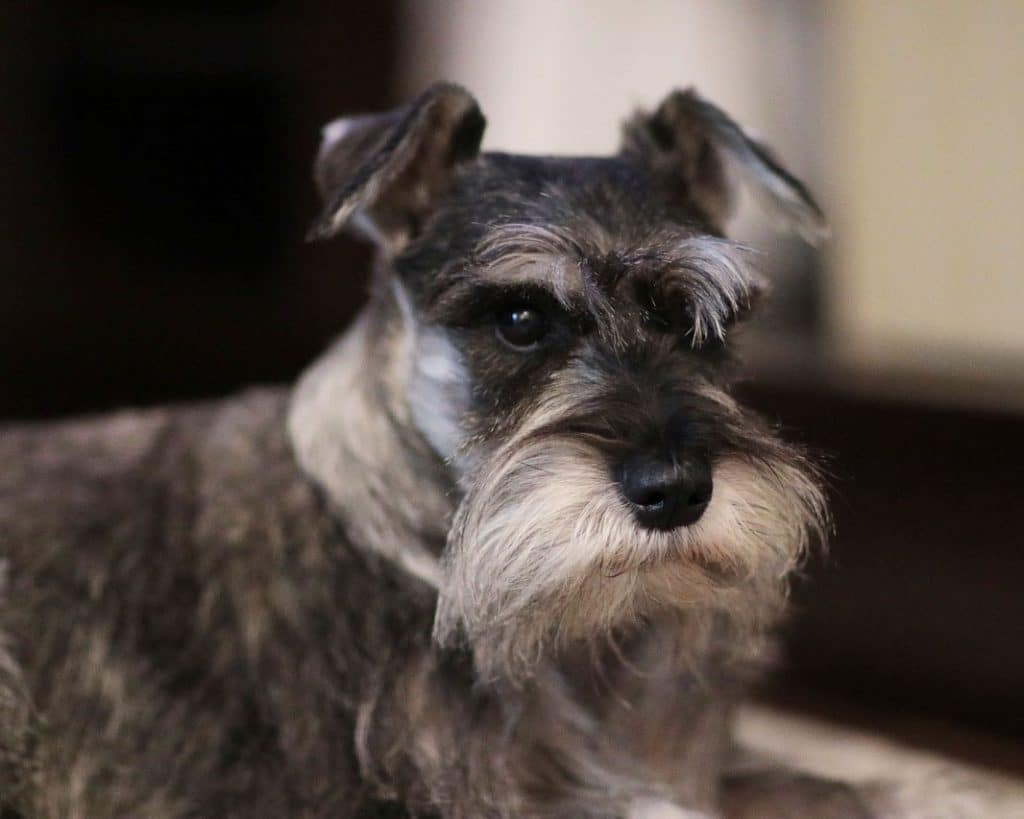 #2: They all have their own distinct look

Because breeders decide what happens to their ears and tails, the look of a mini schnauzer can differ, but they’re all adorable. 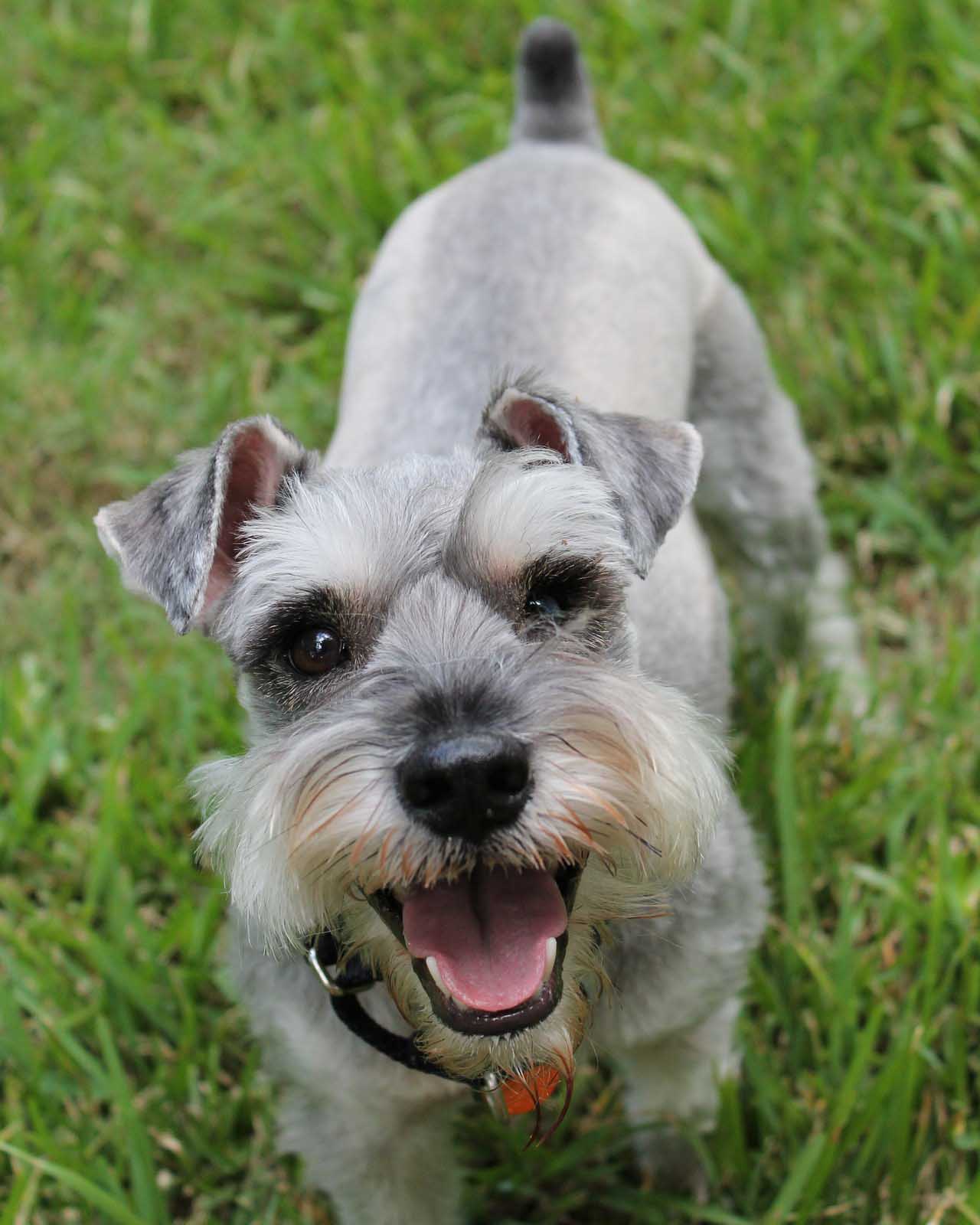 #3: They have very serious beards and eyebrows

Named after the German word for snout (schnauze), the mini schnauzer is definitely nosy, but in the best way. Take one look at a schnauzer’s face and you’ll know it’s referring to their distinctively shaped snout and flared-out whiskers that make them look like a grouchy old man.

Mini schnauzer eyebrows are usually cut in a sharp angle to the outer corner of the eye and beards are left long. 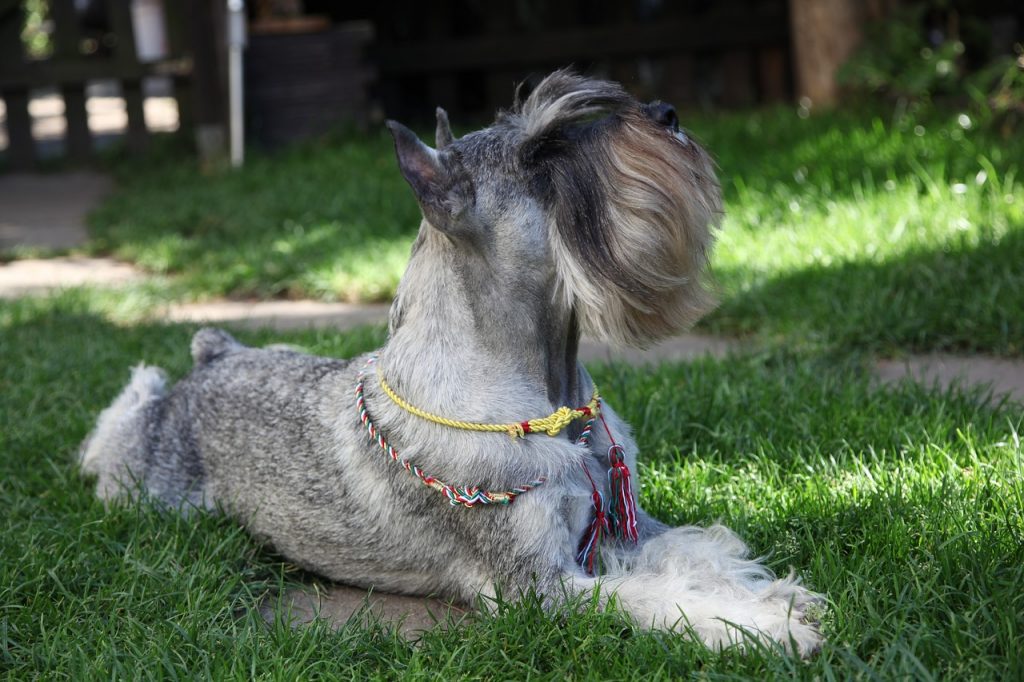 Image by zora4dogs from Pixabay

According to the AKC, the standard mini schnauzer coat comes in three color combinations: salt and pepper, solid black, and black and silver. There are also white, brown, and mixed color mini schnauzers.

What’s more, these coats don’t shed and are considered hypoallergenic. Their coat is either soft (smooth texture) or wiry (coarse texture). 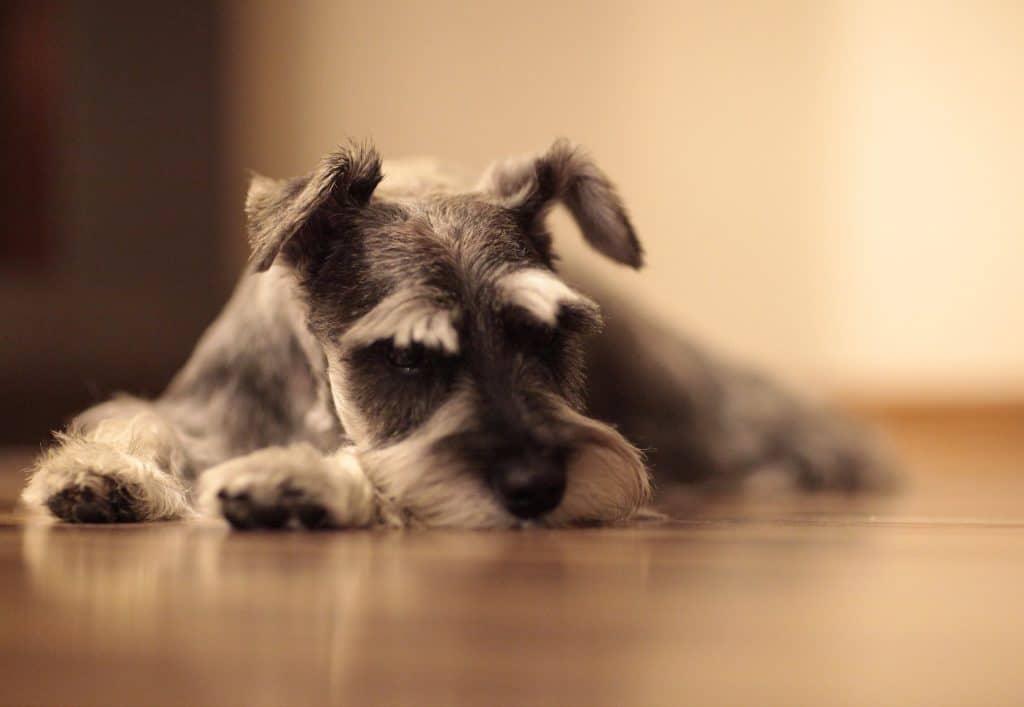 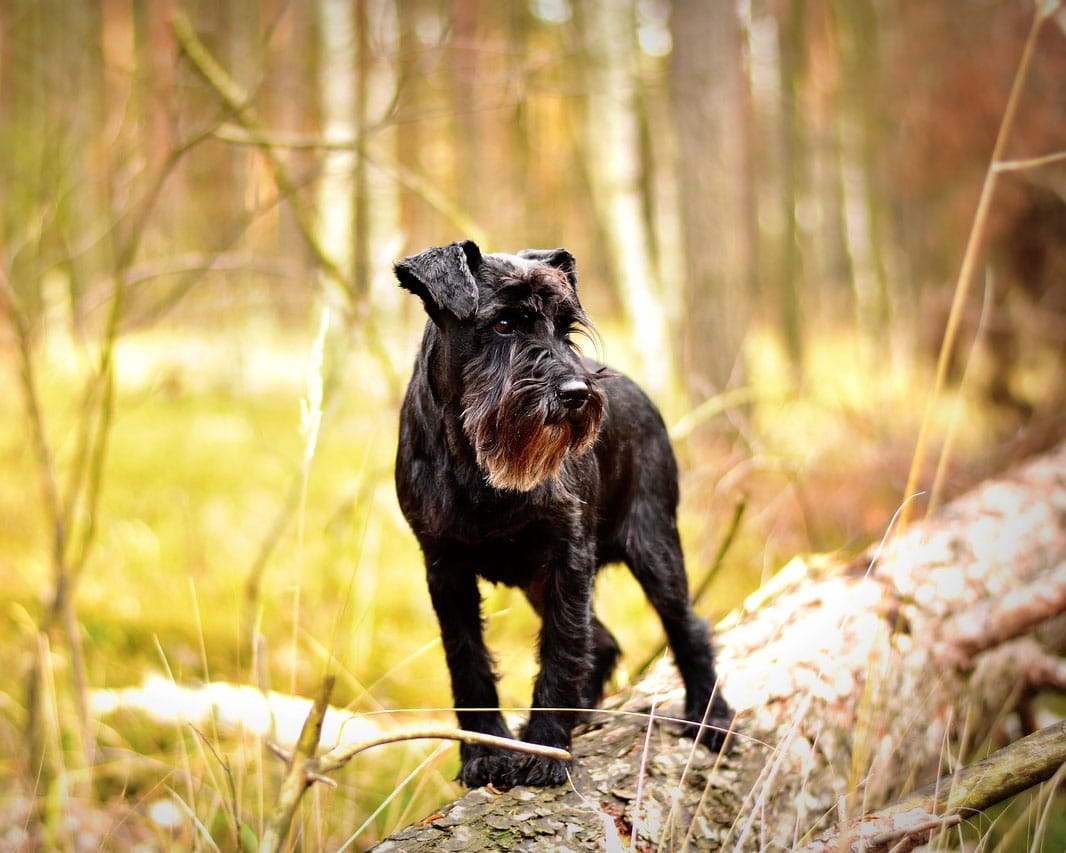 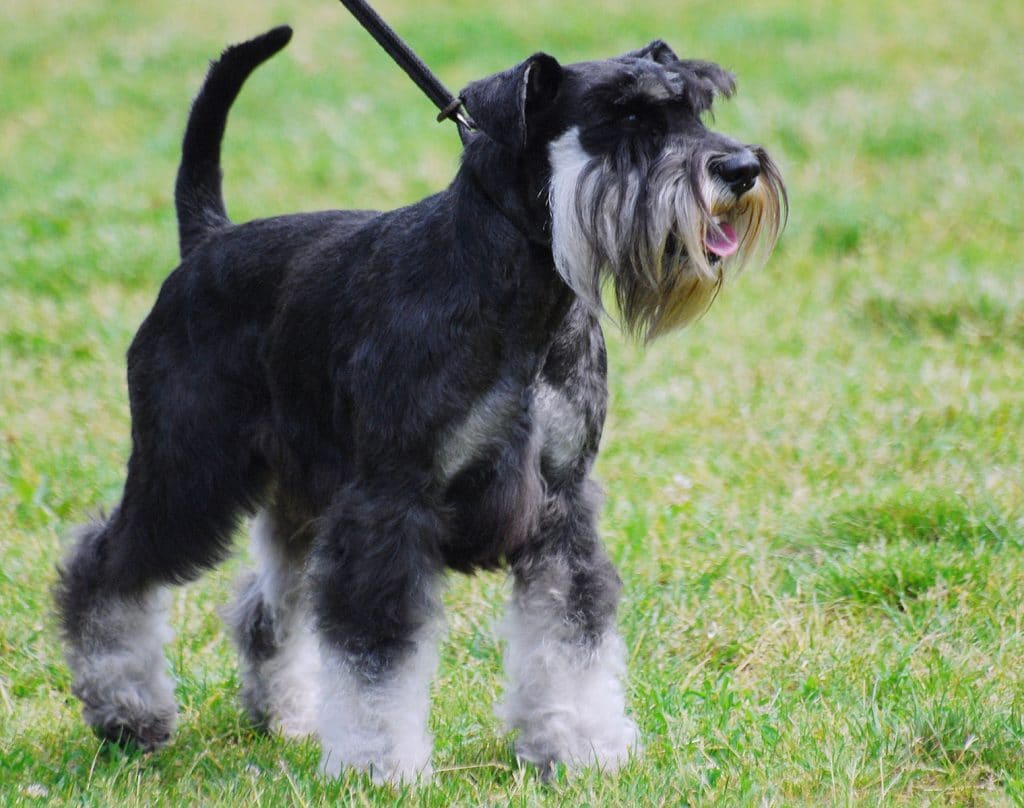 After I adopted Huxley, I learned that my aunt was named after a miniature schnauzer named Wendy, who was evidently “the smartest dog” my grandparents ever met.

Mini schnauzers are ready to please their humans and learn new tricks. Miniature schnauzers do well in canine sports such as agility, obedience, and rally, but can also learn how to do some pretty advanced skills like fetching your shoes or opening doors. Check out the miniature schnauzer Jonesy winning the 2017 Masters Agility Championship!

Huxley has been incredibly easy to train. He’s very intelligent and eager to please; last week, I even taught him how to run through an agility course. Huxley has given each of his plush toys a specific use: his alligator for shaking and throwing, a squirrel for gnawing, and a moose for carrying around.

Due to their high intelligence, they get bored easily. Mini schnauzers, when not entertained, might get mischievous, make up games for themselves, or even get destructive. 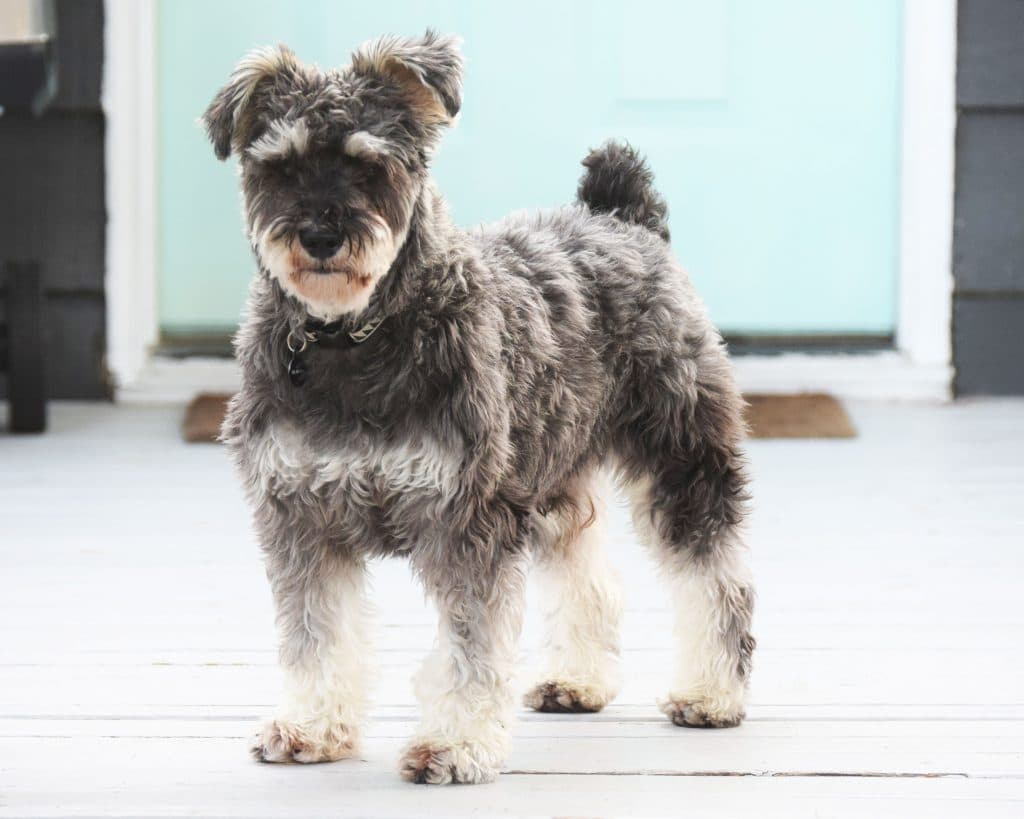 #6: They’ll let you know exactly what’s on their mind

Because of how smart they are, miniature schnauzers will learn to communicate with you using both verbal and non-verbal cues. They naturally love to vocalize, bark, and cry to let you know how they feel. Some mini schnauzers bark or shriek at every noise to alert you.

Huxley will bark when he needs water, use his paw to tap me when he needs something, or nudge me with his nose. He’ll even let me know if I do something he doesn’t like.

Schnauzers prefer to call the shots and do what they want to do.

If I’ve learned anything about mini schnauzers from Huxley, it’s that he’s in charge of himself. He’ll only jump on the couch of his own accord, not when I ask him to. He lets out a small growl when he doesn’t want to snuggle at night anymore (no snuggling after 9 pm). Huxley can also be a bit mischievous if he doesn’t get enough exercise or mental stimulation. 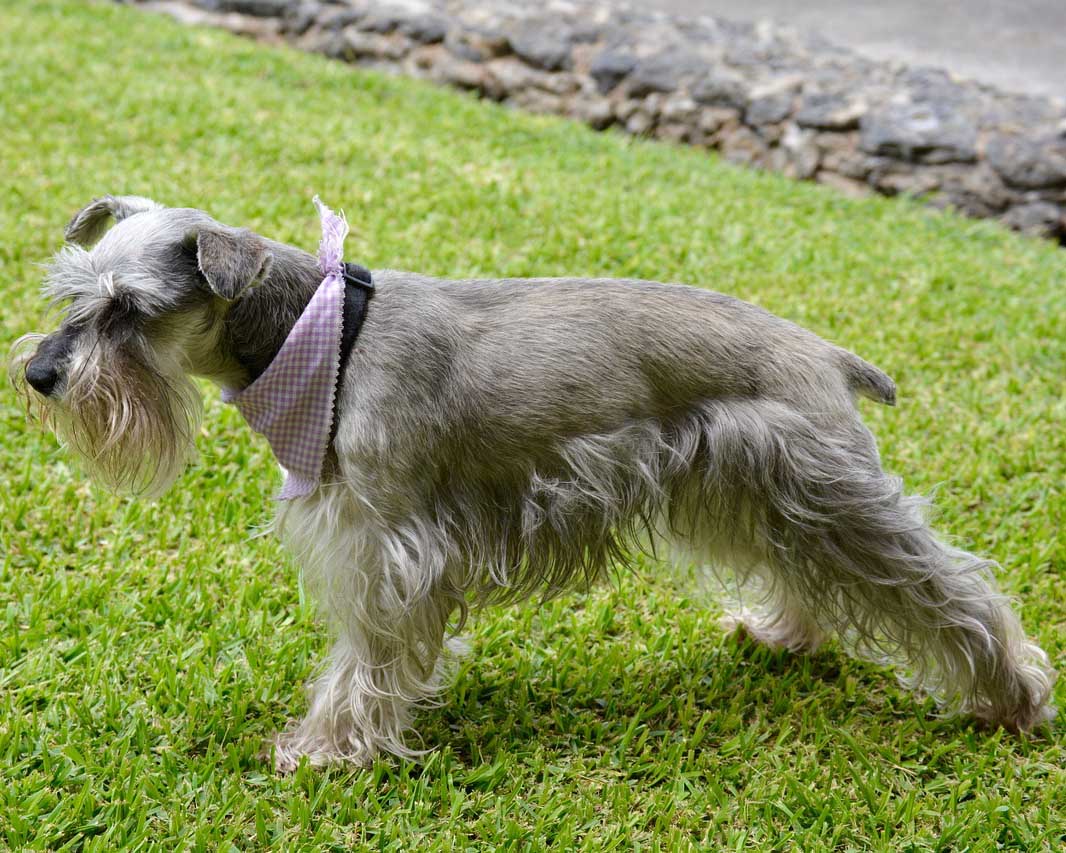 Whether it’s cuddling up to me or staring at me with his big eyes, it’s clear that Huxley loves me to the moon. He follows me everywhere and is happiest when both of his humans are with him.

Miniature schnauzers are friendly, smart, and obedient dogs, making them excellent companions for your family. The miniature schnauzer is people-oriented and wants nothing more than to hang out with you.

To say schnauzers are unique and special is an understatement; you just have to live with one before you can truly appreciate these wonderful dogs. 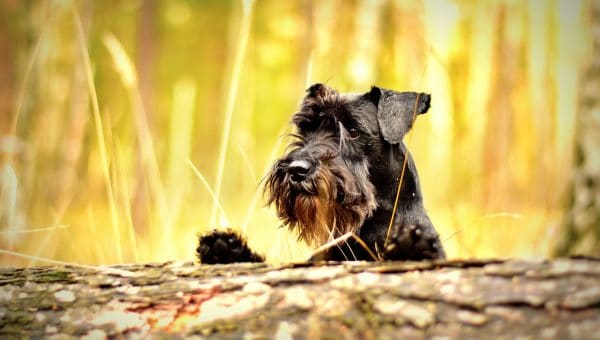 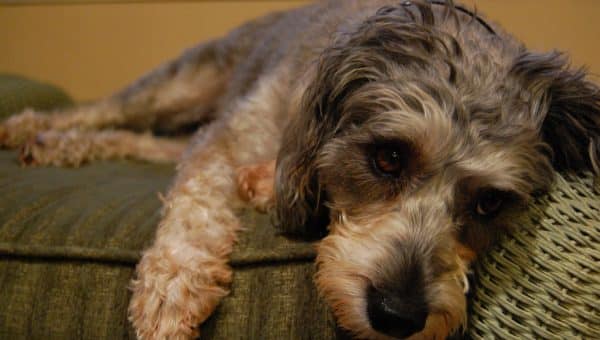