While the men and women in our military forces protect our country, many have four-legged colleagues who stand with them. Each branch of the U.S. military—Air Force, Army, Marines, and Navy—uses military working dogs (MWDs). They train these amazing canines for a variety of specialties including sniffing out explosives, detecting drugs, going on patrol, and apprehending and detaining enemy combatants and suspects.

Between 10 to 15 percent of military dogs come from the 341st Training Squadron at Joint Base San Antonio-Lackland, Texas. The vast majority of these dogs are German shepherds, Dutch shepherds, and Belgian Malinois breeds.

Some of these dogs will become MWDs, some will go on to work with other law enforcement agencies, and some will become family pets. No matter their destination, all of these puppies need foster homes at the beginning. And as they retire, MWDs need permanent homes. We spoke to staff from the military working dog program at JBSA, along with and foster and adoptive families of these dogs, to find out more.

The puppies are born at JBSA Lackland and are raised to 6 or 8 weeks old before going into volunteer foster homes. The puppies come back to base at 7 months old for their first test.

Volunteer foster families MUST live within a two-hour driving radius of JBSA Lackland. Prospective foster homes cannot have children younger than 5, the home must be a secure property with a 6-foot fence, and the foster cannot have over three personal dogs.

We spoke to Dr. Stewart Hilliard, chief of the Military Working Dog breeding program at the 341st Training Squadron, about how they find out if the foster home is suitable. He explained, “we have them come in a minimum of once a month to look at the puppy’s behavior and interview the foster volunteer on how things are going in the home.”

This litter of Belgian Malinois was born at Joint Base San Antonio Lackland on Veterans Day! The #341TRS trains ALL…

Renae Johnson, the MWD breeding program foster consultant, screens homes and places dogs in foster homes. “The biggest thing for fosters is that their job is to protect the puppy from itself,” she said. “Our puppies don’t understand they are babies and they go out and think they are working dogs. If we don’t engage them, they become very destructive.”

Those interested in fostering receive a guidebook and application. Successful fosters work from home, can take puppies to work, or are retirees. Unsuccessful candidates work outside the home or cannot bring dogs to work.

There are many repeat fosters in the program. “Our fosters have to be even more special to raise them and then do it again,” Johnson said. “It’s like a way of life for them. We have fosters that have raised five and 10 puppies. One foster is on her 18th puppy. That’s nine years of their lives dedicated to raising military dogs, and they have zero military affiliation.” 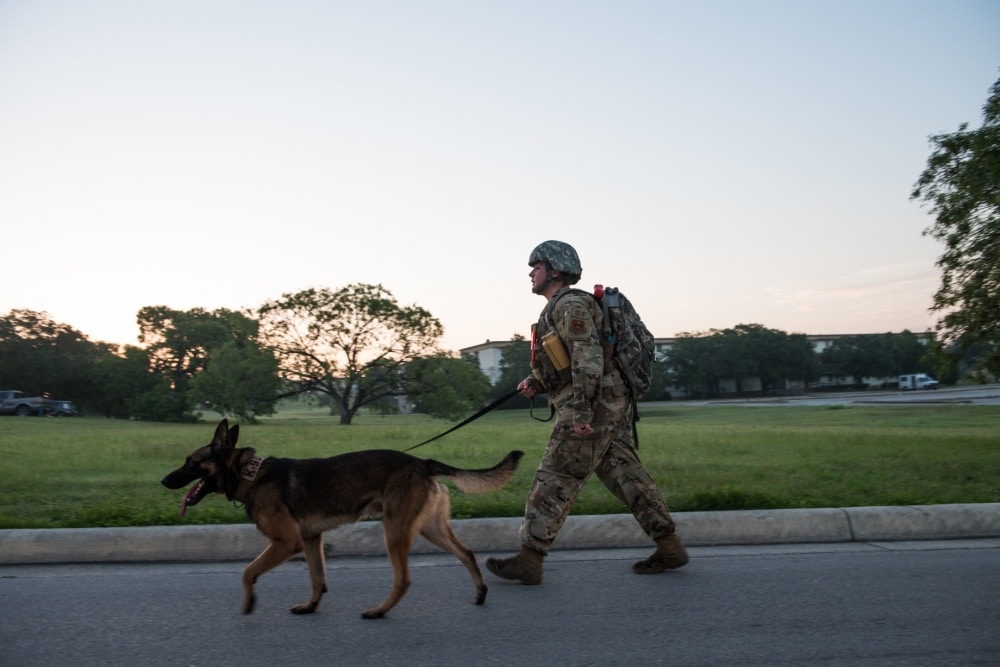 Vet care is supplied by the program as well as all equipment including two crates, toys, feed pans, and food. “We reinforce the two-hour radius because the puppies have to be seen only by our veterinarians on base,” Johnson said.

Puppies are seen at 9, 12 and 16 weeks by veterinarian staff at JBSA Lackland and are prescribed monthly preventatives.

“Anything and everything is provided, and if there’s an emergency and it’s too far to drive to the base, we coordinate an emergency vet that is paid for by us,” Johnson said. “The intent is that fosters should not pay out of pocket for anything.”

Dr. Hilliard explained, “in principle, all dogs are trained to be dual purpose, working either drugs or explosives and also patrol. [However], some dogs wind up in special-purpose either in patrol or detection, only because they don’t pass other parts of the training program.”

It’s hard to know which puppies will ultimately be successful as MWDs. Those who don’t pass any of the DoD initial testing are often adopted by the fosters or other members of the public, while some are transferred at no cost to other law enforcement agencies for more personalized training.

The dogs who pass the testing go into the kennels and begin training as a military working dog.

Puppies graduate from the MWD training program in 18 months. They are usually shipped to their installation by 20 months. “The dogs are normally assigned to one handler but the dog has to be capable of accepting handler changes easily,” Hilliard said.

Thanks for joining us to celebrate our littlest teammates, check out NBC Nightly News with Lester Holt tonight for more…

After serving, the dogs go into retirement. “To a great extent retirement depends on how much work they do,” Hilliard said. “During the height of the war against terror typical retirement was around 8 or 9 years of age. Now typical service life is increased probably to 10 years or more. They tell us because they lose their physical ability to do work or because they get on in years and lose acuity, accuracy, and the desire to work.”

Usually, it is a dog’s handler who notices when a dog needs to see a vet to evaluate whether the dog is unserviceable. Dogs ready to retire go through a specific protocol before being put up for adoption.

Often, military dog handlers end up adopting the dogs. “Otherwise they go to the first suitable person who likes the dog on the queue,” Hilliard said, adding that there is a long waiting list to adopt these dogs.

Until they are adopted, the dogs live on base in a kennel, and potential adopters can bring family dogs to meet them to see if things work out. 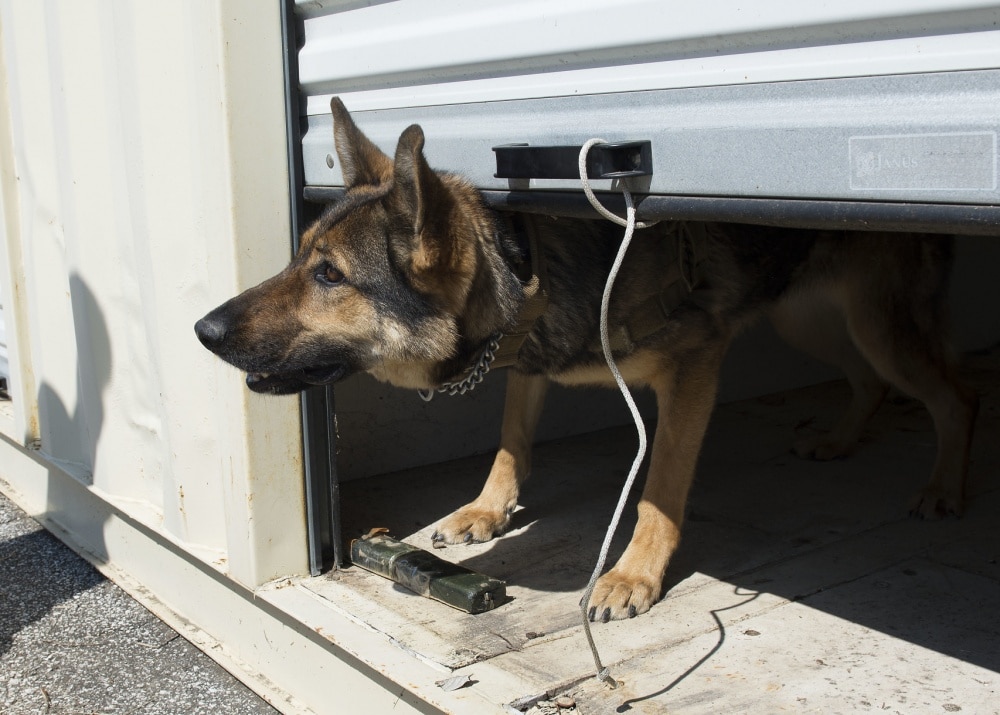 Dogs can be adopted out all over the country. “However, dogs who still have working ability or value are directed toward law enforcement or other federal agencies before being adopted out to the general public,” Hilliard said.

Jerry M. Britt Jr., DoD MWD Disposition Coordinator, handles adoptions of the MWDs with the 341st Training Squadron. He looks for adopters who have a genuine desire to provide loving homes and consistent care for the dogs.

As a general rule, the dogs become part of the families when they are adopted. “The feedback I receive from adopters is generally positive regarding their adopted MWD transitioning to the ‘home life,’” Britt said. “It can take weeks or months for the MWD to become a ‘pet’ but they tend to acclimate to the new environment in a timely manner.”

These retired MWDs are usually seniors with medical challenges. “They are medically dispositioned for degenerative joint disease, arthritis, and lumbosacral stenosis or spondylosis to name only a few,” Britt said. “The saving grace for the older MWDs is US War Dog Association, a nonprofit that provides lifelong prescription medication funding.”

However, the younger MWDs that haven’t yet served do not qualify for the assistance.

Adjusting to Civilian Life at Home

Robert C. Klesges, professor at the University of Virginia Medical Center, has adopted twice from the program. He adopted Fida (now deceased) about seven years ago when she was 9, and five months ago he adopted Frida (now that’s a coincidence!). Frida was retired at 2 because she feared the sound of gunfire.

After learning about the MWD adoption program from a staff member, “I jumped on a plane and came down there,” he said. 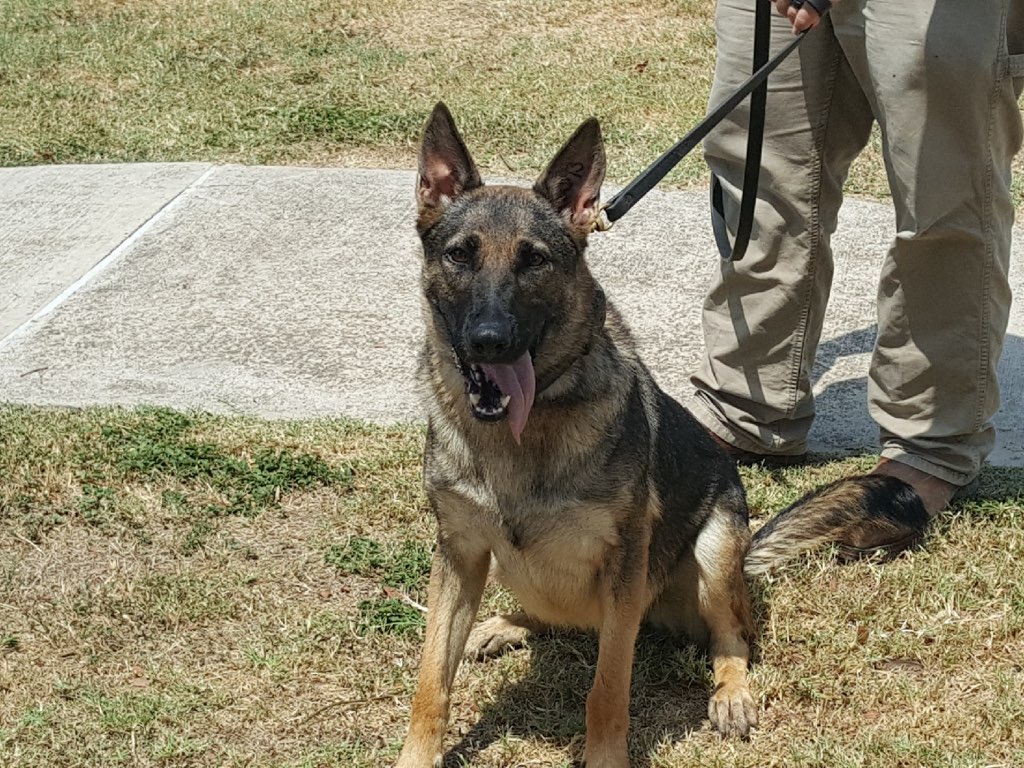 Fida, a Belgian shepherd, was retired due to health issues after serving her country for 8 years including a deployment to Iraq. “When I learned Fida was 9 with health issues, I called my local vet and asked his opinion,” Klesges said. “He said if I got ‘two good years’ out of Fida, it would be worth it.”

Klesges came within one month of having Fida for six years before she died. She was buried in the place of honor for service dogs at his local pet cemetery.

“The experience of adopting and loving a military working dog is one of the most gratifying experiences you’ll ever have,” Klesges said. “While all dogs are loving and provide comfort, the retired MWDs are truly something special.”

For the men and women at the 341st Training Squadron, the health and welfare of the MWDs are of the utmost importance. The ultimate goal after the dogs’ retirement is adoption to a loving and caring home.

“Adopters are not only benefitting an MWD, they are bringing some ease and comfort to us in the process,” Britt said.