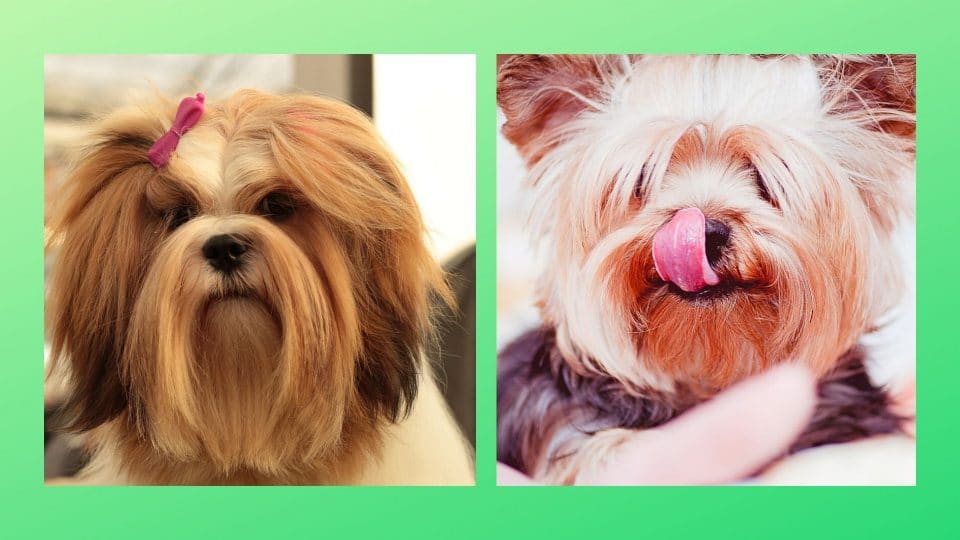 The Lorkie, also known as the Yorkie Apso or the Lharkie, is a super-sweet and regal designer dog that was created to be the perfect cuddle buddy.

The Lorkie has inherited an adorable combination of traits from its parent breeds, the Lhasa Apso and the Yorkshire terrier, but they have some unique quirks that make them their very own breed of dog. Is a Lorkie dog right for you? Read on to find out.

Both the Yorkshire terrier and Lhasa Apso are known for their small statures and stunning locks of hair, so it’s no surprise that the Lorkie displays both of those traits with pride, too. Still, since the Lorkie is a mixed-breed dog, it’s impossible to tell exactly what a Lorkie will look like. A Lorkie pup could easily take on characteristics of either parent breed, and will likely be an interesting mix of the two.

According to the American Kennel Club, Yorkshire terriers are especially tiny dogs, standing just seven inches tall when full-grown, and weighing in between seven and eight pounds. Lhasa Apsos are bigger (yet still pretty small), with the males standing at 10-11 inches tall, and weighing between 12-18 pounds. Female Lhasa Apsos are slightly smaller than their male counterparts. You can expect your Lorkie to fall anywhere between the sizes of their two parent breeds.

Both parent breeds have long, silky, human-like hair, so the Lorkie will, too. The exception is that the Lhasa Apso has hair that is thicker, often parted right down the middle—a trait your Lorkie may or may not have.

Yorkshire terriers tend to be tan and gray, but Lhasa Apsos can be nearly any canine color, so there’s no standard color for this designer breed. In fact, one litter of Lorkie pups may be full of puppies that nothing like each other.

Yeah going away is good and all that, but not compared to coming home to this little scruffo 😍

One look at the Lorkie and you’ll know there’s nothing low-maintenance about this breed, and its grooming needs are no exception.

According to Pet Guide, Lorkies should be brushed each and every day. Without that, you risk tangles and mats—and your Lorkie probably won’t be very willing to sit still while you work them out. If you’re not excited about brushing your dog every day, keeping their coat cut short will help keep it in check without as much attention.

However, not every dog owner with a pair of scissors can properly groom a Lorkie—especially if they have coats more like the Lhasa Apso (with thick hair and difficult parts). Take your Lorkie to a reputable groomer to make sure they’re always looking their best.

Lorkies need baths at least once a month, more often if they tend to get stinky.

Much like both the Yorkshire terrier and the Lhasa Apso, the Lorkie is sweet and affectionate, and would happily spend most of its day on your lap. They quickly develop a strong devotion to their person (or people) and are as loyal as they come.

Lorkie dogs tend to be clingy. When they’re not on your lap, your devoted Lorkie will likely be by your side, happily acting as your shadow and following you wherever you go.

Smart and always eager to please, Lorkies also like to be the center of attention. They will quickly learn how to catch your eye and may act a bit like the class clown to get the attention they crave.

Lorkies are also playful. While they love to spend time fetching small balls, they can also be occupied by chewing on squeak toys or working out their brains with interactive toys.

Thanks to their small size, Lorkie dogs are the perfect canine companions for apartment dwellers.

Since they don’t need a lot of exercise, they can get all the workout they need by taking a short daily walk, or even by chasing a ball across a living room or small back yard, so they don’t require outside space.

However, if they do have a yard to play in, it should be fenced—the smaller the dog, the easier it is for them to escape, and Lorkies are certainly smart enough to figure that out.

Because Lorkies don’t need a ton of exercise, they make excellent companions for senior citizens or people with mobility issues.

They also work well in homes with older children, but families with small children should think twice. Their small size makes Lorkies fragile, and small children may not be careful enough to keep them safe.

Lorkies don’t do well on their own for long periods of time, so they’re best with families that spend a lot of time at home—extra points if at least one person is home most of the time.

You might think that because Lorkie dogs are both smart and eager to please, they’d be easy dogs to train…but you’d be wrong.

Lorkies are just as stubborn as they are intelligent—and they have short attention spans—which means there’s a good chance they’ll understand what you want them to do, and less of a chance that they’ll actually do it.

Your best bet when training a Lorkie is to have several, short training sessions, and to be consistent in both your training methods and in what kind of behaviors you expect.

Starting training as early as possible is crucial with Lorkies, as bad habits can be hard to break with this breed.

It’s also very important to teach Lorkies independence from an early age by leaving them alone for short periods of time and slowly increasing that time. Their high level of devotion means they are predisposed to developing separation anxiety, a disorder that can be harmful to both the dog and to your home.

According to the Institute of Canine Biology, a recent study has shown that mixed breed dogs are less likely to fall victim to genetic disorders than their purebred counterparts. This means that, while there’s no guarantee your Lorkie dog will be a vision of great health, it does stand a fighting chance.

Of course, Lorkies are still at risk for any health issues to which their parent breeds are predisposed, so we have to look to the Lhasa Apso and Yorkie for clues about what health issues owners may expect to encounter with their Lorkies.

Lhasa Apsos, while also predisposed to eye issues, are also at risk for mild or severe hereditary kidney dysfunction. According to The American Kennel Club, there’s no way to test for this genetic trait, but responsible breeders will remove carriers from their breeding rosters.

Since they’re a small breed, Lorkies are also prone to weight gain—something that’s hard to handle on such a tiny frame. Lessen this risk by feeding your Lorkie only the amount of food recommended by your vet (probably around one cup per day), divided into two meals—and try to limit the treats, no matter how much they beg.

While it’s likely that Yorkshire terriers and Lhasa Apsos have been mixing for decades (or longer), they’ve been popular among designer dog lovers for about 20 or 30 years.

To really understand Lorkie dogs, though, you have to look to their parent breeds.

Yorkshire terriers have been around for centuries, originally bred from Scottish terriers by weavers in Scotland in the middle of the 1800s, after moving north to England. Their small size made them perfect for hunting rodents that were rampant in textile factories. Fortunately for Yorkshire terriers everywhere, they didn’t remain working dogs for very long. Yorkshire terriers were recognized by England’s Kennel Club in 1886, and soon after became better known as lapdogs—something they’re still known for today. They were spotted most often on the laps of English ladies.

After this abrupt shift in duties, Yorkies were bred smaller in size to help them better fit their new perches.

The Lhasa Apso is a much older breed, thought to be one of the oldest dog breeds known, tracking back to at least 800 A.D. Over a thousand years old, Lhasa Apsos worked as sentinel dogs as palaces and Buddhist monasteries in the Himalayan Mountains, barking to alert of intruders or new arrivals.

Lhasa Apsos have long been associated with the Dalai Lama and were brought to America in the 1930s and 1940s when given as gifts by the Dalai Lama.

Getting a new dog is not a decision to be taken lightly. Not only do you need to evaluate whether or not a dog fits with your lifestyle, family, and home, but you also need to decide what kind of dog is best suited to you.

If you’ve decided on a Lorkie dog, congratulations—your home is about to be filled with lots of puppy cuddles and canine love. But deciding on a type of dog is only the first hurdle. Now it’s time to actually locate your future Lorkie.

The two most popular choices for finding Lorkies are through breeders and rescue organizations. Both options have fallbacks and benefits, so it depends a lot on what type of adoption experience you’re looking for.

Since Lorkies are a new breed, there may not be a lot of options for finding one through a rescue organization, but it is possible. Diligent internet searching will turn up options for rescued Lorkies, but you may have to travel a long distance to find one. If the organization isn’t local to your area, do your research and ask questions to make sure they’re reputable.

There may be drawbacks to adopting a Lorkie through a rescue organization. It’s likely the dog you find will not be a puppy, and you may not be able to learn much about its past. However, its age may also be a plus—there’s a good chance an adult Lorkie will be house-trained, and it will likely have been socialized through the rescue. It will also have been spayed or neutered and will have received all of its required immunizations.

All of this greatly reduces the cost of ownership for you—as does the adoption fee, which is usually much cheaper than the price of purchasing a Lorkie from a breeder.

It’s often more difficult to find reputable Lorkie breeders since they are not a breed registered by the AKC, and therefore won’t be listed among their approved breeders. Before you commit to a Lorkie breeder, ask around about them—your vet or other local breeders may be a good resource. When you visit, be sure to ask about any health issues in the dog’s bloodline, and discuss any genetic tests you might want to run.

Want to know more about Lorkies? Rover has you covered on everything from top names to the best beds, leashes, and gifts for this type of dog.