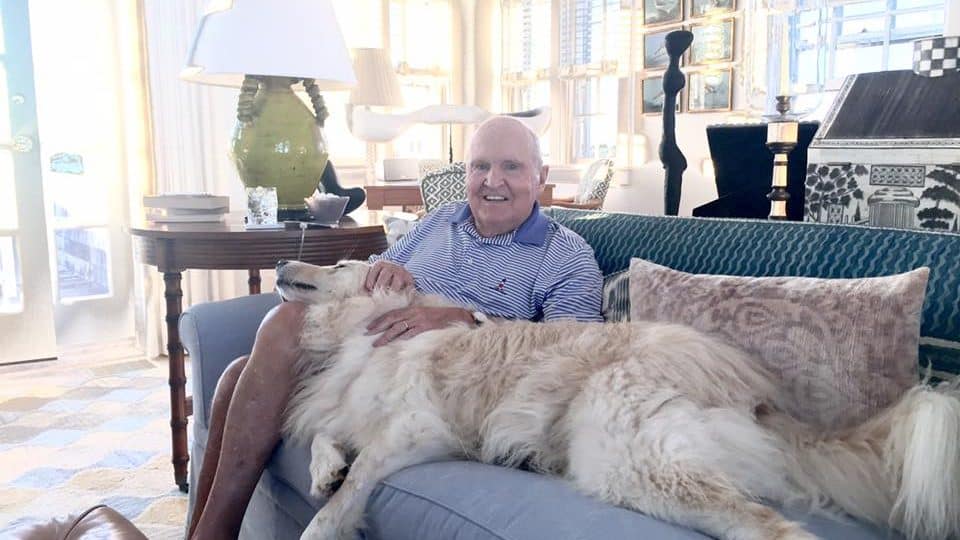 Jack Welch, former CEO of General Electric and renowned business leader, is famous for his strong and fiery opinions, and for almost his entire life, not wanting a dog was one of them. But that changed one day five years ago when his wife wouldn’t stop crying.

“I didn’t get a job I truly wanted,” business journalist Suzy Welch said. “And it hit me harder than either of us expected. Jack tried everything to comfort me.” Finally, when nothing was working, he blurted out the words she’d been longing to hear for a decade: “Go get your dog!”

“I looked up and stopped crying and said, ‘Really?’” Suzy said, laughing fondly. “And he said, ‘If it’s going to make you happy, Suzy, go get a dog.'” 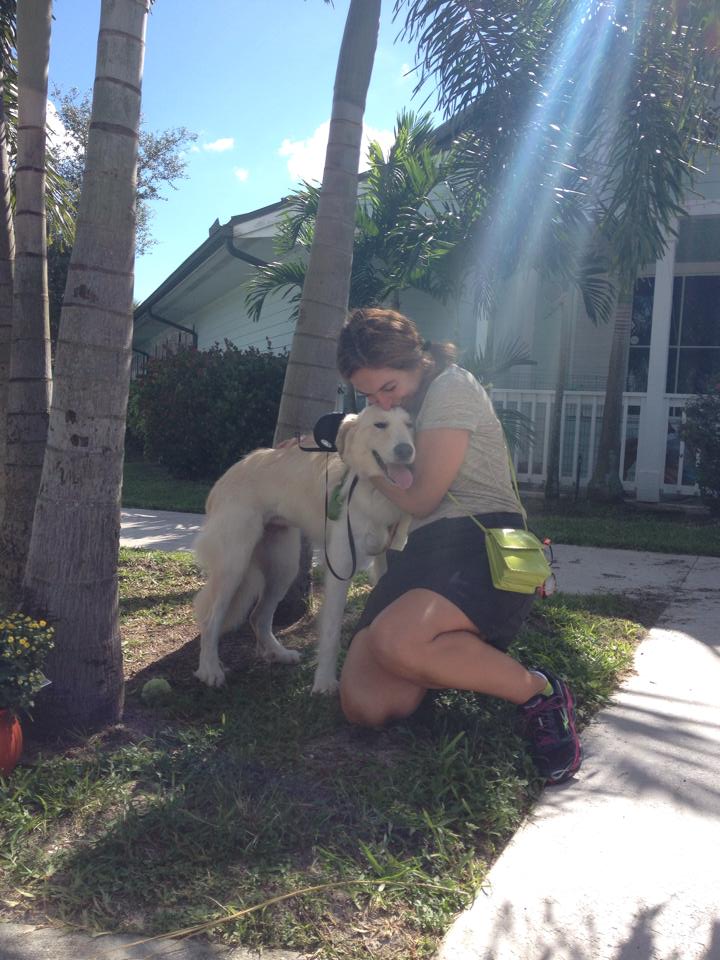 Suzy grew up in a true dog family, and she remembers all of them for their unique personalities, from Pandy the cocker spaniel to their many Cairn terriers. “I entered the world of dogs really young and have loved them ever since,” she said.

Jack, on the other hand, was raised without pets. And to make matters worse, when he was a young boy, he was bitten by a neighborhood dog. “From then on he was simply perplexed when people liked dogs,” Suzy said.

For most of their marriage, the couple traveled extensively and having a dog didn’t really make sense. “But I never stopped saying, ‘I’d really love a dog when we stop traveling,’” Suzy said. Jack always answered, “Please don’t ask me for a dog.”

But Suzy never gave up hope. “I kept on expressing to him my love for dogs, and he’d see me and the kids with dogs, but it didn’t make sense to him,” she said.

The Right Dog for Jack

The minute Jack changed his mind, Suzy leaped into action. She quickly sent an email to her friends at Big Dog Ranch Rescue in Loxahatchee Groves, FL (she served on the board at the time) to tell them she was coming to adopt her dog at last.

Robin Clark, another board member, was at the rescue the next day to welcome a transport truck filled with dogs arriving from high kill shelters in Georgia. “She texted to tell me that a white dog just arrived, and she said, ‘Suzy, I think this one’s last name is Welch,’” Suzy said.

Soon after, Suzy arrived, ready to meet every dog at the shelter, if she needed to. “I was trying to find a very particular dog because it was going to be Jack’s first dog,” she said. “The dog had to be gentle and have a welcoming face in order to have a fighting chance to enter Jack’s heart.”

After four or five hours of meeting dogs, Suzy was ready to meet the dog Robin Clark had texted about. “I fell to my knees,” Suzy said. “All I could say was, ‘This is my dog. This is my dog.’ It was love at first sight.” 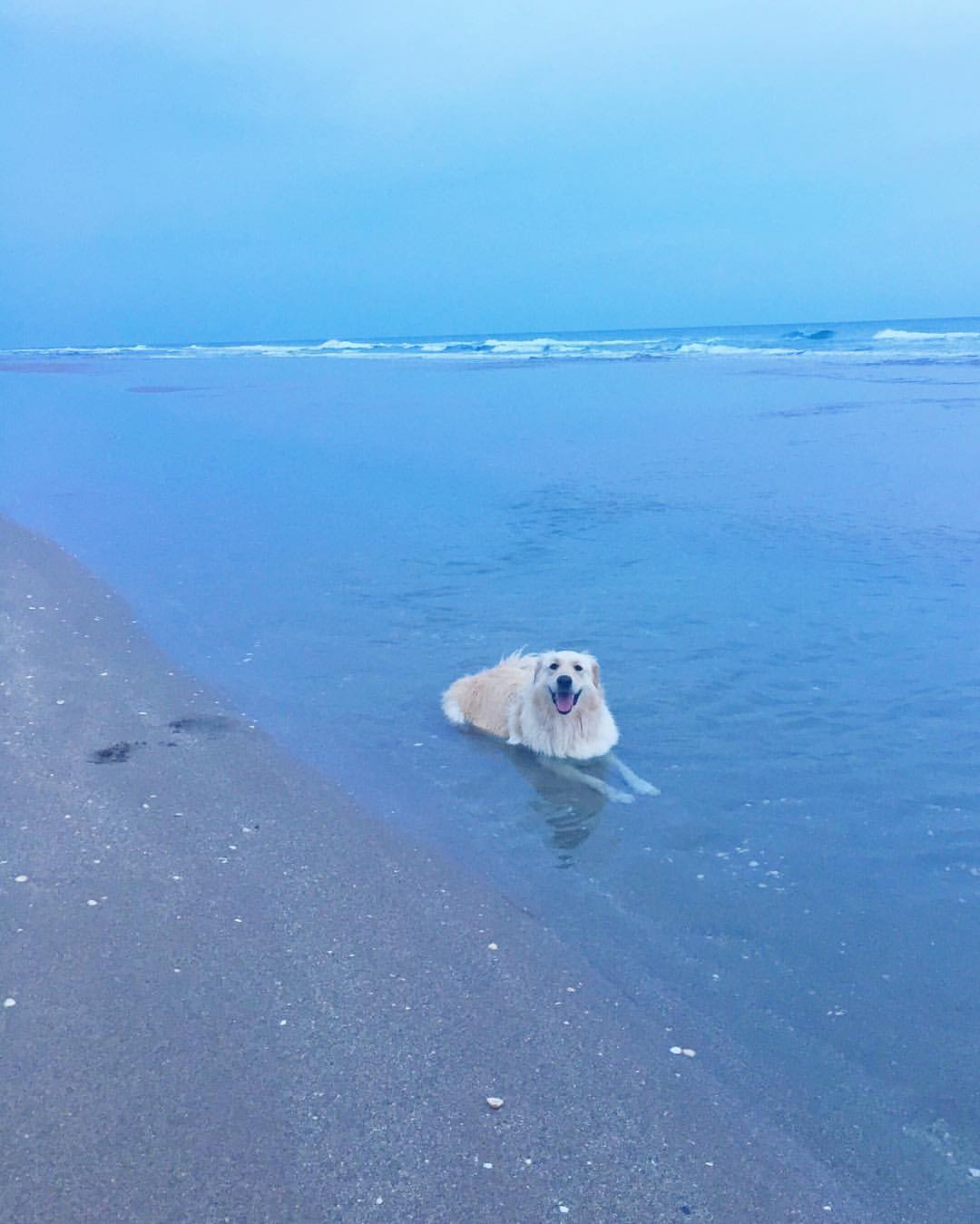 The dog she would eventually name Happy was a Great Pyrenees. She was about 6 months old, emaciated, mangy, and couldn’t focus or make eye contact at first. But Suzy sensed there was something in this dog that would open Jack’s eyes to the wonder of dogs. “She had a softness,” Suzy said.

Suzy adopted Happy, then left her at the shelter to get spayed and go through quarantine.

Come on, Get Happy

When Suzy got home that evening, she showed Jack a photo of Happy. “Suzy, I’m glad you found her, but I’m not going to have anything to do with her,” Jack said to her. “This is your dog.” Famous last words.

Within two weeks of Happy being in their home, Jack fell in love with her. “If somebody had said to Jack, ‘It’s your wife or your dog,’ He would have said, ‘Suzy, it’s been a good run,’” Suzy said, laughing now.

Jack Welch had officially become a dog person. And there was no turning back. 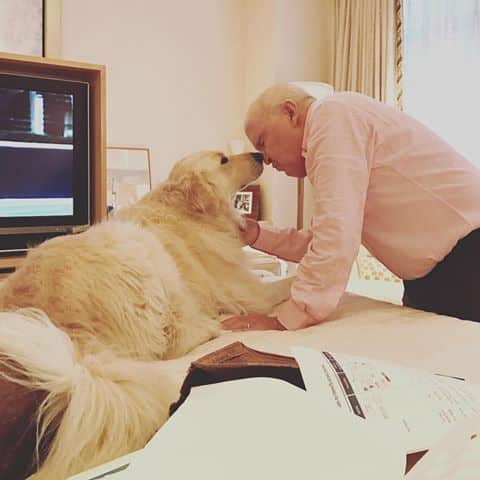 “Happy looked at him and Jack looked at Happy, and the two fell in love,” Suzy said. “Happy took it from there. She’d come up on the couch and snuggle her head in his lap. Jack would say, ‘Life doesn’t get better than this.’”

Jack not only became a fanatic about Happy but about dog rescue, becoming committed to and advocating for the cause. Jack and Suzy were even part of Best Friends Animal Society’s “Save Them All” campaign.

“He finally got it,” Suzy said. “And it continues to this day.”

Shouting from the Rooftops 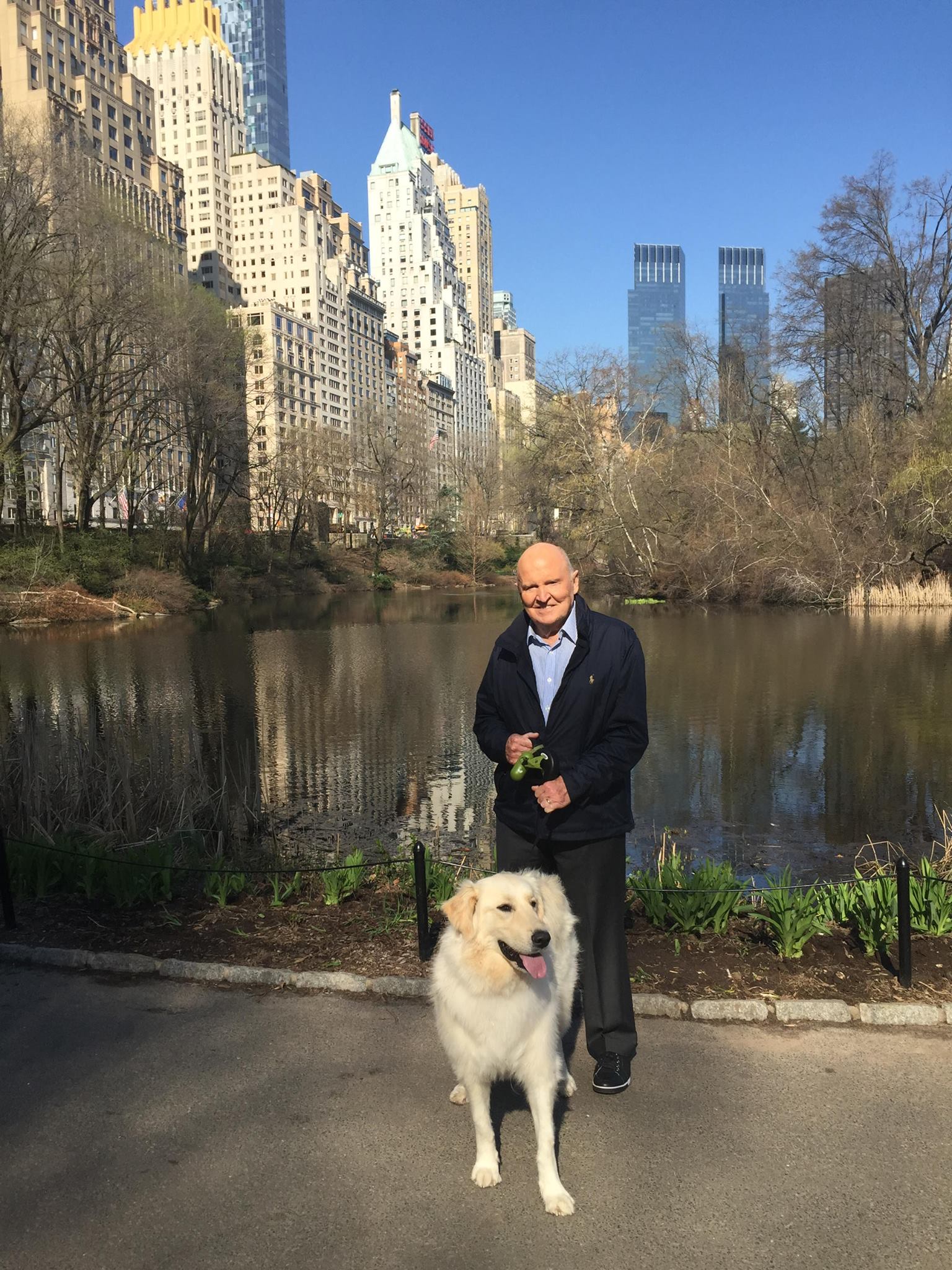 In 2018, during a business conference held at Radio City Music Hall in New York City, Jack gave a speech to an audience of thousands. During the Q&A, someone asked: “Jack, you’re known for all your successes, but surely you’ve made mistakes. What mistakes have you made?”

The audience cheered for about 10 minutes. “It was just the humanity of his answer,” Suzy said. “It was authentic, and people love dogs.”

Life Is Better with Dogs 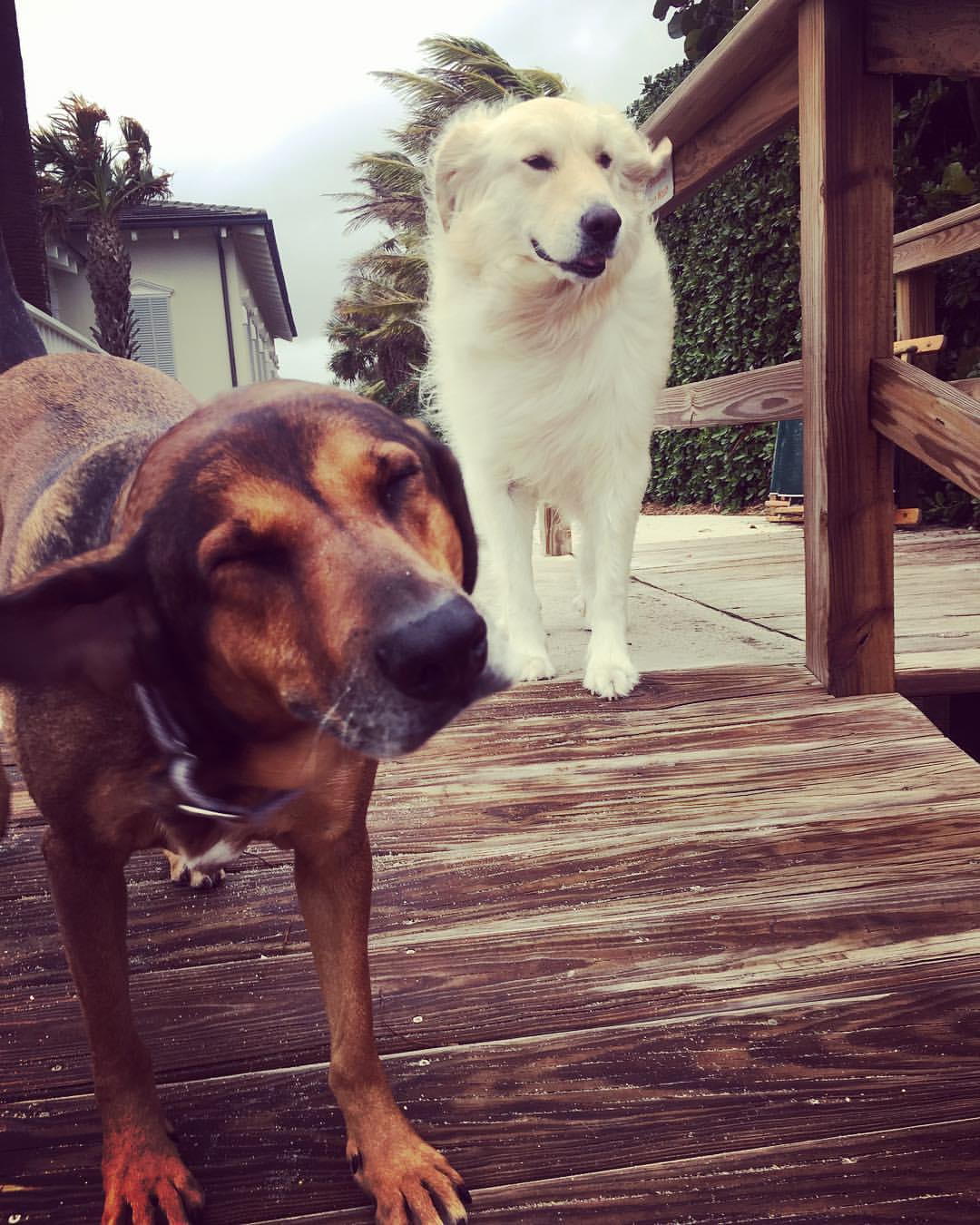 The Welches now have two rescue dogs. Chrissy is an old hound who had previously been abused. When she joined the household, she couldn’t be left alone and had terrible anxiety. “Because of consistent love, she is docile and darling and wonderful,” Suzy said. Happy and Chrissy are now a bonded pair.

The Welches have busy lives filled with responsibilities and challenges, but Happy and Chrissy bring them down to earth. The cliché that dogs live in the moment rings true for the Welches. “With your dog, time stops, and you live in this wonderful moment,” Suzy said. “Because of the pace of our lives, she slows us down, she centers us, and she makes us laugh.”

“Having a dog as part of your family is one of life’s greatest pleasures—as old as humanity,” Suzy said. “I’m so glad we’re part of that story, and Jack is too.”