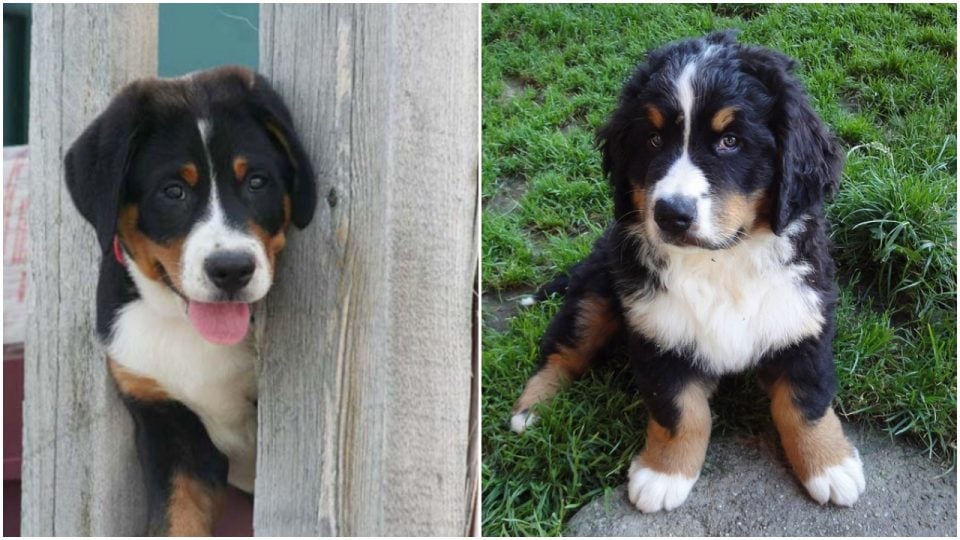 Caught in a love triangle with the Swiss Mountain Dog and the Bernese Mountain Dog? Can’t blame you. Both are so lovable, so good-looking, and such good companions! How do you possibly choose?

It’s true—the Bernese and Swiss Mountain Dogs are both irresistible breeds. And they have a great deal in common. Both working dogs hail from Switzerland, with the Bernese originating specifically from the Swiss region of Bern. Both wear the same black, white, and rust colors in their coat. And both make great additions to the family.

But there are a few differences to keep in mind, especially if you’re thinking about turning your love affair into a more serious commitment. 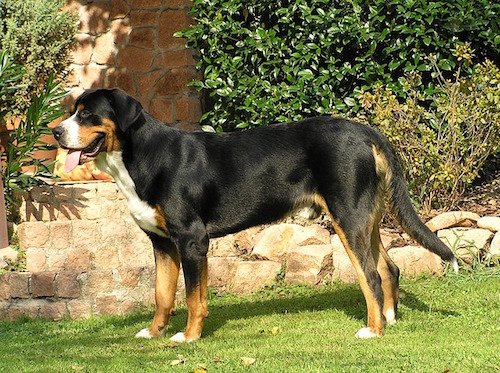 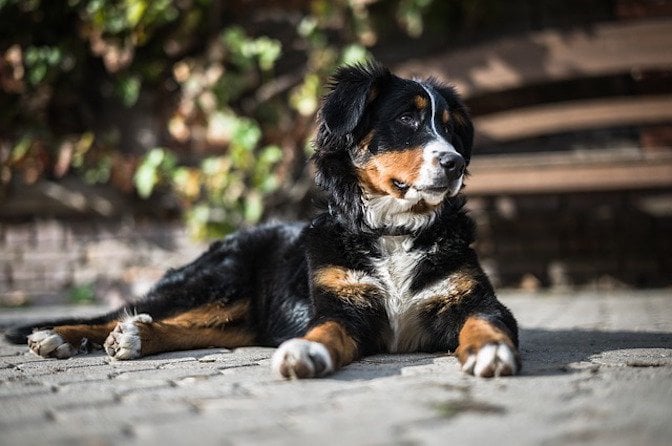 The Greater Swiss Mountain Dog traces back to the war dogs of Julius Cesar, who brought his armies over the Alps in an effort to conquer Europe. The Swiss used these descendants of Cesar’s mastiff-type dogs to haul carts of meat and dairy products through the mountains to market. For this reason, they’ve been called “the poor man’s horse.”

The Bernese Mountain Dog is closely related to the Greater Swiss, but localized to a region of Switzerland famous for its cheese and chocolate. The Bernese was also used for hauling, but also herding. Both are component breeds of the Saint Bernard and Rottweiler. 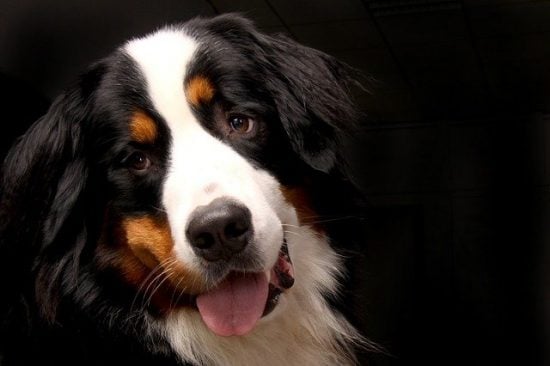 The Swiss and Bernese Mountain Dogs are similarly built with heavy bones and strong muscles. They wear a handsome combination of black, white, and rust colors in their coats, with similar marking patterns and a white “blaze” from the nose to the forehead. The Bernese wears a longer, heavier coat than the Swiss, which leads to distinct differences when it comes to grooming!

In terms of size and weight, the Swiss is slightly larger, averaging about an inch taller and 15 pounds heavier. For comparison:

Both breeds are prized for their devotion to the family and their loving disposition. The Swiss is a bit more imposing, both in size and personality. They’re ardent watchdogs and slightly more serious, but not aggressive. These robust dogs give off a booming bark, which your neighbors might not love, and they tend to move through the puppy phase more slowly. Because of their size, they can challenge an owner’s patience through this extended puppy phase. Their awkward, clumsy bodies (at 100 pounds) can make bumps and big paws a bit much to take.

The Bernese is known to be more of a teddy bear—more shy, laid back, and highly aware of how they move their large bodies around small children. The Bernese, over the Swiss, would win the Gentle Giant competition, but both are great family dogs. 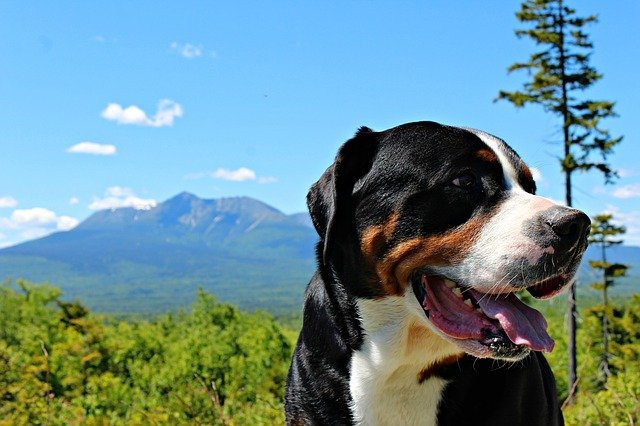 In terms of training, the Swiss Mountain Dog can be a bit more stubborn and should be trained early—food is a great motivator when helping the Swiss learn good behaviors. They don’t respond well to harnesses, unless they’re used for hauling, and tend to pull harder with a harness during leash training.

The Bernese, like the Swiss, is an intelligent dog, but more eager to please its owner. Their affectionate nature makes them more sensitive to negative feedback and separation. They want to be close to the family and will develop unwelcome behaviors if left alone for long stretches of time.

Both breeds require moderate daily exercise. They aren’t ideal for dedicated bikers and runners who like to train with their dogs, but they do make a good match for owners who like long walks or hikes through nature. Both are great camping dogs, and will even pull kiddos and camping gear in a cart.

Both the Swiss and the Bernese Mountain Dogs are relatively healthy breeds, and neither carries any breed-specific disorders. But they are susceptible to health issues that generally affect larger breeds, such as joint problems in the elbows, shoulders, and hips. That said, overall, their orthopedic health is generally good. All large breeds are vulnerable to a life-threatening condition called bloat, as well, but owners simply need to know what to look for.

The American Kennel Club recommends screening puppies for elbow, shoulder, and hip dysplasia, as well as eye health. For the Bernese specifically, AKC also recommends a cardiac check and the Von Willebrand’s (clotting) Disease DNA test. The Swiss Mountain Dog has a slightly longer lifespan, of eight to eleven years, compared to seven to ten years for the Bernese. 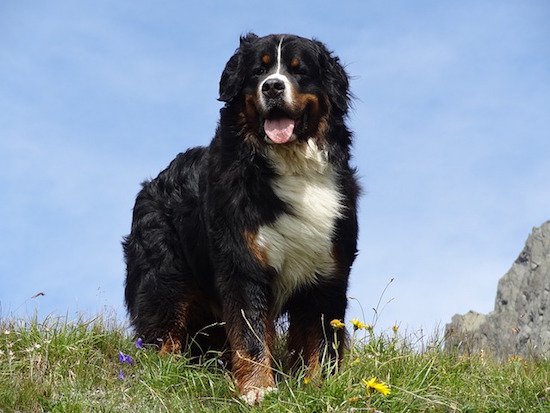 This is perhaps the starkest difference between the two breeds. The Bernese wears a thicker, longer coat, and therefore requires more grooming than the Swiss. The Bernese’s long outer coat and wooly undercoat shed heavily twice a year, but the dogs will, of course, shed continually. The Bernese needs a weekly brushing year-round, and daily brushing during shedding seasons to keep the coat looking shiny and healthy. Because of their longer fur, owners may need to use a metal comb or brush to work out occasional tangles.

The Swiss, on the other hand, demands less in the way of grooming. They are also double-coated, but lower-maintenance. They would benefit from a blowout of the undercoat twice a year during heavier shedding times. Otherwise, an occasional bath and brush keeps the Swiss looking sharp. 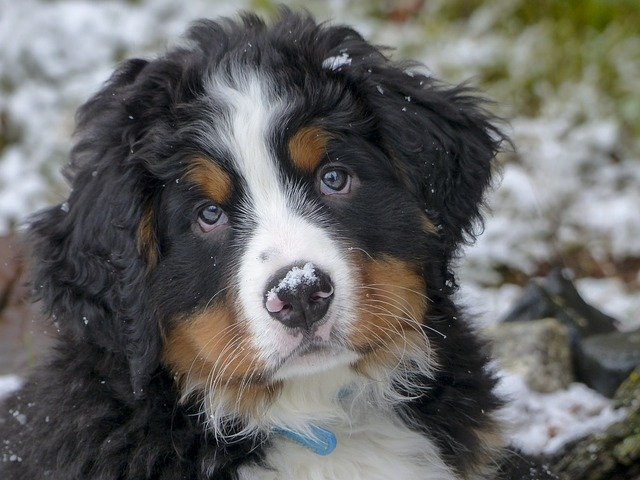 If you’re thinking about adding a Swiss or Bernese to your family, it’s important you understand your own tolerance for large dogs that take up a good bit of space. While neither breed is aggressive, both are physically imposing. The Swiss is more formidable in terms of its guard-dog nature and loud bark, while the Bernese exudes a softer, gentler, more shy personality.

Prospective owners should be committed to training, have a healthy tolerance for “the puppy phase,” and be willing to provide 30 minutes of daily exercise. Both dogs will cost a pretty penny, with the Swiss carrying a slightly higher price tag—both generally fall in the range of $1,500 to $2,400. But owners agree both breeds are worth every penny in light of the devotion, love, and companionship these dogs provide.

And remember, there are plenty of loving dogs in shelters awaiting their forever homes. If a purebred mountain dog isn’t for you, look into dogs available for adoption.