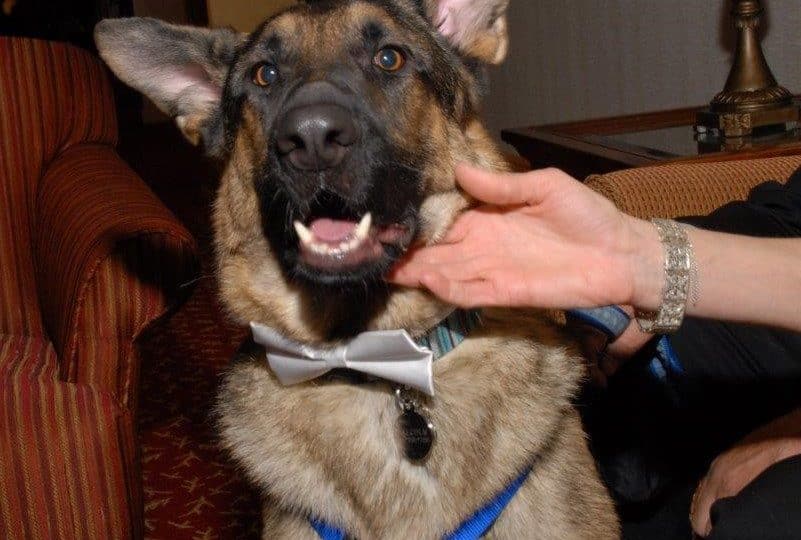 From the day I brought him home from the shelter, Malcolm became my alarm clock, waking me up every morning at 6 a.m. on the nose. He pressed his cold, wet nose against my face until I woke up. He’d stare at me: “Time to go potty.” We would walk down the hallway, turn right, and I’d let him out to the backyard.

On Christmas morning in 2008, I felt Malcolm’s nose in my face, but it was 5 a.m., not the usual 6. “I have another hour, Malcolm,” I said as I rolled over. Malcolm was relentless and kept nudging me, determined to get me up.

I finally gave in. I could see through the slats of the wooden blinds that it was overcast and raining. My husband and the other dogs were sound asleep. I followed Malcolm as he quickly walked down the hall, and I thought I smelled something funny.

But Malcolm didn’t turn right this time. Instead, he turned left and headed over to the kitchen.

He sat underneath the light switch, staring at it. Something was wrong. That smell. He stared at the switch as if to say, “Turn it on now.”

I turned it on and my kitchen was filled with smoke.

We then both ran down the hallway. “Get up, the kitchen is filled with smoke,” I yelled. 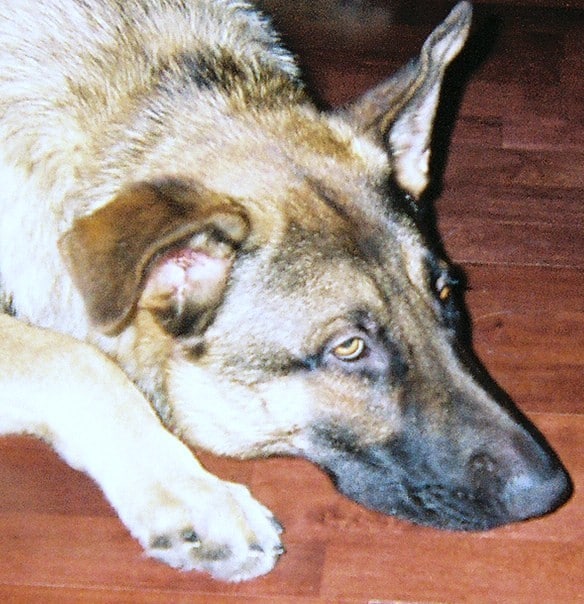 How it All Started: A Forgotten, Injured Dog

We’d met Malcolm not long before that fateful day. When I first saw him, I had no idea that he’d save my life—but I knew I had to save his.

“They’re going to kill him,” I said to my husband Roger after I shook him awake, the morning after we’d first seen Malcolm. We’d gone to bed hours earlier, but I couldn’t sleep. I couldn’t get the German shepherd we’d seen at the pound out of my head.

“What are you talking about?” Roger asked.

“That old German shepherd with the bad leg,” I said. “They’ll euthanize him because of it. We have to adopt him and get him out of there.”

Time was of the essence. We had been to Maricopa County Animal Care & Control (MCACC), the city animal shelter in Phoenix, Ariz., the day before trying to help a woman find her lost dog. Roger and I had been involved with animal rescue and advocacy for some years by that time.

I always got nervous the closer I got to the building. As we pulled up and parked, my stomach was in knots. The pound wasn’t the easiest place to go, but we promised to help. It’s also the first place I tell people to go to adopt. 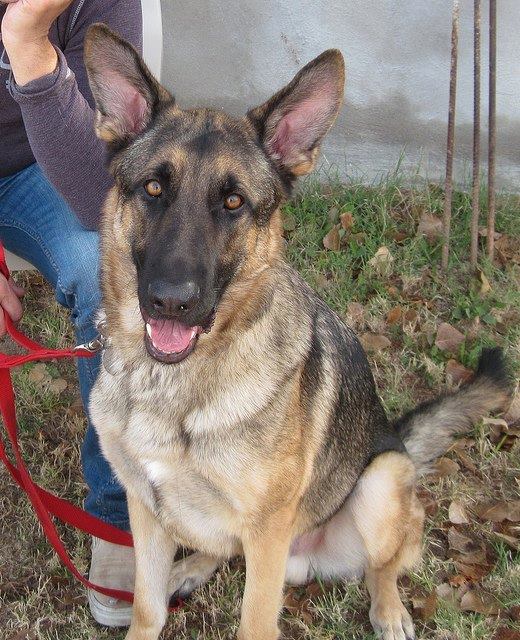 We walked up and down the aisles, dogs barking, sad faces peering out from cages, animals looking hopeless. I always want to take them all home. Every time my eyes fell on a dog or cat who seemed ill, I reported it to volunteers.

But then my eyes fell on what seemed to be the oldest German shepherd in the world. He caught my eye and stared at me forlornly, pleading as he pawed at me as if to say, “Please help me. I don’t have much time.”

When he moved, I noticed something was wrong with his left rear leg. He couldn’t put weight on it. We never found the woman’s lost dog, and we left without the German shepherd who haunted me for the rest of the day, well into my dreams that night.

The next day, I made a phone call to MCACC, gave the cage number and asked about the dog. They said there was no such dog in that cage. I was in a panic, thinking they must have euthanized him. The shelter was closed at the time. My husband went the next day while I was at work to check, found the shepherd, and was petting him as he called me. I breathed a sigh of relief. 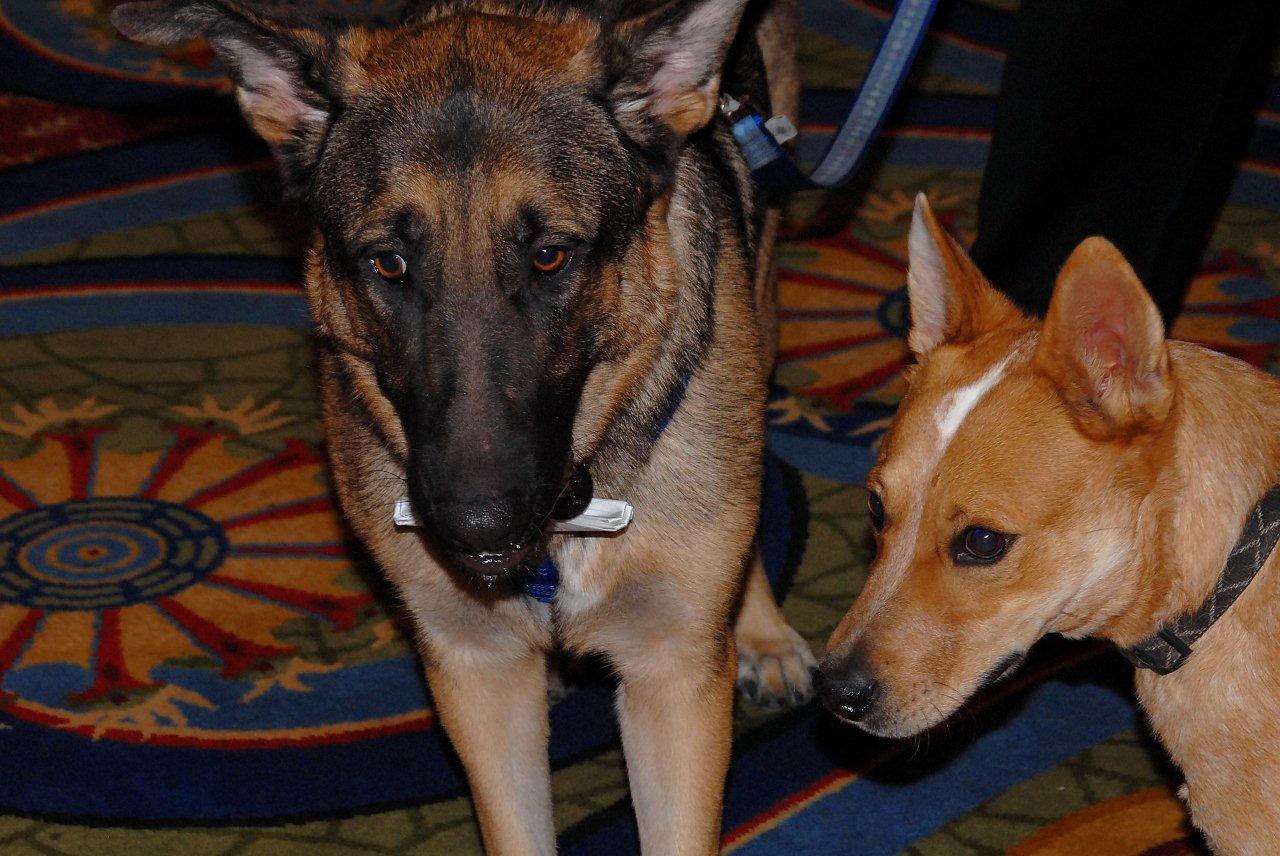 MCACC was due to evaluate him that upcoming Thursday, which is when I called to check. An employee told me that although the dog passed his aggression test, something was wrong with his leg, so he would be put on the euthanasia list. 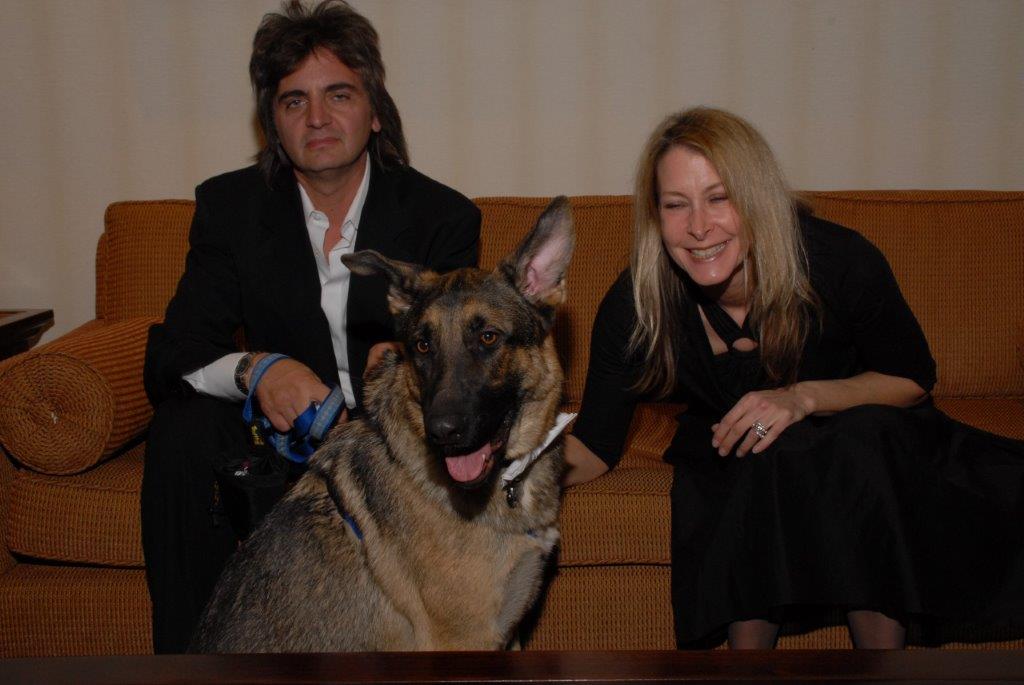 I mentioned I was a board member with Wildhorse Ranch Rescue and wanted to adopt him for myself. I was put on the phone with a supervisor who agreed to let me adopt the shepherd after I begged her. I left work early to fill out the paperwork. I named the dog Malcolm (after one of my favorite actors, Malcolm McDowell) and would pick him up after he was neutered.

The day after we brought Malcolm home, we brought him to our vet, Dr. Steven Thomasson, for a full checkup. We told him that Malcolm had come into MCACC as an old stray who had been roaming the hot streets of Phoenix.

Roger and I sat nervously waiting to hear his diagnosis. Finally, Dr. Thomasson looked at us and chuckled. 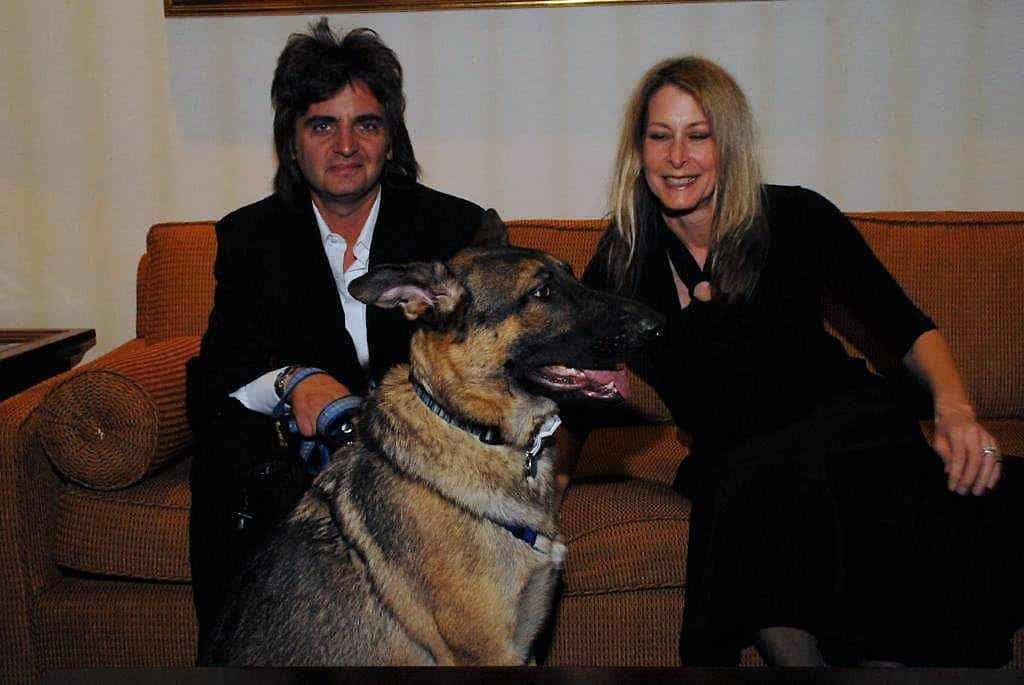 Our mouths hit the floor!

“And, because he’s so young, I don’t think it’s a hip issue,” Dr. Thomasson said, adding that he thought that while Malcolm was out on the streets, he probably sprained his leg. He prescribed an anti-inflammatory and asked us to report back to him in a couple of days. 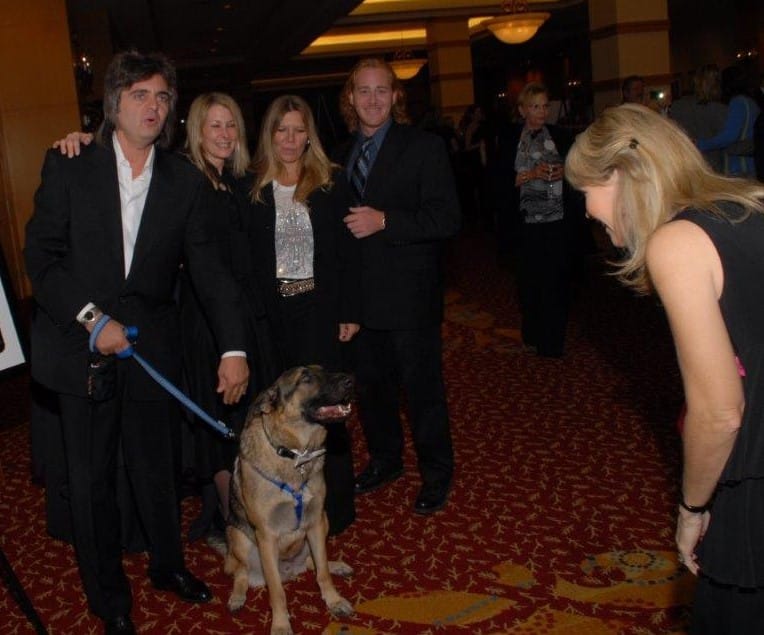 Within three days, Malcolm was fine. He was literally jumping and running without issue.

The dog who we thought was on death’s door turned out to be a goofy German shepherd puppy who loved his new people, our other dogs, and his new life. He was also smart from the start. If you told him something once, he just got it.

Fast forward to Christmas, 2008. After Malcolm led me to the smoky kitchen, we acted quickly.

Roger called the fire department. I got the dogs on their leashes and went out to our backyard while Roger waited out front. I heard the fire engines as they woke the neighborhood. “Oh, the neighbors are going to love this,” I thought.

It took the fire department a while to find the problem. After searching the house, they went into the attic and found that something had fallen on a light fixture and started to burn the wires. At the same time as that, our refrigerator relay blew. But they got to it all in time.

It wasn’t until after everyone left and we caught our breaths that I looked over at Malcolm who sat staring at me.

“Malcolm saved our lives,” I said to Roger. “He alerted us before our smoke detectors went off.”

I then looked over at our dog, “Malcolm, you’re a hero!”

In July 2009, I received a phone call from someone at Friends of Animal Care & Control, the charitable arm of MCACC. They had heard about Malcolm saving us and asked me to nominate him for a “Hero” award. It was part of their yearly benefit. 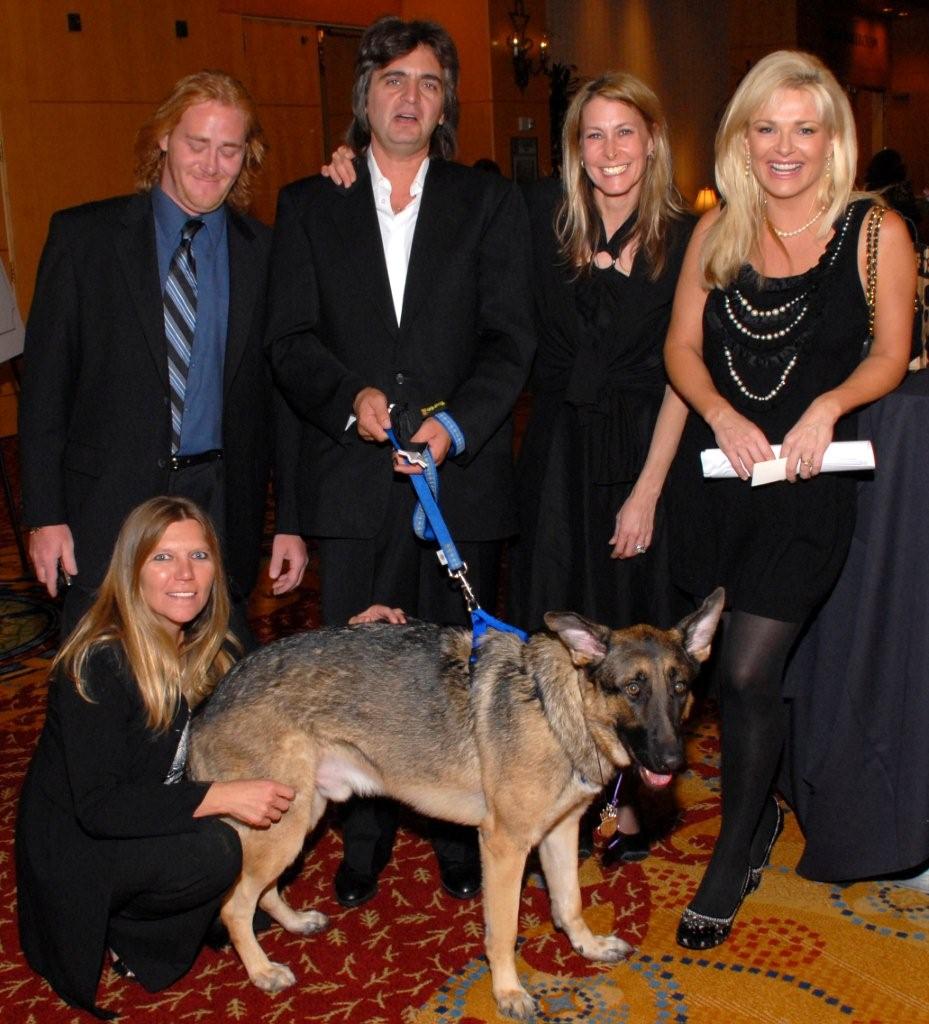 I was notified on Aug. 27, 2009, that Malcolm was chosen as the Lifesaver Hero, and we were all to attend the big event. He was then part of a newspaper article, a video, and on the news.

A Hero Receives His Medal

The awards ceremony dinner took place on Oct. 24, 2009. Malcolm was the Lifesaver Hero among other animal heroes that night. We got dressed up and Malcolm wore a special white bowtie that I bought him just for the occasion.

Malcolm seemed so nervous as we drove to the event, probably because he thought we were going to the vet. After he realized we weren’t, he was fine. Well, except for that one accident after we first arrived, when he had diarrhea all over the hotel lobby. But other than that, he did great! 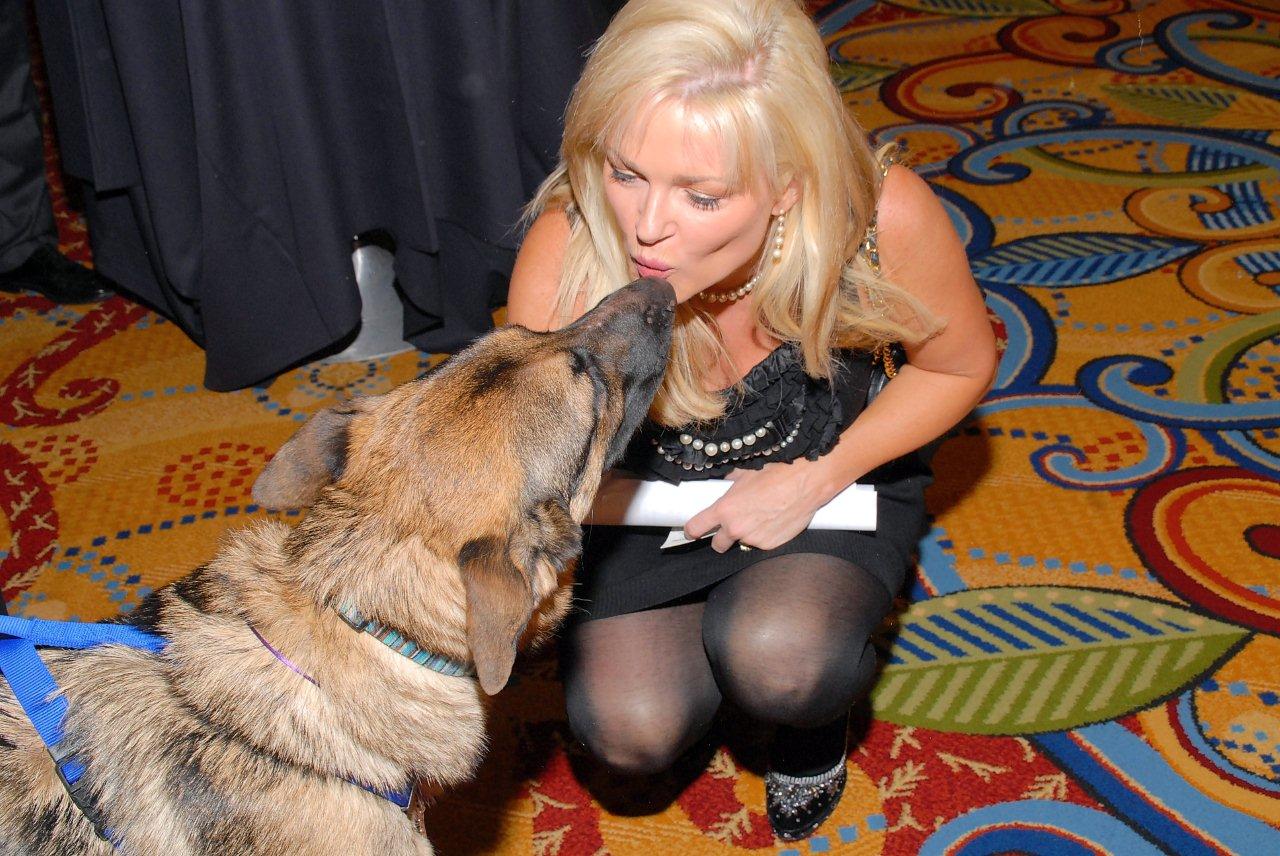 He was the hit of the night. People gathered around trying to meet the handsome and dashing German shepherd who saved our lives. People got in line trying to get a photo with him. Emcee and local news anchor Fay Fredricks even got a kiss.

Later when they called Malcolm’s name and Roger and I walked him on stage to receive his medal, I cried. I was so proud. 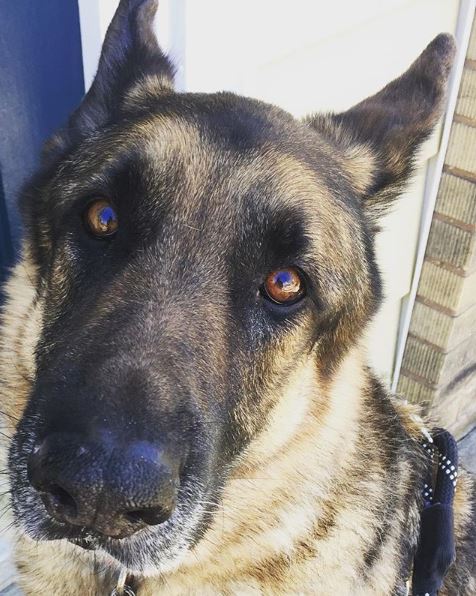 This Christmas will be 10 years since Malcolm saved our lives. Although his muzzle is now gray and his hips are starting to go, I am thankful every day to have him in our lives.

We saved him, and he really did save us that Christmas morning and every day thereafter. 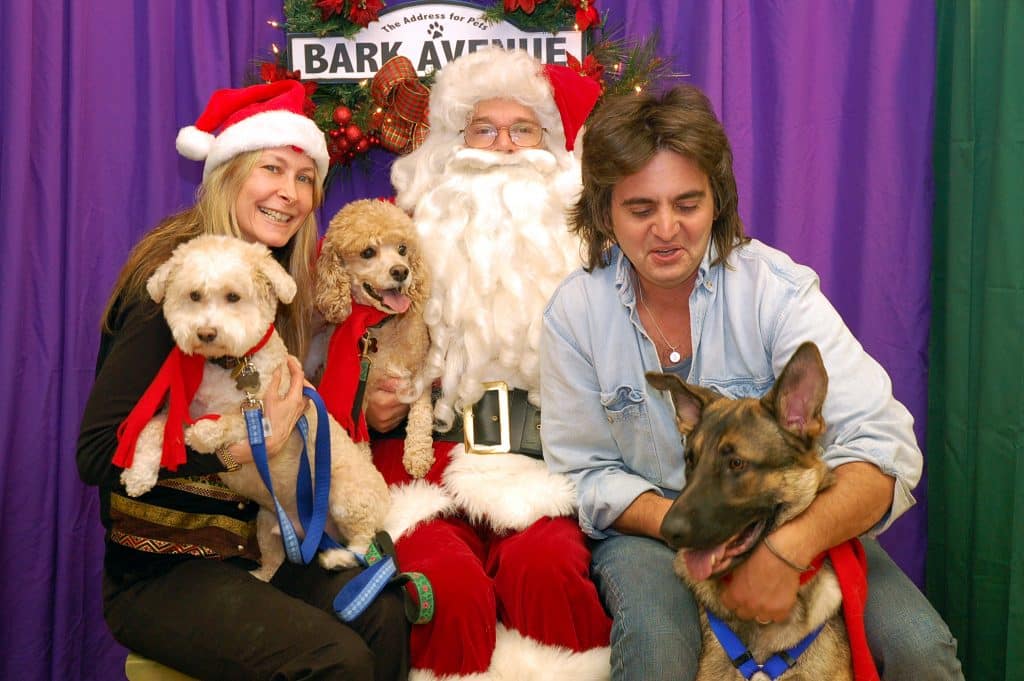