This is the third post in a series of interviews with our team of engineers at Rover. We’ll introduce you to one of our Rover engineers, share their daily work and give you a peek into what it’s like to work for Rover. If you’re interested in an engineering career at Rover, check out the current Engineering positions.

As an infrastructure engineer on the Rover engineering team, Leon uses various tools such as coding and scripting languages to manage the infrastructure that keeps Rover.com running. 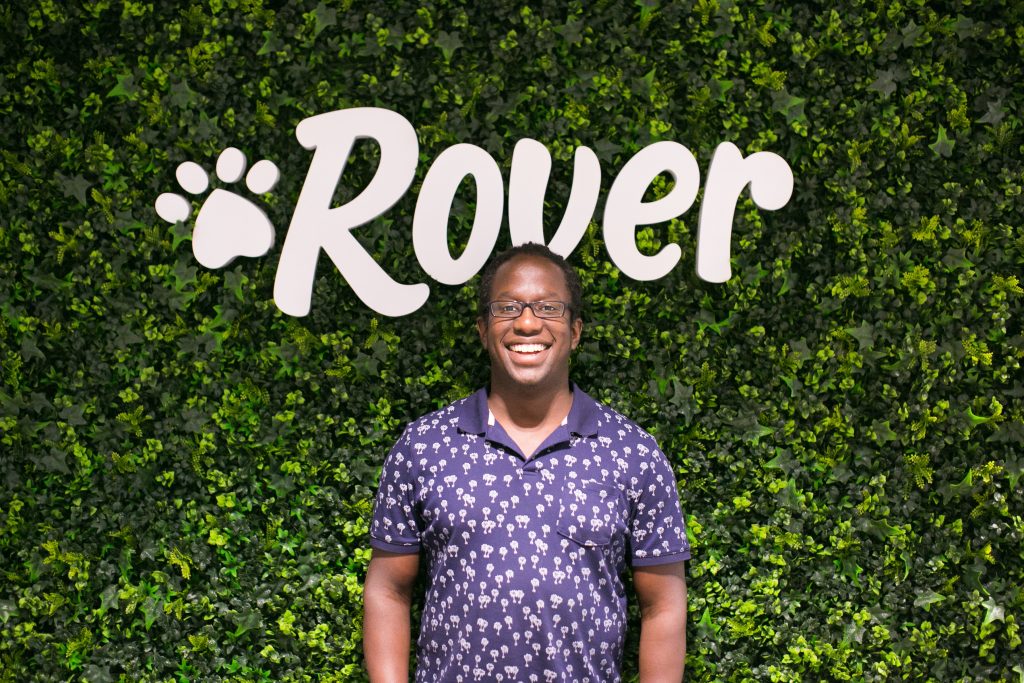 How long have you been at Rover?

Springer: I’ve been working at Rover since December 2017, so seven months. And it’s changing so much! Every Monday, there are new people joining.

Springer: I work on infrastructure, as my title suggests. I work in Terraform, Python and various other tools to manage the infrastructure at Rover that’s running on AWS. It’s a very broad role. We really support developers who are working on a specific product and we tie all of those products together on the AWS infrastructure using coding and scripting languages. We ensure that everything moves on our website and we make Rover.com work!

What’s the name of your team?

Springer: We’re the Jindos. I’ve never seen one in real life. They look like Shiba Inus!

Since you’re one of the newer hires I’m talking to, what attracted you to Rover?

Springer: When I went through the interview process, everyone was extremely friendly and accommodating! The interview process was also challenging so that made me realize they don’t just let anyone in here. I was really drawn to Rover as I feel it’s it’s a fantastic opportunity to match people to take care of their dogs and vice versa.

Springer: When I first started, we did not have a formalized on-boarding process. Our CTO, Scott Porad, recently developed and implemented a two-day tech on-boarding event for new hires. This includes presentations regarding what our teams work on, who to contact if they have any issues, and even little tips like “if you’re working on this piece of code, this is what you should know.” I’m actually speaking at one of these on-boardings tomorrow. I was able to go through it a few months into my role and it was great.

What excites you about your role?

Springer: Being around people and hearing them talk about their Rover experiences. Hearing the things that they’re excited about how they interact with the site and knowing you have a piece of running that back end of everything that it’s running on. Knowing it matters to somebody and it matters to the pet and the owner that this is up and available. That’s the really cool thing when you bring up Rover in public – little do they know all the things I had to do to keep it going! 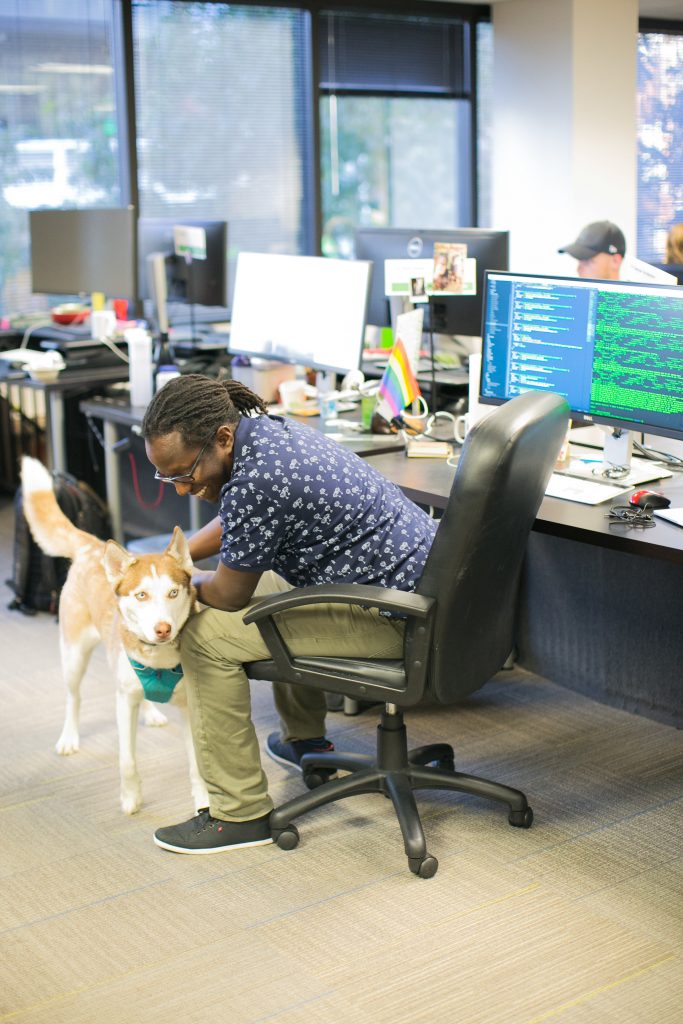 “There’s a high bar for the quality of the code here. As such, those quality standards show themselves in the code that we write.”

Tell me about a recent important project you worked on.

Springer: One of the most recent projects that I worked on was what we call internally, “The Oregon Trail.” Everyone on my team took a big role in pushing that project forward and it’s been a huge project I’ve been working on since I started. We changed AWS regions with only 22 minutes of downtime. In doing this, we realized cost savings and optimized how things were built while updating anything that had been done manually in the past. We also started using the Kubernetes cluster to reduce our overall AWS footprint. So instead of building a bunch of individual instances, we are shrinking things down for cost savings.

Do you think this project passed along any benefit to the customer?

Springer: Yes. What we’re doing is increasing the reliability of the Rover website. We also have a faster ability to increase feature output and provide new features to the customer. Some of the features that we’d like to use weren’t available at all on the region we were on in AWS and now they are.

What’s a technology you are especially excited about and why?

Springer: I think it’s going to be Kubernetes. In this industry, we’ve gotten to this point where we’ve gone from physical machines or servers all the way to virtualized servers. The next step is what  we’re doing now—using Kubernetes to make it easier to deploy and run software and to do so efficiently. We’re really getting to this nice holy grail of computing. We’ll see what happens in the future. We’re also running server-less and leveraging AWS Lambda to see what fits best.

A big trend is automation. How does your team deal with that?

Springer: Actually, one of the biggest things we do is try to find places to automate. We’re always trying to determine things we want to automate, and asking ourselves “are there things left that are being done manually?” We’re really good about being thoughtful about building things in the first place so we avoid a lot of manual intervention steps. Despite all the hiring, we run fairly lean in terms of the amount of people we have compared to the amount of infrastructure we have.

What’s your favorite meeting at Rover?

Springer: I really do enjoy our Beer & Tech meetings when I get a chance to go. However, by far my favorite meeting has been the Women in Tech series that we host in the office. I got to watch one recently featuring a venture capitalist speaker and it was fantastic. She had a lot of really insightful thoughts on the industry and general economy. It’s really cool to have different diverse speakers coming into Rover. 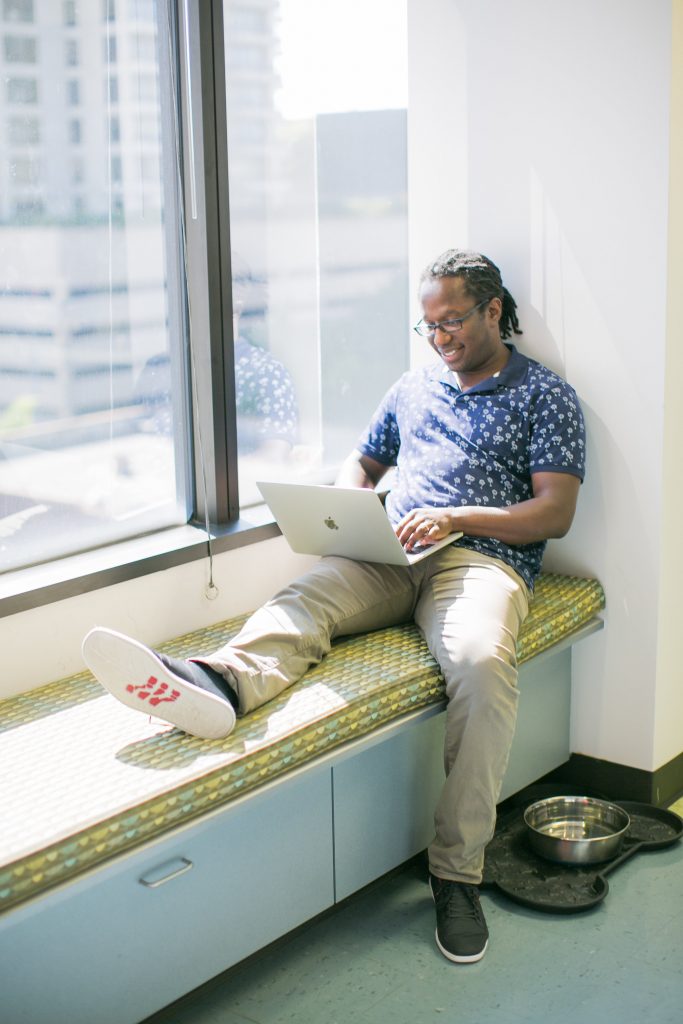 Are you a mentor or mentee?

Springer: My colleague Bryan Shelton has been fantastic in being a mentor to me in a lot of things that I’m not as comfortable at doing. I don’t write a lot of Python all the time and he’s willing to show me what I need to do or change and show me the kind of pattern that we use. It puts me at ease that all my code I’m writing is perfectly fine. It’s a confidence thing – like ugh, nobody’s going to like my code. There is a lot more order and quality control here at Rover. There’s a high bar for the quality of the code here. As such, those quality standards show themselves in the code that we write. I’ve not been formally trained in that field as a software engineer, so it’s kind of nice to know that I’m doing things the right way. And if not, I have guard rails to help me know what needs to be done.

What are some of your passions outside of the office?

Springer: I used to have those, ha! (I have a three-year-old.) The one thing that I’m still doing, which is fantastic, is indoor and outdoor soccer. I’m part of a co-ed league for indoor and a men’s league for outdoor. I get to play that at least every Friday and Sunday and occasionally I will literally come into Rover limping!

How do you unwind after a great productive day at work?

Springer: During the summer, typically what we’ll do is we actually have a really cool neighborhood, so we’ll get everybody fed and then we’ll get them outside and away from screens. We have a good little cul-de-sac where all our neighbors hang out and sit in our front yards and watch the kids. I’ll get up and play soccer with them and I’ll get exhausted and they’re still perfectly fine. I actually like my neighbors!

What do you think is new and innovative in your industry?

Springer: There’s so many things. Actually, a lot of the stuff that we’re doing is cutting edge. It’s very advanced. It bears itself out when we go to conferences. People ask us “what is it that you guys are doing at Rover?” A lot of what we are working on are the technologies that I’m excited about and are big in the DevOps, systems, and software engineering space.

A Day in the Life of a Rover Engineer: Caz Downing-Bryant, Tech Lead
Going Green: Hardening Django Against Third Party Service Outages with gevent
Categories: A Day in the Life
Tags: culture, data, work at rover