This is the second post in a series of interviews with our team of engineers at Rover. We’ll introduce you to one of our Rover engineers, share their daily work and give you a peek into what it’s like to work for Rover. If you’re interested in an engineering career at Rover, check out the current Engineering positions.

As the tech lead for growth and owner acquisition on the Rover engineering team, Caz focuses on bringing in new-to-Rover customers and taking them through their first booking on the platform. 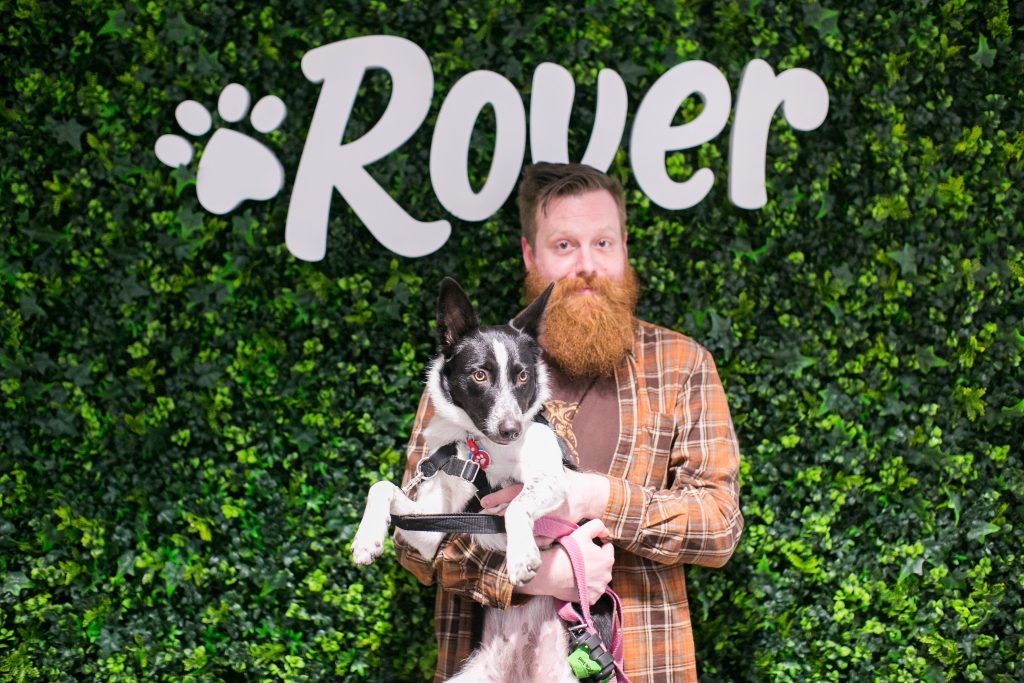 Caz Downing-Bryant with his puppy, Ada

Downing-Bryant: I am the Tech Lead of a feature team called the “Newfies.” We have two types of teams here at Rover: feature and platform. Platform teams set their own roadmaps based on what other teams need, whereas feature teams are tied very closely with product, working with one or two product managers on a discrete set of features. The Newfies are a little odd because the “feature” we focus on is bringing new users to the platform, which is kind of nebulous (in a good way). I would say about 75% of the work we do is guided by the product team and 25% is addressing bugs, technical debt and engineering excellence tasks that we want to get done. A lot of my work is taking ideas and turning them into concrete plans and breaking those plans into small tasks. Then I work with the rest of my team to estimate and help them do those tasks.

How do you start your day?

Downing-Bryant: Depends on if I have my dog, Ada, or not. If I’m bringing her into the office, she goes to the dog park first because she’s a 10-month-old Border collie and she has a lot of energy. If I’m in the mood, I’ll get a tamale from the tamale cart for breakfast. Then I make tea, read my emails and start planning for our daily stand-up meeting. I make sure tickets are where they’re supposed to be, wait for the rest of my team to get in and then we have that meeting. From there, we go do stuff. Sometimes I go to lots of meetings and other days I sit and do work.

What’s exciting about your role?

Downing-Bryant: I love the opportunities I have to help other teammates grow. We have a variety of skill sets on the team. While it’s technically the engineering manager’s job to help with career growth, it’s the responsibility of the tech lead to foster growth via day-to-day work. If I know someone on my team wants to learn more about a subset of our codebase of which a certain ticket deals, I will send it their way and say if they have any questions come talk to me.

Another thing I really like is writing implementation plans. For any large chunk of work, we write out what we’re going to do and how we’re going to do it. It’s ultimately my responsibility as tech lead to make sure those plans are written and vetted, however, on my team we handle these plans via a round robin. We say ‘oh hey, it’s so-and-so’s turn to write the plan’ and I’ll help them write it and vet it, but I don’t have a monopoly on them.

“While I like to think that I mentor everyone on my team, one thing I really enjoy is that I also learn from everybody here…That’s something I like about the culture in general at Rover is that there’s a lot of knowledge sharing, even if it’s not an official mentor-mentee relationship.”

Tell me about a recent project you worked on and how it impacted the customer?

Downing-Bryant: Last year, we launched on-demand dog walking. It originally was a mobile-only experience, however, we built a request form for the web which started out as four long pages. It was very disjointed and it took some time to go through. We realized we could make the form much shorter and more efficient if we decided to combine all the dog details on one page and all the owner’s home details on another. We put out an experiment to streamline that, which I built most of, and that was very successful.

Ultimately, we decided that we wanted the return customer experience to be as easy as pushing a button and getting a dog walk.  That was a really big thing for return customers to reduce that friction and the results of our AB testing showed that it would be successful. They were thinking “don’t make me redo this form again” and we did get a big lift in bookings.

Shifting gears here: what is a technology you’re really excited about and why?

Downing-Bryant: I’m excited about React on the front end, even though it’s been a lot of work for a lot of us. It makes the front end more reproducible, testable and very vigorously engineered. The other thing I’m excited about is Kubernetes, which is where our infrastructure is moving. It streamlines the infrastructure and makes it so that no one is manually configuring anything. Sometimes underlying resources like one of the machines that our code runs on break and Kubernetes will spin up new ones and heal them. 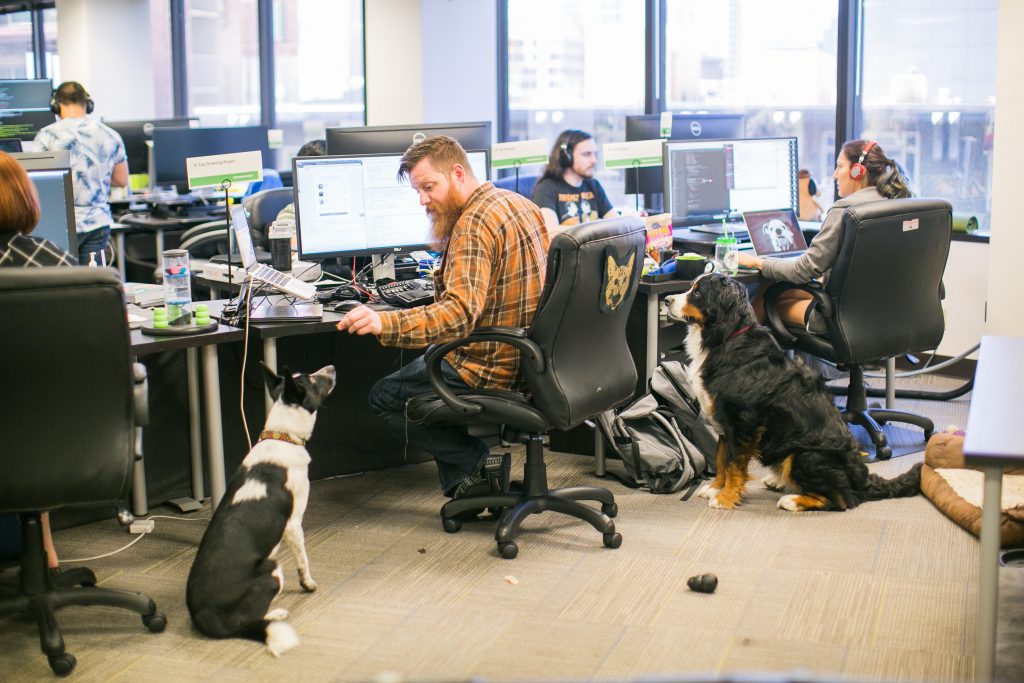 Downing-Bryant entertains the dogs in the Rover office

What is new and innovative in your industry?

Downing-Bryant: I think over the past decade the commoditization of everything has been fascinating. In the past, you’d need to build solutions in house and now there is a third party, service, integration or an open source library library to leverage. That’s exciting for start-ups that a lot of those lego blocks that everybody needs already exist. The other side is that there can be bugs and you might have to be the person to fix those bugs.

Do you mentor anyone at Rover?

Downing-Bryant: While I like to think that I mentor everyone on my team, one thing I really enjoy is that I also learn from everybody here. There are times when junior engineers on my team are teaching me things I didn’t know. That’s something I like about the culture in general at Rover is that there’s a lot of knowledge sharing, even if it’s not an official mentor-mentee relationship.

What’s your favorite meeting at Rover?

Downing-Bryant: My favorite meeting is the estimation meeting, which we have at least once a week. We look at all of our tickets that are not estimated yet and we as a team come up with an estimate for each one. We use this concept called “story points,” which is a set of imaginary numbers that indicate complexity of the task and sometimes represent perceived risk. I have whoever wrote each ticket walk us through it before we eventually end up putting a point value on the ticket.

However, what’s more important is the discussion that happens around the estimation. We’ve got a pretty good culture on my team of writing very descriptive tickets that have a good definition of what “done” actually means. In that meeting we’ll also look at code to assess the complexity of the project; maybe we think it’s going to be really hard but someone remembers there is already a helper method that will do most of the work for us. It’s really good for me as a meeting because one of my biggest responsibilities is making sure things are properly estimated and delivered. But it’s also really a time for the whole team to learn from each other and look at projects in our domain together. It’s been fun watching this meeting get more and more efficient.

How do you unwind after work?

Downing-Bryant: On the weekends, I like to go to the bigger dog parks and walk through downtown Seattle. There are a lot of dog-friendly places taverns around, but I won’t say which! Some places say ‘no dogs allowed,’ also known as, ‘please bring your dog.’ I also volunteer in the gift shop at the Volunteer Park Conservatory and I’m now the secretary for the board of directors. I discovered the conservatory and found myself going there all the time and thought I should just volunteer there. Selfishly, I like air plants (I have almost 100 or so) and sometimes the gardeners there give me some extra offshoots that they have. 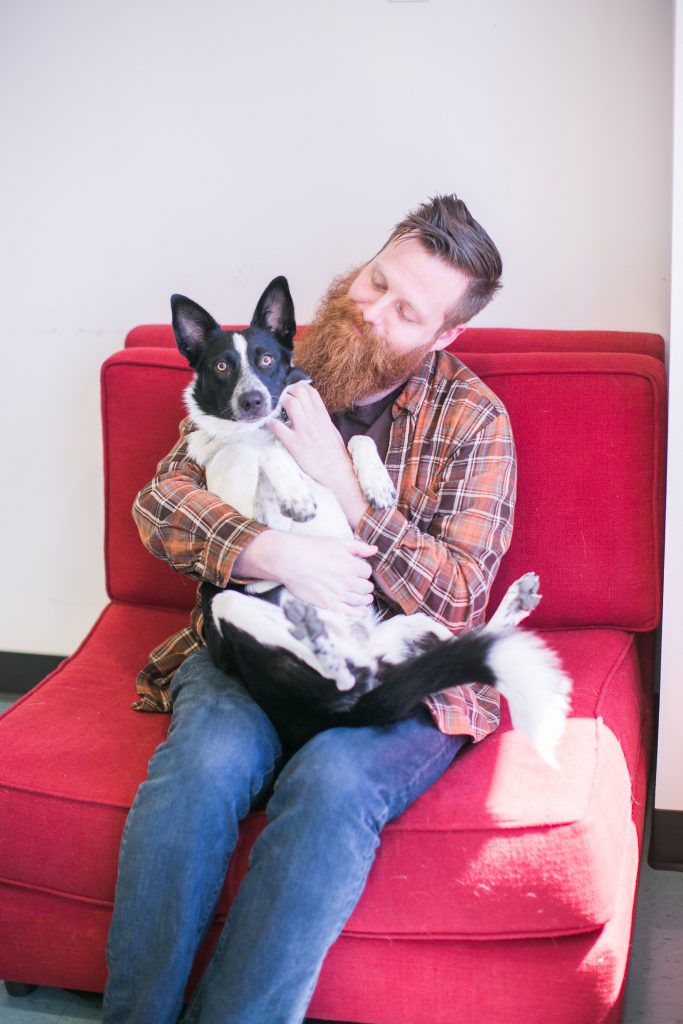 What’s your favorite thing about working at Rover?

Downing-Bryant: I love in the morning when my puppy’s on the couch looking kind of bored, and I say, “Hey Ada, do you want to go to Rover?” and she just runs to the front door and then drags to me work. My favorite part is how excited she is to go into the office. But my other favorite part is the people here. We have a lot of really smart people here but not a lot of egos which is really nice. I learn something everyday and, in turn, I’m able to help other people learn something new every day.

Oh, and I love all the dogs in the office. It was really cool watching the older dogs show Ada the ropes when she was a puppy and now I’m proud to watch her mentor new puppies.