Dogs can hold elected office, it turns out! A recent story about dog mayor-elect Brynneth Pawltro inspired us to sniff out her four-legged mayorial peers. In addition to 7 dogs who’ve served as mayor of their towns, get this list. We discovered Stubbs the cat, who has been Mayor of Talkeetna, AK since 1997 (career politicians, am I right?), a beer-loving goat named Clay Henry, who was the mayor of Lajitas, TX from 1986 until his passing in 1992, and Alice the cow, the mayor of Eastsound, WA. But it’s all about the dog mayors around here. Meet them below!

Brynn, a pit bull, is the fourth dog mayor of quirky Rabbit Hash, Kentucky. She is preceded by Lucy Lou, Junior Cochran, and Goofy Borneman (featured below). Rabbit Hash charges a $1 donation per vote.

Lucy Lou, a Border collie, was mayor of Rabbit Hash from 2008 to 2016. She went on to consider a bid for the presidency, but decided to stay home to enjoy a comfy retirement instead. 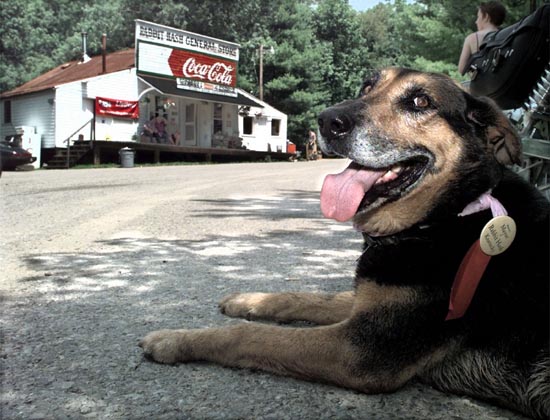 Bosco, a Labrador and Rottweiler mix, was the mayor of Sunol, California from 1981 until his death in 1994. Bosco had a statue dedicated to him in 2008, which graces the Post Office of Sunol.

He is also memorialized with a beer tap at the local watering hole, Bosco’s Bones and Brews.

Duke, a Great Pyrenees, is the mayor of Cormorant, Minnesota, and has been in office since 2014.

A trio of Golden retreivers—Max II and his deputies, Mikey and Mitzi—are now carrying the torch, and are responsible for leading Idyllwild in his majestic wake.