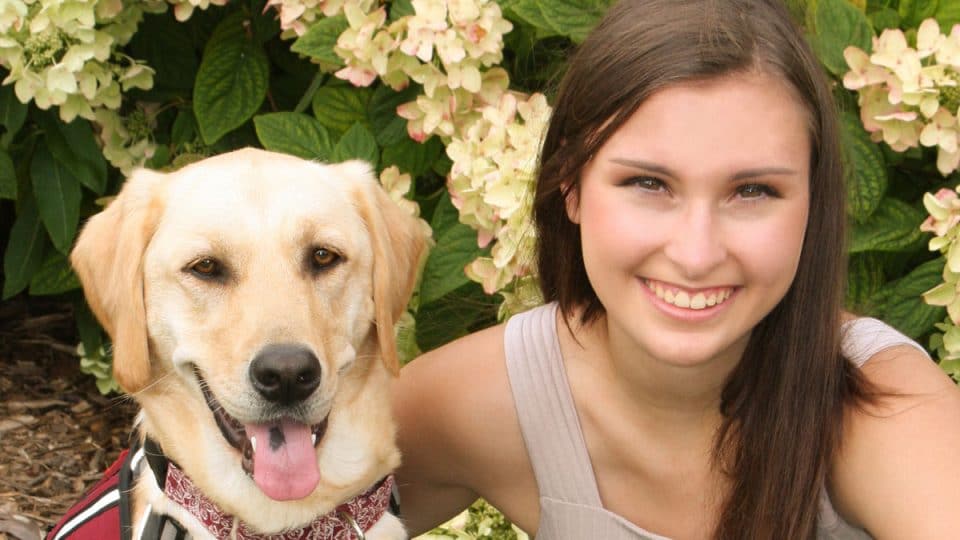 Darby and Abbey Karnes smile together. Photo by Jessica Karnes

Less than a year ago, competitive dancer Abbey Karnes was dancing in a video for about 20 TikTok followers. Then her diabetic alert dog, Darby, interrupted to alert her to a blood sugar fluctuation.

Now Abbey, 18, has a huge social media following, including over 352,000 TikTok followers. She uses her platform to spread awareness about living with diabetes–she was diagnosed with Type 1 at age 12–and service dogs like Darby.

“I like sharing my story and helping others,” Abbey said. “It feels good.” 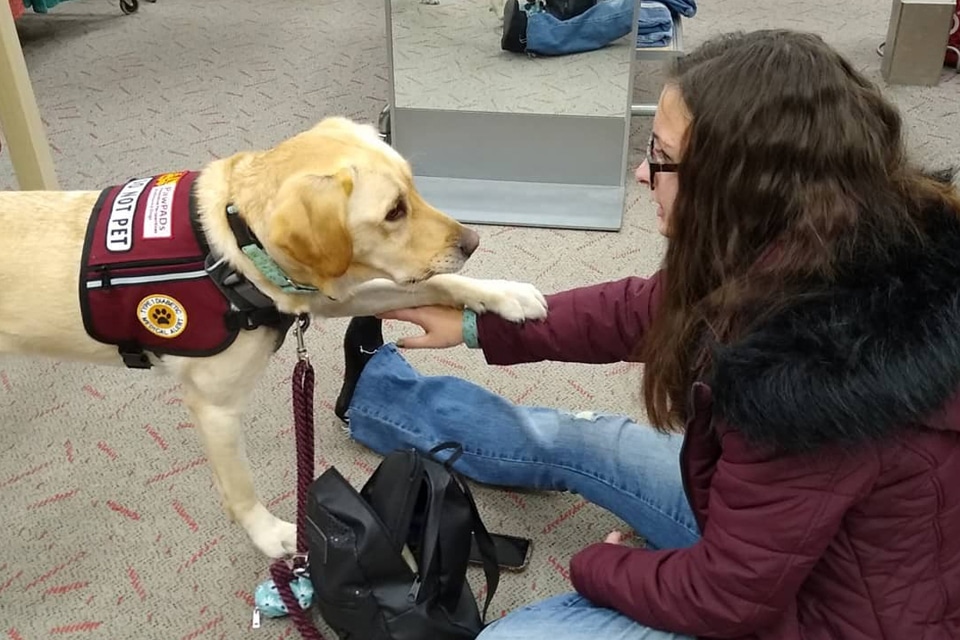 Darby alerts to Abbey’s low blood sugar by pushing down on her hand. Photo by Jessica Karnes

The high school senior partnered with Darby in June of 2020 during a 2-week training camp hosted by Pawsitive Perspectives Assistance Dogs (PawPADs), a nonprofit service dog organization based in Minnesota. PawPADs uses positive training methods, such as rewarding desired behavior with treats and praise, to teach puppies to work in both diabetic alert and mobility assistance.

The service dogs get to choose their job–and their handler. Participants arrive at the camp not knowing which dog will be coming home with them.

Darby and Abbey “immediately clicked.” In fact, after a few days, the Lab/Golden Retriever mix made it clear that she had picked her person.

“Darby doesn’t bark for anything. She doesn’t bark for squirrels or birds–she is a very quiet dog and that’s just naturally her personality. And when they said our time was up with these dogs and put them in their crates, Darby started barking when I left her,” Abbey said. “That’s when everybody knew that Darby chose me.”

The 3-year-old dog is so in tune with Abbey that she often alerts before the continuous glucose monitor (CGM) does. Darby will nudge Abbey with her nose or paw. Then Abbey sticks out her hand.

“She’ll either push it upward with her nose to signal a high blood sugar or she’ll push my hand down with her paw to signify a low blood sugar,” she explained.

Abbey feels more confident about her safety with Darby keeping such a close watch in tandem with the CGM.

“There have been a few times where Darby pretty much saved my life because machines make mistakes,” she said. “They malfunction, they have errors. That’s just what they do.”

In one instance, Abbey and her mom were shopping at Target when Darby suddenly alerted by bumping her. Abbey looked at her CGM and realized it had stopped working–right as she started feeling “weird and shaky.” She immediately sat on the floor in the middle of the aisle to finger prick and sure enough: her blood sugar had plummeted.

“Darby laid on my legs, watching me carefully as I ate my glucose tablets,” she recalled. 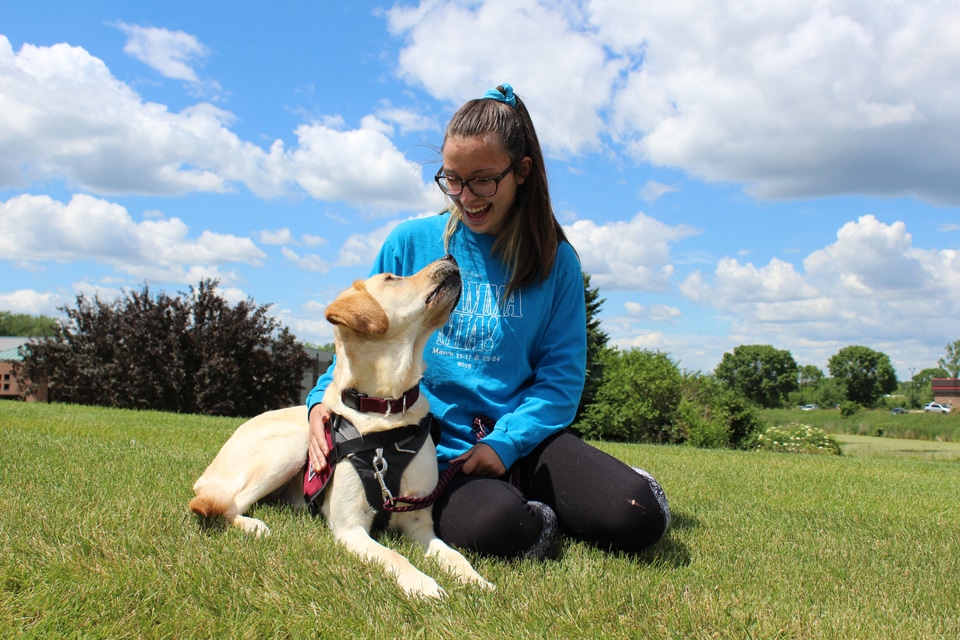 In Close Step With Each Other

While detecting blood sugar fluctuations is Darby’s main job, her mobility assistance training also comes in handy. If Abbey’s blood sugar levels are elevated, it can lead to severe cramping, usually in her arms and legs.

“It’s like a charley horse where your muscle tightens up and you can’t do anything about it. So it’s extremely painful and I can barely walk when that happens,” she said.

If it happens on stairs, Darby is trained on the cue “Step,” so that she takes a step and then braces in case Abbey needs to grab onto Darby’s vest for support. Similarly, the dog stands still and anticipates weight for the cue “Brace,” which Abbey can use if she feels she’s about to collapse.

Darby is also trained to get help if Abbey passes out. She even did it once when Abbey’s blood sugar dropped while she was waiting for her mom to check them into a hotel before a dance competition.

“I was outside and I got very confused,” she said. “I didn’t know what was happening to me. I was trying to find juice but I was so out of it that I couldn’t find it, even though it was right there in front of me. And Darby got very nervous too. Her ears were back and she was walking around trying to find someone to get to me, which we never trained her to do when I’m still awake, so I’m surprised that she made the connection that I needed help.”

Abbey’s levels have been “chaotic” recently, with Darby needing to alert over 20 times a day (typically it’s closer to 10 times each day). Unlike most service dogs who stop working when their vests come off, Darby stays on the clock, even if she’s playing with Macy, the family’s pet English Springer Spaniel.

So Abbey lets her service dog rest as much as possible. In one TikTok video, she cradles the relaxed Lab mix while singing a lullaby she wrote for Darby.

“Her job is exhausting so she is constantly very sleepy and tired. So we do lots of snuggles,” Abbey said. 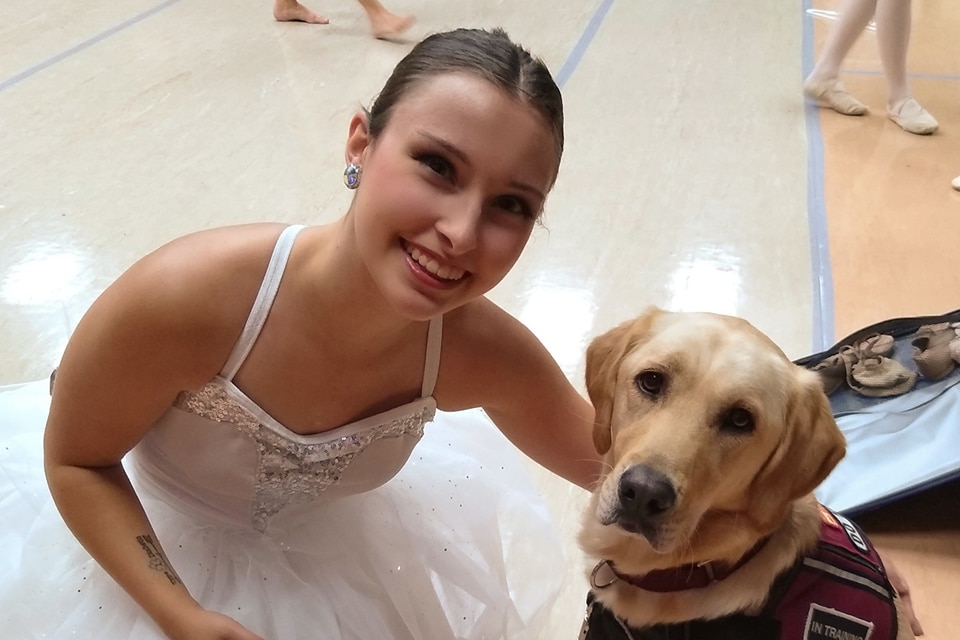 While Abbey loves musical theater and competitive dance, including tap, jazz, lyrical, contemporary, ballet, and acro (an acrobatic genre), she’s also a talented visual artist. She designed t-shirts for the PawPADs line at AngieAndRuby.com, which donates 100% of the proceeds back to the nonprofit that raised and trained Darby (and her brother, Charlie, a service dog partnered with a teen named Ruby), and fundraised for Darby by hosting henna booths at parades and fairs.

She also hosts bake sales for “Diabetic Daisies,” smiling cloth flowers that she donates to hospitals to give to children newly diagnosed with diabetes. Around each stem is a note of encouragement.

“The year that I was diagnosed, it was very scary–overwhelming–and my life was pretty much turned upside down,” she said. “I want to give those kids reassurance that it does work out.”

Of course, one way things have worked out for Abbey is her partnership with Darby. She recommends service dogs to people with diabetes because her experience has been so positive. She feels so connected to Darby that when they’re separated, she feels like she’s “missing a part of me.”

Visit Abbey and Darby on TikTok: @abbey.n.darby or Instagram: @alertdogdarby 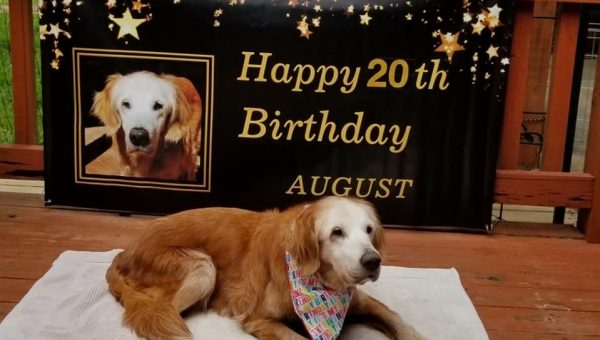 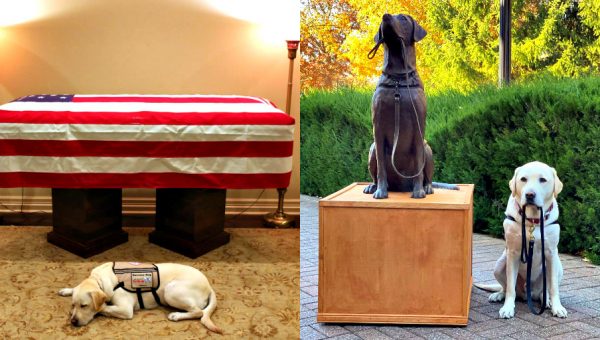