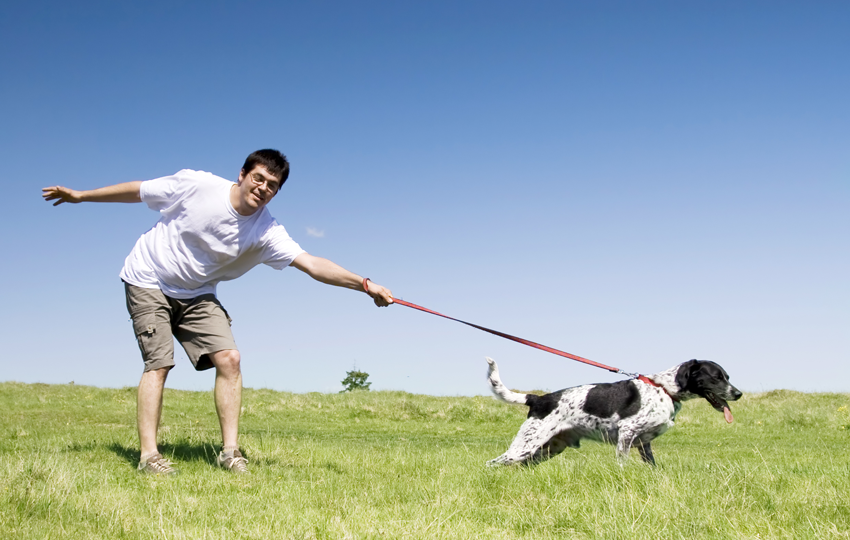 Help! My Dog Pulls Too Much on Leash

I have a Border Terrier who is constantly out on the end of the leash way in front of me. It’s killing my shoulder! Is there certain equipment I can use to keep him from pulling, other than a prong collar? The only thing that has worked so far is a prong collar, but I don’t really like the idea that the prongs are continually poking into his neck! Please advise.

Ah, it sounds like you’re looking for a product, that, like a magic wand, will cure pulling… good luck with that, sister!

Recently, a client came into the School For The Dogs shop and was disappointed that we didn’t carry leashes with more cushioned handles. Her dog, she said, pulled so much that he often cut off the circulation in her hand. Didn’t I have a leash that could keep her hand from getting crushed?

I felt bad disappointing her, but I admitted we didn’t carry any leashes designed to make pulling easier on the hands. At School For The Dogs, our approach is to keep a dog from pulling in the first place, and a fancy leash isn’t a tool that will prevent pulling any more than buying a treadmill will cause you to lose weight.

In both cases, purchasing the right tool isn’t the issue: using it properly is. 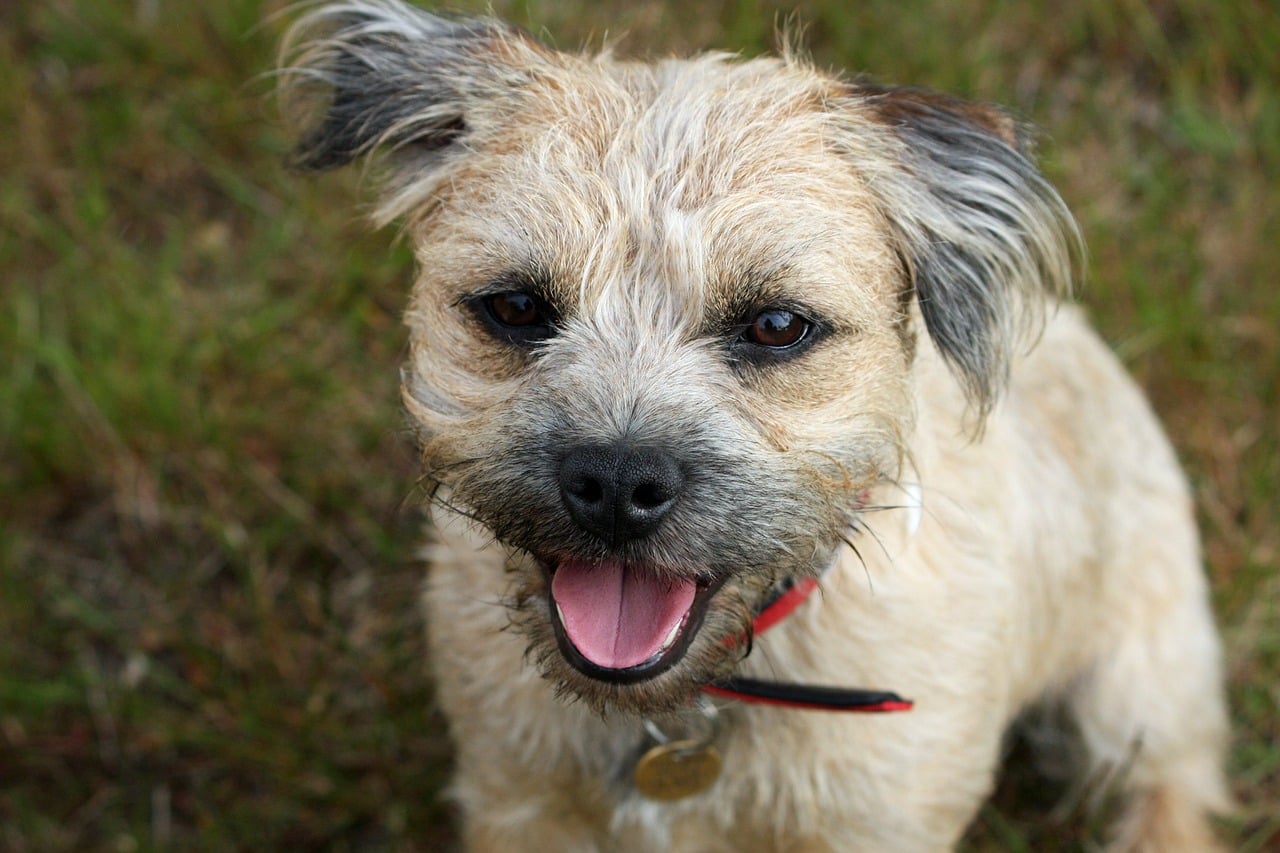 How to Train Your Dog Not to Pull on Leash

Training before tools! In my opinion, our goal should be to teach our dogs to want to walk by our sides, not to force them there using hardware. Sure, certain pieces of gear may prove beneficial, if used correctly, but they aren’t usually my first line of attack.

When you do rely on a product for help, it should ideally be used to encourage a desired behavior rather than policing a disliked one. So, before I go into specifics on “tools,” I suggest trying the following three things on walks.

If your dog is focused on keeping up with you, he’ll be less focused on trying to get ahead of you.

If your dog thinks you always walk straight ahead, he is more likely to be out in front of you. Turn him into a vigilant backseat driver by being unpredictable! Once you switch directions, your dog will go from being in front of you to in back of you…Clever, right?

Get in the habit of making swift, unpredictable turns and your dog will be forced to pay more attention to you, which means less attention will be spent trying to get out as far in front of you as possible.

Outside, you’re probably less interesting than pretty much everything that is going on. Do you think he’d rather spend time with the human he sees hours a day, or that discarded chicken bone over there? You can build your interest-factor by becoming a periodic dispenser of good things as soon as you hit the sidewalk.

Here’s the thing. You don’t have to reward him for walking well; approach it from the point-of-view that if you focus on rewarding him for other stuff, it’ll result in nice walking without you even having to focus on it.

For instance: Reward your dog any time he looks at you. This might mean giving him a treat, or just praising him, or even whipping out a toy. You can also pick some arbitrary marker and reward him whenever you come upon one, like every fire hydrant you pass or every red car you see. 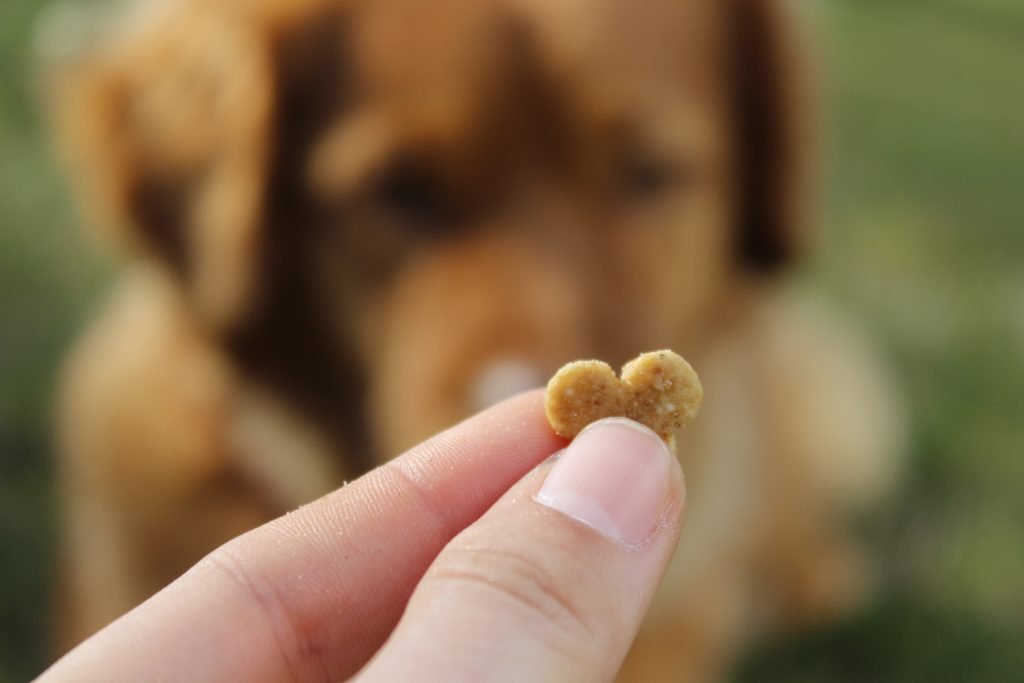 It’s important that you deliver your reward to your dog where you want your dog to be. Usually this is by your knee, hip, or ankle, depending on your height and your dog’s size.

My favorite method for rewarding dogs outside is using a lickable treat. That usually means liverwurst, cream cheese, or peanut butter in a liquid treat dispenser, or a LeanLix, which is a hard treat that comes in a deodorant style tube, or a BarkPouch, which is a lickable treat in a baby-food style pouch.

End the Game of Tug

When someone pulls or pushes you, you will usually be inclined to push or pull against the pressure being exerted upon you. Dogs are the same. (Many trainers explain this with the term “Opposition Reflex,” although it technically might not actually be a reflex).

That means if you’re holding a leash that has any tension on it, you’re engaging in a tug of war whether or not you mean to. It’s exerting force on you, and vice versa.

So, don’t blame the dog: He may be winning the game, but you’re still participating! Even if only one of you is working to exert pressure on the rope to the point where it’s taut, the other one is exerting pressure by default. Otherwise the leash wouldn’t be taut. If there’s at least one side that isn’t participating, then it is, at best, a one-sided game, which is…not really a game. And really, that’s the goal: NOT playing a game of tug.

Release Pressure on the Leash

Ideally there should always be a nice bend in a leash. Relaxing your leash pressure will also take some strain from your arm and shoulders, and help relieve the pressure on your dog’s neck. Strain on the neck can lead to trachea issues with dogs (especially small ones).

Loosening up on a leash can improve your dog’s relationship with other dogs, and with you. If the leash is taut and tugging at your dog’s neck, there is probably some degree of discomfort your dog is feeling at his throat, whether or not that is your goal.

This can backfire. Too often, dogs won’t associate the pain with its actual cause, and instead, they’ll think it’s being caused by whatever is in front of them. They are likely to blame the choking on whatever they’re pulling towards.

Training comes before tools! Preventing pulling is more about training your dog (and yourself). Remember to walk quickly, switch directions, use rewards frequently, and to loosen up on the leash.

That said, a good leash is an important purchase. Stay tuned for my tips on selecting a leash and harness.