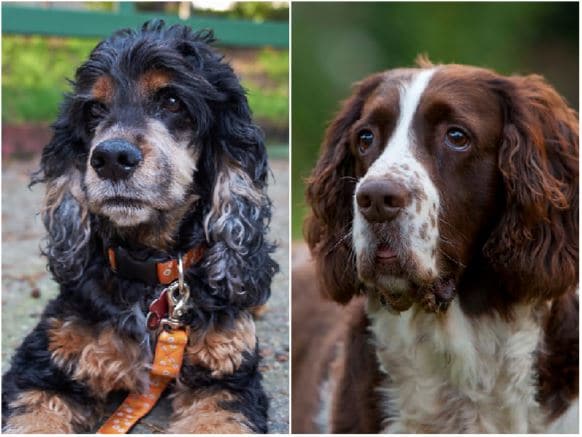 If you’ve fallen in love with spaniels, we can’t blame you. Between their floppy ears, big puppy dog eyes, and sweet dispositions, it’s pretty hard not to love the spaniel family of dogs.

But if you’re considering turning your fondness for the dogs into something a little more long-term, it’s important to figure out just which type of spaniel has captured your heart. After all, the AKC recognizes at least 15 spaniel-type breeds—and they’re all just a little bit different.

We’re going to look at two of the more popular spaniel-type breeds—the cocker spaniel and the springer spaniel—and see just what sets the two apart from each other. If you pay close attention, you just might find the perfect spaniel for you along the way.

Their names may give it away a bit, but both the springer spaniel and the cocker spaniel can trace their histories back to Spain.

The two have a very similar heritage, with both bird-hunting breeds working as hunters’ helpers before guns were invented in the 17th century, according to the American Kennel Club. When hunting with rifles became popular, both breeds continued to find purpose in the sport and eventually became known as “gun dogs.” 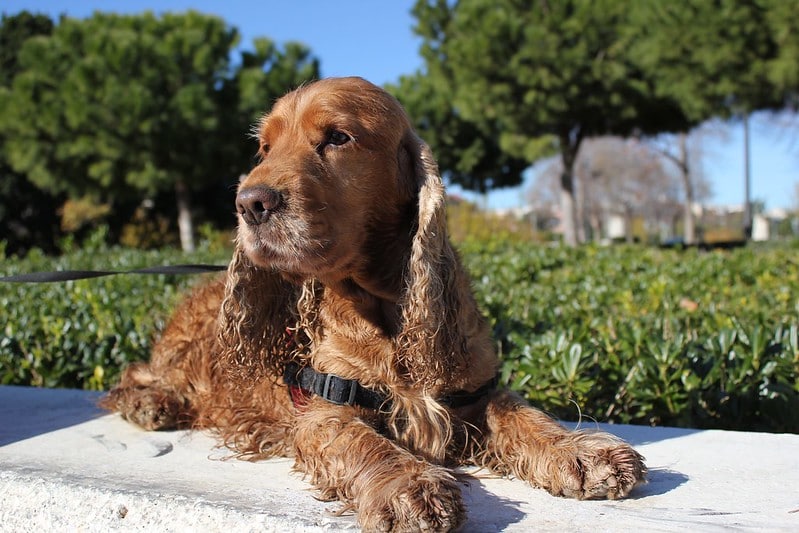 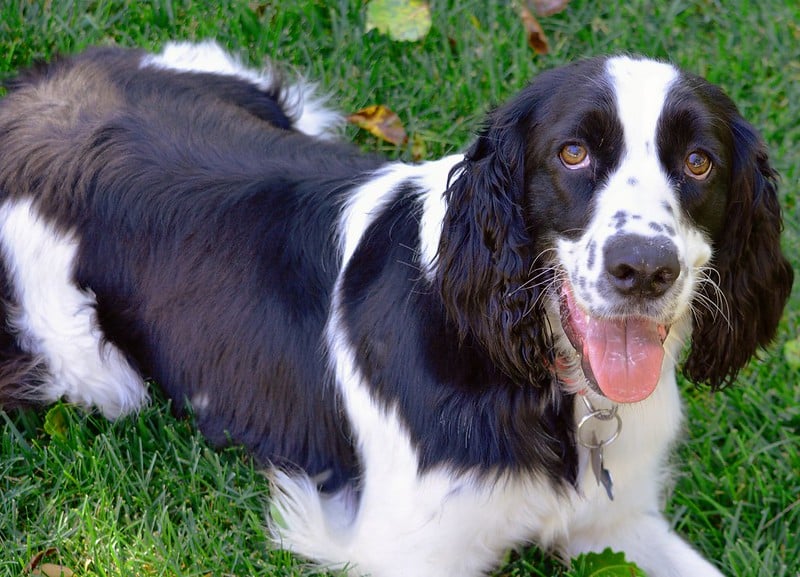 Early in their history, spaniels were only classified as “land spaniels” and “water spaniels,” and both springer and cocker spaniels were of the land variety. At first, there was little designation between the two breeds. In fact, sometimes both types of spaniel were even born in the same litter, something that took generations of intentional breeding to sort out.

Around the 19th century, dog owners became interested in purebreds, and the AKC created different breeds of spaniels. One of the newly created spaniel breeds was the springer spaniel, named for their ability to find birds hiding in thick brush and “spring” them out of hiding. Similarly, the smaller cocker spaniel was named for the small woodcock variety of birds they were known for hunting.

At first glance, the cocker spaniel appears to just be a smaller version of the springer spaniel. Upon closer inspection, though, there are a few more differences, though they’re subtle. 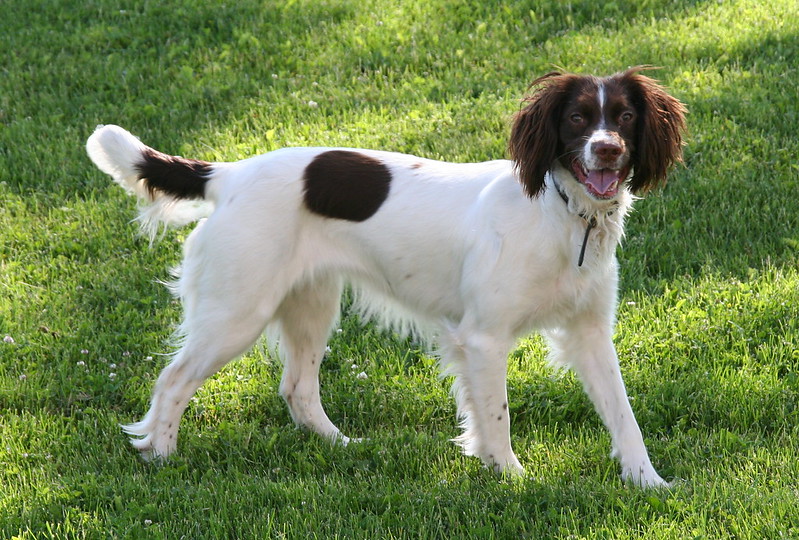 It’s not just their size that sets them apart from each other, though. Another noticeable difference in the breeds is in their famous coats. While both sport gorgeous, curly locks, the cocker spaniel tends to have longer, fuller, and fluffier hair. Springer spaniels have shorter fur across their bodies, with feathered hair under their chests and legs.

Both breeds have a wide range of possible colors and color combinations, but only the cocker spaniel will appear in solid colors.

Since they have a longer, more feathery coat, it makes sense that the cocker spaniel would require more regular brushing. In fact, it’s best to brush the cocker spaniel thoroughly every day. Once they develop mats and tangles, it’s nearly impossible to avoid having to cut them out.

Springer spaniels, on the hand, need only weekly brushing, and the only frequent trimming required is around the head and under the tail—a task that’s easy enough to accomplish without enlisting professional help. 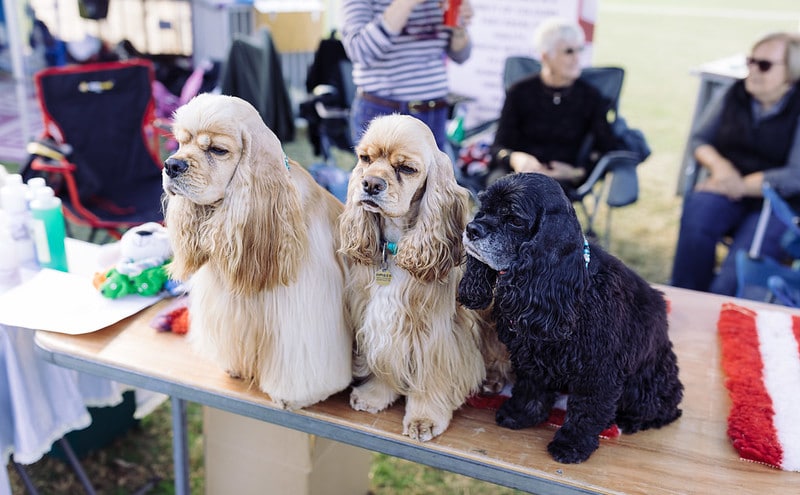 When you picture a dog with perfect behavior, you’re probably thinking of the traits that are fairly common with both cocker spaniels and springer spaniels.

They’re both loyal, eager to please breeds, with good manners and generally happy dispositions. And both can go from faithful companion to working dog in a moment’s notice.  What’s not to love?

Cocker spaniels and springer spaniels are both also smart and highly trainable, though they are both sometimes easily distracted. Use treats and praise—not harsh words or actions—for the best results from both spaniels.

The energetic cocker spaniel will be happiest with an activity to keep her busy, which can range from a simple game of fetch to agility training. Springer spaniels are curious and always ready to explore, so continued training is advised with this breed.

The major difference between the two breeds in this area is their ability to be left alone. While the cocker spaniel will probably be fine if left alone during the day (after proper training), the springer spaniel tends to suffer from separation anxiety, and shouldn’t be away from his people for long periods of time. 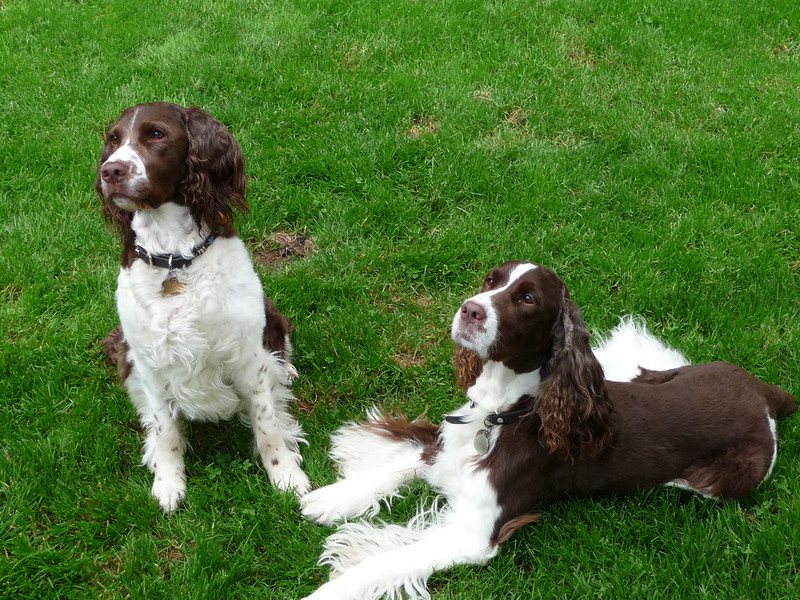 Since they have such a similar heritage, it shouldn’t come as much of a surprise that the cocker spaniel and the springer spaniel have similar health risks.

Both breeds are susceptible to hip dysplasia. Cocker spaniels also may suffer from dysplasia of the knee, while it tends to affect the elbows of springer spaniels. They’re both also predisposed to eye conditions.

Thanks to responsible breeders who utilize careful genetic testing, many of these issues can be avoided. Still, it’s important that both types of spaniel get regular checkups with a veterinarian, just to make sure they’re still in good shape.

There’s just something about spaniels—we get it.

They’re regal, classy, gorgeous dogs, and they’re usually on their best behavior. But even with all those desirable traits, cocker spaniels and springer spaniels may not be the perfect dogs for you. Or, it’s possible that one of the spaniel breeds is a better fit than the other.

The cocker spaniel is smaller, so it works a lot better as a lap dog. It takes a lot of work (and sometimes a lot of money) to keep up with their fancy hairstyles though, which is something potential owners should be prepared for.

The springer spaniel requires less maintenance, but it also takes up a lot more space—something that might matter a lot if you live in cramped quarters.

Either way, bringing a new dog into your home is a huge decision that shouldn’t be taken lightly, no matter which breed you choose.

Neither breed of spaniel comes at a cheap price, either. AKC-registered breeders list both cocker spaniel and springer spaniels for between $700 and $2,000.

Of course, there are also AKC-approved rescue organizations for both springer spaniels and cocker spaniels. Through these groups, you may be able to match yourself with a puppy or adult dog of your chosen breed—sometimes at a lower cost.

Purebred dogs aren’t for everyone. If these spaniels (or their associated costs) aren’t a match for you, remember that there is always an abundance of shelter dogs waiting patiently for their forever families.