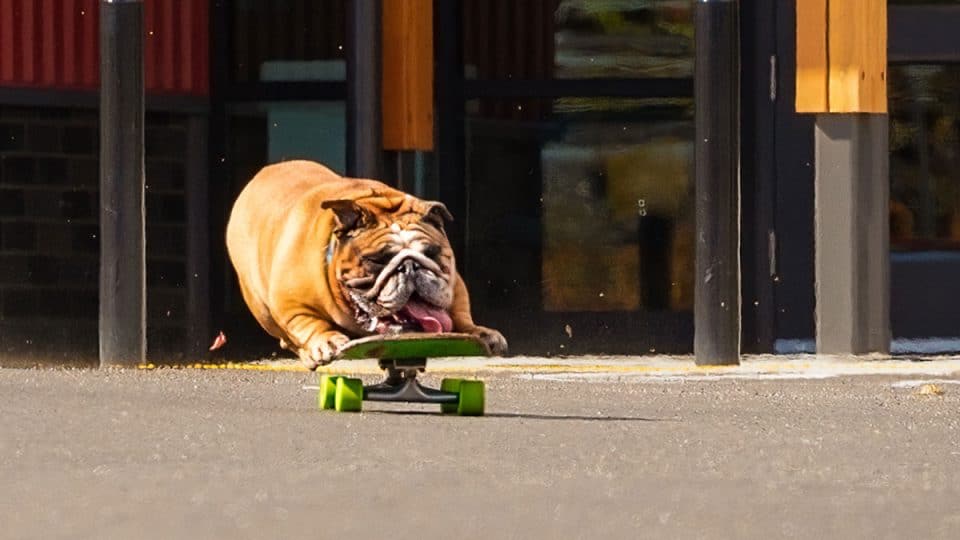 A 6-year-old English Bulldog named Chowder has become a social media star for his skateboarding skills. According to his social accounts, the “cool little dude living his best life” has 1.6 million followers on TikTok and 175,000 on Instagram.

♬ Wipe Out – The Surfaris

A Different Kind of Bulldog

Chowder lives with his family on Fox Island in Washington state. His mom Jani Delperdang adopted him when he was just eight weeks old. She’d had Bulldogs in the past and expected Chowder to be a cuddler like the others had been.

“He was just really different,” she said. “We’ve never had a dog like him before, not super affectionate.”

But Chowder always wanted to play.

“He just had to have a lot of physical activity,” said Delperdang.

Because she worked remotely, Delperdang took Chowder out several times a day to play with toys, but even with all that activity, Chowder seemed bored.

“Almost like he didn’t like doing the dog stuff, “ said Delperdang. “Quite honestly, for the first two years, we really weren’t sure what to do with him.”

She worried that Chowder was depressed.

“I was literally looking for neighbors to play with him, because, again, he just looked bored. You know, you can tell a happy dog from a not happy dog, and he just wasn’t.” 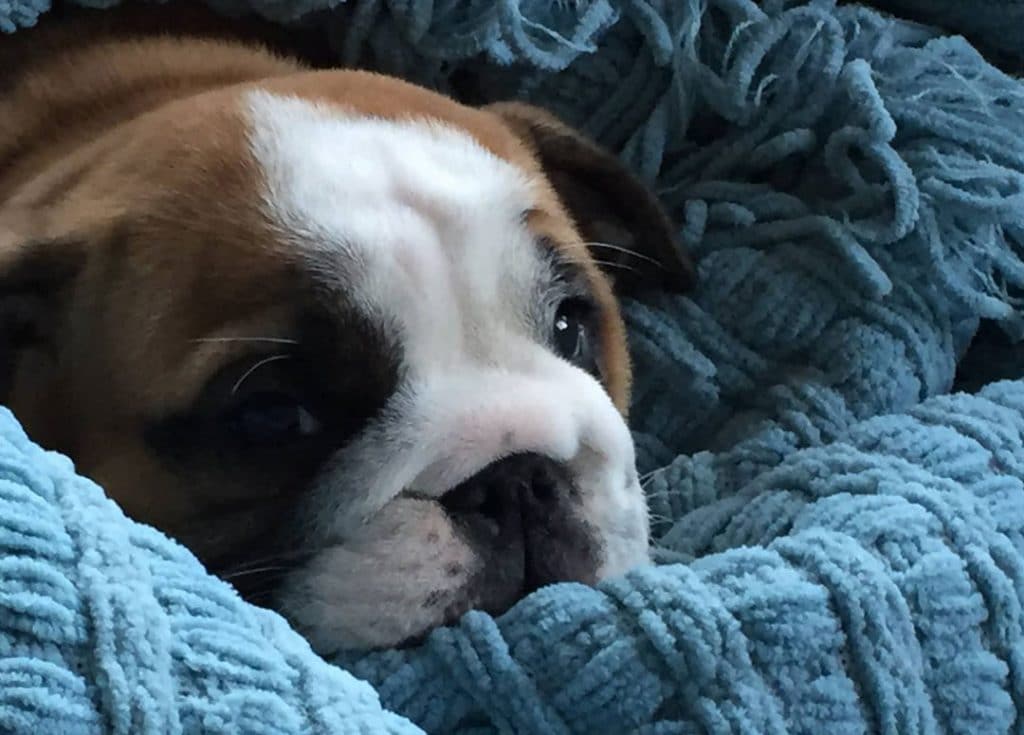 Chowder as a pup. Photo courtesy of Jani Delperdang

When Chowder was about two years old, he was at the beach in Oregon with Delperdang and her daughter, and there was a boy with a skim board.

“Chowder had never seen a skim board,” said Delperdang. “We just happened to be walking by when [the boy] flung it and Chowder hijacked it, and he jumped on it and started riding.”

“It was just the craziest thing ever,” she said.

A crowd gathered on the beach to watch Chowder as he skim boarded for another 20 minutes.

“It was just instinctual, you know?” said Delperdang.

When she got home from that weekend trip, Delperdang got Chowder a skateboard right away.

“Within five minutes, I could tell he was just obsessed,” she said.

Chowder had found his passion.

♬ BRENT MORGAN What Dreams Are Made Of – Brent Morgan

“He completely changed, like he needed that,” she said.

Chowder began by rolling around the driveway on his stomach.

But Delperdang said he soon got bored with that.

“So we thought maybe take him to a parking lot or something,” she said. “So it was immediately after we did that, that he just started standing up and then riding hills.”

“He loves hills and he loves speed,” said Delperdang. “We have to be careful of that though. We don’t let him ride anything too fast. You learn you can’t take your eye off away for even a minute.”

And he’s skilled at adjusting his body to take a corner.

“He really likes the turning part, that’s like his fun,” said Delperdang.

Chowder is now a skateboarding perfectionist.

“If he has a run where he fell off, we have to go back up and have a good one before we leave,” said Delperdang. “He understands the concept of practice.”

Hi friends. Chowder lives for his skating time. A mini-vlog about our practice session today. Our focus is on making sure he is safe & having fun. Please watch our skate safety video & this video about how Chowder stops. @chowderthebulldog Additional safety notes in pinned comments. #skate #skateboarding #practice #familytime #adventurevibes #puppiesoftiktok #dogtok #weekendvibes #vlog

Safety is a priority so Chowder only skates in empty parking lots and areas where there are no cars.

“We’re really very limited in the places we take him,” she said. “And there’s so many fun places we’d love to, but it’s just not safe.”

Want Your Dog to Skate? Don’t Push It

Delperdang said she doesn’t have any particular advice for people who’d like to teach their dog to skate.

“I don’t want to tell people, don’t do it or whatever, but we kind of think it’s like [the dog] kind of wanting to or not,” she said. “I mean, we definitely helped Chowder improve and everything, but we’re more like his assistants.”

Delperdang moved the board around for Chowder to get him to a good starting place and let him spend a lot of time practicing.

“But we never had to incentivize,” she said. “Our big thing was trying to get [the skateboard] away from him because he never wants to quit.”

“It’s just kind of like don’t push them, make sure they’re having fun,” she said. “Keep the training sessions short, you know, make it a special thing.”

Chowder was able to try snowboarding last winter and now his goal is to learn to surf.

So Delperdang ordered Chowder a wetsuit.

“And obviously his life jacket,” she said. “We’re going to teach him this summer.”

Because of their stocky build and low center of gravity, Bulldogs are well suited to skateboarding. Walter and George are two other superstar Bulldog shredders, but there are other speedy breeds.

Fun fact: Walter is one of the stars of an upcoming feature film called “Powder Pup,” about a snowboarding Bulldog and his friends, scheduled for release in 2023.

Fun fact: Darrel plays hockey and is the office dog and advocate for the Washington State Chapter of the Alzheimer’s Association. Darrel is also an ambassador for the Walk To End Alzheimer’s.

Fun fact: Rowdy skates in skateparks and has been a competitive runner since she was 4 months old, winning multiple Wiener dog race titles.

Fun fact: Hilo loves going hiking and adventuring in the woods and on the beach. 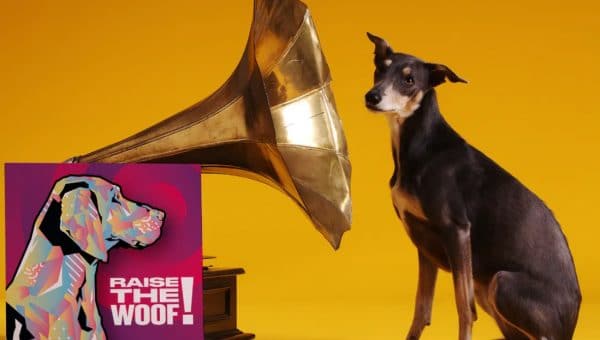 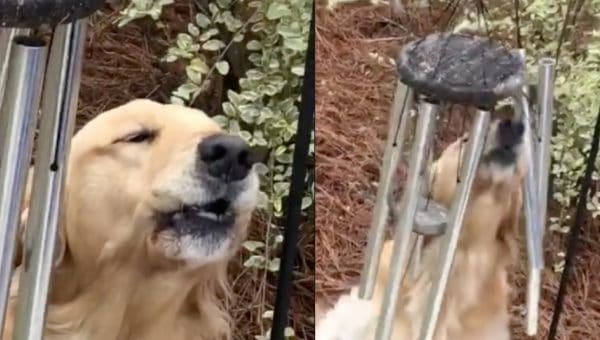