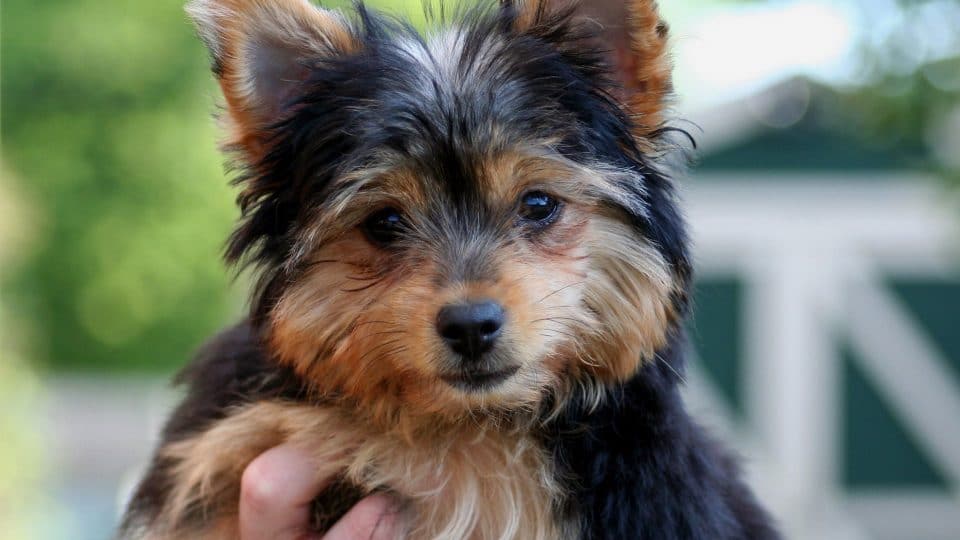 You’ve heard of a Chihuahua, and you’ve heard of a Yorkshire terrier (also known as a Yorkie)—but have you ever heard of a Chorkie dog? This tiny terrier is a mix of the two purebreds, and the resulting hybrid breed is one of the cutest small dogs you’ll ever encounter.

But just because it’s adorable doesn’t mean the Chorkie is the perfect dog for you. Learn more about this small crossbreed, and find out if you’ve met your match.

Because of its mixed pedigree, it can be difficult to predict the appearance of Chorkie dogs. They will likely take on some physical traits of both the Chihuahua and the Yorkie.

According to PetGuide, Chorkies usually have the distinctively long and silky hair of the Yorkshire terrier, while also retaining the head shape of the Chihuahua—which can either be shaped like an apple or deer head. In most Chorkies, you can expect the ears to stand tall like a Chihuahua, but it’s not unheard of for a Chorkie to have drooping ears.

Since the Chorkie usually has hair similar to the Yorkie, it also has similar grooming needs. Their long, human-like hair can either be left long or cut short—though if it’s kept long it will require daily brushing to avoid tangles. To keep the hair out of your Chorkie’s eyes, their hair will need to be trimmed around the face or clipped back.

Chorkies need baths every one to two weeks, though their small size makes it simple enough to do yourself in the kitchen sink—no trip to the groomer required.

Even though Chorkies tend to take on the hair of the Yorkie, they may not take on the coloring. While Yorkshire terriers are usually black, tan, and gray, Chorkies may also develop Chihuahua coloring, which can include white, chocolate, brown, fawn, cream, red, or a mix of all of those colors.

A Chorkie’s size also falls somewhere between its two parent breeds, with Chihuahuas, the smaller of the two breeds, usually growing to 5-8 inches and no more than 6 pounds.

Yorkshire terriers aren’t much bigger, often reaching 7-8 inches in size and around 7 pounds. This means that no matter which parent the Chorkie takes after in size, you can guarantee it will grow to be a very small dog. 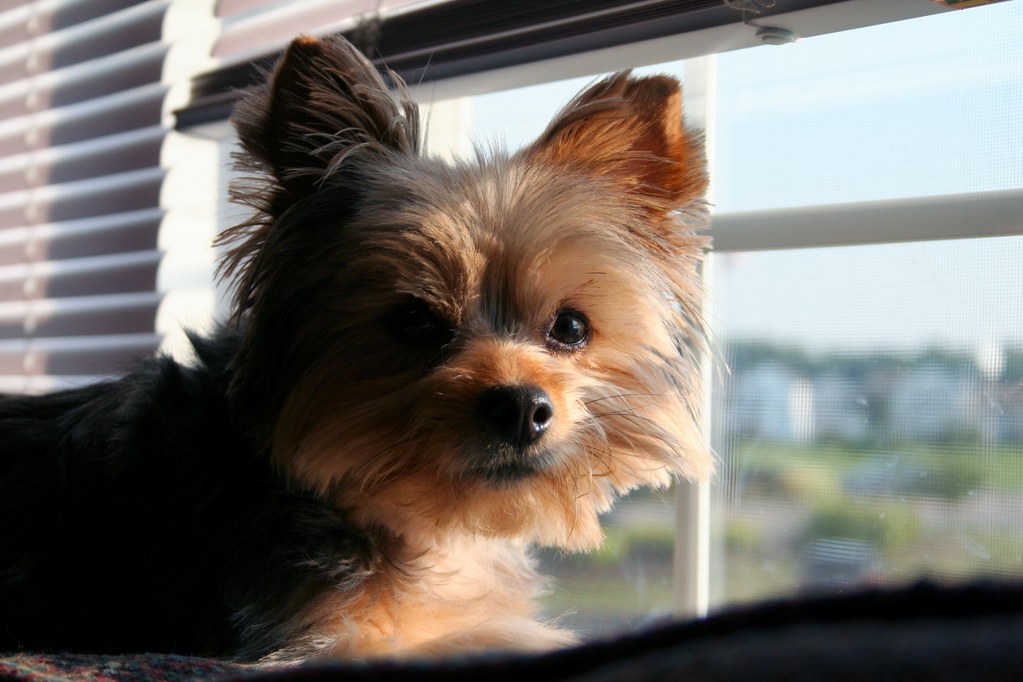 Much like their appearance, the personality of a Chorkie can be slightly unpredictable due to their mixed pedigree. They may take on the personality of a yorkie, which much like other terriers, tends to be spunky, courageous, willful, and bossy. Chihuahuas are also tiny dogs that pack big attitude, often displaying smart, stubborn, and domineering traits.

Both the Chihuahua and the Yorkshire terrier are breeds known for their barking, so don’t expect a lot of quiet time with a Chorkie in your household. If they take after the Chihuahua, a Chorkie may be anxious around new people, though they tend to warm up to strangers fairly quickly. They may also not take to other dogs—especially large ones—and often enjoy being the only dog of the house.

Chorkie dogs are playful, demanding your attention at many times throughout the day. Luckily, both breeds are also loyal and loving—and frequently up for a cuddle—meaning that no matter what personality traits are dominant in your Chorkie, you can almost guarantee they will show you enough love to balance out all that attitude.

Chorkies are most definitely inside dogs, and should be kept indoors for the most part, with the exception of short trips outside for walks and play.

Chorkie dogs, much like their parent breeds, are often tiny balls of energy. However, their very small size ensures they can still thrive in small spaces like apartments and condominiums.

The small size of a Chorkie dog makes them ideal for anyone living in an apartment, or in an urban setting without much of a yard. They’re also great companions for seniors, since they only require short, slow walks—sometimes just following their person around at home is enough movement for the day.

Their extremely small size may be what makes Chorkie dogs so cute, but it also means they can be somewhat fragile. For this reason, they may not be the best dogs for households with small children who aren’t able to handle them with care. Since they love fiercely and demand a lot of attention, they’re not the best choice for households where they would be alone frequently.

Chorkies also don’t do well in the cold weather, so bundle them up for even short trips outside during winter weather.

Both the Yorkshire Terrier and the Chihuahua are smart dogs that are quite trainable. They’re also both stubborn, however, a trait that can make training a long (and sometimes frustrating) process.

According to the American Kennel Club, both breeds are eager to please and respond well to positive reinforcement while training. Instead of harsh words and actions for bad behavior, good behavior should be rewarded with praise and treats.

Both breeds of dog are also confident and will attempt to rule the household if they aren’t taught early on who is in charge. This means humans should never accept behavior from a Chorkie puppy that won’t be acceptable from a Chorkie adult. Their bossy behavior may be cute when they’re tiny, but keep in mind that it could be less appealing from a full-grown dog.

Both the Yorkshire terrier and the Chihuahua also tend to be anxious around other humans and dogs, so socialization should start from a very young age. This can be accomplished with walks, or trips to the pet store or dog park. Obedience classes are also a great place to meet other dogs—and a way to knock out two tasks at once. 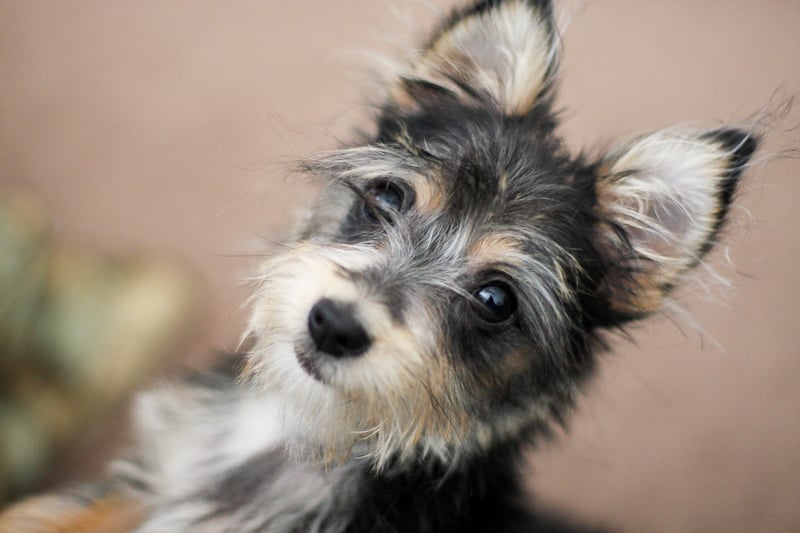 Everyone wants a healthy dog, and there has been some debate over whether mixed breed dogs, like the Chorkie, are more healthy than their purebred counterparts. According to the Institute of Canine Biology, a recent study has provided evidence to back up the theory that a mixed-breed dog has a better chance of good health than a purebred.

Some issues known to face Chihuahuas are heart issues, eye disease, and epilepsy. Yorkshire terriers are also prone to eye disease, as well as knee issues.

Since both are generally healthy breeds on their own, a Chorkie dog is likely to have few major health issues, though you should watch out for skin issues and allergies, according to PetGuide.

Chorkies are a fairly new breed of designer dog. While not much is known about when the Chihuahua and the Yorkshire terrier were originally crossed, the breed rose to popularity in the 1990s, in the United States.

It gets more complicated than that though—since we’re dealing with a mixed breed, we have to take a look at the origins of both parent breeds in order to see where this dog truly comes from.

The Chihuahua originates from Mexico when its larger ancestors were popular companions to the Toltecs about a thousand years ago. The Aztecs were credited with making it smaller in size around the 12th century.

Americans became interested in the breed in the mid-1800s when they found it in the state of Chihuahua (hence the name it bears today). The first Chihuahua was registered by the AKC in 1908. Roles in movies, TV shows, and even commercials have helped to elevate the Chihuahua to the popular status it enjoys today.

Compared to the long history of the Chihuahua, the Yorkshire terrier seems like a new breed, having originated in the mid-1800s. It was first known it the English counties of Yorkshire and Lancashire and was later seen as more of a fashionable prop, often seen sitting in the laps of English ladies.

Though this breed ended up with an elevated status, it didn’t start out that way.

Scottish weavers who emigrated north brought along their Scottish terriers, whose small size made them able to get into the smallest parts of textile factories to hunt down rodents. While that may seem like a far cry from the dainty Yorkies we know today, they are genetically related to Scottish terriers.

Getting a Chorkie Dog

Tracking down a Chorkie may not be as simple as finding a purebred dog because it’s a newer breed and they aren’t as plentiful as other dogs. However, a simple internet search will probably turn up a few options for rescuing a Chorkie or purchasing one from a breeder.

No matter how you go about finding your Chorkie, be aware of internet scams and puppy mills. Ask around about reputable breeders and rescue organizations, and read reviews if you’re thinking of getting a Chorkie you found online.

Most importantly, meet the breeder (or rescuer) and the dog, and take a look at where it’s been living, before making a commitment or putting down any money.

It may be possible to find a Chorkie through a rescue. While some may avoid rescues because rescued Chorkies are often full-grown dogs rather than puppies, it’s important to remember that there may be several benefits to adopting a rescued Chorkie.

It’s also likely that they will have already been spayed or neutered and given the proper immunizations, saving even more money on top of the adoption cost—which is often less expensive than buying from a breeder.

It’s more difficult to find reputable Chorkie breeders since they are not a breed registered by the AKC, and therefore won’t be listed among their approved breeders. Before you commit to a breeder, ask around about them—your vet or other local breeders may be a good resource.

Want to know more about Chorkies? Rover has you covered on everything from top dog names to the best beds, leashes, and gifts for these types of dogs. 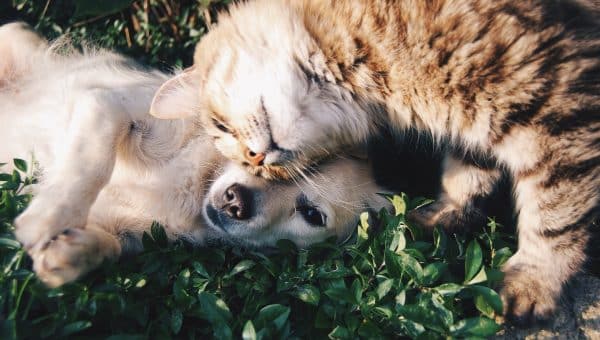