I had no idea what to expect when I stepped into the exhibit space for the book launch of “Pit Bull Flower Power” by author, artist and animal advocate Sophie Gamand. 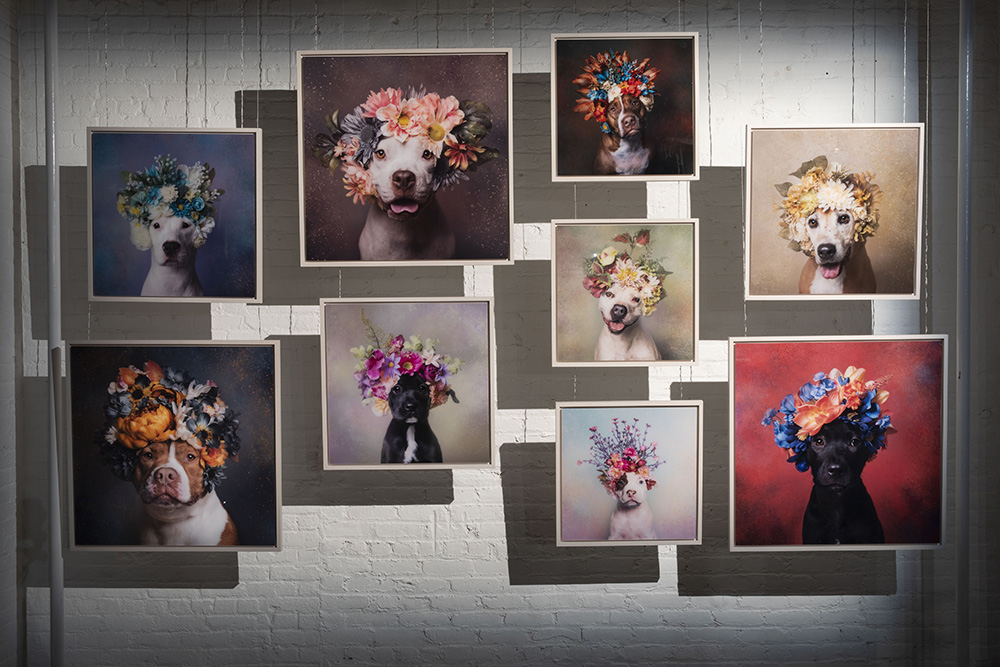 The exhibit combined images from the book with a thought-provoking, emotional installation about the plight of shelter dogs. When I first stepped in, a sense of calm yet sadness came over me when I saw large pieces of velvety fabric draped over figures of what appeared to be deceased dogs placed under beautiful flowers hanging from the ceiling. 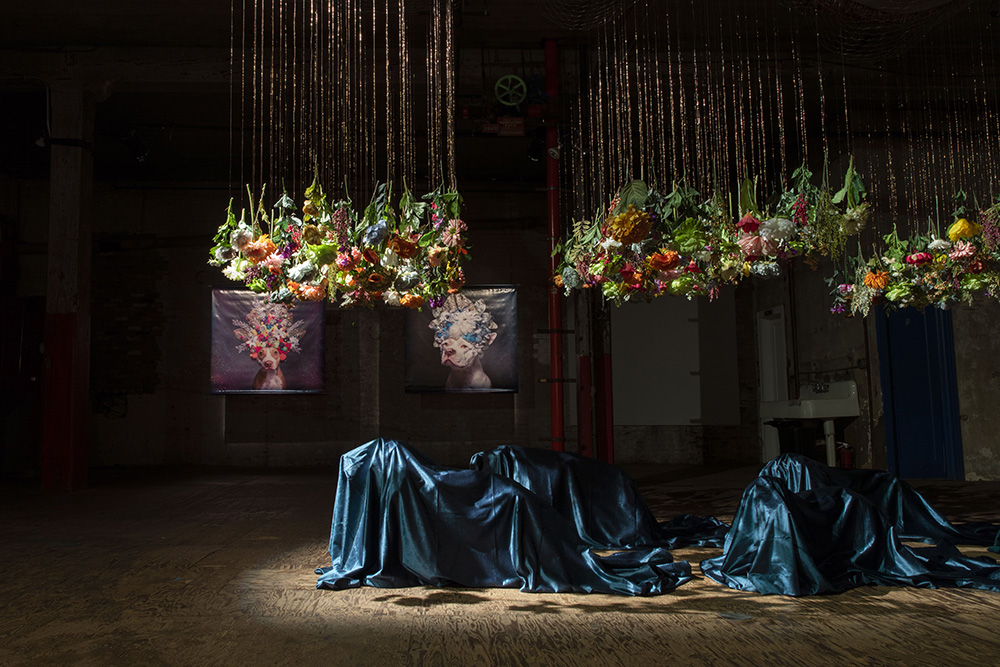 Further inside, dog collars hung from the ceiling suspended over stands with small cards featuring information about the dogs’ fate: euthanized, adopted or returned to owner. The collars still smelled of dog.

“I wanted to keep those remnants of what was left of those dogs from their past or their life,” Gamand said. “Their skin, hair and dirt still attached to the collars after being worn day in and day out speaks to a life. It was very important to have them in the exhibit.” 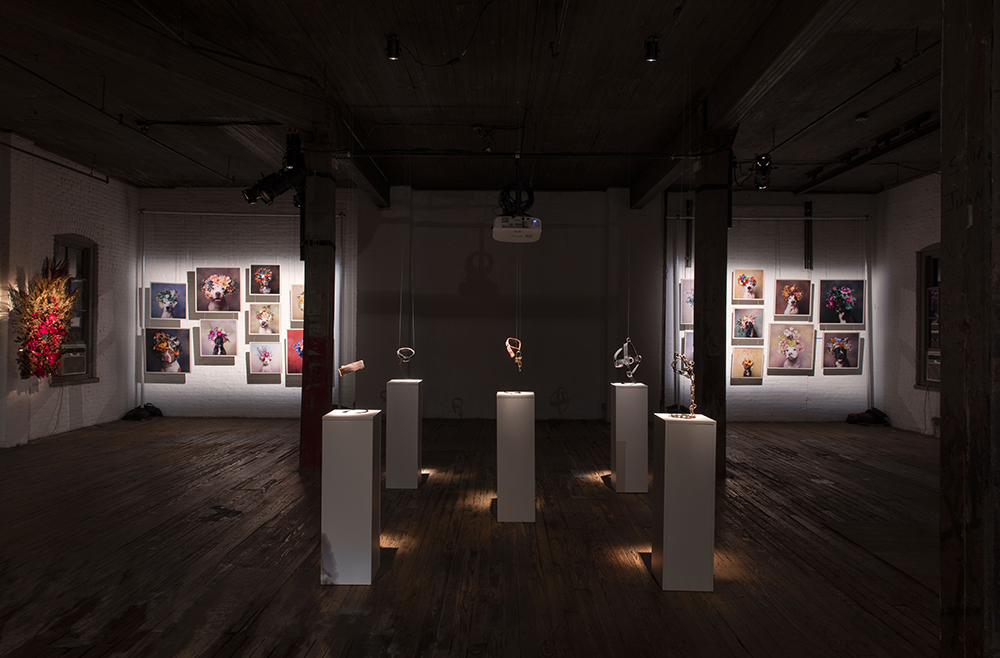 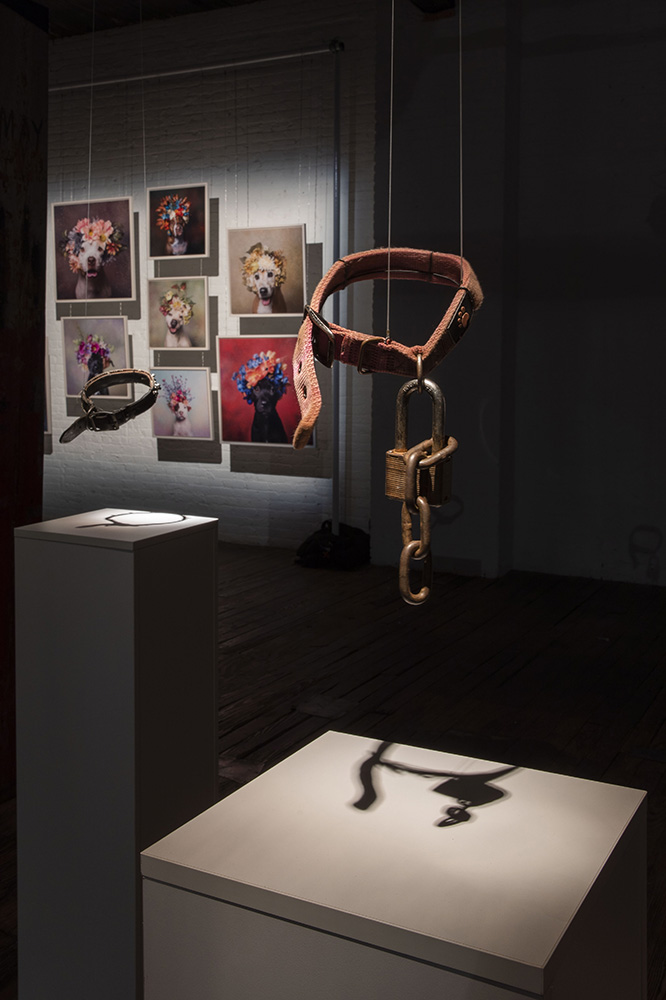 To the right of the room were small cushions that hung from the ceiling, each featuring an image of a pit bull from an open admission shelter on one side, and the dog’s fate on the back. Every animal that enters these shelters must be documented with a photo. These photos are usually done quickly, and the dog typically is petrified.

The photos are used for adoption and often a “reason why shelters have had such a bad reputation because the dog looks scary, dirty, and the photo is pixelized,” Gamand said. “They are often terrible photos, so I wanted to integrate that into my installation because of the contrast with my work. Sometimes those photos are the only chance of adoption the dog will get.” The cushions were done to make it interactive so people could touch them and connect to the photos. 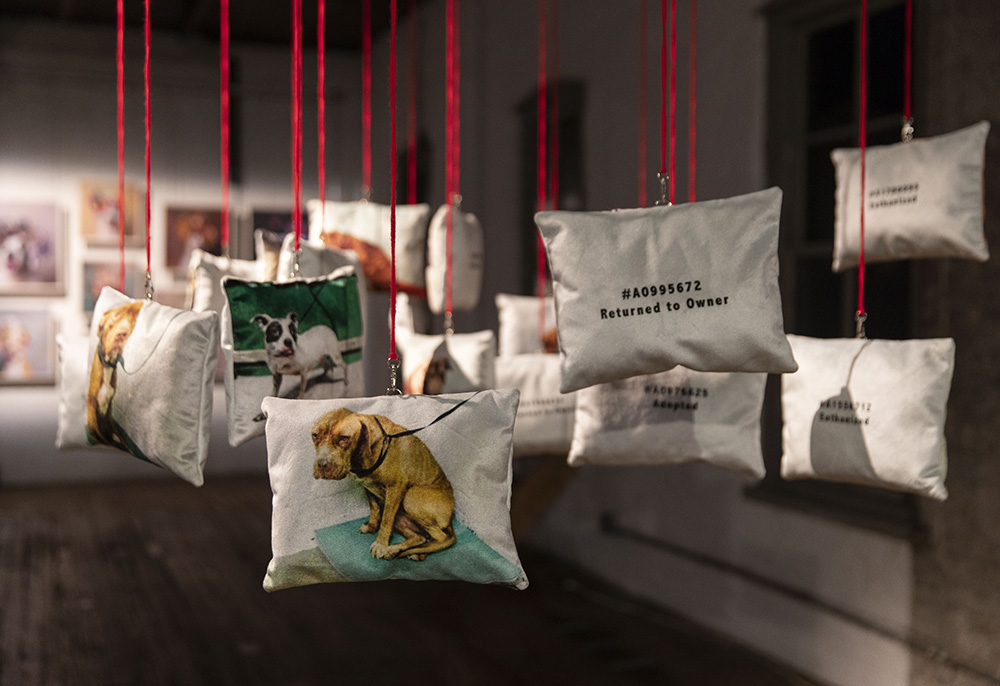 The Eyes of the Camera

Gamand’s book and exhibit did not happen overnight. She moved to New York City in 2010 with her camera and her fiancé. “I decided to use my camera as a way into my new life, to meet people and figure out what I would do next,” she said.

As a longtime animal lover, she was drawn to taking photos of dogs. Gamand grew up wanting to be a veterinarian and had all kinds of animals including dogs. At 10, she had her first camera and took photos of animals but eventually stopped. Gamand studied law, then worked for an NGO, and she even studied opera but decided it was not for her. She created a photography art magazine in France, which she ran for five years until she folded it to move to New York.

“I was ready to pick up the camera again and start my own art journey,” she said. “My English was not very good, and I wanted to take photos of dogs. This became my way in since it was hard to communicate with people. It was a way to interact with my new life without having conversations, and dogs became my main focus.”

Gamand quickly learned about animal rescues and the number of homeless dogs in the U.S. and in New York. She decided to help and soon dedicated her work to shelter dogs using her camera to take photos of the animals to help get them adopted.

“I go to animal shelters and promote adoptable dogs and that’s basically my job,” Gamand said, adding that she doesn’t get paid and covers all her travel expenses. 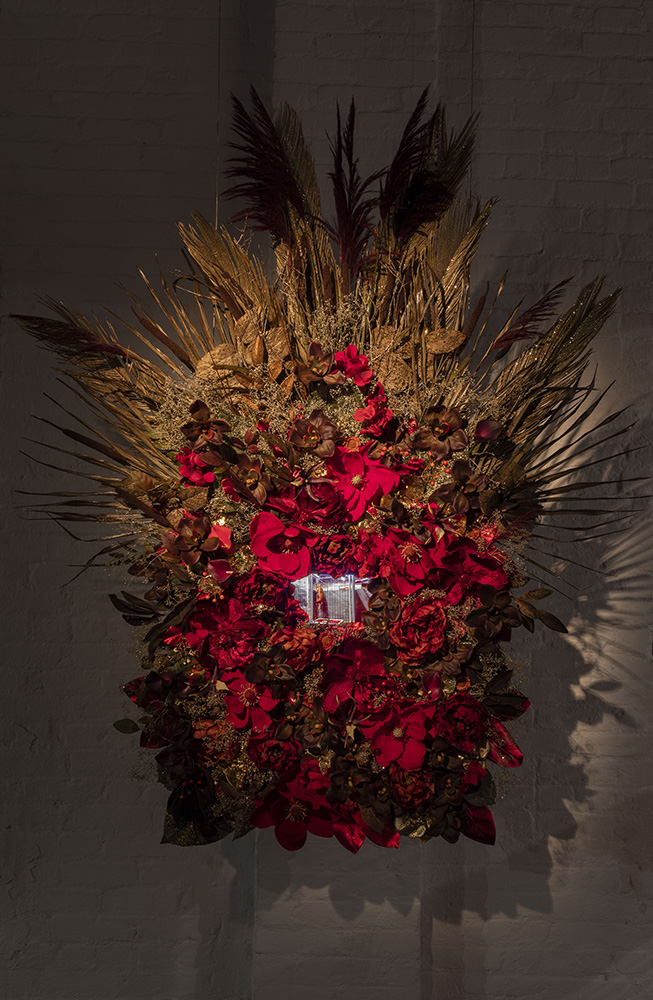 About a year after she started volunteering her services, Gamand started taking photos of pit bulls. However, working with them did not come easy. 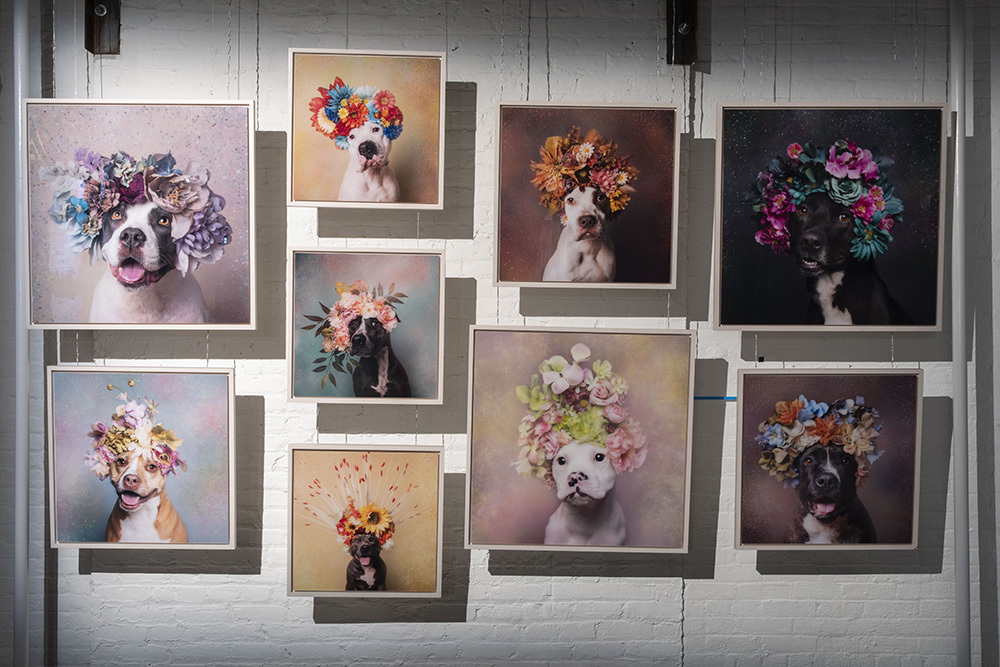 When she was about 12, Gamand was mauled by a Briard, a large herding dog. “It was very traumatic,” she said. “The dog jumped on me and attacked, leaving me anxious around large jumpy dogs.” This later affected her work with shelter pit pulls making it difficult to photograph them because of her terrifying childhood memories.

That along with their “bad reputation” made it worse. “I didn’t want to touch them or interact with them,” she said. “I would take a quick photo just to get it done and out of the way.”

However, after a few months of volunteering, she realized her reactions were unwarranted. “The dogs had done nothing bad to me,” she said. “It was time to face my unfounded fears and realize that all the bad things I read in the media were not true.” 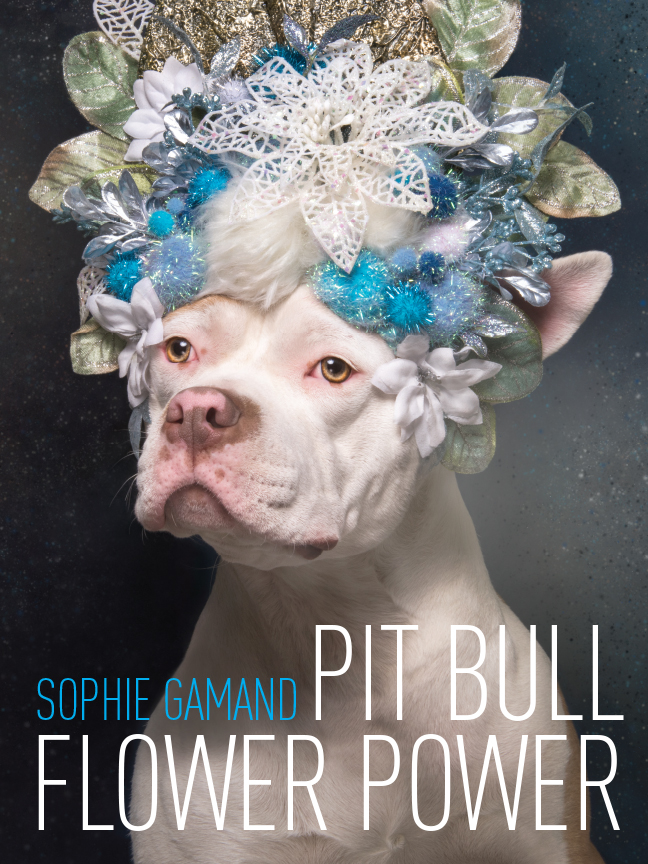 Gamand then created a project focused on pit bulls to help overcome the prejudice surrounding them. “I was curious to see if art would change the way we see pit bulls,” she said.

In 2014, armed with a glue gun and flowers, Gamand figured out how to create flower crowns to place on the heads of shelter pit bulls. She brought a suitcase full of them to a New York shelter, but she was unsure if her idea would work. She asked volunteers to first bring out a mellow pit bull. They brought her a dog named Baby, who turned out to be the first story in Gamand’s latest book.

“Baby was very sweet and I was nervous,” she said. Gamand placed the flower crown on Baby’s head. “I thought the idea was a longshot. But Baby sat there wearing the crown looking so elegant and dignified. There was something in her eyes that was so deep and moving. From the first portrait, I could see that the project was meaningful, and I thought I could make a difference for that dog.” 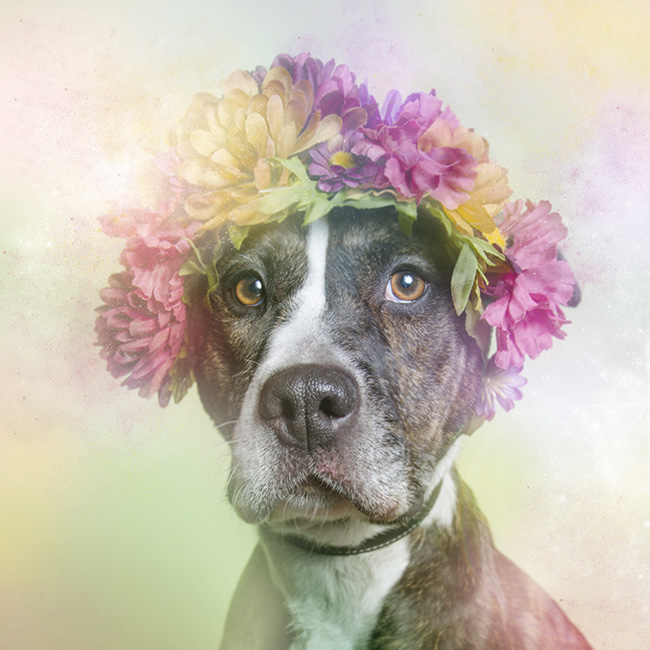 Shortly after that photoshoot, Gamand released the images on her website and social media. The shelter also shared the photos. They immediately went viral with 9 million views. The shelter received phone calls and many comments. There was a surge in shelter visitors who expressed a desire to adopt.

“It was insane,” Gamand said. Other shelters called asking Gamand to do the same with their dogs. “Over the past four years, the project has been very successful and really hasn’t slowed down.” 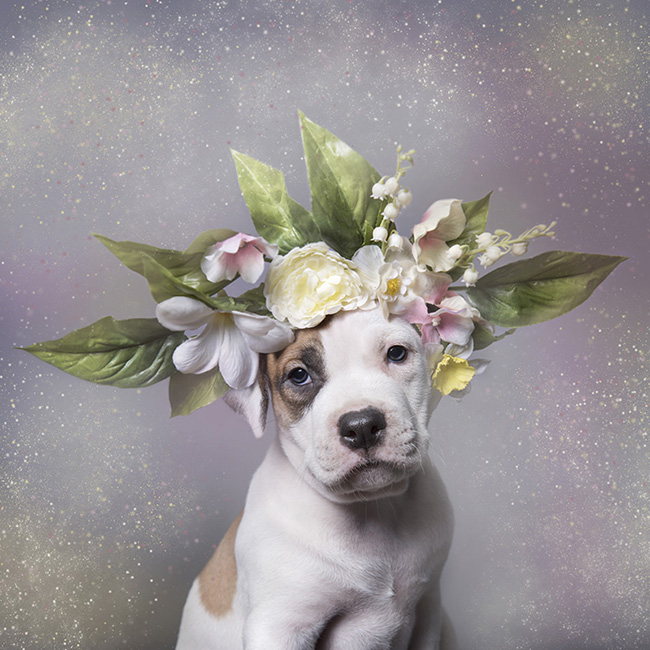 Gamand traveled all across the country and has about 450 portraits in the series. “People have said, ‘I saw a dog on your Instagram and went to the shelter and adopted her.’” Gamand has posted last-chance dogs who were adopted the next day, and dogs waiting for years have been adopted. “Sometimes people go to adopt one of the models and end up adopting a different dog.”

The project has shed light on shelters that no one knew about including an Alabama shelter that had little visibility, barely any social followers and which struggled financially. Following a photo shoot with Gamand, a lot of the dogs were adopted. 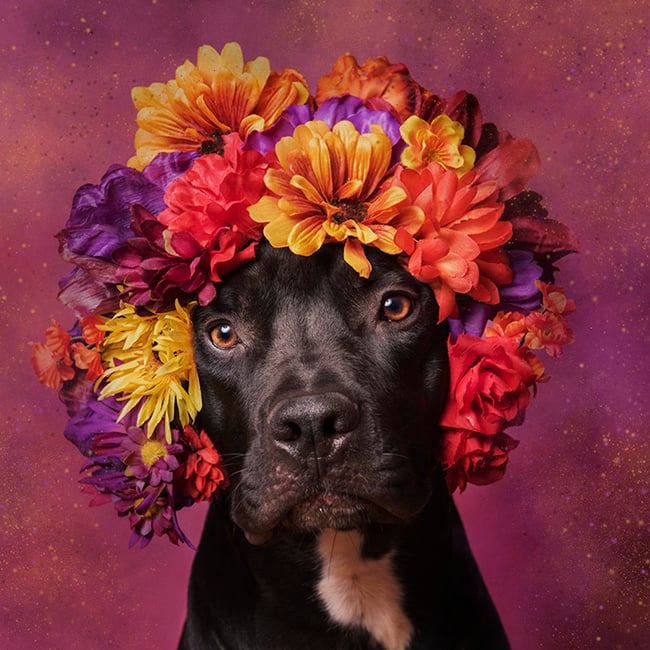 “People are drawn to my images because they are easy on the eye,” she said. “The reality behind these pictures is much harsher. These dogs have gone through so much. I soften the blow a little bit. I get the message across, but I kind of put a bow on it.” 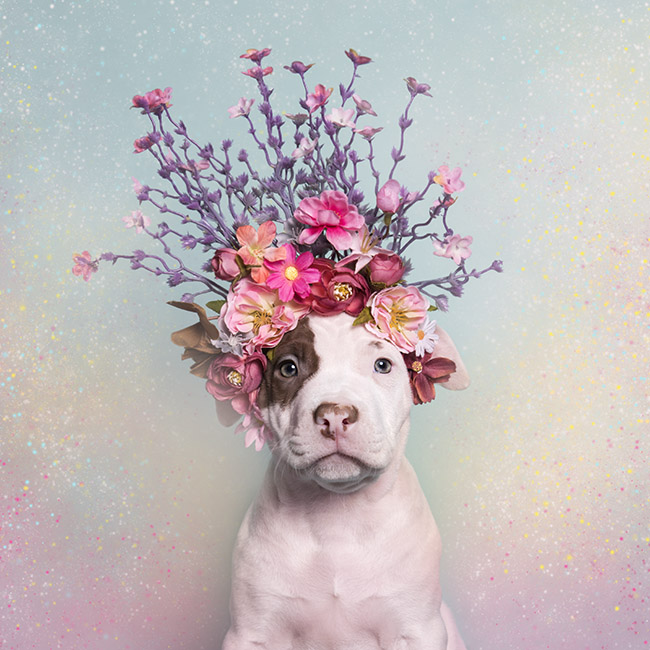 Others have messaged Gamand to let her know how her work has changed their minds about pit bulls. “When people see these portraits, they feel an emotional connection to the dogs and they can’t hate them anymore, which is why this project works so well.”

The release of “Pit Bull Flower Power” coincided with Adopt a Shelter Dog Month and Pit Bull Awareness Month in October. The book includes stories about each dog. “It’s a powerful advocacy tool and I hope it will have a long life,” Gamand said. 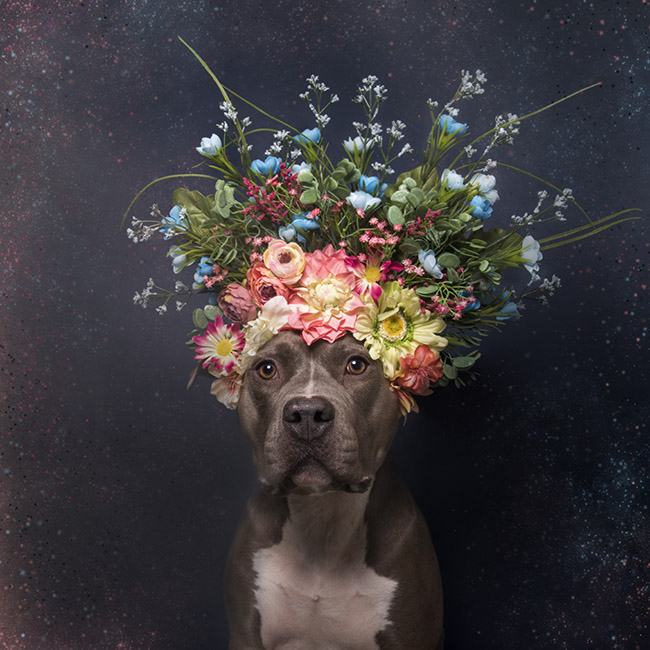 The “Pit Bull Flower Power” project has been going strong for four years and has had a huge impact on pit bull advocacy. Gamand is hopeful that the book can expand the reach of the project and get the word out. “I get messages from countries all over the world, so I think this project has been so impactful,” she said. The book along with the exhibit “are meant as a celebration of all the dogs, the ones who made it and the ones who didn’t.” 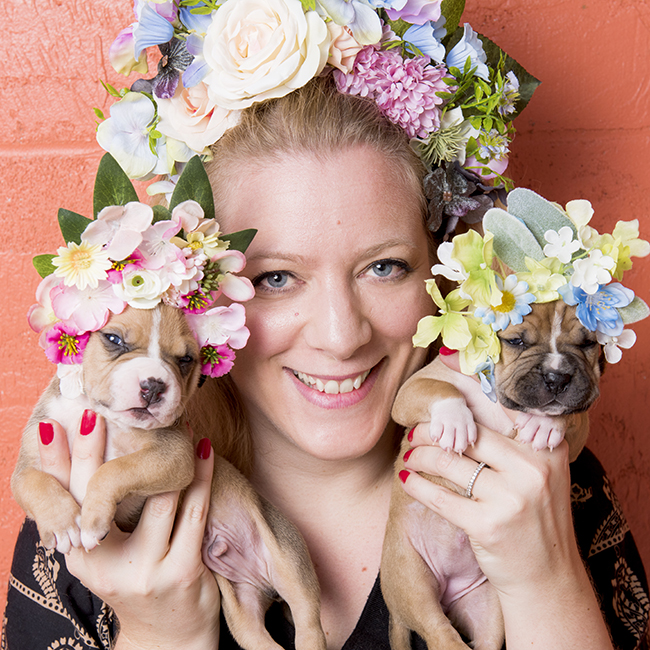 You can purchase her book directly from her website or at Amazon.