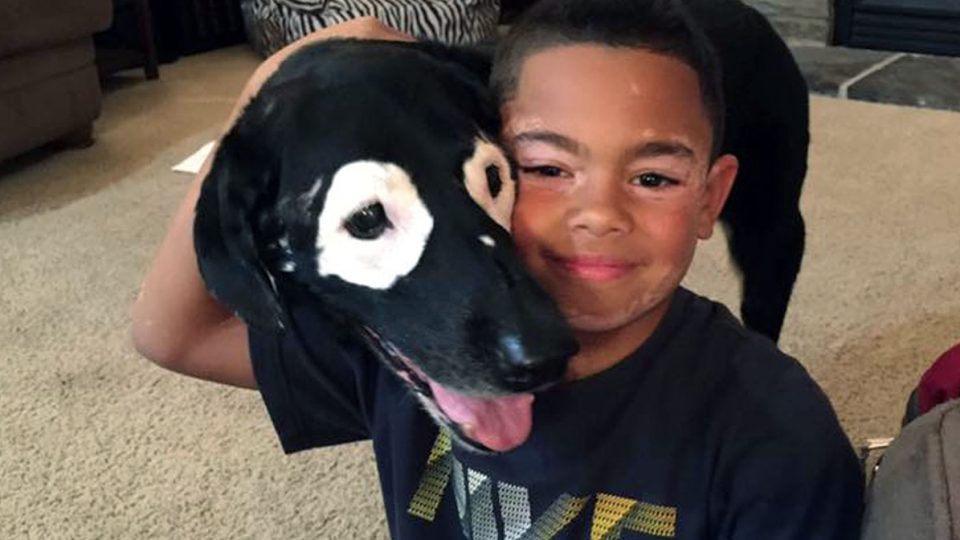 Rowdy was a regular black lab until his family noticed white spots developing around his eyes. Rowdy was diagnosed with vitiligo—a condition that causes a loss of pigmentation in skin and hair. It’s a striking, bespectacled look, and Rowdy grabs attention wherever he goes. Rowdy has been a spokesdog for the condition since 2015 and loves to inspire kids with vitiligo, who frequently suffer a lack of self-confidence.

Carter started developing the telltale spots in kindergarten and it was a huge source of frustration for him. “I used to pick up Carter from kindergarten and first grade, and the first thing he would say is that he hates his face and hates his skin,” his mom told KOMO News. When mom Stephanie discovered Rowdy on Facebook and showed Carter photos of the dog, it was a game changer.

UPDATE ON ROWDY . Rowdy saw a neurologist in the ER today. They are not sure if it was a seizure or a stroke or something else. They did a lot of tests and without a "much needed" (expensive) MRI and CT Scan, we may never know. He could have a tumor or a mass causing a lot of his issues. . We left with them prescribing a new medication for seizures as well as some codeine for his pain. This could be age related, an isolated event, or he may have more episodes like today. . I want to thank EACH AND EVERY ONE OF YOU for the prayers, well wishes, and support! It is truly overwhelming to see the kindness and love this pup has from around the world! We love you all! Please continue to follow along the amazing adventure we are having with Carter and his mom from Arkansas! While Rowdy started his day with a scare and a trip to the ER, he was able to end it meeting up with Carter, another beautiful little girl Emma from Eugene, and some dear family friends for a play date and then squeezed in a photo shoot to boot. . This dog never ceases to amaze me with his resilience!!

Carter and Rowdy become online penpals, and Carter had a much easier time accepting his condition and the responses it brings from his peers. Rowdy’s online followers, his human family, and Carter’s family conspired together to raise funds for the Arkansas boy to travel to Oregon to meet his canine hero.