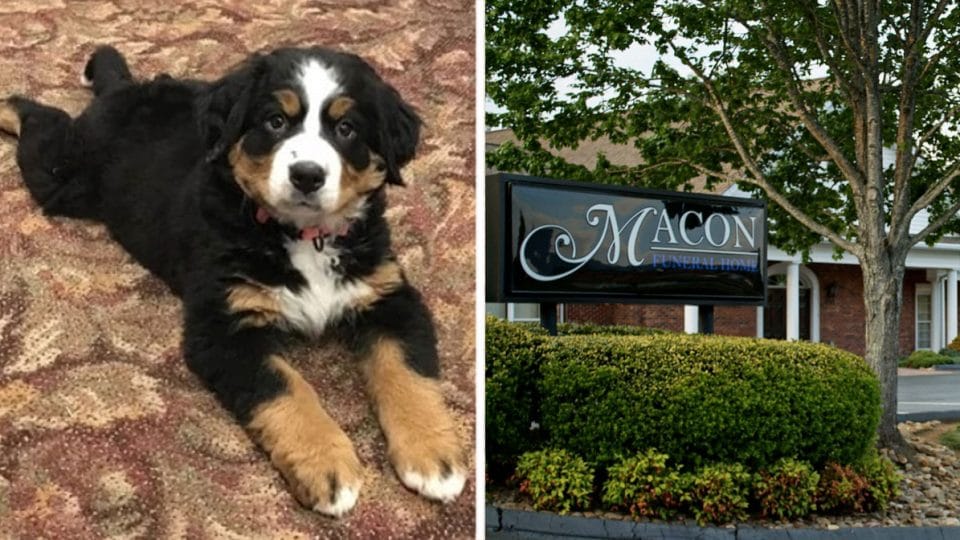 Mochi the 8-week-old Bernese mountain dog is being groomed for a very important job at Macon Funeral Home in Franklin, N.C.

As the latest employee on staff, this adorable and currently small pup is headed for big things, including becoming a member of the grief support team. Macon Funeral Home introduced a sleeping Mochi in a sweet Facebook post on Jan. 14, 2020.

New fans of the cute pooch learned that Mochi “loves people and loves to sleep,” and it brought 445 likes and 74 comments in favor of the pup’s new role. The post also invited people to come on by to meet the cute pup.

One commenter even wrote: “Mochi is sure to bring a smile to any grieving person. Berners are great Lovers and therapy for anyone.”

Mochi’s owner Tori McKay doesn’t doubt that one bit. The idea is McKay’s brainchild. She’s the office administrator at Macon Funeral Home. “I’ve had this dream of having a dog at the funeral home for years, 10 to be exact,” she wrote on Macon’s website. Brian Hylton, Macon’s manager, was on board.

It’s been said that dogs just make things better. While they can’t change everything, they can often lift a person’s spirits even in times of grief.

This is especially true of Bernese mountain dogs who are known for being laid-back and kind. They also have a history of working as therapy and support dogs, which is why McKay chose the breed.

Even though larger dogs have shorter life spans (Bernese Mountain dogs live on average 6 to 8 years), McKay was drawn to the breed because of their intelligence and people skills.

McKay plans to work one-on-one with Mochi as well as socialize her at the funeral home. But Mochi’s official training won’t begin until she is a year old. After training, McKay hopes that Mochi will be able to lift the spirits and bring comfort to those needing her services most, similar to the role of Fiona, another Bernese mountain dog who works at a funeral home in Brooklyn.

“So far, everyone has been so supportive, and Mochi has already made a difference in families’ lives this week,” McKay wrote on the Macon website. “I have had people reach out for grief therapy, and the reception on Facebook has been incredible.”

What It Takes to Become a Grief Therapy Dog

Wondering what steps are required to have a dog certified for grief therapy? Melissa Munfred (aka The Modern Mortician), a mortician and funeral director in Texas discusses how she certified her dog Kermit and how awesome he is at his job.

Munfred shares that first her dog Kermit passed his Canine Good Citizen test. Next, she chose a certified therapy dog program, which dogs can begin at one year of age.  In case you’re interested, some of the non-profits Munfred mentions are The Dog Alliance, Pet Partners, Divine Canines, and Therapy Dogs International.

The Life of a Grief Therapy Dog