When NASA astronaut Leland Melvin was assigned to a space shuttle mission in 2008, he was told he could bring his family for the official photo shoot wearing the famous orange “pumpkin suit.” They didn’t say two-legged or four-legged, and although dogs are not allowed on base at NASA, family is family.

So, Melvin brought his rescue dogs Jake and Scout along with a neighbor to hold them and keep them quiet in the back of his van. “I got to the guard shack, flashed my badge, and I gunned the van and drove to the photo lab,” Melvin said. He then went up the back stairs where the photographer was waiting, went into the photo lab with 100 MilkBones to keep the dogs busy while he changed into the suit and came out. “They (the dogs) ran toward me, and I told the photographer to hold his finger on the shutter and that’s how the photo was born.” 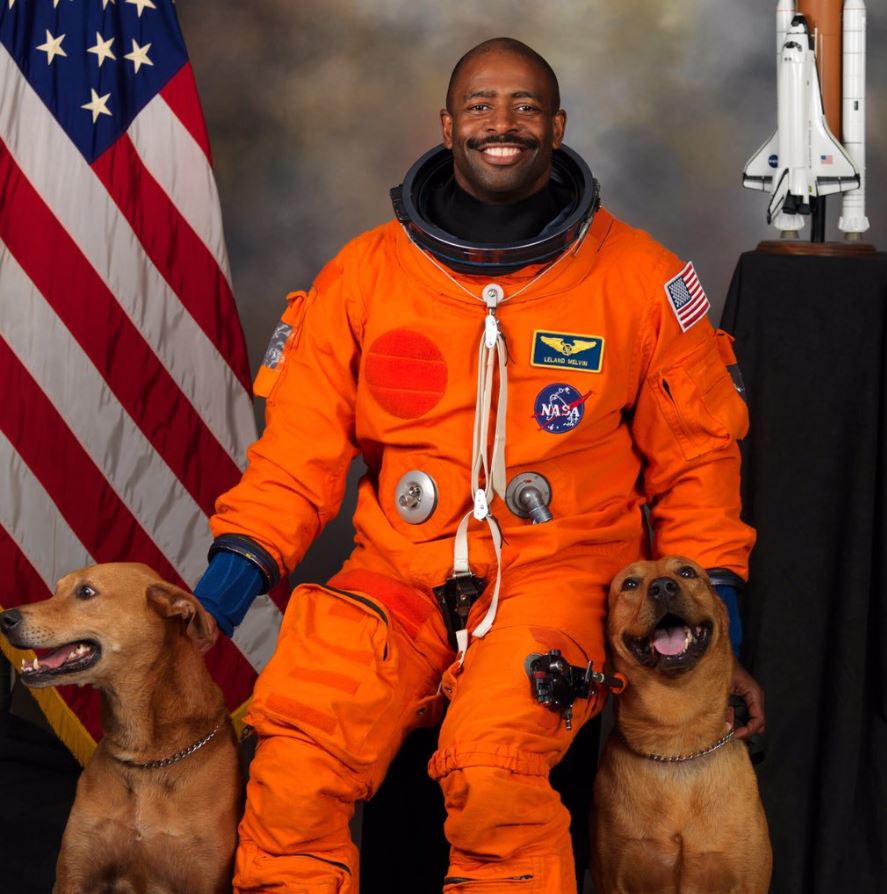 After the photo shoot, Melvin had to change and the MilkBones were gone. “The dogs started barking and a security guard came in and asked if there were dogs in there,” Melvin said. “We said, ‘No, that’s the doggy screensaver.’ ” After he changed he was able to quiet the dogs and get out of there.

Not just a former astronaut, Melvin is a former NFL player, current engineer, educator, speaker and dog rescue advocate. He grew up with family dogs including a collie named King. “I’ve always loved animals, but I didn’t rescue any before Jake and Scout, which was later in my life.” 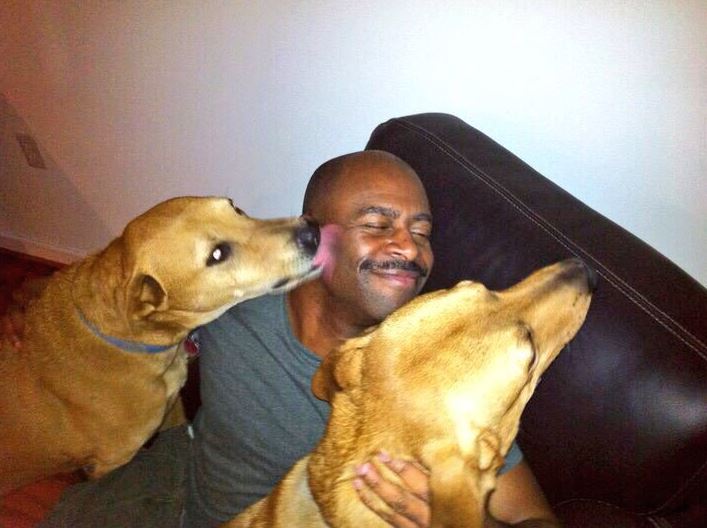 First came Jake, “who was being held by a family in a small closet during the day,” Melvin said. It was approximately 2002 when Melvin found out about him from a former Russian teacher who said, “You need a dog. This dog is for you.” Melvin was moving to D.C., and didn’t think he needed a dog, but he checked out Jake and said, “I need this dog,” and then adopted him. Jake became his road partner and traveler; they did everything together.

Fast forward four years later while Melvin was in his kitchen cooking for Thanksgiving. A neighbor came by and said that Jake was sitting outside Melvin’s house. “No, he’s not,” Melvin said. “He’s in my kitchen.” Melvin went outside to find a dog that looked like Jake sitting in his front yard. He had no tags, and Melvin searched for an owner but none was found. “I believe the dog scouted me out. I think someone dumped him.” He named him Scout, had him treated for heartworms, and the rest was history. 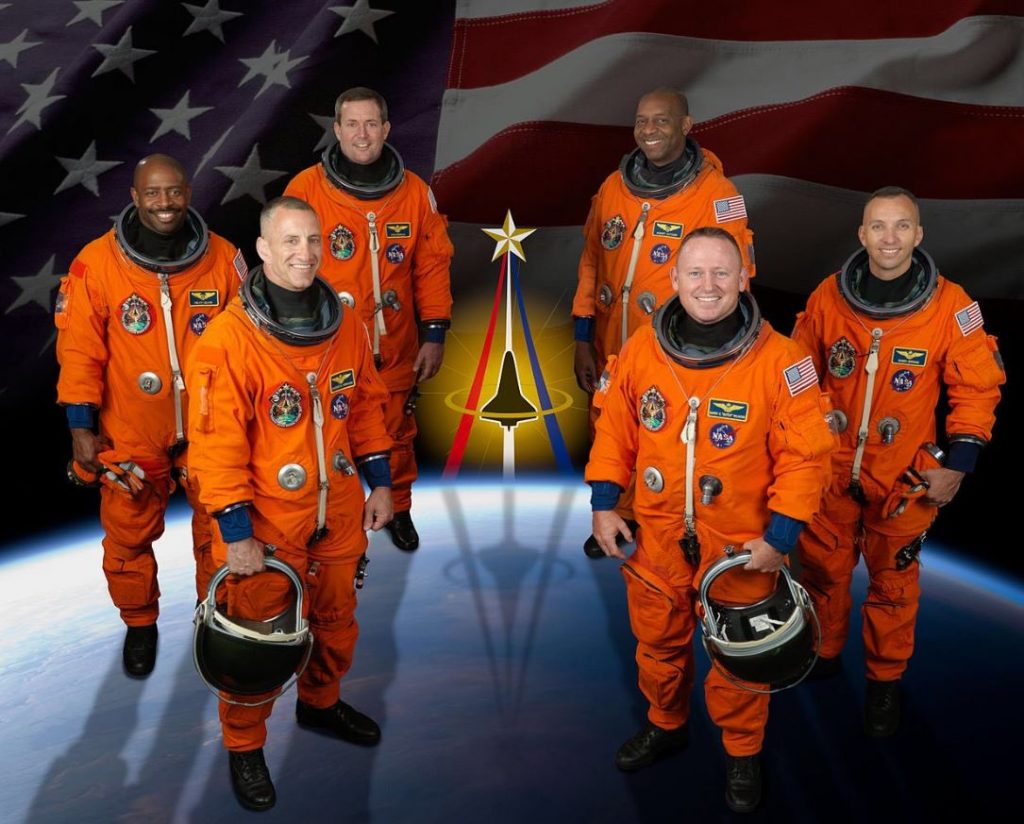 After Scout joined the family, Melvin got a van and turned it into a camper. “We had incredible journeys together,” he said. “And when I was in space, I called the kennel where I kept them and kind of talked to them while I was in space.”

Jake and Scout died about nine months apart around 2014.  Scout had lymphoma and was about 9 years old. Then Jake died at the age of 15. “We had a great life together,” Melvin said.

About four years after his dogs passed away, Melvin found himself moving into a new place where he had lots of land. His prior home didn’t allow dogs, so it was a perfect time and place to bring home a new dog.

He contacted the Rhodesian Ridgeback Rescue of America and asked about puppies and was told they didn’t have any. Melvin wanted to start out with a rescue puppy, and a week later he received a call. “This is your lucky day,” the woman said. The rescue, which typically doesn’t get puppies, took in a female who turned out to be pregnant with 14 puppies. Melvin was put at the top of the list to adopt one. 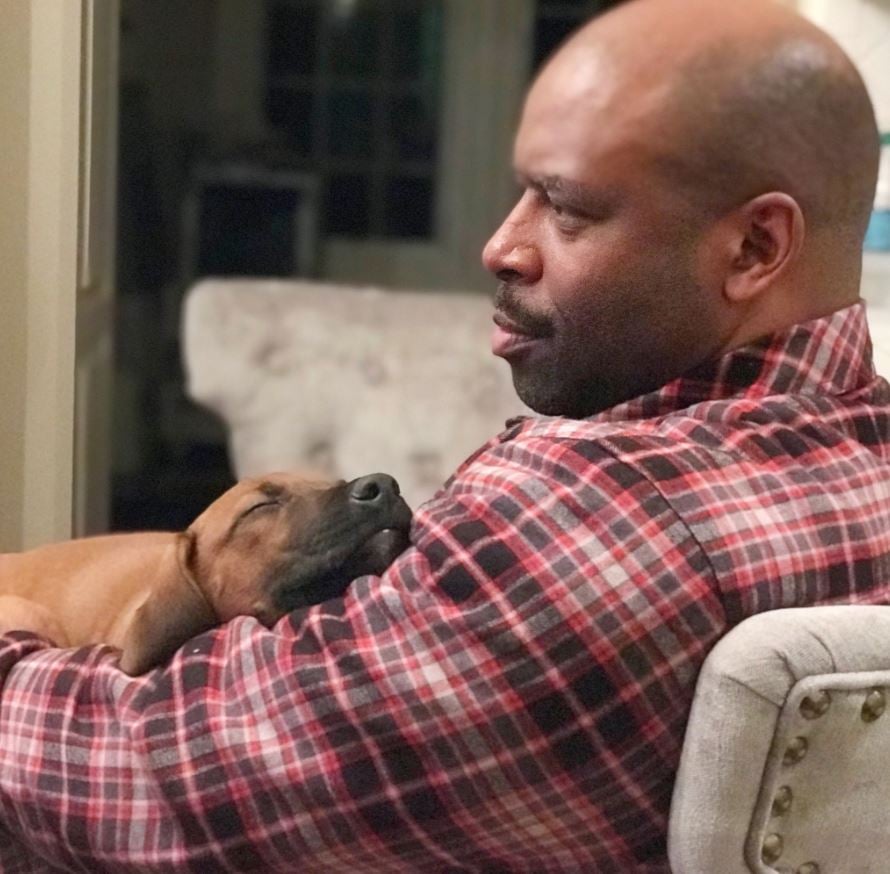 About eight months ago, Melvin flew to Boston and then went to Cape Cod to watch all the puppies playing together. He chose Zorro, flew with him to Virginia, and then drove home with him in his crate. “It was just such a powerful connection,” he said.

The Little Dog That Could

From the start, Zorro fit perfectly into Melvin’s world. The past 8 months have been filled with morning runs, hiking and just hanging out.

Zorro is kind of like a little engineer, which makes him a perfect companion for Melvin. While finishing up the main house, Melvin was living in the guest house, but Zorro would eat the rocks in the fireplace. 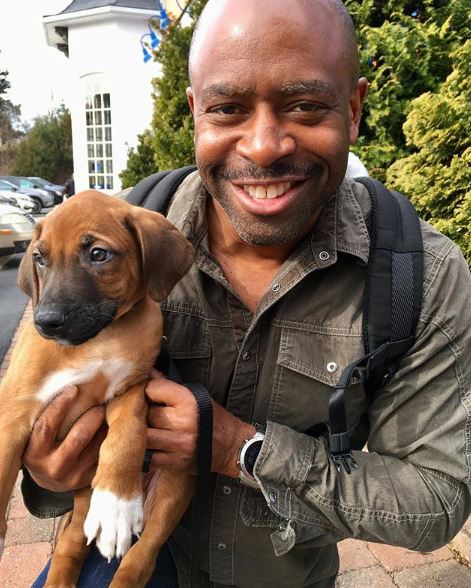 Melvin had to build a barrier to keep Zorro out, while the puppy sat and watched as Melvin built it. “He wasn’t trying to get through, just looking to see what I was going to do,” Melvin said. “And after I finished he looked at me like, ‘Come on you know I can get through that,’ and he looked at me and then ran full bolt and knocked it down and got a rock.” Melvin got a good laugh. Zorro has been to training since the incident, but he still does his thing. “It’s funny to see his personality. He’s not obsequious; he has his own little world that he’s in and lets me coexist in it.”

Have Socks, Will Eat

Like many dogs, Zorro loves socks. His thing is to grab one and take it under the bed. At first, Melvin thought Zorro was just chewing but soon realized he was eating them!

While Melvin was getting ready for a previous trip, he was looking for a sock mate. He entered the kitchen and saw “this thing on the floor and I didn’t know what it was,” he said. It turned out, Zorro ate the sock and threw it up. Luckily, Zorro didn’t get sicker than that. When he did it again, Melvin had to take him to the vet who showed him the contents of Zorro’s stomach, which included nuts, acorns, some rocks and the sock. 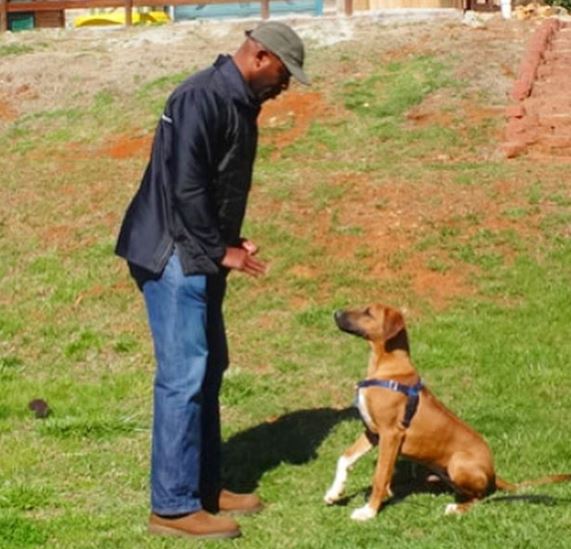 Melvin now keeps everything out of Zorro’s reach. “Now that he’s older I don’t think he’s digesting them anymore but you just never know,” he said.  Instead, Zorro found another delicacy: deer poop. “Deer poop is like doggy candy to them,” Melvin said, adding that with many deer in the area he walks around his yard constantly cleaning it up.

On the Road Again

Although Melvin travels a lot for various speaking engagements, he says that road trips with Zorro are in the cards, so he is converting another van into a camper for future trips. 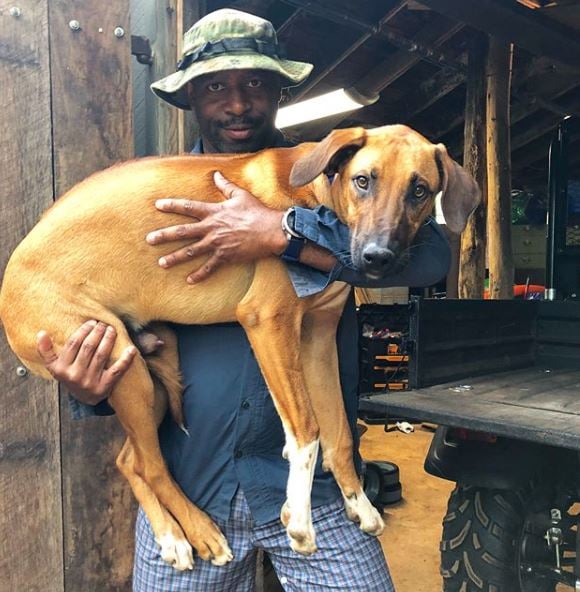 Melvin learns something new from Zorro every day.  “I learn patience,” he said. “I learn how to clean up deer poop.  I learn empathy. I learn love. That’s the main thing: They love you unconditionally. We all need to be able to take care of more than just ourselves and this definitely teaches you how to do that if you do it the right way.”

A Force for Rescue

“Everyone needs an opportunity to exist in this world and that includes dogs too, or cats, any animal,” he said. Although he fell in love with the Rhodesian breed, he loves all breeds and wants to ensure all people and animals have a chance. “It helps humanity when we take care of the children and the dogs and people who don’t have their own ability to take care of themselves.” 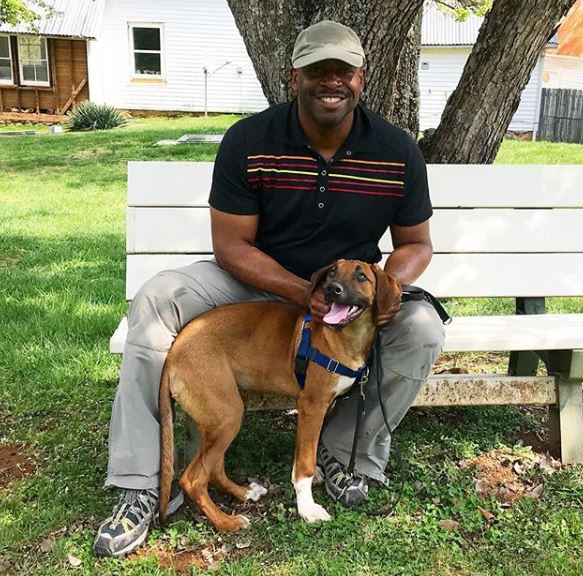 “Once I convert the van I will take Zorro with me and take him on the stage and wait until I finish or add to the conversation with a well-placed bark,” he said.

And what about that NASA photo? There are some funny outtakes, but it’s that famous photo of the dogs kissing Melvin that will live forever in our hearts. Even if the dogs weren’t supposed to be in the photo, we’re glad they were. 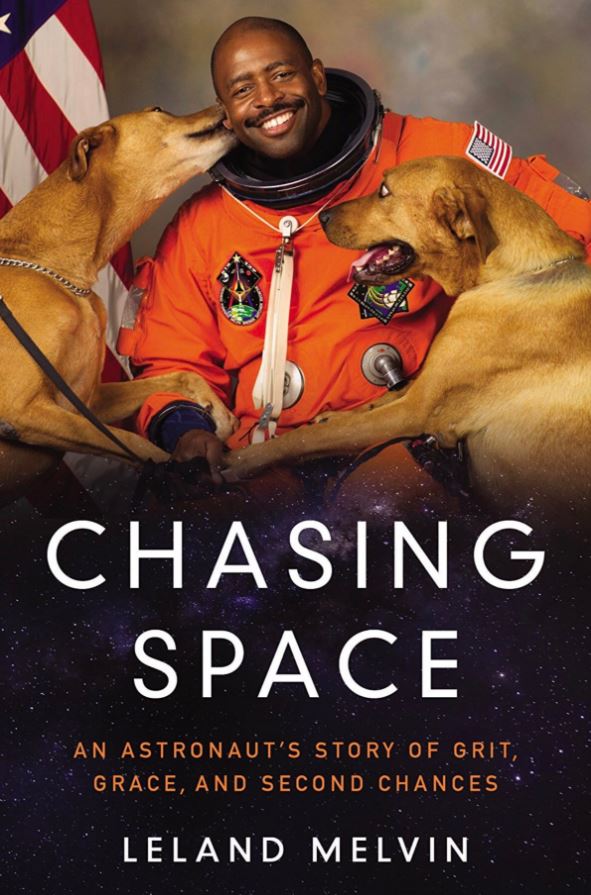 Learn more about Leland Melvin and his book, “Chasing Space” on his website.