If your dog is starting to look a little thick around the middle, you’re not alone.

A whopping 54 percent of dogs in the United States are overweight or obese, and 95 percent of owners don’t even recognize there’s a problem.

But take heart, portly-pet owners! Many dogs have fought back from even morbid obesity and gone on to live happy, active lives.

Here’s a look at a few of these extreme weight-loss success stories for dogs, complete with the before-and-after pictures.

One Tail at a Time

This ironically named butterball of a beagle tipped the scales at 85 pounds and could barely lift his hind end to walk when he was surrendered by his elderly owner in January 2015. He was so heavy he had to be wheeled out in a wagon when his new caregivers, One Tail at a Time Dog Rescue, came to pick him up from animal control.

His foster family put him on a strict regimen including fruits and veggies for snacks and swimming for exercise. By May of 2015, Mr. Chips had lost 20 pounds. Just over a year later, his foster family became his forever home.

He now weighs in at 44 pounds, walks several times a day, enjoys chasing the occasional squirrel, and loves playing with his canine siblings, especially beagle Gracie. See more photos of Kale Chips’ journey on One Tail at a Time’s Facebook page.

Three years ago, Brooke Burton stepped in and took responsibility when she saw what was happening with a relative’s dachshund. At 56 pounds, Dennis was massive, rather than miniature.

Fast forward to today and the bright-eyed boy is an appropriately petite 9 pounds and a “thriving ornery, rambunctious, little spitfire,” according to Burton.

She saved Dennis with a measured diet of the same Diamond Naturals dry food her other dog was eating, the joint supplement Cosequin, lots of love and attention, and of course, exercise. This enormous weight loss resulted in a healthy dog, but one with a lot of excess skin. He’s had four expensive surgeries thus far, and is doing much better.

Vincent was more than fat. He was morbidly obese when his owner passed away. Depressed and barely able to walk, he had the good fortune to be taken in by K-9 Angels Rescue in Houston.

Foster mom Melissa Anderson brought Skinny Vinnie, as he is now known, down to 15 pounds through diet and exercise. As his weight dropped, Vinnie’s spirits lifted, and he began to run, swim, and enjoy the company of other foster dogs. At nine years old, he’s in great shape.

On June 9 People Magazine broke the good news that Skinny Vinnie will be staying with Anderson and her family permanently. 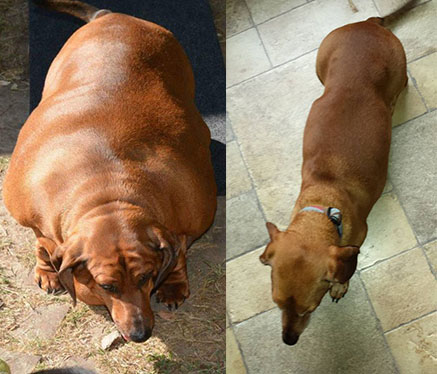 Obie weighed a whopping 77 pounds when Nora Vanetta of Portland took over his care in 2012. His elderly owners didn’t realize that showing their love through constant feeding was slowly killing their standard dachshund.

A new diet and slow return to exercise brought the rotund fellow down to 23 pounds, a weight he has maintained for three years. Now 10, Obie has some grey in his muzzle but a spring in his step. He gives Vanetta’s other dogs a run for their money, chasing critters and generally enjoying the good life.

You can catch up with Obie and his pals on Facebook. 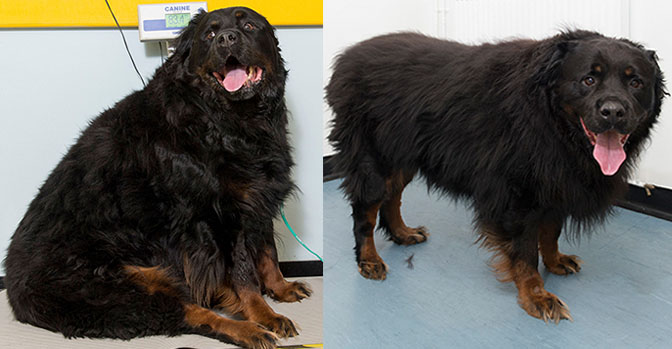 Pet obesity is not solely an American issue. The Dispensary for Sick Animals, or PDSA, has been helping British pets lose weight for 11 years with their Pet Fit Club campaign.

Each year the non-profit chooses a dozen portly pets to compete in a six-month diet and exercise program. Gigantic Rottweiler Hooch, shown here, weighed 153 pounds (down from 180) when he entered the contest, and emerged over 27 pounds lighter. More information, including weight loss tips, can be found on their website.