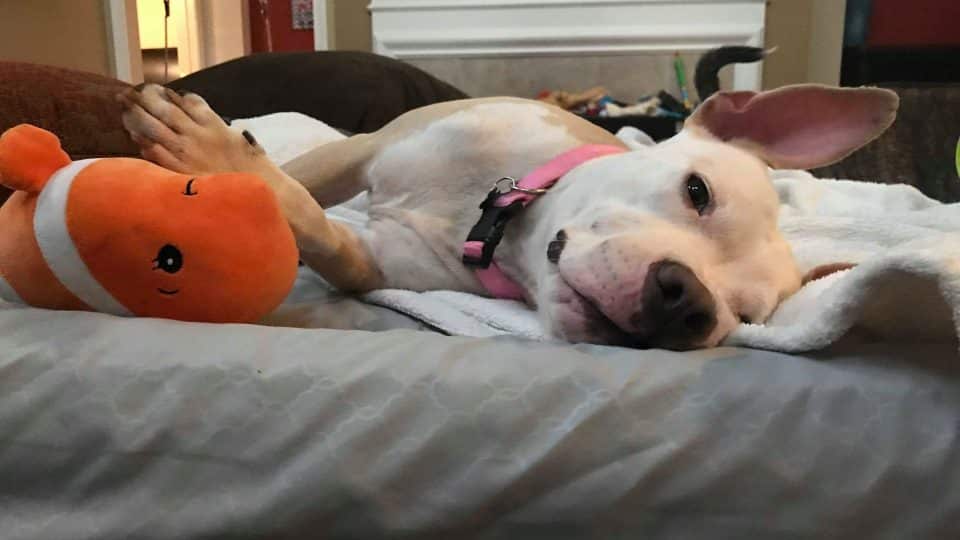 In a field next to a rundown and deserted house outside Houston, a dog is chained up alone, emaciated, with no food or water in sight.

But she has 2 things going for her— a cozy homemade dog house provided by Houston Huts 4 Mutts, and a social media platform.

Thanks to Huts 4 Mutts, dogs like this one are provided with the minimum necessary resources to survive, and for a lucky few, a foster home to get back on their feet, and eventually a forever family and a second chance at the good life.

Houston Huts 4 Mutts is a non-profit that provides shelter and minimum care for dogs kept outdoors. The organization works with owned dogs who need aid, abandoned dogs, and works to capture, spay, and rescue feral dog moms and their puppies too. When possible, they reach out through their Facebook page to find foster homes for the dogs who need it most, but as founder Aliesha Medley says “we have thousands of dogs living like Daisy that could be saved with fosters.” 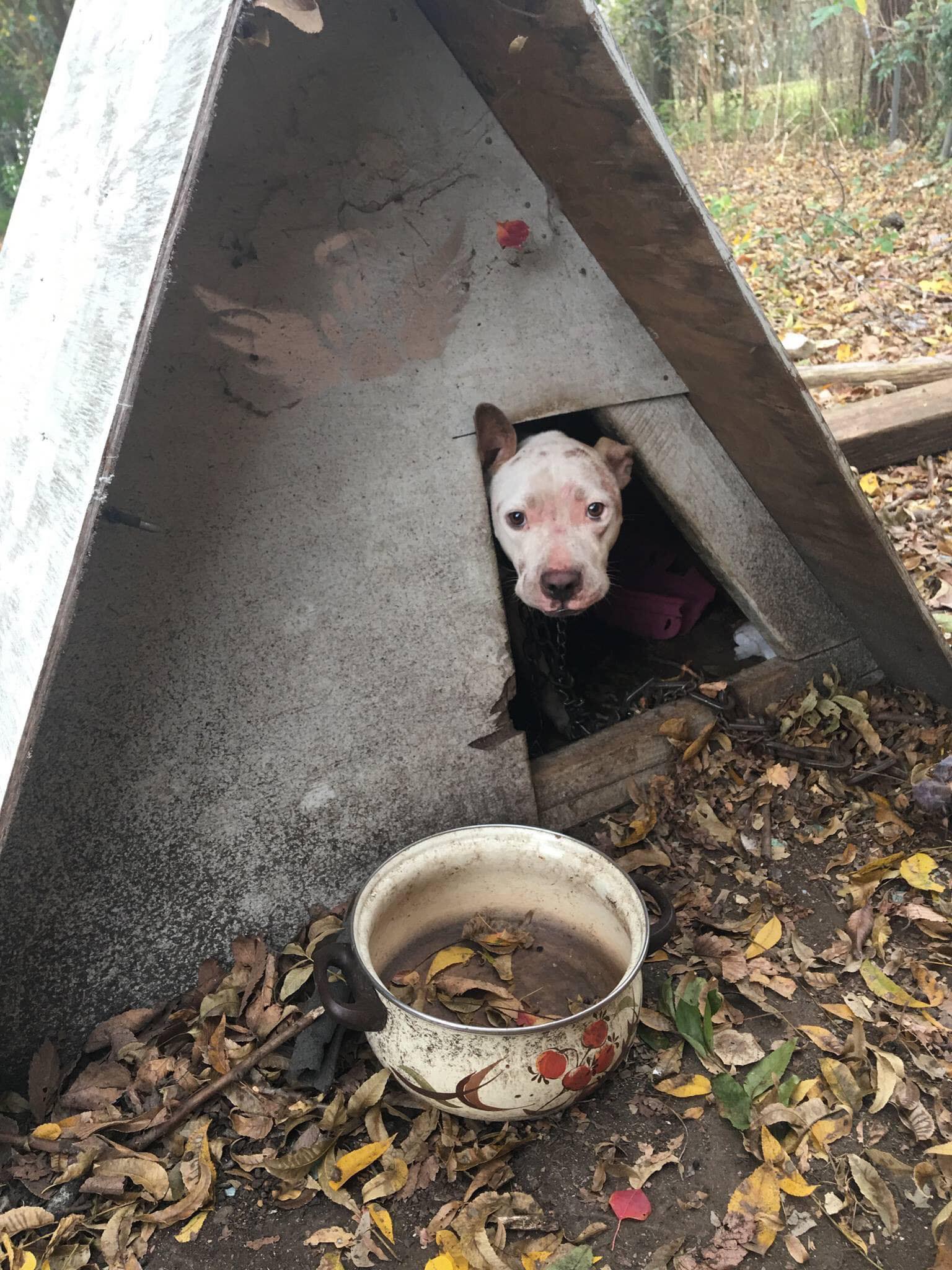 As you read Daisy’s story, remember that she is the lucky one. For every Daisy who gets that second chance, there are thousands of abandoned dogs out there, waiting for someone to open their hearts and homes to foster a dog in need.

It was this past December when Alaina Rosenblatt saw the call to action. A dog was abandoned in a field next to a deserted, rundown home in the Houston, Texas, area and needed help fast.

Rosenblatt, an independent animal rescuer, knew that the need for help was urgent and went with Medley to pick up the dog.

“When we pulled up to the house, the dog and house were way out in the field and I didn’t see the dog at first,” Rosenblatt said. “We approached and when she stuck her little head out of the dog house, it was so pitiful. I saw sores all over her face and she had a look of desperation.”

The dog was in terrible condition. She was emaciated and there was no food or water, just a filthy bowl nearby filled with dirt and bugs. It took a little while for the scared dog, who would later be named Daisy, to come out of the dog house, at which point they immediately gave her water. 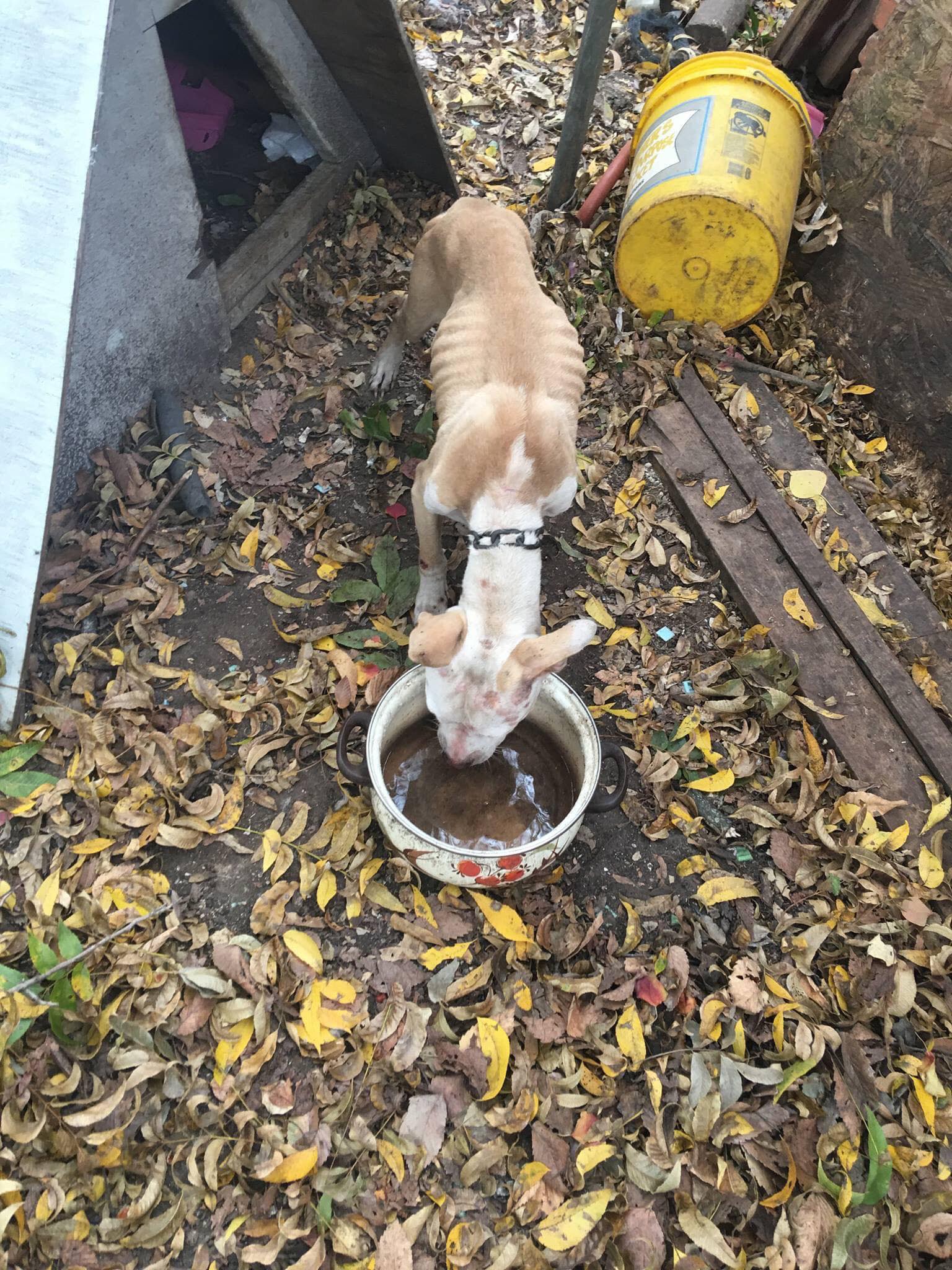 They videotaped the rescue and were live on Facebook, networking, and trying to find a rescue to take the dog. Local rescuer and foster, Stephanie Mackey, was watching and quickly offered to take in the dog. She received backing from Love and Rescue, an organization that took on the financial responsibilities and would help find an adopter.

After a much-needed drink, Daisy soon allowed Rosenblatt to touch her. “She was scared but I picked her up and she trusted me,” Rosenblatt said. 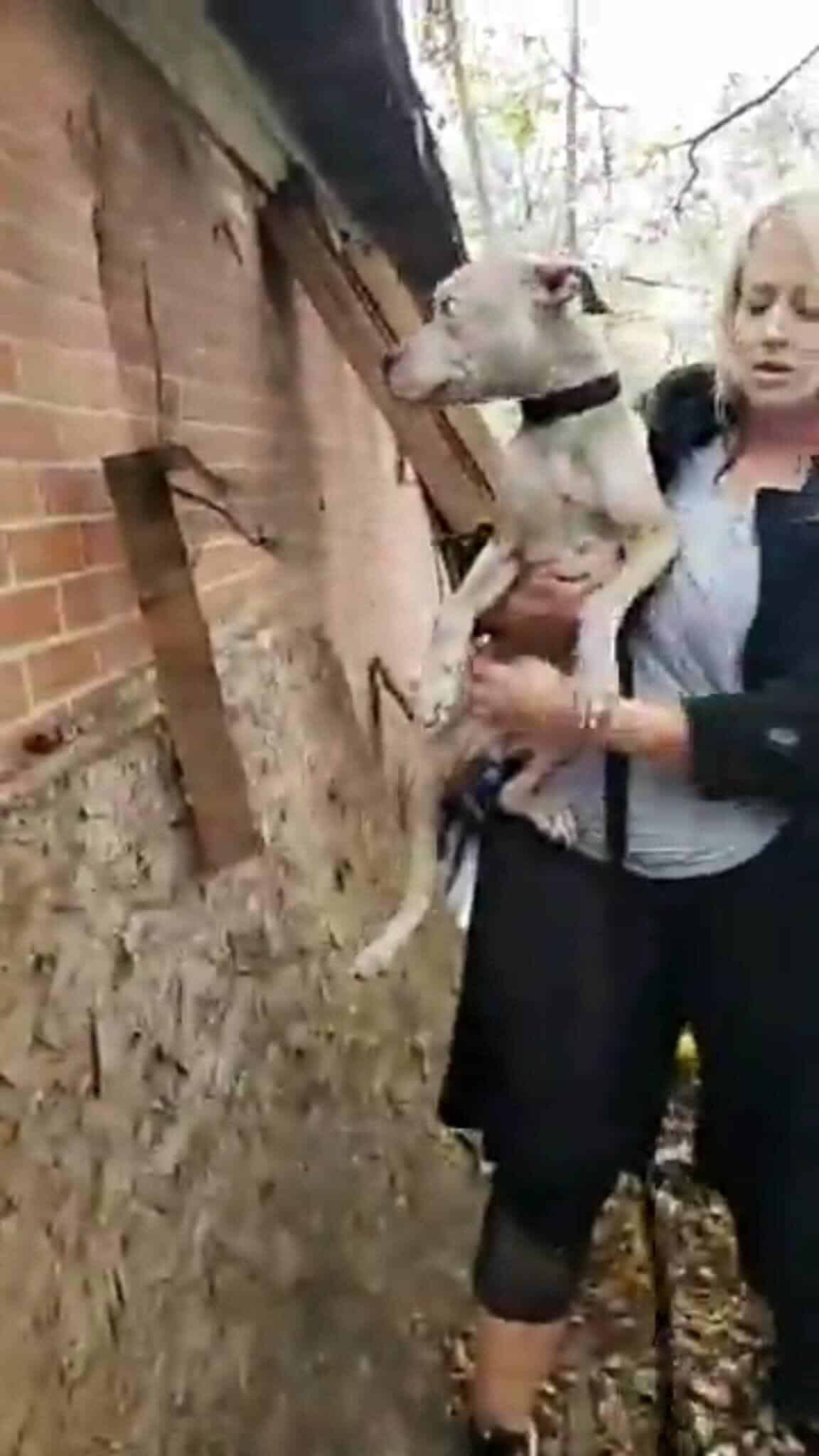 Rosenblatt and Medley knew they had to work fast because of Daisy’s frail condition. There were two thick double chains around her neck. They were very heavy, but somehow they were able to pry open the lock. Rosenblatt then slipped the chain off Daisy’s neck, picked her up, and rushed her to the van.

“The picture of Daisy looking back at her old house was as if she was saying, ‘Thank God I’m leaving.’ It was very emotional,” Rosenblatt said. “She literally would have died out there if left alone. Most of the dogs out there don’t live very long. They either die of starvation or heartworm.” 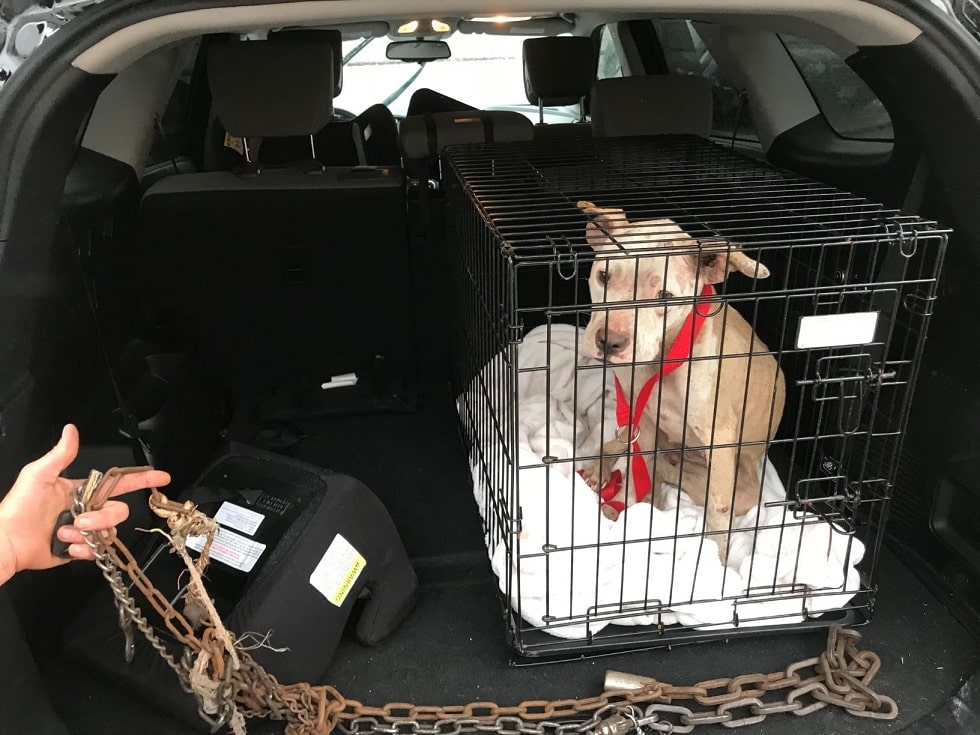 Leaving the Past Behind

Medley drove to meet Mackey in a parking lot to hand over Daisy. Mackey took Daisy directly to the vet where she weighed in at 26 pounds. The chains around her neck weighed 13 pounds. She was estimated to be less than 2 years old and had previously had a litter of puppies.

Mackey was heartbroken by Daisy’s appearance and overwhelmed because the dog was bigger than she expected. 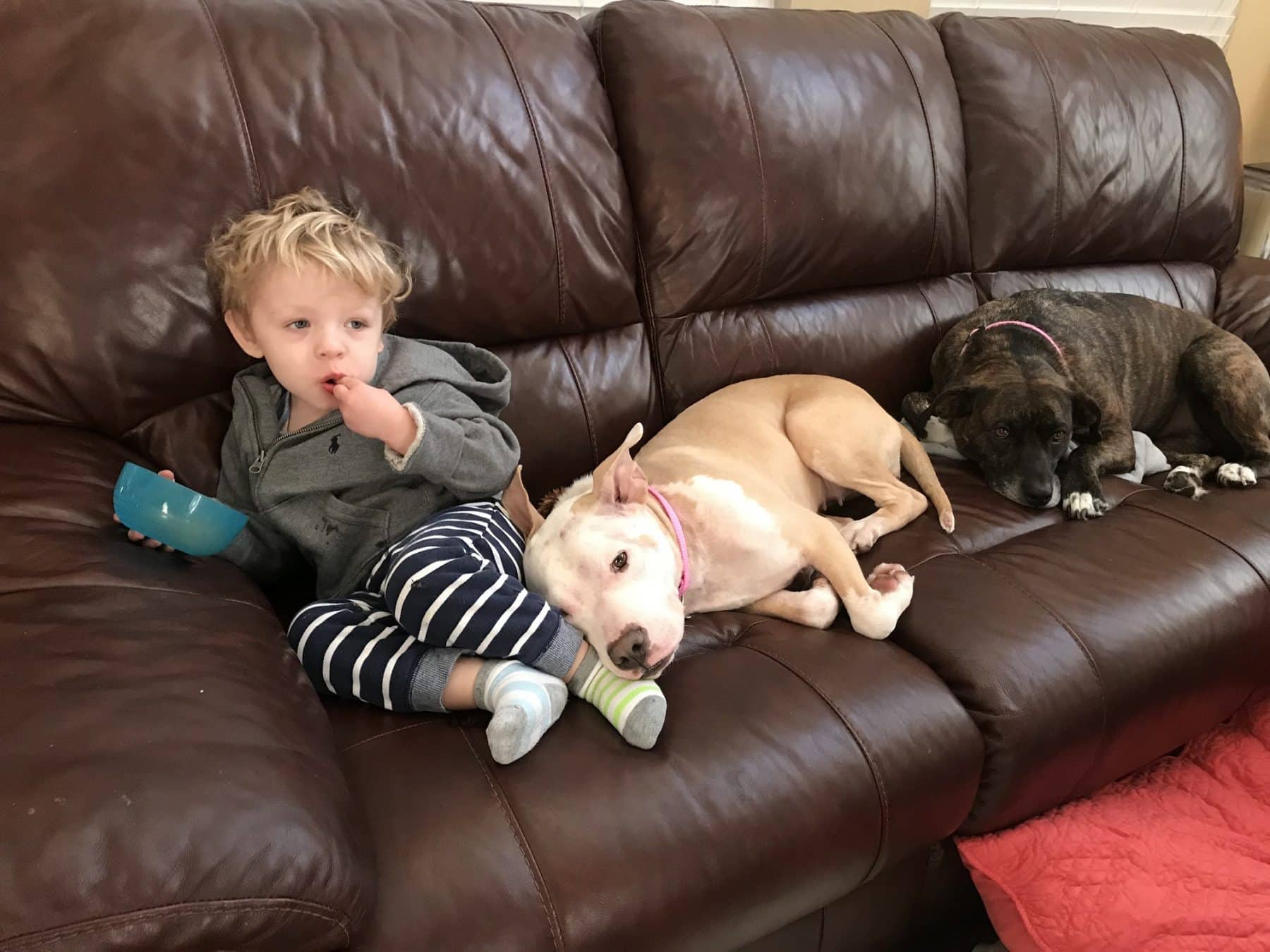 Daisy had extreme worms, was severely emaciated and dehydrated, but she was surprisingly heartworm negative. She had sores on her body from lying in the same position, an embedded chain scar, and injuries from biting flies. She was sent home with numerous medications.

“She gained 8 pounds in the first week with me,” Mackey said. “She was pretty healthy but literally had not been fed or given water. She had been completely neglected.”

Daisy had been disregarded and was scared and withdrawn. “Every time I approached with food or water she cowered and was afraid I was going to hurt her,” Mackey said, adding that she started to panic.

“I called Aliesha (Medley) and said, ‘I have a huge pit that was chained and I think I bit off more than I could chew,’” she recalled. Medley advised that a chained dog’s true temperament doesn’t show for about two weeks. She advised Mackey to take it slow.

“She gave me a reality check,” Mackey said. “You never know what you’re going to get, and I appreciate that I took a chance on the dog.” 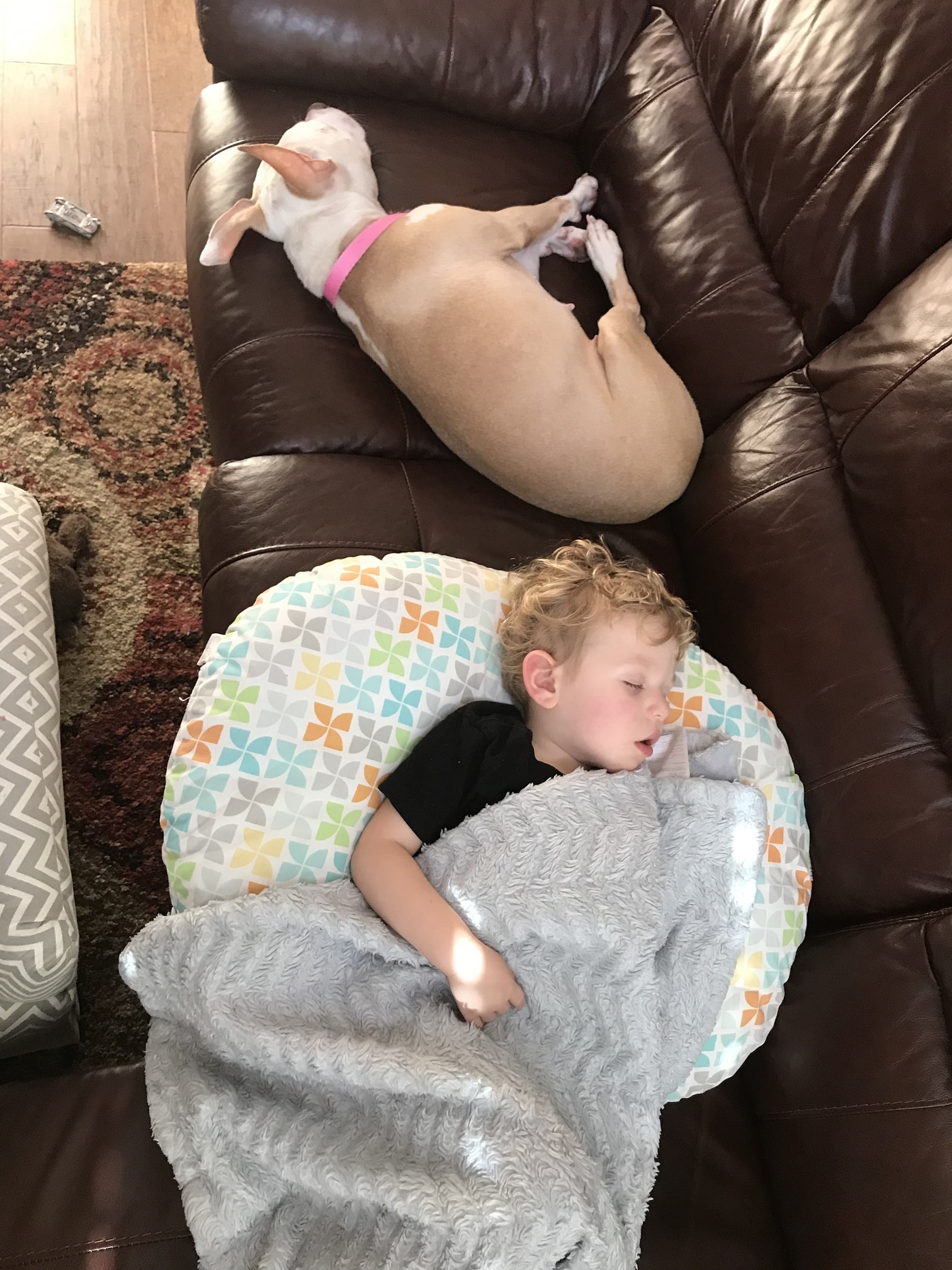 It wasn’t long before Mackey saw Daisy’s true nature. The hesitation from day one was gone by day two. “I lucked out with her being the most perfect dog,” she said. “I looked into her eyes and felt a connection right away.”

It was easy to see that Daisy not only bonded with Cooper, Mackey’s toddler, but also with her husband who would call Daisy onto the bed along with their four other dogs. “My husband is such a cuddler with dogs,” Mackey said.

Finding an adopter for Daisy was something Mackey didn’t want to think about. But she knew she couldn’t keep Daisy forever because she had her hands full with four dogs and a toddler.

But the perfect home for Daisy came in the form of a friend. A best friend.

Emma Gardner was Mackey’s maid of honor at her wedding. They went to college together, and both shared a love of pit bulls. Gardner had a rescued blue pit named Dubs who died last year. “She was hesitant to get a new dog,” Mackey said. “Emma said she was looking at Daisy. However, she was still grieving so I didn’t push it.” 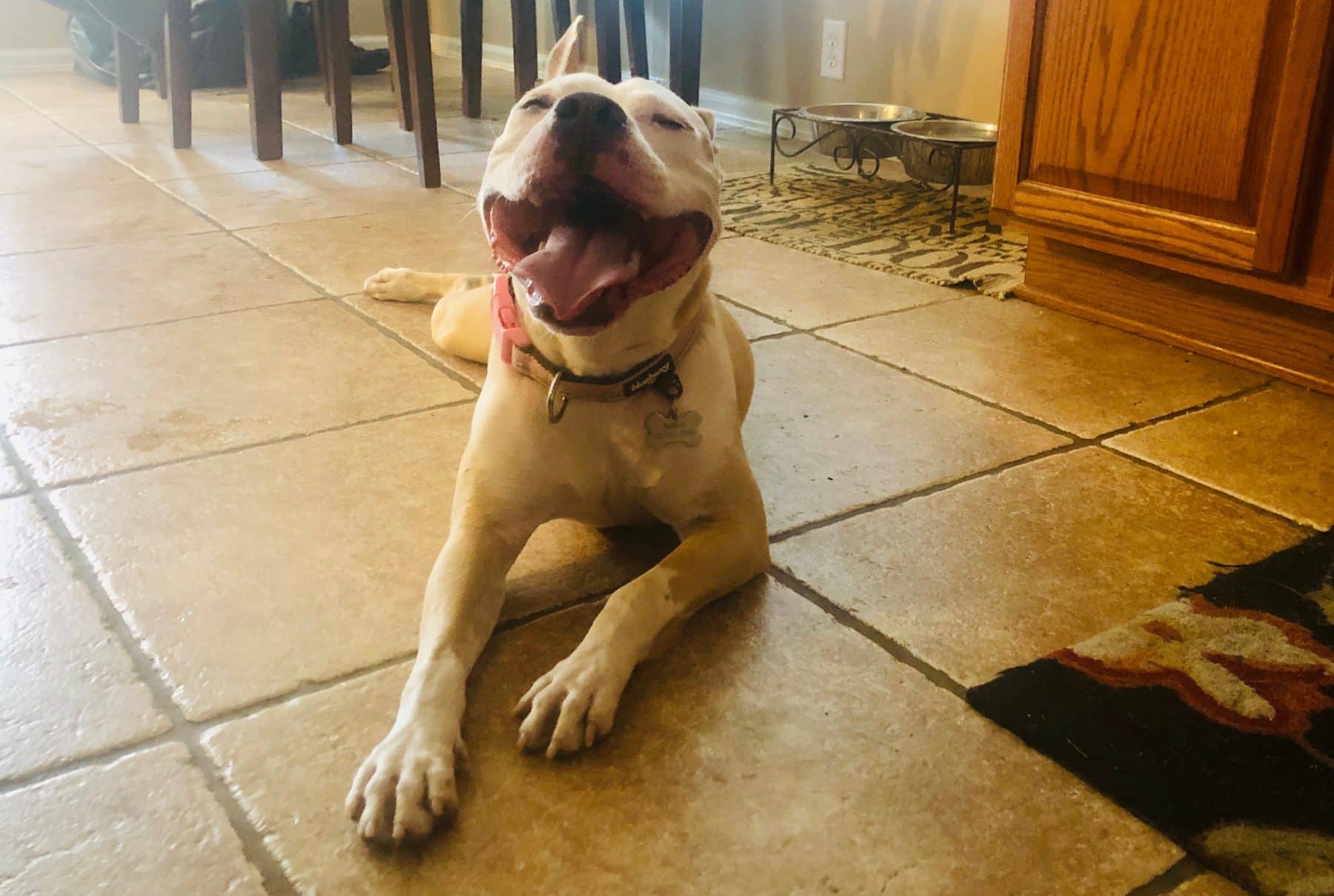 This past April 1, Mackey received a text from Gardner asking to come by to meet Daisy. She wanted to bring her boyfriend and his dog Samson to see if the two dogs got along.

They drove from Austin to Houston. The dogs got along perfectly well. However, Mackey doesn’t like to finalize adoptions until there’s a trial sleepover week, so they went by the books to be sure it was a good fit for everyone.

“After a week, the rest was history,” Mackey said. “I cried like a baby. I’ve never been so happy to get a dog adopted. I wanted to keep Daisy so badly but five dogs would be too much for me with a toddler. It was such a relief.  Daisy had never shown aggression but lived on a chain for two years. And I wanted someone who would respect her past and respect her breed so she would not be put in any situation where a bad choice would be made by accident.”

Daisy’s new home is perfect. Gardner sends pictures of Daisy cuddling with Samson who had been depressed after Dubs died and then gained 20 pounds. Since Daisy was adopted into their family, he’s lost 10 pounds.

“She saved Samson, too,” Mackey said. “He needed a buddy. They love long walks and they are inseparable.” 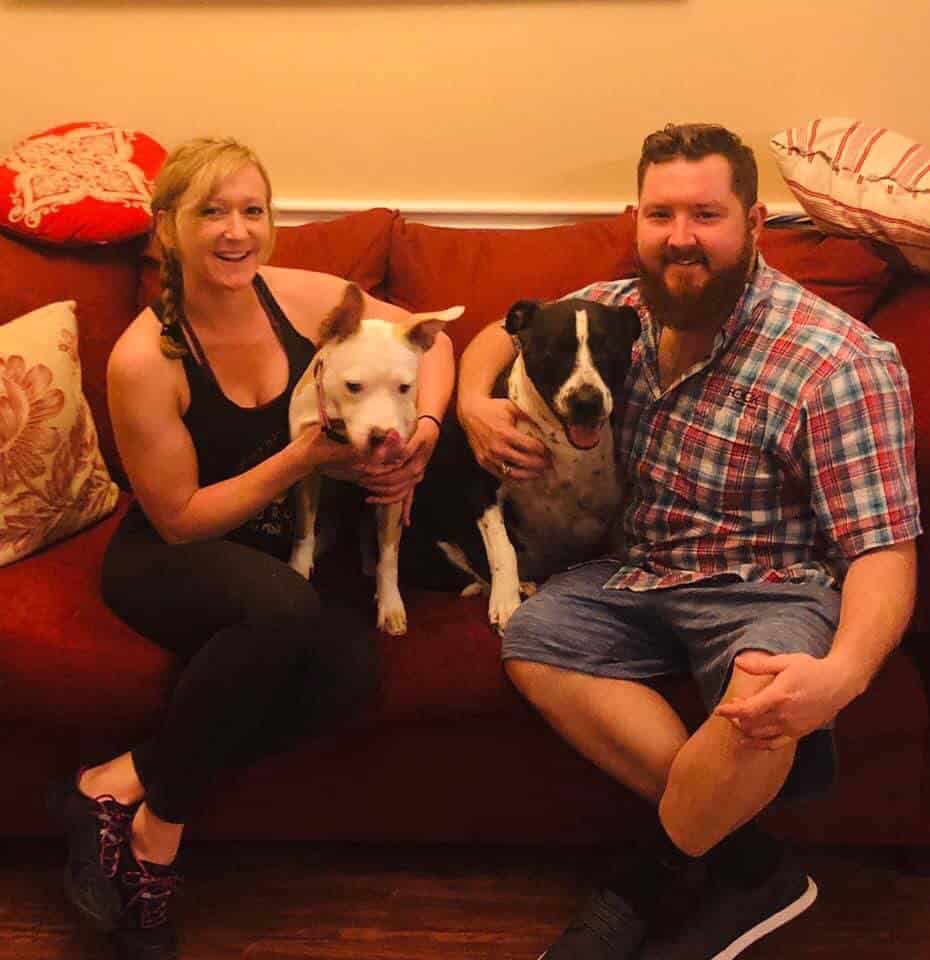 That’s the kind of fairy-tale ending Rosenblatt likes to see. She saves roughly two to three dogs a week and is in the process of working on getting her own nonprofit.

“I couldn’t keep going if I didn’t see that,” Rosenblatt said. “That’s the reason I love to see the progress. The transformation is amazing. If it wasn’t for the local Houston rescue community, dogs like Daisy would not have a chance.” 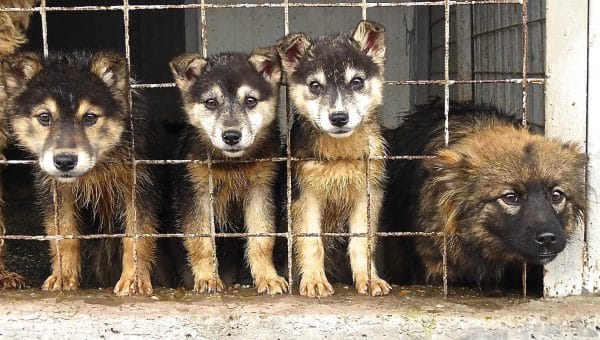